Covering everything from irons to woods, the game’s best to those that need more than a little help; Cobra’s newest line-up has something for everybody.

Cobra Golf may not have the largest tour staff, but a couple of the names that they have are big ones. Between the likes of Rickie Fowler and Lexi Thompson, the company has successfully transformed themselves from the brand that “old guys” play to one that is more appealing to the younger golfer. This transformation really began with the release of the AMP product line a few years ago, and since that time, the company has followed those up with the AMP Cell and BioCell clubs. Now it’s time to replace that line-up once more. Building off the success of last years BioCell line, which got great reviews here at The Sand Trap, is the new Fly-Z line. With an array of different products ranging from drivers and woods to hybrids and irons, the Fly-Z has something for everybody no matter your need or ability level.

For drivers, consumers will have the choice of the standard Fly-Z driver, the Fly-Z+, or the Fly-Z XL. The standard Fly-Z driver features the company’s E9 Face technology as well as a low CG position to increase the MOI and increase forgiveness and distance. In order to move the CG so far back, the company created “Crown Zones” in which they removed weight from strategic areas of the crown; this weight was then repositioned low in the club with the aid of an interchangeable weight which users can swap out for different sizes. According to Cobra, this is their most forgiving and longest driver to date. The club also uses the MyFly8 Technology in which the adjustable hosel allows the golfer to choose eight different loft options ranging from 9° to 12°, some with “Draw” options. 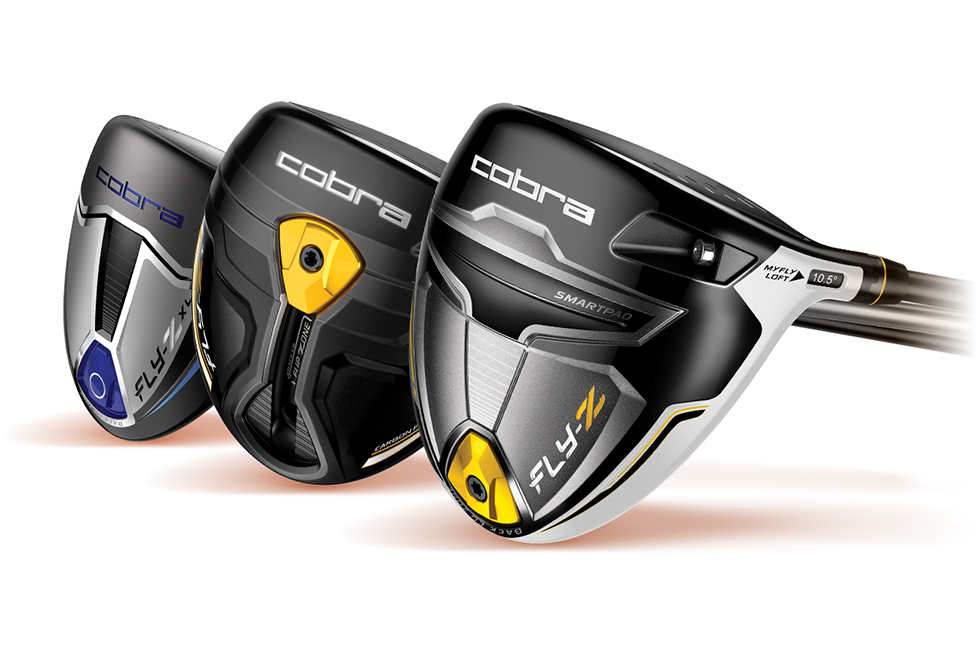 For the better golfer, there is the Fly-Z+ driver. Over the last few years, there have been debate on whether the CG of a club should be forward or back to produce the most distance, and with the Fly-Z+, you get to decide. The driver features a movable FlipZone weight which the user can put in the back position for increased carry or in the forward position for a more penetrating ball flight. The club features a multi-material construction using a titanium body and a carbon fiber crown as well s the company’s E9 face and MyFly8 hosel. The Fly-Z+ can be set at lofts ranging from 8.5° to 11.5°. 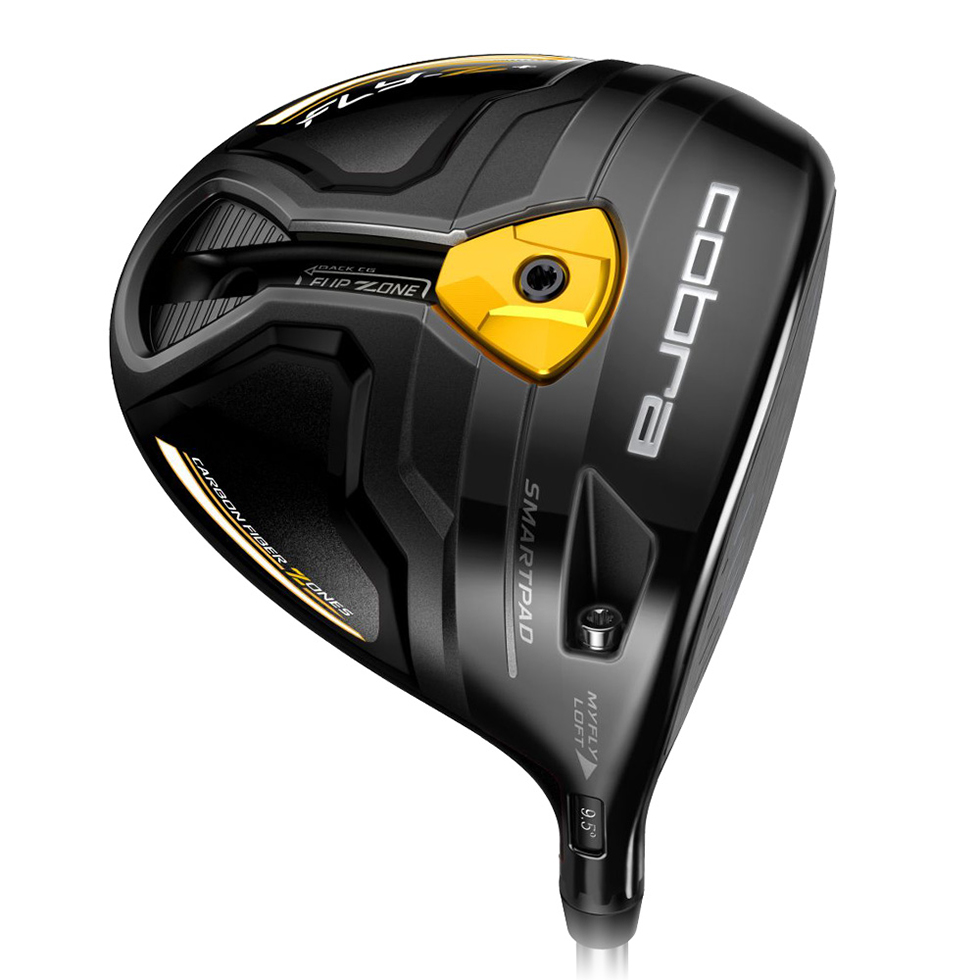 Both the Fly-Z and Fly-Z+ come with the Matrix VLCT as the stock shaft, although golfers have the option of free shaft upgrades to the Aldila Tour Blue or Green or Matrix White Tie on the Fly-Z+.

There is also a Fly-Z XL model that is aimed at the higher handicap golfer. The XL model has an offset design and low CG to increase forgiveness. Unlike the other two, the XL does not have an adjustable hosel and comes in lofts of 9.5°, 10.5°, or 11.5° and comes stock with the Fly-Z XL Graphite shaft.

Like the drivers, the fairway woods are available in three different models; the Fly-Z, Fly-Z+, and the Fly-Z XL. Both the Fly-Z and Fly-Z+ feature the company’s adjustable hosel. The standard model has the wight positioned low and back, increasing forgiveness and making it easier to launch, while the plus model has a forward CG to aid in a penetrating ball flight that has more roll out. Both models are available in 3/4 and 5/7 models and have the same Matrix VLCT stock shaft. The Fly-Z XL fairway follows in the footsteps of the driver and features an offset design with a CG configuration built around forgiveness. It is available as a 3W, 5W, and 7W (16°, 19°, 22°), and comes with the Fly-Z XL shaft. 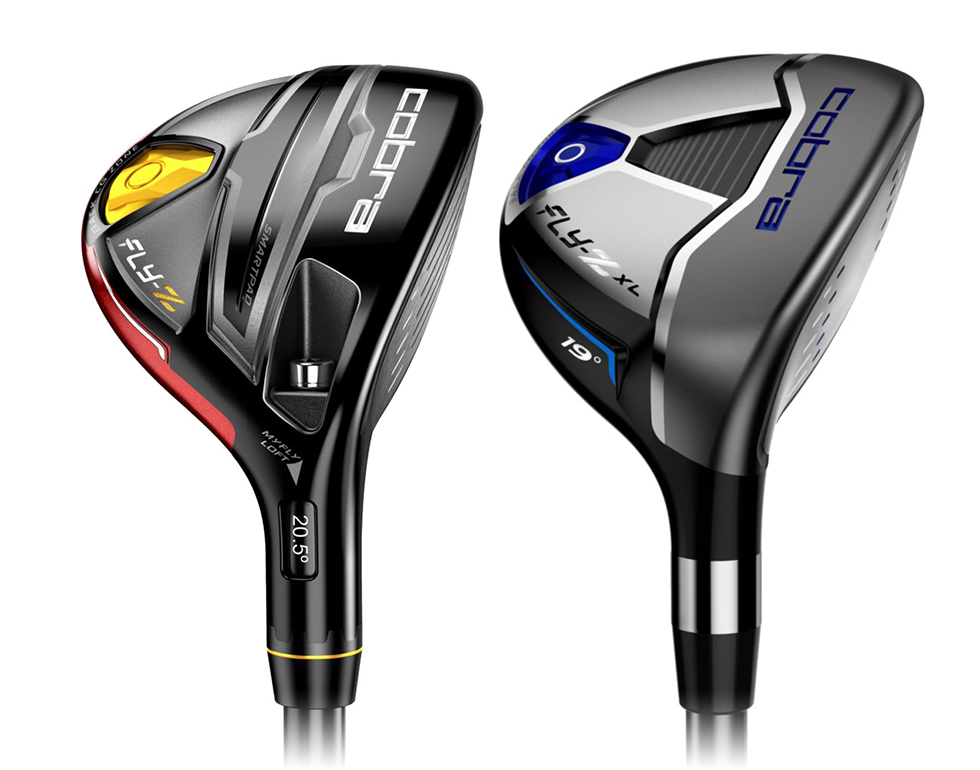 The hybrids are available in two different models, the Fly-Z or the Fly-Z XL. The standard model has the weight low and back making it an easy hybrid to launch. The new Speed Channel Face helps to increase ball speed on off center hits. The Fly-Z Hybrid uses the MyFly8 technology and can be had in 2/3, 3/4, or 4/5 models with the Matrix VLCT Altus shaft. The XL model looses the hosel adjustability and comes in 3h-7h models. Like the driver and fairway wood, it also uses an offset design and uses the Fly-Z XL graphite shaft.

There are four iron sets in the Fly-Z line-up; the Fly-Z, Fly-Z Pro, Fly-Z+, and Fly-Z XL. The XL irons are the most forgiving of the four and feature an oversized, yet traditional shape. The 4-8 irons have a dual cavity; the one you can see as well as a hollow cavity in the lower section. This helps to give a lower and deeper CG. The 9-SW have a deep perimeter undercut which the company claims to add forgiveness and accuracy. The Fly-Z XL come in 4-GW sets in either steel (KBS) or graphite (Fly-Z XL) shafts.

The standard Fly-Z irons introduce a new technology to Cobra irons; the Speed Channel, a trench that runs across the club’s sole and around the perimeter of the back cavity. This channel minimizes face thickness and produces a more pronounced flex and recovery at impact leading to faster ball speeds. Like the short irons of the XL model, the Fly-Z irons have a deep perimeter undercut. There is also a Harmonic Cavity insert, the purpose of which is to dampen vibrations at impact and lead to greater feel. This set is also available in 4-GW and comes with steel (KBS) or graphite (Matrix) shafts.

For the better golfer, there are two options; the Fly-Z+ or the Fly-Z Pro. The pro model has a progressive design with the long irons (3-6) having a dual cavity, the mid irons (7-8) a single cavity, and the short irons (9-PW) a full muscle back design. The clubs are constructed using a five step forging process that delivers a soft but solid feel at impact. Even though they are essentially blades, there is still some technology here as the club uses a high density tungsten insert in the toe to move the CG out from the heel and place it behind the impact zone. The clubs use a tour proven blade shape and were developed with the help of Rickie Fowler. The clubs come in 3-PW sets with the True Temper Dynamic Gold S300 as the stock shaft. There is also a 2 iron and GW available. 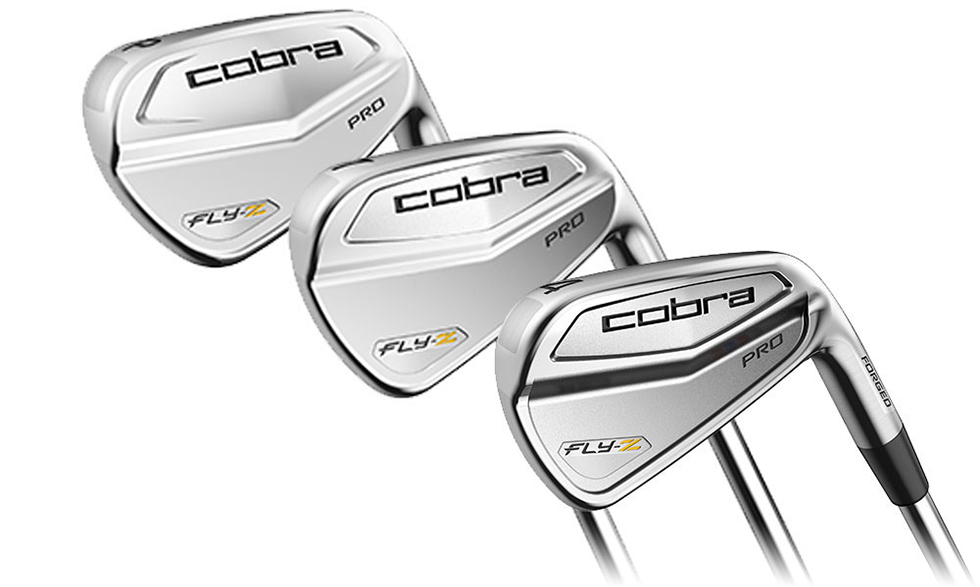 The Fly-Z+ irons have a multi-material forged construction. Tungsten weights are placed in the heel and toe to properly position the CG behind the impact zone. The long irons in the set are built to launch high, while the short irons allow for more accuracy. The clubs also use a Vibration Damping system in which a lightweight aluminum backplate is encased in Thermo Plastic Rubber to proved a soft and solid feel at impact. The clubs are available in 3-PW sets with the KBS Tour steel shaft.

Obviously, there is a lot to choose from here; but one thing is for sure: no matter what your needs as a golfer, Cobra has something that will fit your game.