The anticipated “conforming” Vokey wedges and updated AP1 and AP2 irons should be hitting stores soon. Here’s a sneak peek.

You may have seen coverage (here and here) of Titleist’s fall lineup here on The Sand Trap , but until recently, a release date had not been announced.

This November 15th, Titleist ends the year on a high note with the release of the newly revised AP Series irons, as well as some new wedges from master wedge craftsman Bob Vokey. They follow that up in mid-December with the new MB and CB irons, and new putters from renowned flatstick sculptor Scotty Cameron.

Following the recent trend, we’re going to break this release into two parts for your reading pleasure. This week, we’ll have a look at the updated revisions to the AP line, along with the new, conforming, Vokey wedges. Then stay tuned for next week, when we’ll visit the new MB and CB players irons, as well as Scotty Cameron’s latest flatsticks.

Before we look at the new AP irons, let’s just start out by throwing the term “game improvement” out the window. Zach Johnson, Nick Watney, Ben Curtis, and many other Titleist Ambassadors play every week with AP irons. The fact of the matter is, no matter what your skill level, these Advanced Performance irons can be of benefit for both high- and low-handicap players.

Let’s also discard the notion that simply because the irons say “Titleist” that they can’t be played by the bogey golfer. Though the AP1, for example, is used by the occasional PGA Tour player, we’ve also found them quite suitable for the 10- to 18-handicapper who values good looks and great forgiveness with a lot more feel than you might expect.

“Advanced Performance” Overview
With all of that out of the way, it’s time for the good stuff. According to Steve Pelisek, GM of Titleist Golf Clubs:

Both the AP1 and AP2 underwent refinement this year, and the differences are immediately visible, but before we check out the differences let’s see what remains the same. The general design concepts are the same as the originals (which is a good thing). The multi-material, dual-cavity design has been maintained, along with the dual hosel lengths and progressive offsets.

Among the new tweaks common to both sets is the new Tuned Feel System, which improves the sound and feel of the new AP line by introducing a co-molded medallion of soft elastomer and aluminum plating. Also, as expected, the grooves do conform with the 2010 Conditions of Competition. But so did the previous models (reviewed here for AP1 and here for AP2).

New AP1
The cast 431 stainless steel head and tungsten nickel sole are retained in these models, though the new Tuned Feel System is one of the many things that sets these apart from last year’s AP1. In addition to the Tuned Feel System, the aluminum and elastomer face is now thinner, with a larger cavity in the back, which leads to a hotter and more active feeling face. 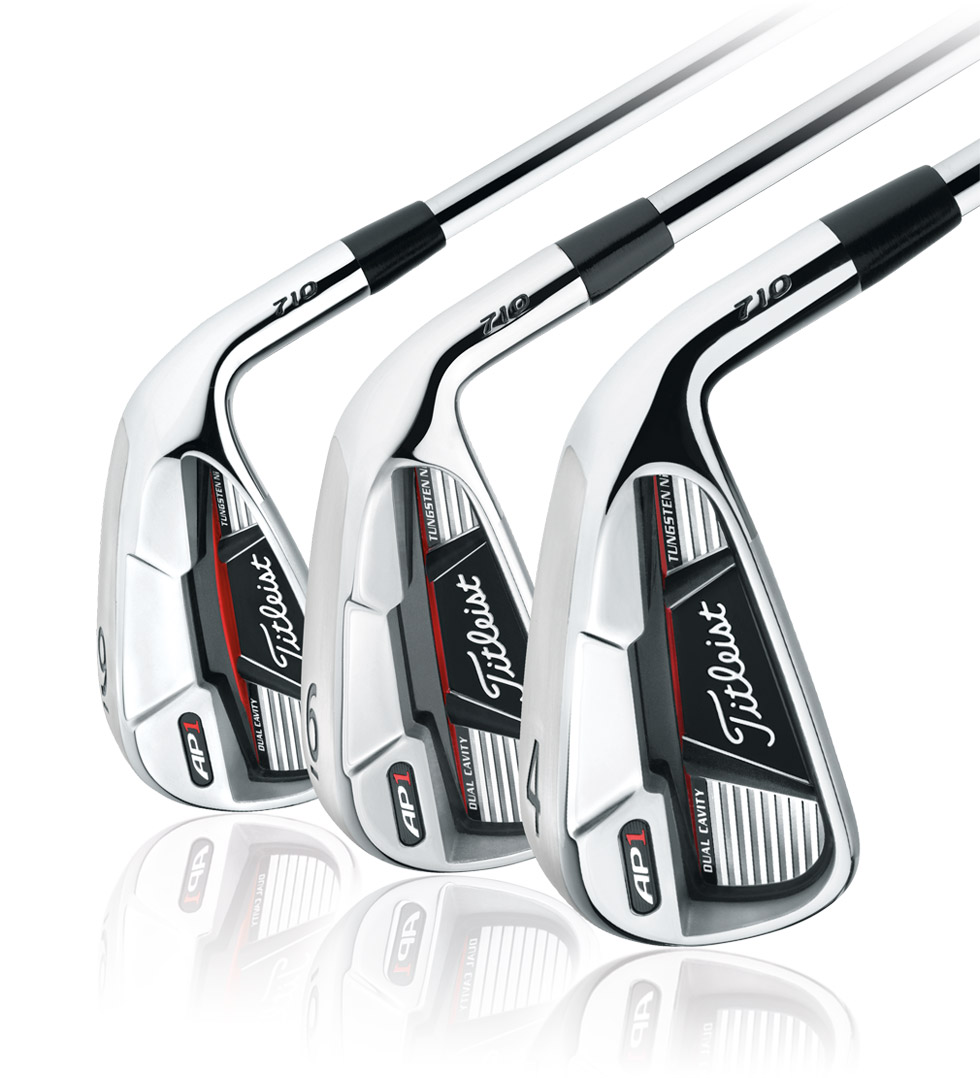 Keeping with the trend of improving the feel, the AP1 reduces low frequency vibrations via the use of a tungsten nickel sole bar. This sole bar, along with a perimeter-weighted back flange (the notch in the back), keeps the CoG low and deep so that MOI, forgiveness, and stability is increased in comparison last year’s model. Looking down at the 701 Series AP1, you will also see that the blade length is shorter, the topline is thinner, and the offset has been reduced. 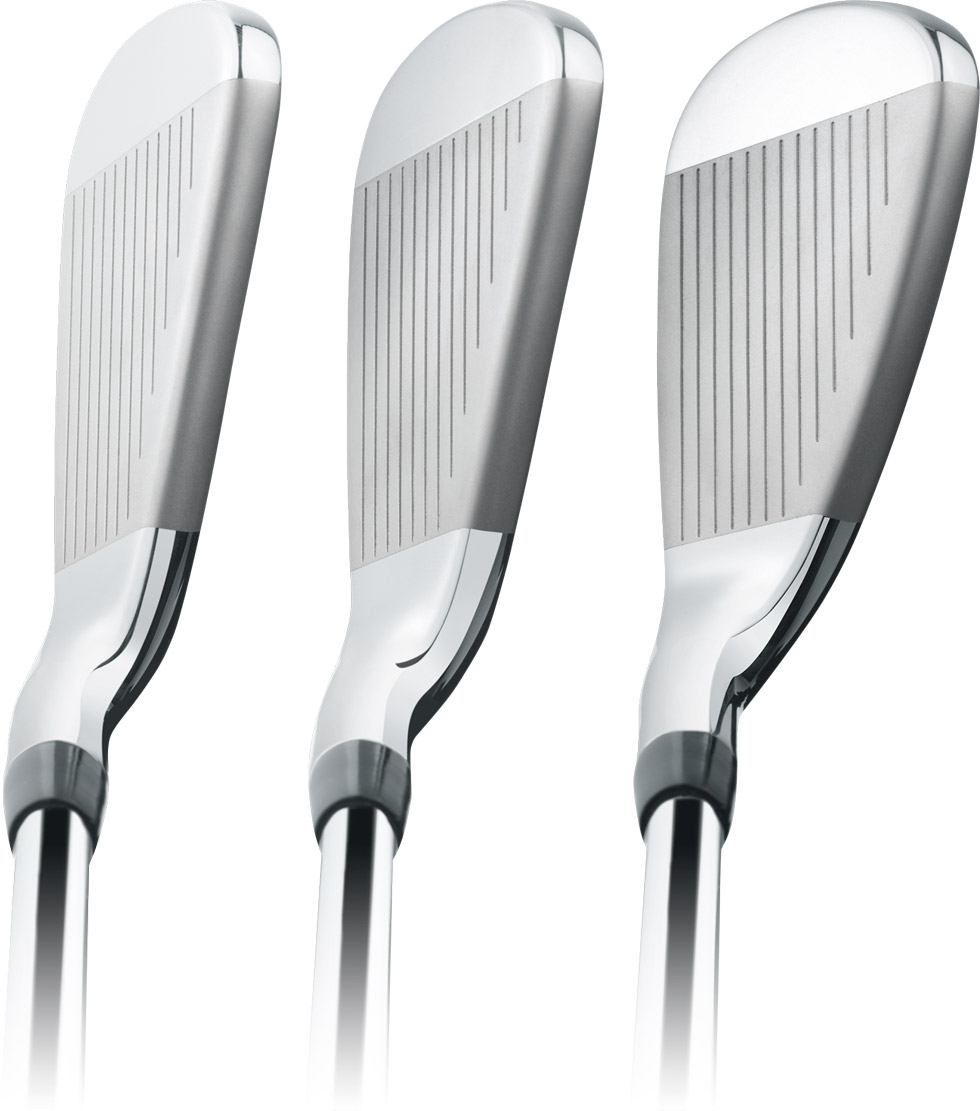 All of these design changes help the player have a greater degree of control and workability, while maintaining the traditional look players are accustomed to. The previously mentioned usage of dual hosel lengths assist in shifting the weight a little lower on the long irons, by the use of a shorter hosel, in order to help launch the ball. Shorter irons thus have a longer hosel, a higher center of gravity, and a lower ball flight. 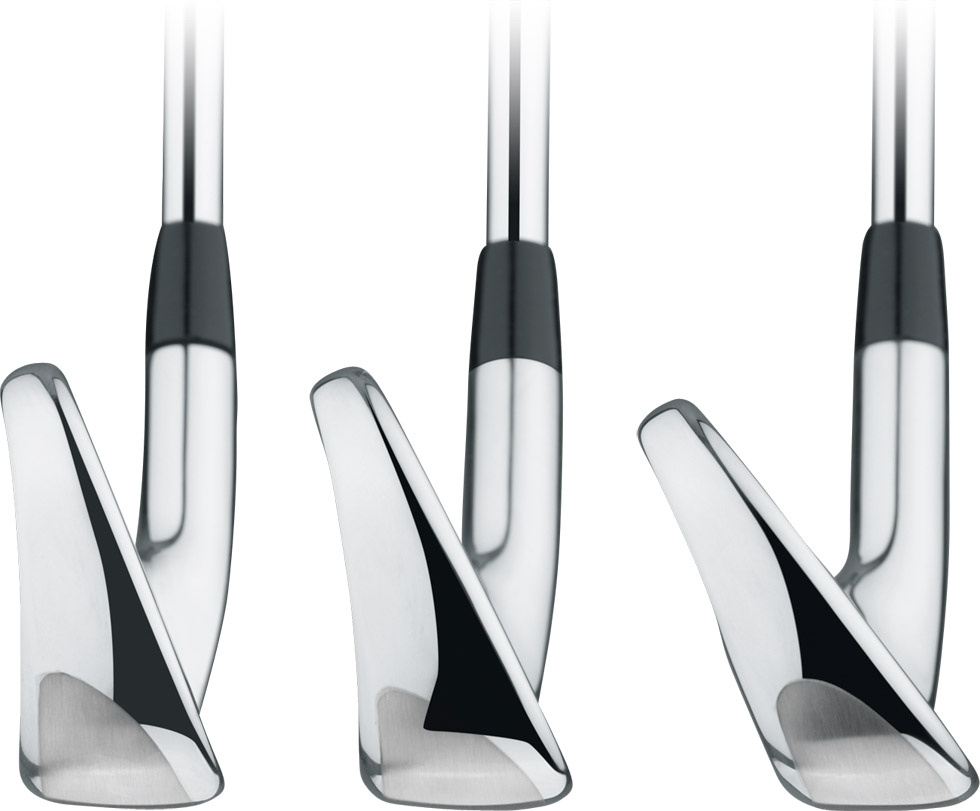 Options and Availability
Titleist also decided to deviate from the previous iteration of the AP1 by offering the Nippon NS Pro 105T as the stock steel shaft option instead of the True Temper Dynamic Gold HL. Though the stock steel changed, the graphite shaft option is still the made-for-Titleist Aldila VS Proto-T 75. Both come wrapped in the Titleist/Golf Pride Tour Velvet grip, but as usual, if you prefer alternate shaft and grip options, or if alternate lengths and lies are needed, a call can easily be made to Titleist Custom.

New AP2
Much like the AP1, the multi-material construction of the AP2 is generally the same as the previous iteration. The AP2 is still forged from 1025 soft carbon steel, and features the tungsten nickel sole found in the original AP2. Like the new AP1, the Tuned Feel System is one of the big differentiators in the new model. 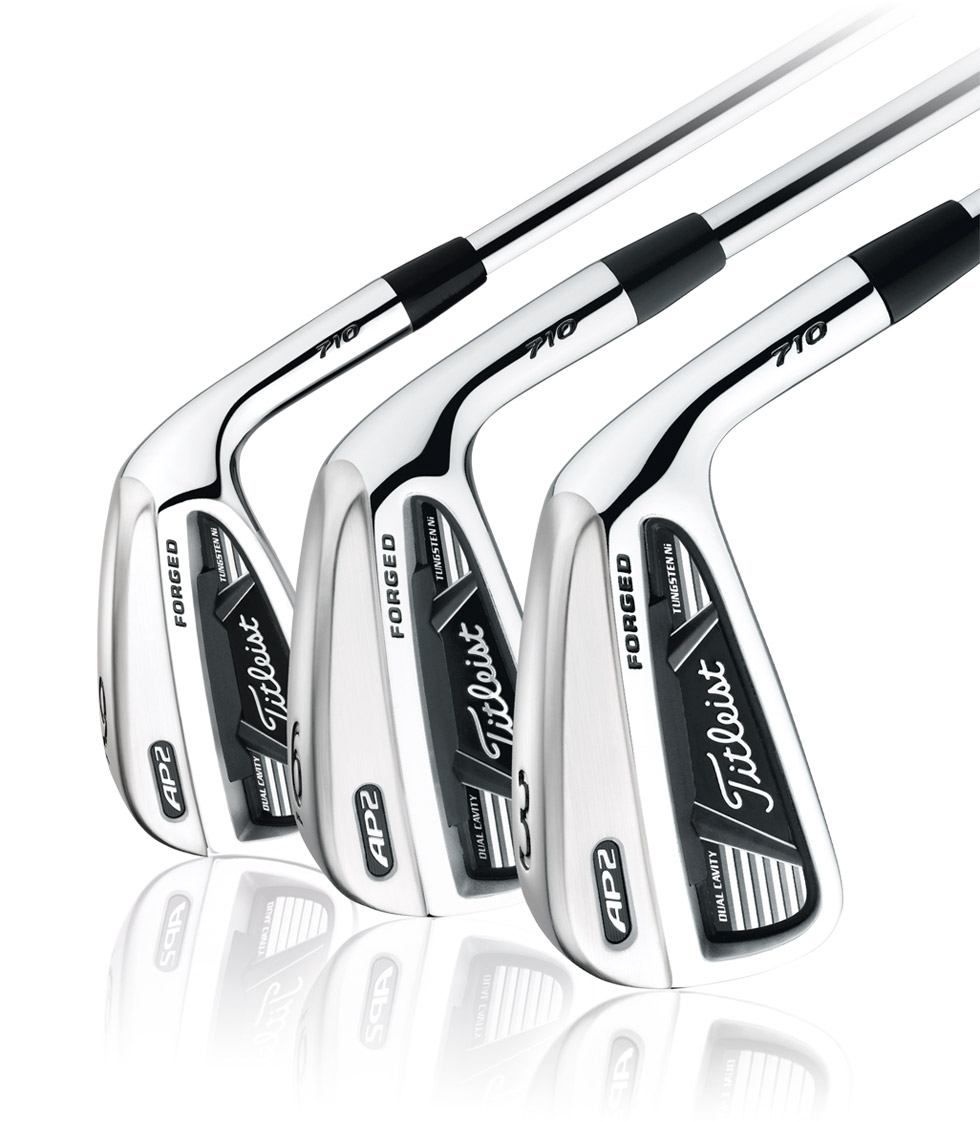 The appearance of the AP2 is very similar to that of the original, as to be expected. Looking down at address, the top line is slightly thinner which allow some weight to be pushed outside, providing that extra bit of forgiveness I mentioned earlier. Bounce was reduced one degree in the shorter irons to improve turf interaction. As with the AP1, the length of the hosel increases through the set, with the longer irons having a short hosel to assist in launch, and the scoring irons utilizing a longer hosel to help control the ball flight. 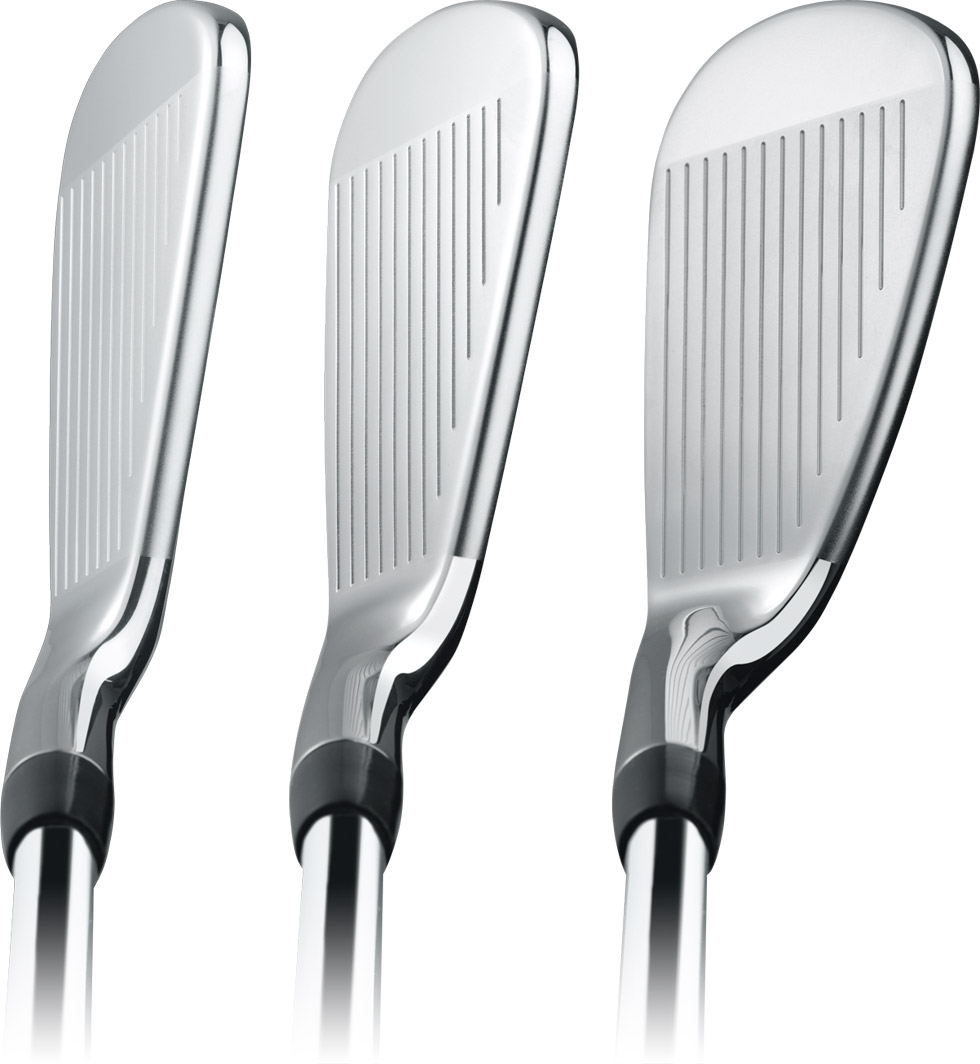 Options and Availability
The standard shaft in the AP2 irons is the True Temper Dynamic Gold – a shift from the Project X that was stock in the original AP2 – and is topped off with the proven Golf Pride Tour Velvet rubber grip. If you prefer a different shaft or grip, or you need modifications to the length and lie, Titleist Custom can take care of you. Expect each club to set you back $142 per club for the steel shafted models when the hit your favorite retailer on the fifteenth of November.

Vokey Spin Milled C-C
With the Conditions of Competition changing on January 1, 2010, I’m sure Titleist’s new wedges are generally one of the more anticipated releases of the year. The new Vokey Design Spin Milled C-C wedges (“C-C” stands for “condition of competition”) are the product of a collaborative effort between master wedge maker Bob Vokey and Titleist Golf Club R&D. They have undergone countless hours of player testing to ensure that, even though the grooves have changed, the player will have the highest level of performance available from their wedges.

As you can see in the image below, there appears to be almost no noticeable difference between the 2009 Vokey wedges and their C-C-grooved counterparts, with the exception of a gold paint fill in the Spin Milled Logo, and the C-C engraving on the hosel. They can also be identified by a sticker on the face, which states that the wedge conforms with the USGA/R&A regulations. I assume the intention is to make them look as familiar as possible, and I personally think it was a good decision. I also applaud Vokey and Titleist’s decision to be quite clear in their descriptions of the playability of the new wedges. Bob Vokey, Master Craftsman and Senior Product Development Manager, says:

The new groove standards will put more pressure on better players’ short games. It will be crucial for them to determine the most effective combinations of loft, bounce and sole grinds in their wedge set-ups. There is less room for error when players don’t have as much spin as they are accustomed, and they must be much more precise in their execution. 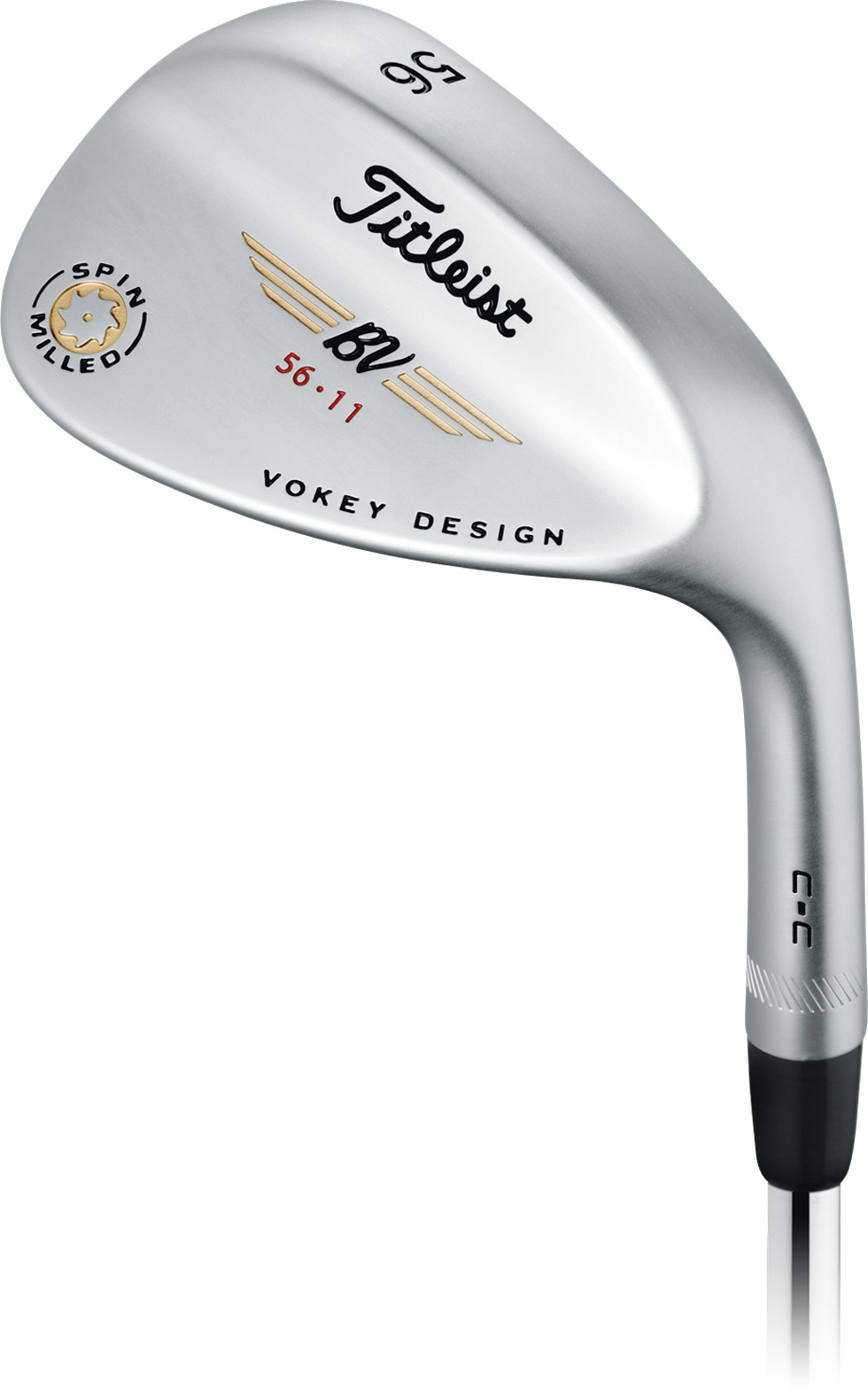 There’s no sugarcoating it – the new grooves have an substantial effect on the amount of spin imparted on the ball, and better players needs to step their game up to make up for it. Expect the new Spin Milled C-C wedges to produce a higher launch and less spin, with a bit more run-out than the previous models. In some cases this may be a good thing. How many times have you put an approach shot within a few feet of the hole, only to have it spin back too far, and put you into two-putt land? I’m not saying they won’t spin the ball, it just won’t be quite as much.

In terms of construction and material, the same 8620 milled carbon steel has been used for the 2010 models. At this time, there will be only one available finish – the non-glare Tour Chrome finish. The perfectly flat, CNC-machined face is grooved with a new cutting tool, which has a much tighter tolerance on both the edge radius and volume of the grooves. Still present are the micro edges used on previous models, which aid in creating friction and imparting spin, especially on partial shots.

Options and Availability
One of the reasons the Vokey wedges have been so popular is the multiple options available to fit any type of player. These are no exception, with 17 different variations available in nine different lofts, spanning from 48 to 64 degrees, and multiple bounce and sole grind configurations. Nine of those 17 will be available for left-handed players. The lone shaft option is the True Temper Dynamic Gold Wedge shaft, and it comes wrapped in the standard Titleist Tour Velvet rubber grip. As usual, if you need non-standard specifications, Titleist Custom can handle them. Expect to pay $125 for these when they hit stores November 15th.