We’re back with part two of our sneak peek at what Titleist has coming for us in a few short weeks, including new MB and CB irons, as well as new releases from Scotty Cameron.

Just as I promised last week, we bring you part two of our look at Titleist‘s soon-to-be-released clubs. If you missed last week’s installment of The Bag Drop, you might want to have a look at it, as we took a look at the updated AP irons and Bob Vokey’s newest conforming wedges.

If that left you hungry for more, or if you’re simply interested in the more classic irons that Titleist offers, look no further, as this week we give you the details on Titleist’s new-for-2010 MB and CB irons. As an added bonus for you putter aficionados, the new Scotty Cameron “California” family of putters also get the proper once-over.

Titleist has a long-standing tradition of making clubs for the skilled golfer who wants a clean, understated design that simply performs and provides the desired feel and feedback. It looks like the MB and CB irons do just that.

The feedback we received from this competitive and better player audience is that they want a compact blade length, minimal offset iron with solid feel and shot workability. Based upon the overwhelming positive comments from Tour players, club pros and competitive amateurs alike, the new MB and CB irons will please even the most adamant traditional iron enthusiasts.

While some may have balked at the appearance of the previous ZB/ZM offering, there should be no complaints about the two new models, as both should be pleasing to even the most hardcore traditionalist. The beauty of the new forged CB and MB irons is much more than skin deep though. Let’s start by taking a look at what’s new in the CB.

Forged CB Irons
The classic looks of the CB can be attributed to a number of qualities, which make it extremely visually appealing. The new irons are forged from 1025 carbon steel, and are covered in a beautiful chrome plating. 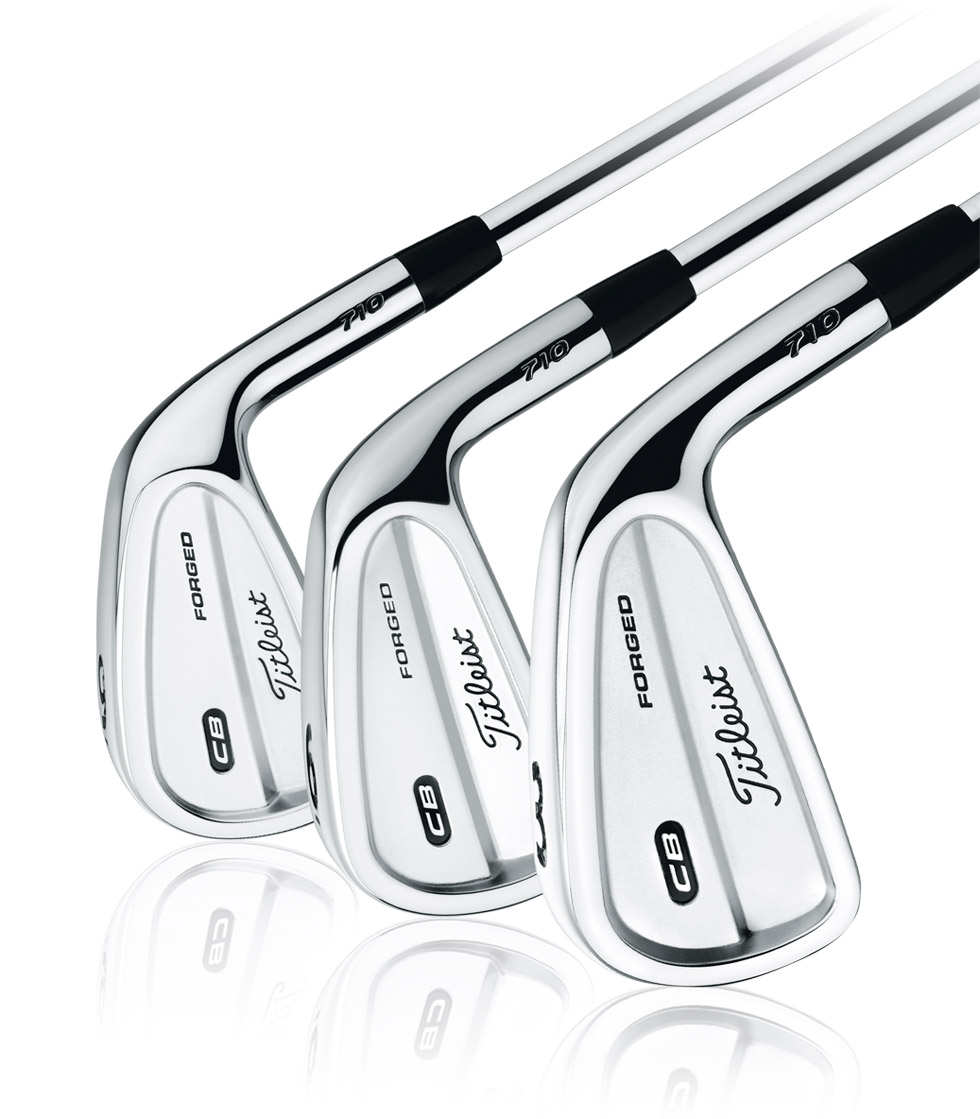 The face rolls off to a blunted leading edge and cambered sole, which allows the club to slide through the turf without getting stuck. As one can expect, the cavity is nearly devoid of any graphics, with only “CB,” “FORGED,” and the timeless Titleist script stamped on the back. At approach, the iron is capped off with a confidence-inspiring soft topline that gives it what Titleist calls a “classic but improved contemporary look.” 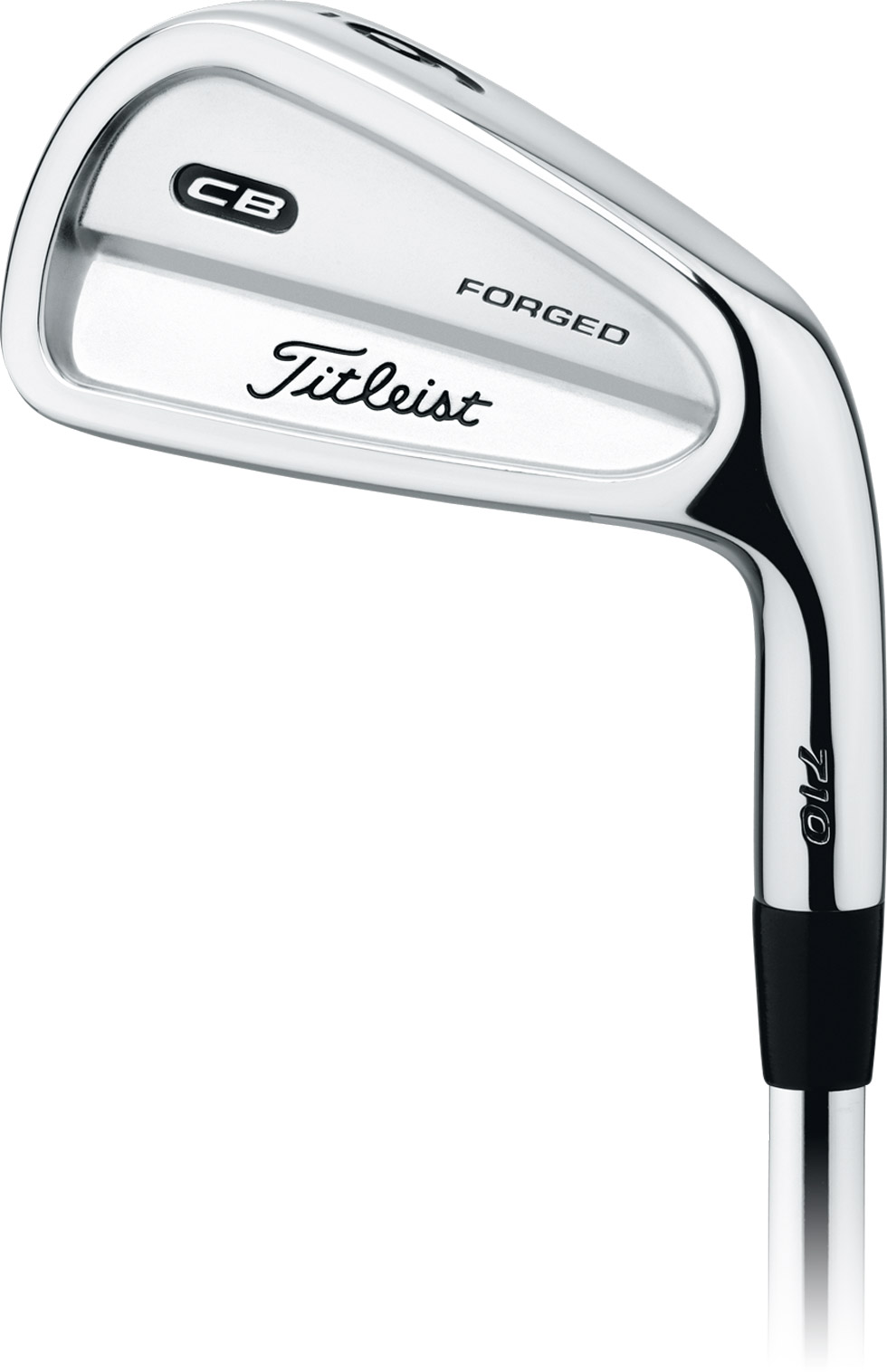 The soft feel of the CB comes from the additional weight behind the impact area, which is provided the optimized cavity muscle. Like the AP irons, the dual hosel lengths of the CB irons were designed to add or reduce weight for optimal ball flight for both long and short irons. The long irons have the shorter hosel, which helps to keep the weight low for a higher launch. 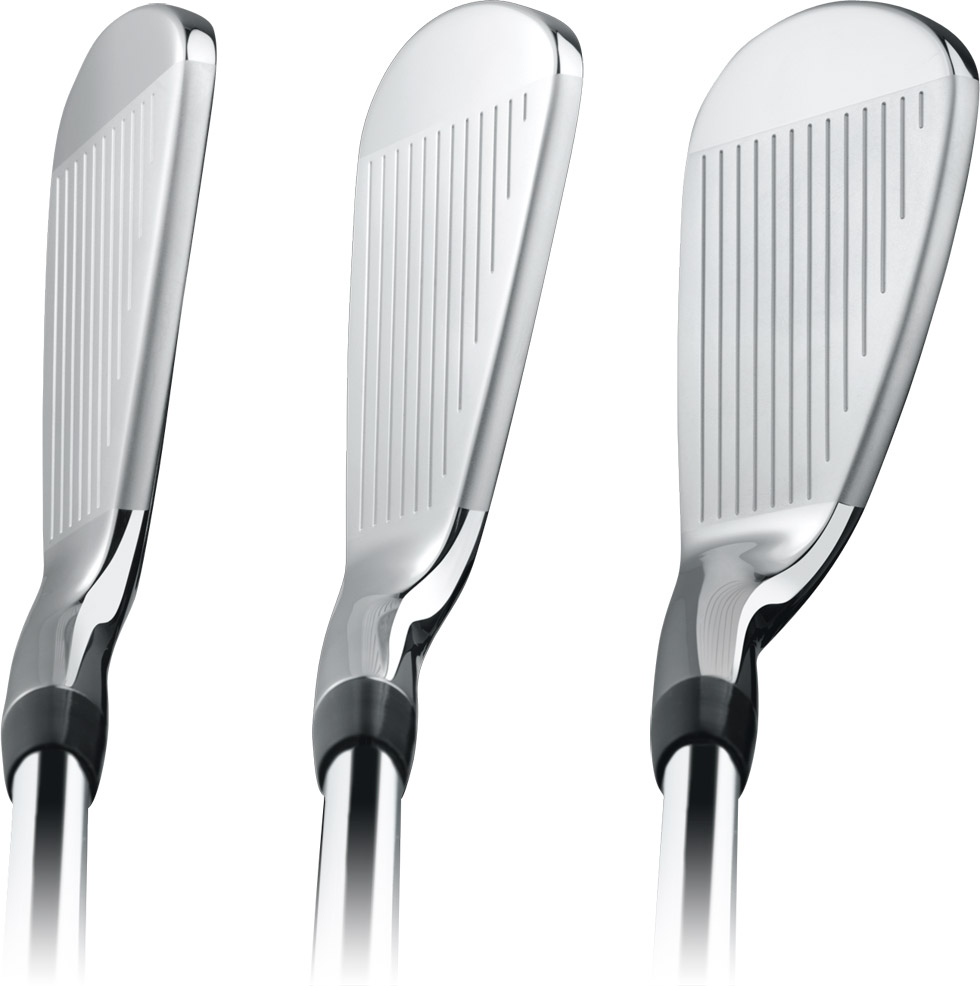 Though forgiveness isn’t a term generally synonymous with a blade like this, the CB is a bit more forgiving than the MB, thanks the MOI increase that comes with a cavity-back design. In addition to the added forgiveness, the long irons also have a lower center of gravity, which should help in achieving a higher ball flight when compared to the MB.

Options, Pricing, and Availability
Titleist chose the venerable True Temper Dynamic Gold steel shaft as the stock shaft. If that’s not your preferred shaft of choice, Titleist Custom has a wide selection of shaft options for you to pick from. Though the default grip is the Titleist Tour Velvet Rubber by Golf Pride, again, their custom shop can top off your new irons with your favorite grips. Length and lie can also be tailored to your specifications as well. The MSRP is listed at $135 (per club) for the CB with the True Temper Dynamic Gold steel shaft, while the standard graphite offering is set at $159. They are set to drop on December 1, 2009, and will be available for both righties and lefties.

Forged MB Irons
If you’re looking for the ultimate in shot control, the new forged MB irons will undoubtedly draw your attention. The muscleback irons are forged from 1025 carbon steel, and just like the CB, they’re coated with bright chrome plating for a gorgeous finish. 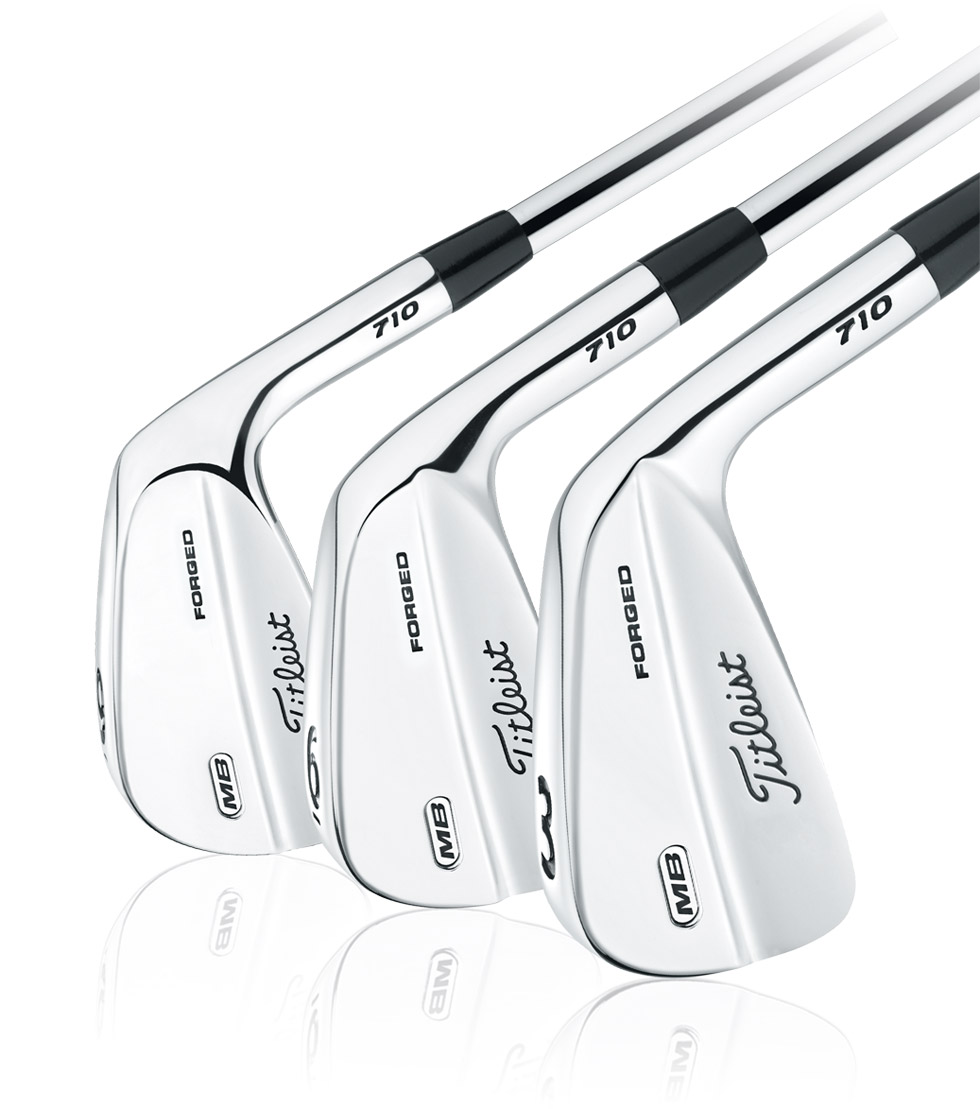 The MB and CB actually have quite a bit in common. Like the CB, the MB makes use of conforming V grooves on the face of the blade. Looking down at the iron, the soft topline and rounded profile looks very similar to that of the CB as well. 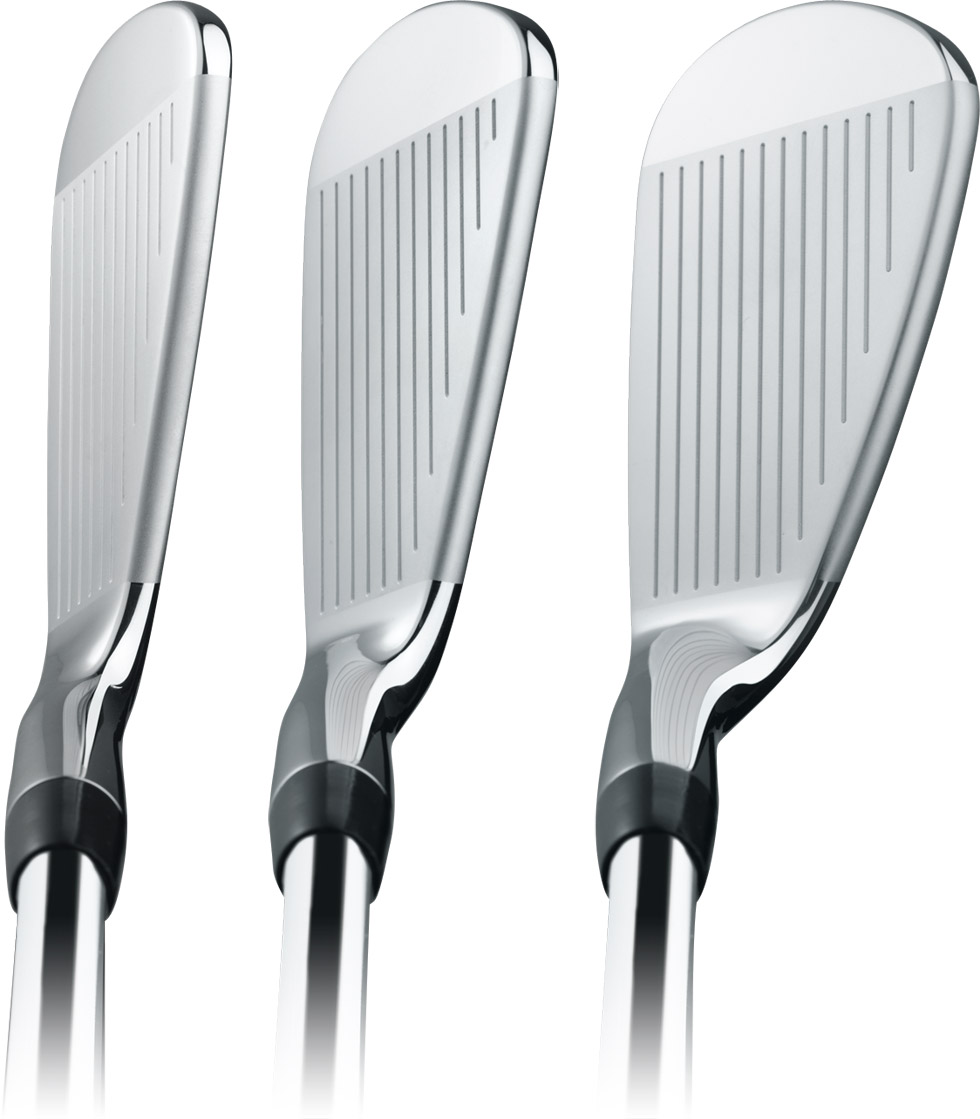 It is when we look to the bottom of the clubhead that we discover one of the main differences between the two. The MB has a narrower cambered sole, and a single degree of added bounce in the long irons versus that of the CB. This is said to promote a crisper contact, and should slide through the ground quite nicely. The back of the head is expectedly clean, and shiny, with “MB,” “FORGED,” and the Titleist logo stamped and filled in black. Further inspection also reveals stamping on the hosel reflecting the 710 series name. 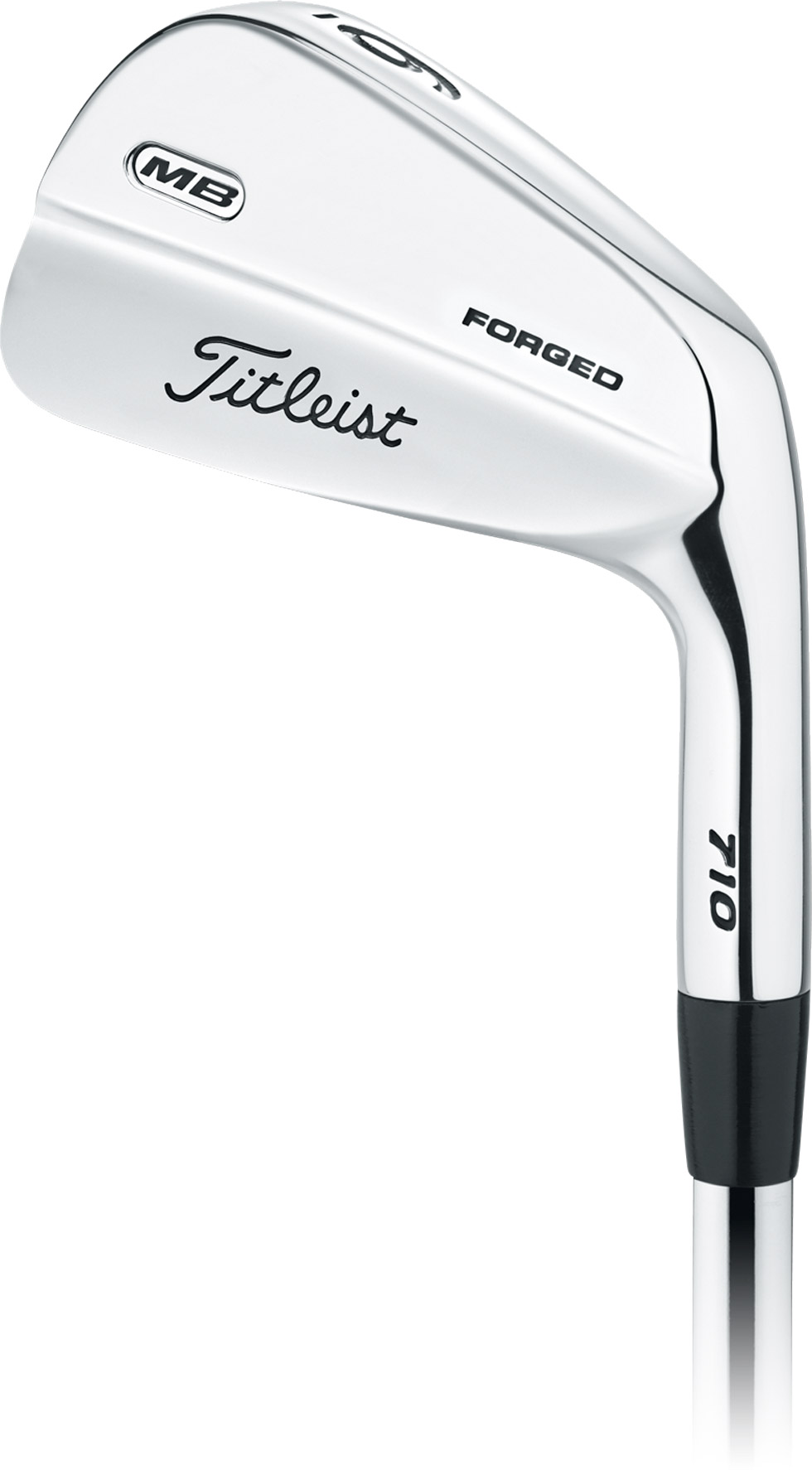 The MB is so much more than good looks though. One of the major contributing factors to the shotmaking abilities of this iron is the minimal progressive offset. The solid feel of this iron is largely attributed to the consistent muscle shape positioned behind the impact area. The aforementioned dual hosel design has also been used in the MB for optimizing the launch and flight path of both the long and short irons.

Options, Pricing, and Availability
The standard shaft and grip in the MB is the same as that of the CB – the proven combination of True Temper Dynamic Gold shaft/Tour Velvet Rubber grip. As you can expect, a plethora of custom options are available (including length and lie adjustment) from Titleist Custom. Though the MSRP is listed at $135 per club, most custom options will bring that price up somewhat. Both right and left handed players can get in on this action on December 1st.

Scotty Cameron “California” Family Putters
After seeing the new irons, are you drooling yet? If not, Scotty Cameron’s latest California line of putters may induce just a little loss of jaw control. It’s ok – we won’t tell if you don’t. As if that’s not enough to push you over the edge, the Master Putter Craftsman (MPC, for short) also is adding three new models to the wildly popular Studio Select line.

Says Scotty of his California series:

Players who prefer the more flowing, less geometric lines of the Coronado or the Del Mar are now going to find that they don’t have to sacrifice performance. With the wide range of weight and length options that we now have available, players can get a perfect fit for their stroke as well as their eye.

Though the California putters have what’s being called a “Honey Dipped” finish, the bronze hue doesn’t come from any special plating or coating. Instead, the natural finish of the head is the result of a heat-treating step in the manufacturing process. The final result is a great looking head that also serves a purpose in reducing glare. 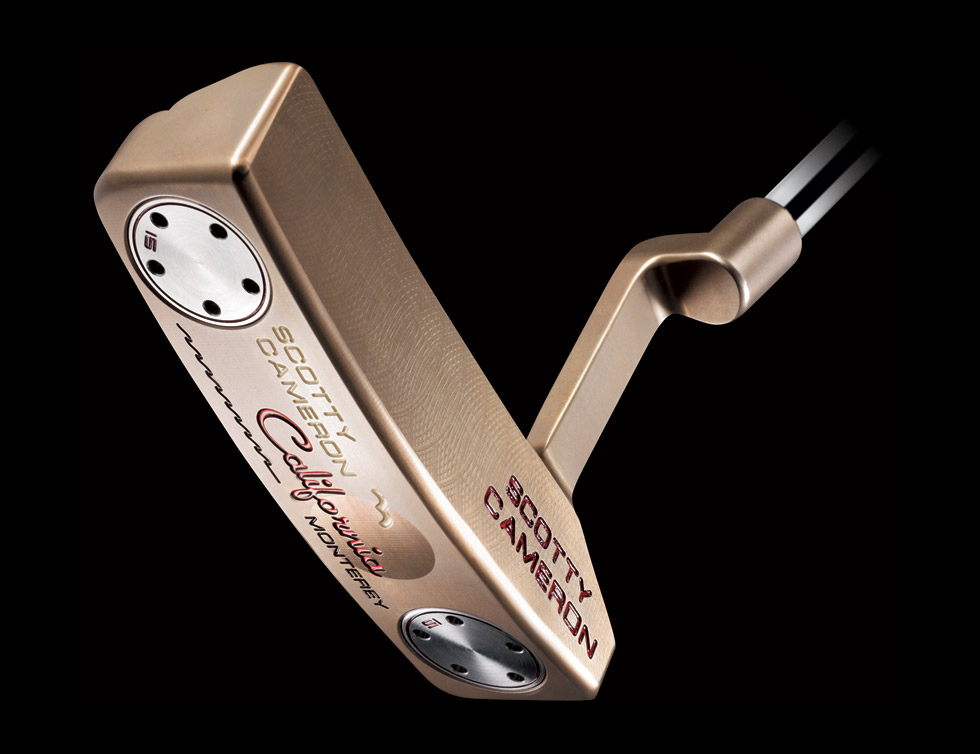 As you can see in the above picture, just like the Studio Select line, the sole of the California putters feature circular weights in the heel and toe, which provides players with the ability to balance the head weight to perfectly fit their stroke. They are milled from soft 303 stainless steel and then fitted with the desired weights. The draft sole design helps to achieve the proper alignment by keeping the putter square in the playing position. More assistance is provided by the high toe, which should increase the player’s accuracy by keeping them from raising the toe and missing left.

Models
Coronado: Blade putter with a smooth, double-step flange and flow neck with a half shaft offset. The Coronado features an engraved site dot on the topline. Available in right hand only. 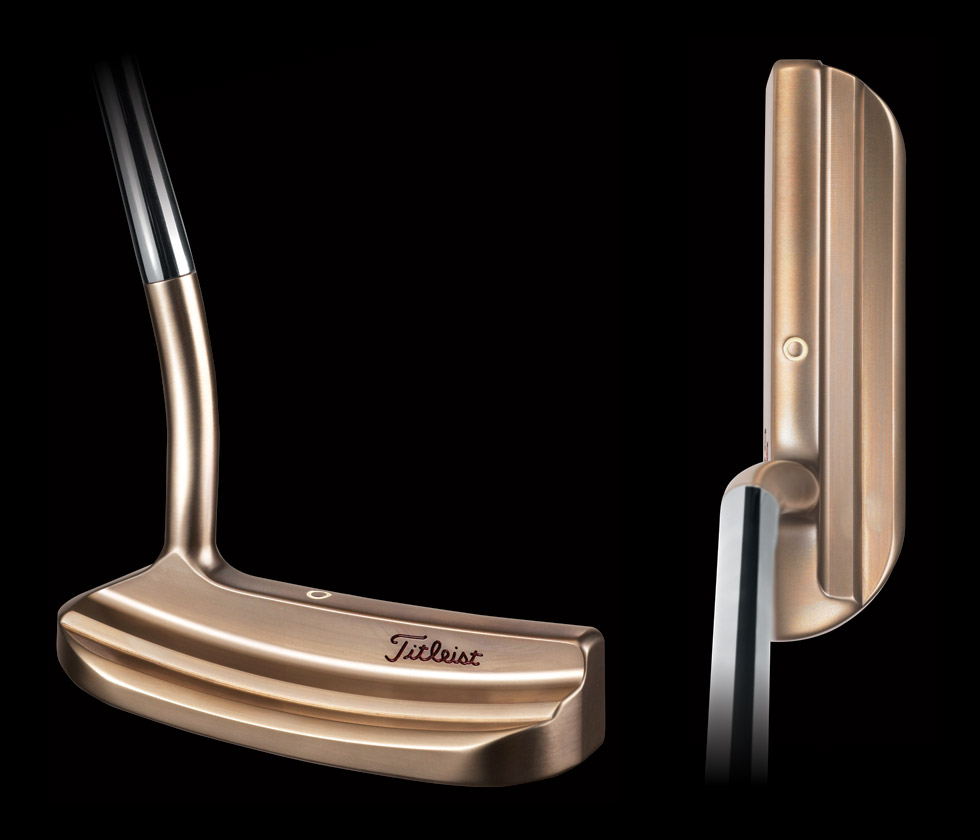 Monterey: A blade body with smooth double-step flange with a back pocket and engraved site line, and a plumbing neck hosel with a full shaft of offset. Available in right hand only. 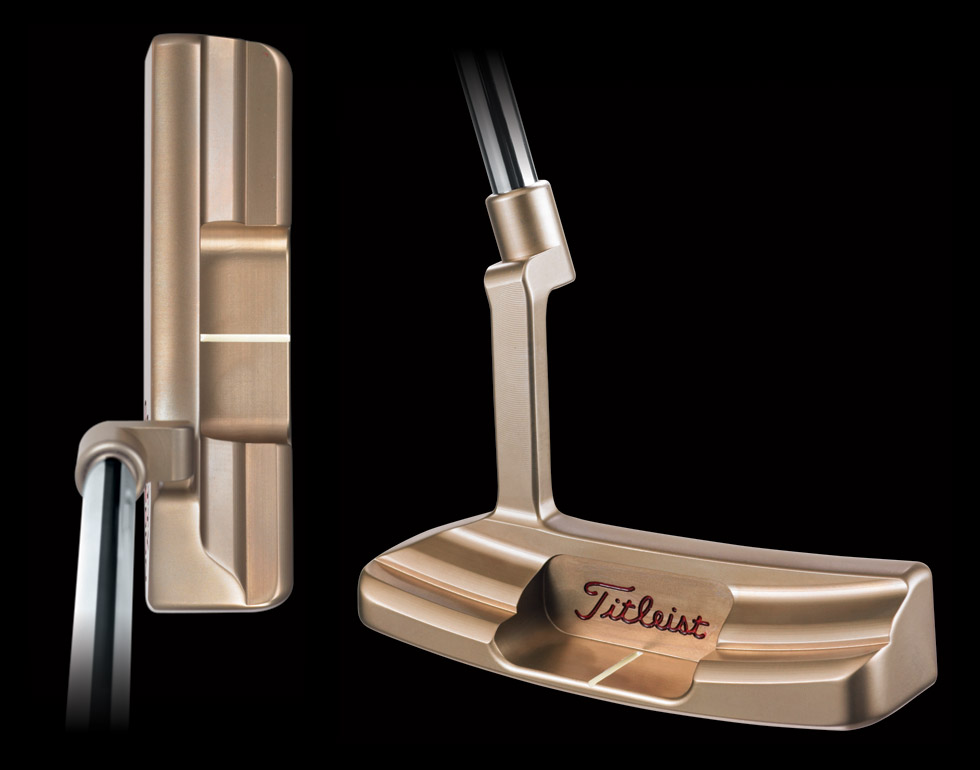 Sonoma: A compact mallet with a D-shaped back flange and sight line, and a plumbing neck hosel with a full shaft of offset. Available in right hand only. 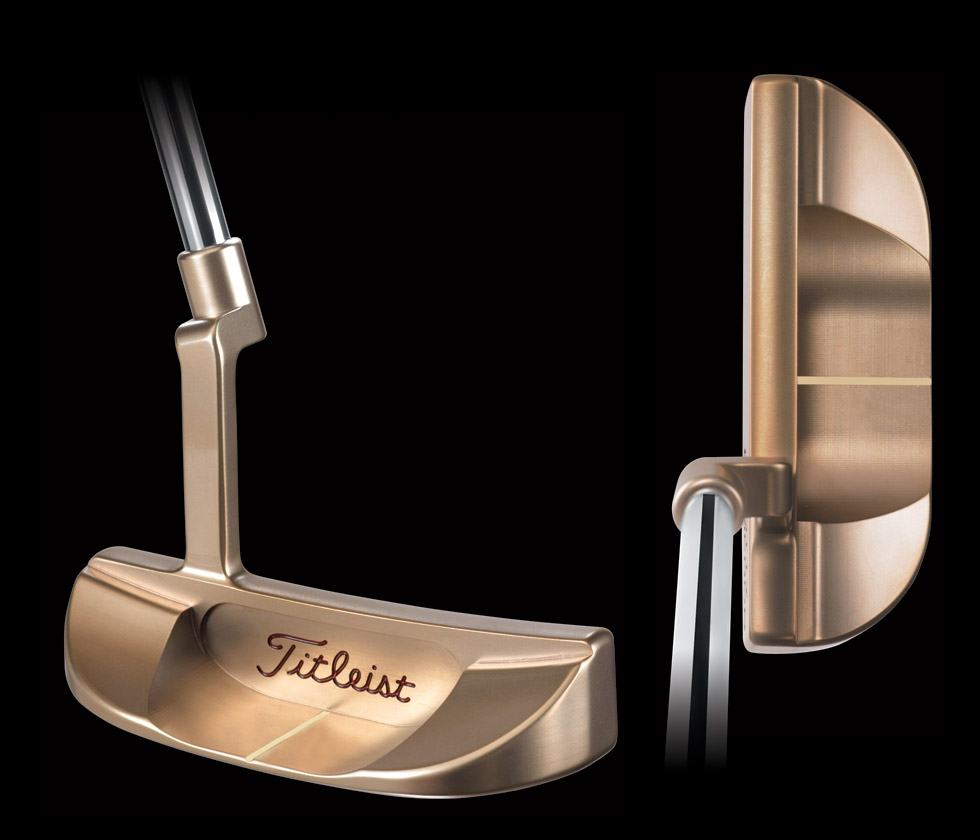 Del Mar: A heel-shafted mid mallet design with engraved sightline on the back flange, and a flow neck hosel with a half shaft offset. Available in both right and left hand. 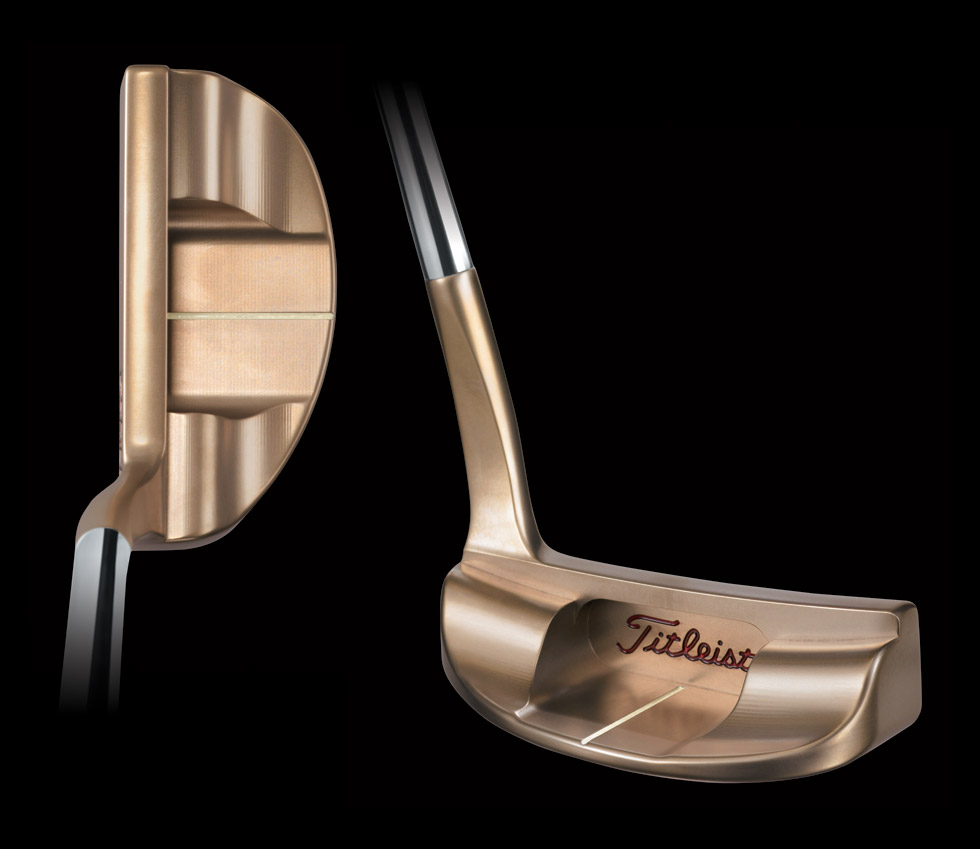 Options and Availability
A wide range of options are available in the California line, including 33″, 34″, and 35″ models, as well as heavy weight variations on the two longer models. Though the standard lie is 71°, the putters can be adjusted two degrees up or down to better suit the player. The clean appearance is maintained throughout the entire length of the putter via the use of a stepless shaft and a black Cameron Tour grip. They are priced at $325, and expect them to be available this December.

Scotty is a perfectionist and constantly solicits feedback from all of the players with whom he works. He takes the information he receives, builds upon it, and refines his designs, resulting in putters such as the Newport 2.5, Squareback 2 and Fastback 1.5. Utilizing the practice greens across the worldwide professional tours and the Putter Studio as his laboratory, in combination with his creativity and vision, Scotty Cameron is the foremost Master Putter Craftsman in the industry today, and it continues to shine through in his new California and Studio Select offerings.

Here’s the rundown on the new models:

Newport 2.5: Popular Newport 2 head with engraved sightline on back flange and flow neck with a half shaft offset. Available in right hand only.

Squareback 2: A modified Newport-style mid mallet design featuring a more compact head with a square back flange and a plumbing neck hosel with a full shaft of offset. Available in both right and left hand.

Fastback 1.5: A modified Newport-style mid mallet design with a rounded back flange and a flow neck with a half shaft offset. Available in right hand only.

All three will be available in December for $325.