Grey Hawk will drop the jaws of the higher handicapper, but it fails to appeal to better players and fans of architecture.

Grey Hawk Golf Club in LaGrange, OH is a residential golf course built in 2004. 45 minutes from Cleveland, the course is a bit out of the way, but worth the trip if only to see what warranted its inclusion in Golf Digest’s “Best New Affordable Public Courses” list. A friend and I visited the course in late June, 2006 to give the course a look. Measuring anywhere between 7079 and 5091 yards, Grey Hawk offers a linksy Florida blend at reasonable prices.

Before we begin, we’d like to thank forum member Mark (aka “ezmoney5150“) for the invitation. If I’ve ever played with a more gregarious fellow, I can’t remember it. Mark’s company made what could have been a very dull round much more interesting.

Conditions
As a relatively new course, I expected Grey Hawk to suffer from a few spots of burn-out (or failed grow-in), inconsistent bunkers, and varying consistency. I found very little of the latter two and only a few dry, brown areas in the usual areas – where carts congregate and on steep banks, most of which were well out of the line of play. 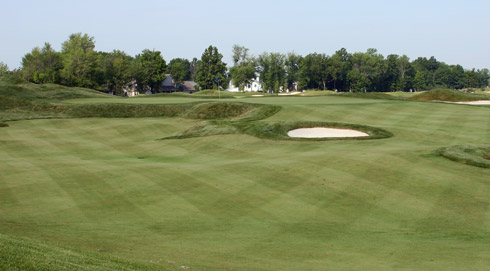 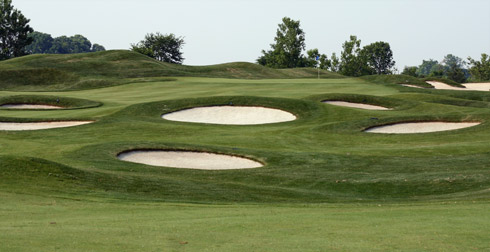 Two looks at Grey Hawk’s fourth hole, a 525-yard par 5 that plays gently uphill. After a horribly struck drive that rolled forever, I got home with a 3W and two putted for birdie. The first image is from the left side of the fairway, the second from the right.

The greens putted and rolled consistently (and were reasonably quick at about 10.5 on the Stimpmeter), the fairways were green without being overly lush and soft (both of which limit driver roll), and the rough was healthy enough to gobble up balls hit into them with surprising vigor. The grasses around the course were clearly given plenty of time to grow in and thicken up and are maintained quite nicely. That’s not something you always see on newly constructed courses who are eager to open for play.

Unfortunately, the health of the grass at Grey Hawk isn’t the primary concern. That distinction belongs to what’s beneath the grass. The greens at Grey Hawk were seemingly not built to USGA recommendations, which call for a large top layer of sandy turf. Instead, the top layer of Grey Hawk’s greens consists of firm, clay-laden dirt (despite rain earlier in the week) that kicked even the spinniest balls well away from their impact point. It may take a decade of aerating and topdressing before the soil conditions soften significantly.

If you mentally replace all of the solid, light-green areas on this map with housing, you’ve got your typical housing complex with a golf course and a pretty good idea what you’ll see at Grey Hawk: lots of houses.

Design and Layout
A mid-handicap friend who spends five months per year in Florida and who accompanied me on my trip to Grey Hawk said “this reminds me of almost every course in Florida.” Grey Hawk, like many Floridian courses, was built with housing real estate in mind. It has wide fairways bordered by man-made mounds. It’s “linksy” in its general feel, yet has generally non-linksy attributes like the man-made hills, too much water, and soft run-up areas that do everything to taint or ruin any linksy feel. In fact, in the end, the only “linksy” attributes seem to be the general lack of trees and a steady wind.

As I started to discuss above, the greens simply didn’t hold. Balls – even those hit with full sand wedges from 100 yards, loaded with spin – bounced and skidded 20 to 25 feet from where they landed. I could have managed my game – bouncing balls onto greens and playing the slopes – but the course was devoid of such slopes and the fairways fronting greens were soft and lacked the same “bounce” shared by the greens. This led to an unappealing – and I would argue unfair – mix of bump-and-run greens with “fly it to the hole” fringes. Front pins were inaccessible via any route not involving blind luck and helpful squirrels while holes tucked just over water hazards or pot bunkers were completely out of play. 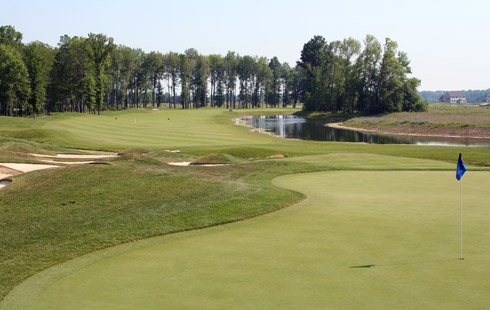 The seventh requires a tee shot to a neck of fairway bordered on the left by water, which follows you to the green, and on the right by woods and bunkers. Most players are likely to lay up here, with 50 yards of bunkers fronting the green.

For example, a 7-iron played into a gentle wind on the ninth hole hit the front of the green (a few feet on) and bounced into the rough behind the green. The pin was in the back, leaving me very little room for recovery. Had the ball come up a few feet short and hit the fairway short of the green, there’s no doubt in my mind it would have stayed there. Results like this led me to care less and less about the golf being played as the round went on: poor shots weren’t rewarded, but neither were good ones. It mattered not from which side of the fairway you approached the greens as they accepted shots from either side equally as poorly, taking strategy out of the game from tee to green.

It’s true that this area of Ohio isn’t known for its real estate – it’s flat, flat, and flat. But I find the cookie-cutter style of golf course design that architects von Hagge, Smelek and Baril employed bland at best. A quick perusal of their site indicates that they’ve inflicted the same cookie cutter holes on golfers throughout the world – the false mounding, the unimaginative bunkers, the rock-walled over-water 190-yard par 3, etc.

If you, like me, prefer to play courses on which you’re not always aiming at someone’s bedroom or kitchen window, Grey Hawk is not the course for you. Seen here, #10, a 549-yard uphill par 5 with 16 bunkers short of and surrounding the green.

The course, in large part due to the flat nature of the terrain and its surrounding area, features a steady wind that can be downright brutal at times. Fortunately, the houses and artificial mounds are close enough to play to block some of the wind at ground level, but it will take skill to navigate the course safely in the air when the winds are up. Many of the tougher holes play straight into the prevailing wind, adding more than a few clubs to approach shots. 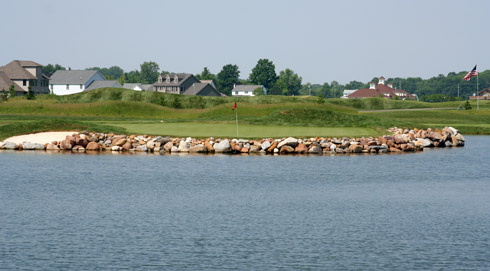 You won’t be bouncing a ball onto the 180-yard par 3 eleventh, one of many greens that touch water. This is an island green with a deceptively deep putting surface.

I haven’t talked much about the design because I found very little actual design on which to comment. There are some nice holes scattered throughout the course – the third is a nice short hole with an “island” green surrounded by sand, the seventh is a par five with a dramatic tee shot, the 11th plays 164 yards from the blues to an island green – but again the rock-hard greens and sticky fairways lead to unimaginative, unfair play. The many bodies of water scattered about the course exist only because the designers needed dirt to create the artificial mounding that surrounds every fairway and accentuates every bunker. Zzzzzzzz.

Bang for the Buck
At $48 to $55 for 18 holes (with a GPS-enabled cart included), Grey Hawk places itself squarely in the “middle class” of golf courses. Grey Hawk offers an all-inclusive $2495 Executive membership that costs less than just about every membership I’ve ever heard of by a wide margin, making it a seemingly good bargain if you live nearby. 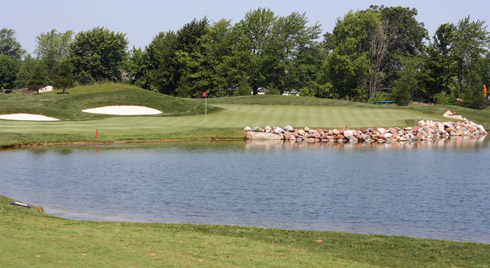 Sensing a theme? The 14th green, another slightly uphill par 5, is also bordered by a man-made pond with a rock wall.

Carts are mandatory (due to the housing through which you’re routed), but at least they’re comfortable carts. It is worth pointing out that the superintendent doesn’t seem to understand golf, as many of the “carts forbidden” areas are literally 150+ yards short of the greens. Mark commented that this was a regular occurrence and was done with seemingly no rationale – the grass was healthy, no health or safety hazards were present, etc.

Conclusion
I lived in Florida for 3½ years, so I know what my friend meant when he said Grey Hawk looks like almost every course in the sunshine state. It does, and its cookie-cutter style clashes with its linksy feel, as do the hard greens, soft fairways, and complete lack of mounding to roll balls to the hole. 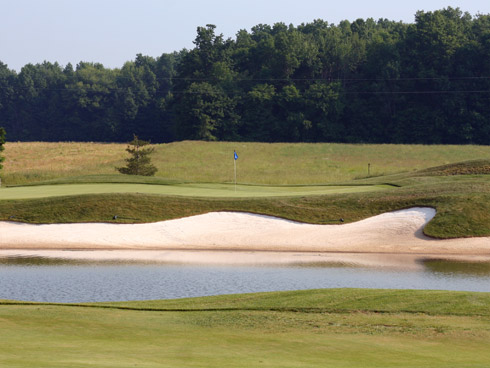 Mark, our host, said that the designers “fixed” a lot of the mistakes they made at another course (Red Tail Golf Club) with Grey Hawk, but I’ve got a long list of new mistakes. Mark is sure that the greens will soften up by the beginning of next year, but I think it will take years and years of topdressing greens with sand to build up the necessary base. This area of Ohio, like my home course, has a lot of clay.

Grey Hawk isn’t golf at its worst. It’s a well conditioned course that’s reasonably priced. The average 15-handicap golfer looking to have a good time with his buddies will appreciate the bunker work, the dramatic views, and the golf. But the better player and the true fan of golf course architecture will be let down by the soft fairways, hard greens, and the bland cookie-cutter approach the architects took in designing the course.

Grey Hawk’s clubhouse is an impressive testament to the inexpensive building costs we enjoy in the northeastern United States.