Can Michelle Wie finally get over the hump and win an LPGA major championship, or will another relative unknown come out of the shadows to steal the tournament? 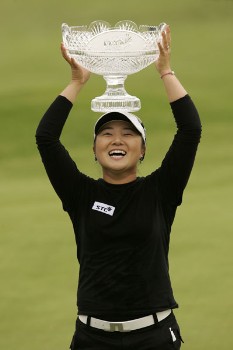 If you had the chance to ask current LPGA star Jeong Jang her favorite memory of 2005, chances are she would probably pick her wire-to-wire win at last seasons Women’s British Open as the top moment. Last year Jang went from unknown to British Open champion with a wire-to-wire victory over Annika Sorenstam and a cast of other LPGA stars to capture her first tour victory. Her final score of 16-under-par last year was also the third lowest four round total in Women’s Open history.

The Course
Royal Lytham and St. Annes Golf Club hosts the Women’s British Open for the third time in the course’this threads storied history. The last time the event was played at Royal Lytham was in 2003 when Annika Sorenstam held off Se Ri Pak for a one-shot victory.

The course happens to be the shortest major test this year at 6,432 yards. However, anyone that watches golf knows that British Open courses make up for lack of length with high winds and undulating fairways. I checked the course website and found out that there are roughly 200 bunkers on the course, as well as a heaping helping of holes that play into the wind.

If there is one spot where Royal Lytham could give up a lot of shots, it could be on the par threes, the longest of which measures only 174 yards. On a side note: this longest par three at Royal Lytham also happens to be the first hole on the golf course – a rarity today by most tour courses.

Who’s Hot
Michelle Wie will again take the major spotlight this week for the Open with the chance to secure her first major championship. She has all the tools win this week, plus her T2 at the Evian Masters has to give her confidence going into the event. If she can learn how to keep the putter hot for the entire tournament, you might just be watching her hoist the trophy on Sunday. 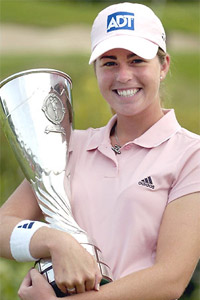 Paula Creamer has finally found her stroke after fighting a bad wrist for the last couple of weeks. Over the past three tournaments, Creamer has posted fourth-, seventh-, and third-place finishes. Last year at the British Open she finished in a T15 at 6-under-par.

Karrie Webb has resurrected her career this season after falling off the map previously. With a win at last week’s Evian Masters, Webb grabbed her third win of the year, and is in prime position for Player of the Year honors.

Who’s Not
Lorie Kane used to be one of the best players on the LPGA; however, that was back when she actually was able to post top-10 finishes. This year Kane has played in 13 events and still has yet to post a top 10. I don’t think this is the week she breaks that streak.

Carin Koch is in the same board at Kane. Koch has yet to post a top 10 in 11 events this season. She is a player that loves the wind, so maybe this is the week she finally gets off the schneid.