The camera should be between six to twelve feet from the golf ball. Too far away and not only will the golfer not fill the frame, but the shift in perspective makes some angles and positions tougher to see.

The best way to set the camera up for a Face On view is to use an alignment stick perpendicular to your target line in the exact middle of your stance. Set the camera right on that line, and the stick can double as a ball position aid as well.

The caddie view is illustrative in looking at the length of the golfer’s backswing, any movement side-to-side of his head, the location of weight at key positions, the low point of the club, and any casting of the club or flipping of the hands, among other things. 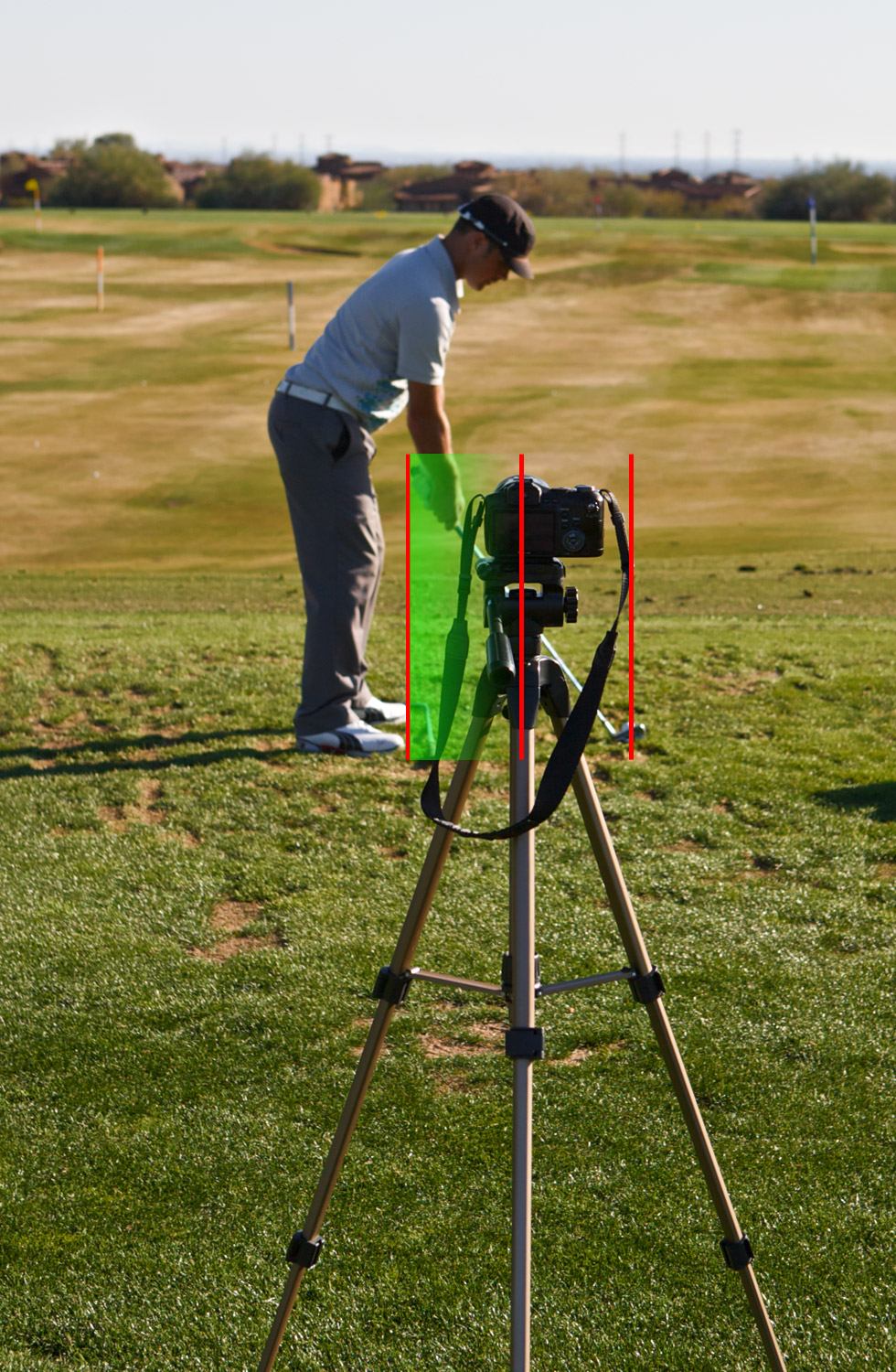 The Down the Line view is a bit trickier to set up consistently. Again, the camera should be at roughly “hand height.” Of course, rather than being square (perpendicular) to the target line, the camera should be aimed parallel to the target line, as illustrated by the three red lines above. The golfer should be in the left-center of the frame with a little room above his head and below his feet.

Though many are tempted to put the camera ON the target line out where the ball is, centering the ball in the video, this isn’t helpful as it puts the golfer completely to the side of the video, wasting resolution and providing a poor angle for almost every phase of the golf swing due to parallax.

The absolute best position for the camera shooting Down the Line video is parallel to the target line along the rear foot’s big toe – the left-most red line in the image above (and where the green shading is the brightest). A camera pointed parallel to the target line and halfway between the ball and the toes is acceptable but not ideal. Finally, a camera positioned directly behind the ball (the right-most red line) – regardless of how perfectly parallel it may be to the target line – is not very helpful at all as it will distort almost every phase of the golf swing (including the position of the club shaft and head).

The camera should be between eight to twelve feet from the golf ball. Too close and things may be distorted as the club’s arc can get awfully close to the camera during the backswing and downswing.

Most people have a brilliant camera in their pockets, as the modern smart phone can record HD video at 120 or 240 or even higher frames per second.

For all but the shots or situations listed below, we recommend that you record video at about 200-300 frames per second. Any less and you’ll miss subtle movements and you could miss impact by several inches. Any more and, unless you’re really looking to document something very small or intricate, and you’re just taking up more space and making playback take much longer than necessary. We also recommend recording in at least 720p video, with little need for 4K video at any frame rate (unless you’re recording a swing to print out at a large size or something!). The golf swing is, after all, a fast-moving thing with little time to stop and appreciate the pixels. (This recommendation will likely be outdated several years from now, as technology continues to advance, though there are limits to what the human eye can perceive, too.)

Situations in which you may want to scale back the frame rate include:

GOOD lighting is important. Though a camera recording at 240 FPS could have a “shutter speed” or “exposure time” of each frame of up to 1/240th of a second to properly expose the image in each frame, more light allows the shutter speed/exposure time to be much shorter.

We installed several lights in our academy to record video at 1/1000th of a second, which is very nearly the bare minimum shutter speed we recommend. Outdoors, even on a cloudy day, modern cameras are able to achieve 1/1000th or faster quite easily, but indoors some individuals will have a hard time getting 1/500th or so.

Why is this important? Because at higher shutter speeds, not only do we see the smaller motions, but objects are less blurry. If you’re trying to look at the leading edge of the clubface at A6/P6, you’ll see it pretty clearly at 1/2000th of a second, and you’ll barely be able to tell where the clubhead is at 1/500th, let alone make out the leading edge. 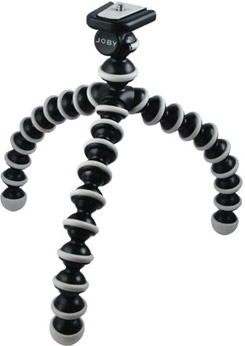 Some sort of tripod, or a phone clip that attaches to an alignment stick, are absolute musts. Your tripod could be anything from the $30 Gorillapod (shown at right), which can attach to a push cart, a golf car, your driver, etc. to a more expensive tripod. If you’re in a pinch, search the Internet for “bottle cap tripod.”

The purpose of a tripod? There are two. The first is to keep your video stable, so that any movement you see is due to the movement you’re doing, not the camera person moving as they record your swing. Second, and perhaps most importantly, to get the proper angles, particularly height. Without a tripod, many will resort to recording swings by setting their phone on the ground.

7 thoughts on “Filming Your Golf Swing”