We take a walk through one of the best back nines in golf.

Augusta National has a solid front nine, but it’s the back nine where the course really shines. Every hole can easily lead to a bogey but each one is also birdie-able, as Charl Schwartzel and others showed us last year. Because of this, going into the back nine on Sunday everyone within shouting distance of the lead is still in the tournament.

Last year we saw Tiger destroy the front nine, then shoot a disappointing 36 on the back nine. Conversely, Charl was just two under on the front nine but he laid siege to the last four holes of the back nine, and pulled out the tournament.

A complete about-face from their earlier deadlines, Augusta National has opened up recently. No, they haven’t changed their membership policy, but Augusta National now offers the most comprehensive online streaming infrastructure in golf. Augusta has also added more early-round coverage, and the addition of the course to the Tiger Woods PGA Tour video game has given us unprecedented access to one of the most interesting courses in golf.

Number 10: Camellia
The back nine starts with the 10th hole, a 430-yard downhill dogleg left par-four. Not the most noteworthy of holes, but no slouch either. The original design by Alister Mackenzie consisted of many scraggly-edge bunkers that were difficult to maintain and a pain to play from, and 10 is one of the few holes to still have a similar bunker. As the hole has been lengthened the bunker has become utterly redundant but the wildly stylized bunker is a nice throwback to the course Jones and Mackenzie envisioned.

Recent history on 10 starts and ends with Rory McIlroy’s epic meltdown, in which he hooked a tee shot dead left into an adjacent backyard. A few more poor shots led to a triple bogey, and McIlroy was cooked. 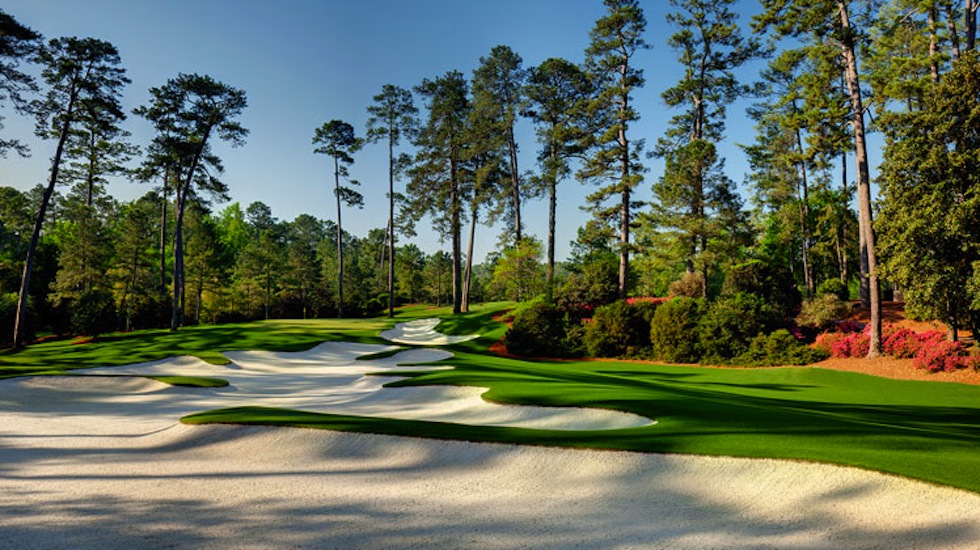 Number 11: White Dogwood
11, the beginning of Amen Corner, is where Augusta starts to show its teeth. Of the hole, Ben Hogan famously said that if he ever flew his approach shot onto the sloping, water-adjacent green, it had been a mistake. Before the higher powers at Augusta planted additional trees on the right, pros used to be able to hit a high draw into the fairway but these days most pros will attempt to hit a cut off the tee. They will then usually opt to play for the right of the green and hope for a nice kick, rather than flirting with the water on the left and Rae’s Creek behind. 11 is the location of Augusta-native Larry Mize’s famous chip in to beat Greg Norman in ’87 and, especially in recent years, it has been one of the most difficult holes for Tiger Woods.

The 11th hole was actually built as much more of a dogleg than it is now. It was straightened considerably in the 1950s, and the dammed portion of Rae’s Creek in the background used to be a mere stream. Over the last decade the fairway has been tightened considerably, a change that four-time Masters champ Arnold Palmer has criticized.

Number 12: Golden Bell
Number 12, a par-three, is the shortest hole on the course, but also one of the toughest. “Golden Bell” often plays over par thanks to swirling winds, Rae’s Creek in front, and bunkers long and short that are not to be messed with. If you go left you run the risk of losing your ball in the pine straw, the fate that met hook-heavy Graeme McDowell in last year’s third round. The 12th has often been important for go-for-broke Phil Mickelson, who is four-under on that hole in years he has won and 15-over every other year, and was the final straw that broke Rory McIlroy’s Masters hopes last year, when a four-putt sealed his fate.

“Golden Bell” is one of the least changed holes on the course. It’s only five yards longer now that it was in the 1930s, and the green, though now much smaller, is still in roughly the same place. As with 11, Rae’s Creek has been dammed in front of the green and the bunkers have been relocated several times. 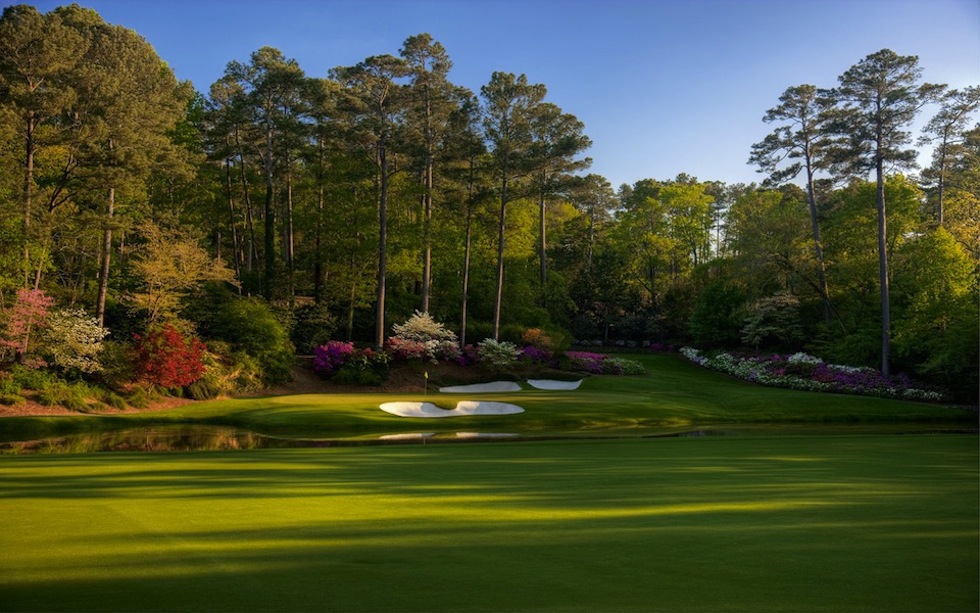 Number 13: Azalea
13, the last leg of Amen Corner, is the first of two par-fives on the back, but it’s far from a bomb and gouger’s delight. Most professionals will have to either play a huge draw off the tee of “Azalea” or layup with an iron. At only 510 yards the green is reachable in two, like Phil did in 2010 to kick his Masters run into overdrive, but Rae’s Creek and four bunkers surround the sloped green and fringe, and an approach shot to the wrong level can make for a tough two-putt.

The 13th is another hole that has not been changed often. The so-called “flash bunkers” that extended outward from the back of the green like rays of sunlight have been replaced with more traditional sand traps, and they’ve stayed relatively constant since the 1970s. Other changes have included additional trees along the dogleg that shrink the landing area considerably and a much-maligned temporary raising of Rae’s Creek that lasted less than 10 years due to player protest. 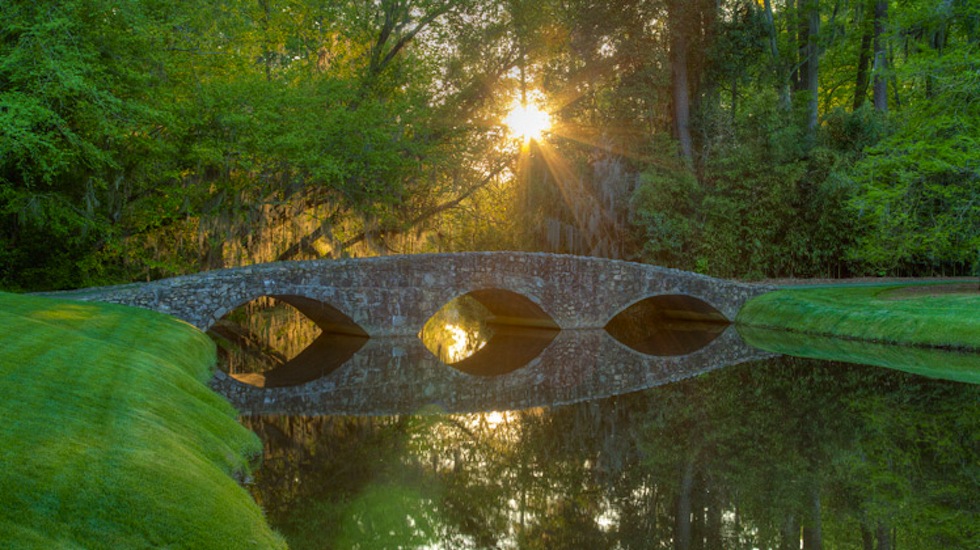 Number 14: Chinese Fir
14, “Chinese Fir,” is famously the only hole on the course without a bunker. 14 may look bland (or at least has bland as Augusta National can be), but it’s had more than its share of exciting moments. In 2006, Tiger Woods ripped a driver 377 yards, then jarred an eight-iron for eagle while Phil Mickelson equalled the feat in 2010. On the other hand, Nick Price made an eight on 14 in 1993. As Price and many other have found out, if you aren’t on the correct tier of the green you aren’t making birdie, and pars aren’t gimmes either.

Though it may not have sand today, “Chinese Fir” did used to have a scraggly bunker, similar to that on 10. It too was never really in play, and was filled in by the 1950s. 14 was also considerably more wide-open, and the original green was much smaller.

Number 15: Firethorn
Number 15 is the second par-five, and is one of the best birdie holes. A good drive leaves most professionals with a long iron or a fairway wood to the green, but the water short of the hole is waiting. Bailing out long isn’t much of an option either, as chipping from the collection area over the green is no easy task. As Tiger Woods proved last year, the green is tricky no matter where the pin is.

The 15th hole that hosted Gene Sarazen’s double eagle in 1935 is much different that the 15th hole today. The cluster of trees that jut out into the left side of the fairway used to consist of a few immature pines, but they are now part of a set of trees that have cut the fairways in half. The lake that now fronts the green was formerly a stream, but upstream damming has increased its size substantially.

Number 16: Redbud
16 might be a short, but it’s green could very well be the toughest on the course. With the middle-left pin position you’ll see most guys aim for hole high in the middle of the green, which lets the ball funnel down to the hole. 16, one of my personal favorites, is the hole where Tiger chipped in in 2005 to keep pace with a charging Chris DiMarco, and also played host to Jack Nicklaus’ famous tee ball in 1986. 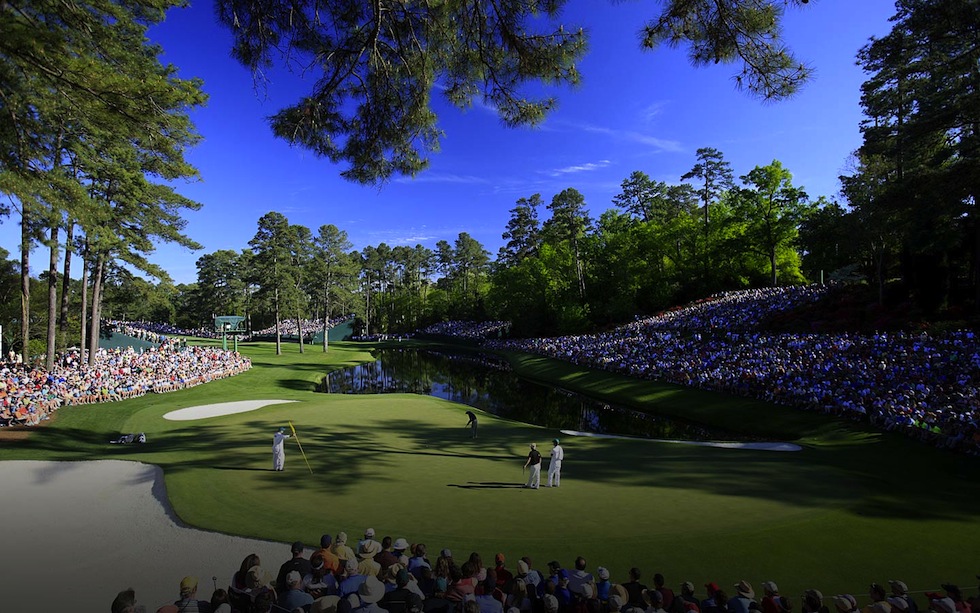 The 16th hole as it stands today is nothing close to what Alister Mackenzie built. Neither the green nor the tee are where they were built, and the lake, like most on Augusta National, was once a small stream. The green was relocated post-World War II by Robert Trent Jones, and has remained much the same ever since.

Number 17: Nandina
The famous Eisenhower Tree that resides on 17 and blocks the left side was, obviously, named for the former U.S. President and General. Ike, a club member, famously proposed that the tree be cut down at a 1956 club meeting. Club co-founder Clifford Roberts ruled him out of ordered and adjourned the meeting, showing that not even the President of the United States is above Augusta National. The green on 17 is where Jack Nicklaus made a bomb of a birdie putt to pull ahead in the 1986 Masters with his son Jackie on his bag, and Ike’s Tree is where Tiger Woods injured his left leg last year, forcing him to miss two majors.

The 17th hole was built without a single bunker, and featured a green modeled after St. Andrews’ 14th that sloped from back to front. Perry Maxwell added several bunkers short of the green in the late 1930s, which made it much harder for players to run the ball onto the green, and by the 1950s the Eisenhower Tree was becoming burdensome. Over the last 20 years many trees have been added on either side of the fairway, and the hole is significantly more narrow than it once was.

Number 18: Holly
The 18th hole is the culminating finish of Augusta National. Two strong shots are required to get to the green, and that’s just what Phil Mickelson did to set up his Master-winning birdie putt in 2004.

18 has maintained its general shape over the years, but many of the specifics have been altered. A signature Mackenzie bunker was originally located 100 yards short of the green, far enough that it was never a problem off the tee. It was eliminated by the 1960s, and two square-shaped bunkers were placed along the left side of the fairway. They were in play, and it’s widely assumed that Clifford Roberts had then cut to toughen the course shortly after long-hitting Jack Nicklaus set a Masters scoring record.

The hole, like most others, has be lengthened and made tighter, and today only the longer hitters can reach the fairway bunkers. The green, originally built with several tiers, has been shrunk considerably, but the sloping nature still remains.