I compare George’s golf swing is to the swing of Tiger Woods… but that’s not necessarily a good thing.

George Promenschenkel is about a nine-handicap golfer, but his scorecard can include anywhere from birdies to snowmen. We need to change that – at least the snowmen part. His goal is to become a five handicap and based on his swing, I think he is a lot closer than he realizes.

After analyzing his swing I have identified two problems – one which we have seen before and one that we haven’t – which must be dealt with simultaneously.

Read on to see George’s swing and the fixes I’ve outlined for him.

George’s swing can be seen here as a QuickTime movie. This shows two angles, at both full speed and quarter speed, both with the driver.

I would highly recommend that you watch the video, identify what you have found as his root problem, and then read on to see if you’re right.

My first thought – even before pressing play – is that George should be hitting the ball relatively hard. I looked back to the information that I received from him and was shocked when I saw that he averages about 250 yards. However, after identifying his biggest faults I can see where he is losing a massive amount of power in an effort to gain accuracy.

My job is not to make him more powerful but lose more golf balls. I feel that there is a way that we can give him a simpler way to be accurate AND allow him to utilize his core muscles for power. To accomplish this we are going to move his ball position forward and focus on keeping his leading shoulder behind the ball at impact.

Ball Position and Stance Width
I have said this before, but anytime that I am analyzing a swing with a face-on camera angle the first two things that I check are:

Let’s review what you are looking for using Tiger’s set up. 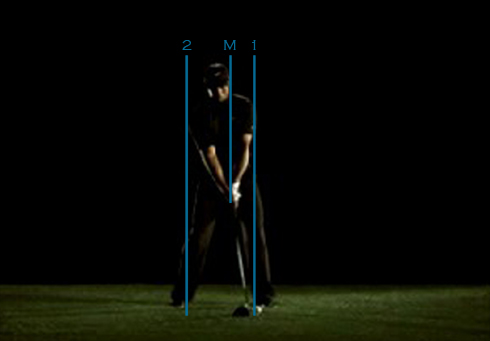 Line M: This line is a supporting line for Line 1 which crosses through two parts of your body. 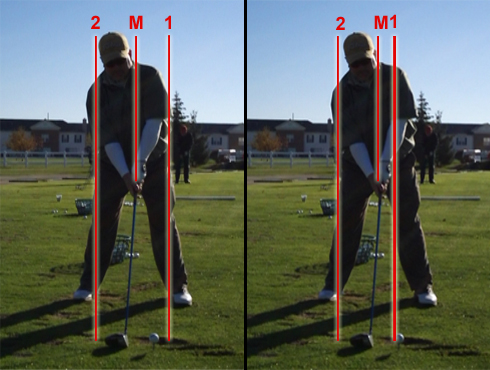 If you chose the George on the right with Line 1 drawn through the backside of the ball you are absolutely correct. This will have a substantial impact on our analysis later on. As you can see, Line 1 is running through the backside of the ball, well behind his leading heel, behind his leading hip, and behind his leading shoulder. Unfortunately, because George’s body is not on the same line as the ball, his body is going to make some pretty dramatic compensating movements to try to hit the ball straight. Anytime you have to make a compensating movement with your body you have to slow down.

So our first, relatively simple change that George is going to need to make is to move the ball forward. This is a hard change to get used to but considering George’s body is already in a pretty solid position it should be a little easier for him. We are not done yet though.

Leading Shoulder at Impact
George is a pretty solid golfer but he has a pretty major set up flaw. As a general rule, if there is one flaw in your swing you will not be able to play well. This must mean that he has something that he is doing to offset his ball position.

We have already gone over how important Line 1 is at set up but I cannot stress enough how critical Line 1 is at impact. In fact, I would argue that even with the incredible amount of variations you will see among tour pro swings – dating as far back as there are videos – there is nothing more consistent than where a player’s leading shoulder will be at impact with their driver. 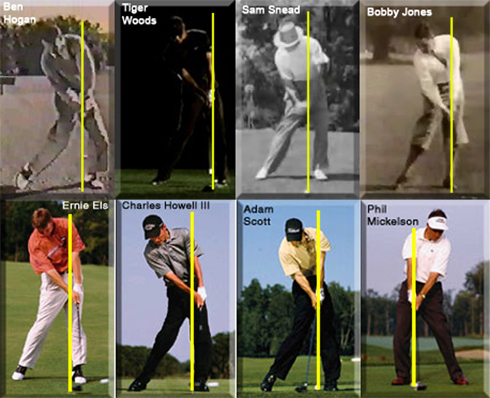 I will spare you the physics of this, but with your driver your leading shoulder must be on or behind Line 1 or you cannot properly hit the golf ball straight. In fact, as soon as your shoulder gets in front of Line 1 the only way that you can come close to hitting the ball straight is to release the club very early on and lose a ton of power. Odds are though that rather than hitting the ball straight, you will end up with a slice or hook and a not very powerful one at that.

There are several moves that George has been making to offset his ball position but pretty much every time you see a low-handicap golfer with a bad ball position you can expect to see a pretty violent move with their leading shoulder as they approach impact. George is in good company – Tiger did this for years. 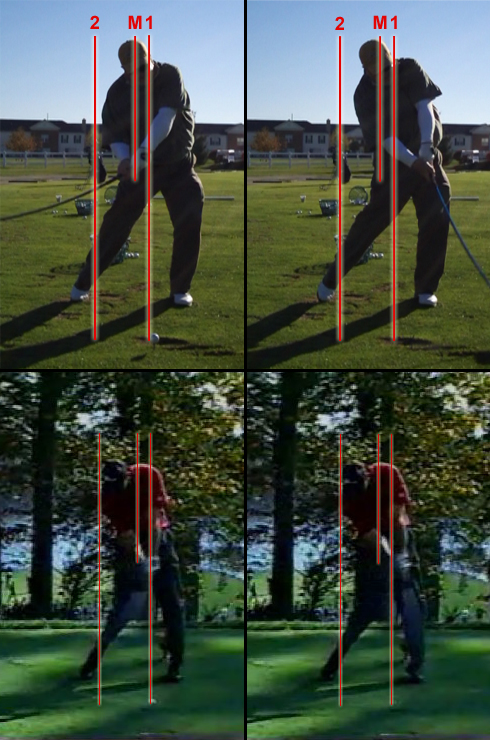 To get to Line 1 both Tiger and George are forcing their bodies to make an incredibly violent motion with their lower body – so much so that Tiger’s left foot literally comes completely off the ground.

Unfortunately, George’s shoulder doesn’t get behind Line 1 and thus, you see him forced to release his hands well before impact. This move has massive consequences for your back and also can prevent you from using your core muscles to produce power. More importantly, it is very hard to consistently make this major adjustment at high speeds. If you are noticing consistency problems with your driver, this is always a good place to check first.

Let’s look at how Tiger’s new swing impact position looks and compare it to his old one.

It is hard to ignore just how different Tiger’s impact position looks now. His left foot is firmly planted in the ground, his body is behind the ball, he is using his core muscles to turn through the ball rather than up and away from the ball, he is creating lag, and in all honesty his swing just looks like it hurts less.

Most importantly, this position is less violent and easier to achieve consistently. Rather than occasionally not getting your shoulder back to where it needs to be and spraying the ball, you can begin to rely on a long, straight drive. This is the change that I believe may take away those snowmen on George’s scorecard and move him closer to his goal of becoming a five handicap.

There are two problems that George is going to have to attempt to fix. Here’s a few suggestions for what my next steps would be.

One: Ball Position and Stance Width
I suggested almost the exact same fix in the previous article but I think it certainly applies to George as well.

Time Line: Moving your ball forward is instant. Adjusting may take a while. The average player may take a month or more to work through this change. However, because George has good fundamentals he may see results much faster.

Be sure to monitor: Line 1. When you move the ball forward to a position that does not feel natural to you your body might think it needs to shift forward during your down swing. If you start seeing your shoulder go in front of Line 1 you need to concentrate on this and nothing else during the change.

Leading Shoulder at Impact
George is fortunate in that his body has already trained itself to try to get his shoulder back behind Line 1 at impact. After changing his ball position, his leading shoulder may actually come naturally. To be safe, I am going to assume that it he is going to be tempted to shift his weight forward during his down swing and will have to need some kind of way to keep his shoulder back. When I was going through this change, my teacher fixed this in one lesson. Here’s how:

Time Line: I thought that this was a pretty easy fix but we are not all built the same way. I have seen a few players who are like me and get this done within the first day or so but take a week or two to ingrain it into their swing. I wouldn’t be surprised if George is one of those players.

There are other parts of George’s swing that I think we may adjust in the future but I truly believe that these two changes may eliminate a lot of his minor flaws. I wouldn’t be surprised if once George fixes his ball position and leading shoulder that he begins to naturally create a little more lag, uses his core muscles a little better, and thus gains a lot of swing speed. More importantly, I wouldn’t be surprised if George notices a dramatic gain in driver accuracy. We’ll see, and I know I look forward to seeing his results!