Working on lag can be tough… especially when another swing fault makes it nearly impossible to create it.

Joe French is what I would consider your slightly above average player. He consistently shoots in the mid-80s. He hits the ball an average to above-average distance. He even has days where he can hit as many as nine fairways and 13 greens. However, he has reached the point where it is time to take the next step. It is time for Joe to start consistently shooting in the 70s. With a few changes, I think we can get him there.

You could probably freeze frame at any point in Joe’s swing and identify a problem. Even at full speed you could say that he takes the club back too far inside, creates no pivot, crosses at the top, casts during his down swing, comes inside, and then nearly jumps off the ground at impact. Ultimately, making a check list of faults is not going to help Joe. Our job is to identify which problem must be addressed next in order for him to achieve his goals.

Read on to see Joe’s swing and the fixes I’ve outlined for him.

Joe’s swing can be seen here as a QuickTime movie. This shows the down-the-line and face-on angles with his driver and 6-iron. I would recommend that you to watch the video, identify what you think is his root problem, and then read on.

Lag has undoubtedly become one of the more popular topics in golf today. It is hard to watch a telecast – especially if Johnny Miller is a commentator – without seeing a super-slow motion video of Tiger Woods, Sergio Garcia, or any number of other players using lag. So, once and for all, let’s address what lag is and then address Joe’s swing with lag in mind. 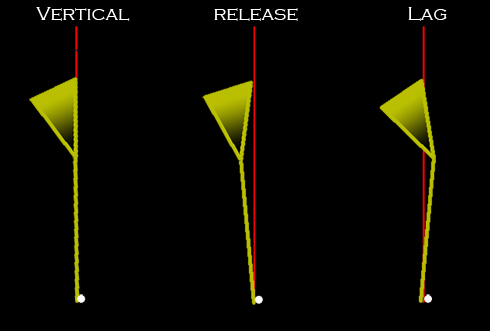 If you are looking at the illustration above, you can see that each of the three different types of swings have different relationships to a vertical line drawn through the backside of the golf ball.

You might be asking yourself why lag is important. There’s a pretty complicated physics-based answer to that question, but the two simplest reasons are: 1) lag maximizes acceleration and 2) lag helps create an optimal launch angle for every club in your bag.

Joe’s Lag
One of the major problems with Joe’s swing is that rather than creating lag, Joe is casting. Take a look at the two frames below. 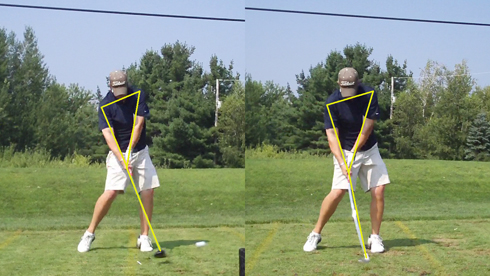 Helping a player create more lag can be incredibly tricky. If a player has mastered all other components of his swing, then he should naturally create lag. However, some teachers view lag as such a swing key that they feel that if their students can master that concept that all other parts of the swing will naturally become better. Confused? So are many golfers, so don’t feel bad.

Just to be clear on where I stand on that argument, it is my opinion that once you master a few key components of the swing that you can attempt to attack lag directly. In Joe’s case, I believe we have to address his leading shoulder first. 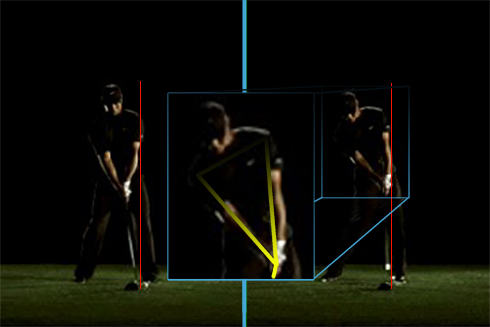 The position of your leading shoulder at impact with your irons and wedges is slightly more complicated. Regardless of ball position, your shoulder and leading hip should start off on the same line at set up. Again, to have the best chance of hitting the ball dead straight with lag, your leading shoulder should be either at or slightly behind that line at impact. 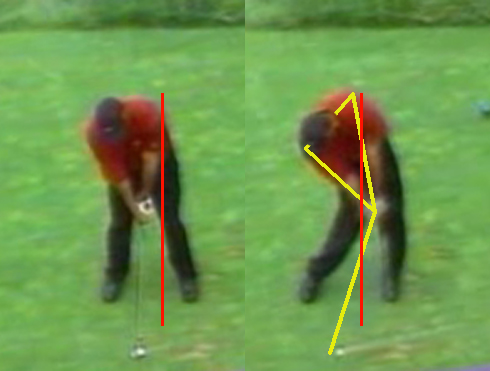 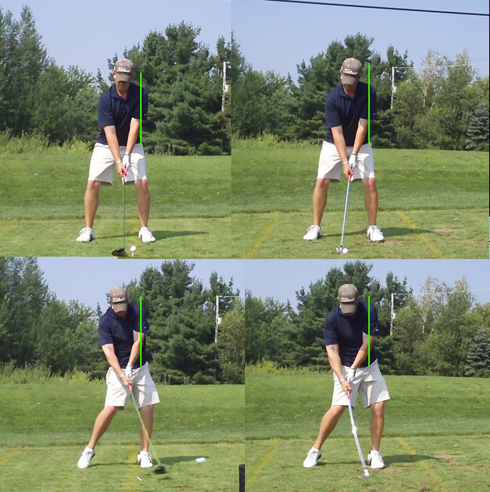 Looking at Joe’s set up and impact position we can easily see some problems. First, although Joe’s set up looks relatively athletic, he is starting with his left shoulder in front of his left hip. Second, Joe’s best efforts to get his shoulder behind the ball at impact – which includes his left foot almost coming completely off the ground – were not successful. With these two faults combined, Joe is going to make it nearly impossible to: 1) come down on-plane, 2) create lag, and most importantly 3) hit a straight shot.

Set Up
If I really wanted to start a firestorm, I would advocate for Joe to position the ball for every club in the bag off of the instep of his left foot. I will leave that battle for another day and simply state that at set up – regardless of ball position – your leading shoulder should be in line with the front of your leading hip. While you could start with your shoulder in front of your hip, positioning your shoulder and hip on the same line primes your swing for the proper impact position as well as create more torque during your back swing. Take a look below at my harshly edited version of how I would want Joe to set up with his driver. 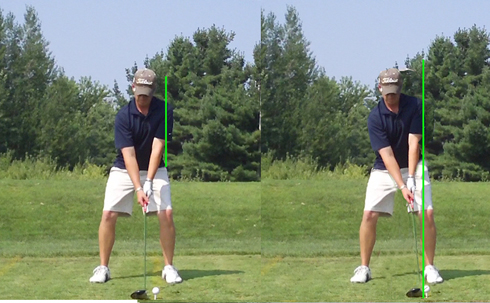 There are two different thoughts that I have found successful to achieve this position. You can focus on:

Leading Shoulder & Hip – Try to feel as if you are pushing your leading hip slightly towards the target while tilting your shoulder away from the target.

Head & Hip – Try to feel as if you are pushing your leading hip slightly towards the target as you feel like your left ear is behind the zipper of your pants/shorts.

Regardless of which feel you choose, be sure to check to see how close you are either in a mirror or on camera.

Here is my personal favorite drill to address this problem.

Be sure to monitor… Your hips. For many golfers, they feel as if they are swinging up at the ball when they first attempt to make this change. It is incredibly important to remember that you do not sway behind the ball during your back swing and your lower body should continue to move through the ball during your down swing and follow through.