Jordan Spieth lost the 2016 Masters by making a number of really bad swings. I take a deeper look into his collapse.

Winning a major golf tournament is an effort many years in the making. All of the practice fine tuning your swing, studying the course and pin positions. All of it take hard work. In 2015 Jordan Spieth had the golf world by the tail. He had won the season’s first two majors and was in the conversation at the British and PGA. It was a masterful year. All the hard work he had put in was paying off.

At the conclusion of the 2015 season, Jordan stated that he wanted to make some changes to his swing along with a workout plan to hit the ball farther. Nick Faldo, the guy who pretty much invented the long-term swing change, immediately came out and said Jordan should be careful to tinker too much.

At the 2016 Masters Spieth had an epic meltdown that actually started on the first tee. From my simple analysis of his swing, it looks as though one of the changes he was trying to make is to open the face a bit more. The details of why or how are probably locked away in conversations with his coach, Cameron McCormick. This is not really the time or the place to be discussing if Jordan is making the right kind of changes to his swing. The funny thing about swing changes is they take time to lock in. For most golfers you can perform the action first on the range, then you can do it regularly on the course, then during competitions, then the last step, on the course during a major championship.

When I watched Jordan make his opening tee shot, he hit what would become his Achilles heel for the day, the high right miss. He had hit it a few times on Saturday as well, but seemed to get away with it. I didn’t watch every shot on Thursday and Friday, but I suspect that it was there also. His opening tee shot with his three wood was a high right, short shot. He would recover and hit the green, but the swing was there, waiting, lurking. He did it one more time on the front nine on four. A masterful chip and par-saving putt meant he was able to keep a bogey off his scorecard.

It seems to have stayed away for the most part until the tenth tee. He hit basically the identical shot. Then again with the drive on eleven. I suspect if you’re reading this, you know he did it again on twelve with tragic consequences. He did it one more time for good measure on seventeen as well. It is clear that his swing change had not yet been baked into his swing.

This is one of the things that make golf such a hard sport. No matter how many times you make a swing on the range you just can’t replicate the pressure and intensity of the final round of a major. So the reality is, it is simply not about repetition for Jordan, to truly trust the changes, he needs the test of major championship golf. Unfortunately for him, it was clearly not ready for prime time. 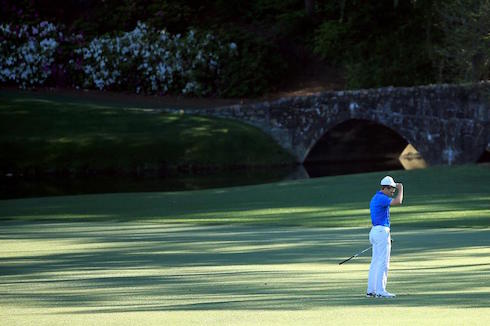 There will be debates on whether or not Jordan choked. I say no. He simply needs more time to tune the swing changes he is trying to make and have them be able to handle the pressure of the back nine of the a major championship. He showed that even after the disaster of twelve he was able to turn it around birdie thirteen, and hit it pretty close on sixteen. He showed heart and grit to attempt to make a comeback. He putted great the entire week and his run to close the front nine was breathtaking. He will put this Masters behind him and go on to be a great golfer. This effort will barely be a blip when we review his career later.

I think most of us golfers can take solace in what happened to Jordan. We need to understand the time it truly takes to make a major swing change and that only the test of tournament golf can truly test the change you have made. That even guys on the highest level can struggle when trying to make a change like this.

For what it’s worth, if Spieth wanted to increase his swing speed and hit it farther, whatever he is doing is so far isn’t working. In 2015 Jordan’s swing speed measured on the PGA Tour was 112.8mph. So far in 2016 it is 111.6mph. So he has actually lost 1mph. We can say that 1mph is probably the margin for error, but still, it really isn’t going up. Neither is his driving distance 291.8 to 292.3 and his driving accuracy is basically the same as well. Of course we all know that making any kind of change takes time and he may not see the affects of his change for a year or more. Or even maybe Jordan decided to make no change at all, the only one who really knows is him.