Yes, it’s a stick that costs $99, but read on to find out why that’s more than the sum of its parts. 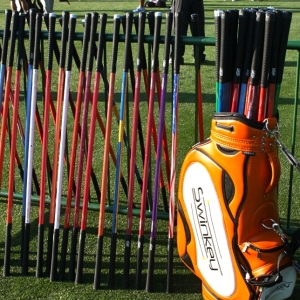 The lyrics for the song used to help advertise the children’s toy the Slinky included the line that “for fun it’s the best of toys.”

If the Swinkey – dubbed “The Golfer’s Toolbox” – were the product being marketed by a song, the line would read “for golf it’s the best of tools” or something, and except for the fact that many would be unable to get the damn song out of their heads, it wouldn’t be far from the truth.

The Premise
Golfers have, for a number of years at least, been using an assortment of tools to help them practice. We’ve bought $2 driveway markers from Lowe’s (or $20 “Tour Alignment Sticks” on the Internet) to help with alignment. We’ve bought crochet needles and elastic string to help with our putting aim. We’ve bought things to protect our clubs when traveling, GorillaPod tripods to attach our cameras to our bags when filming our swing. We’ve bought heavy donuts to help us stretch before the round. 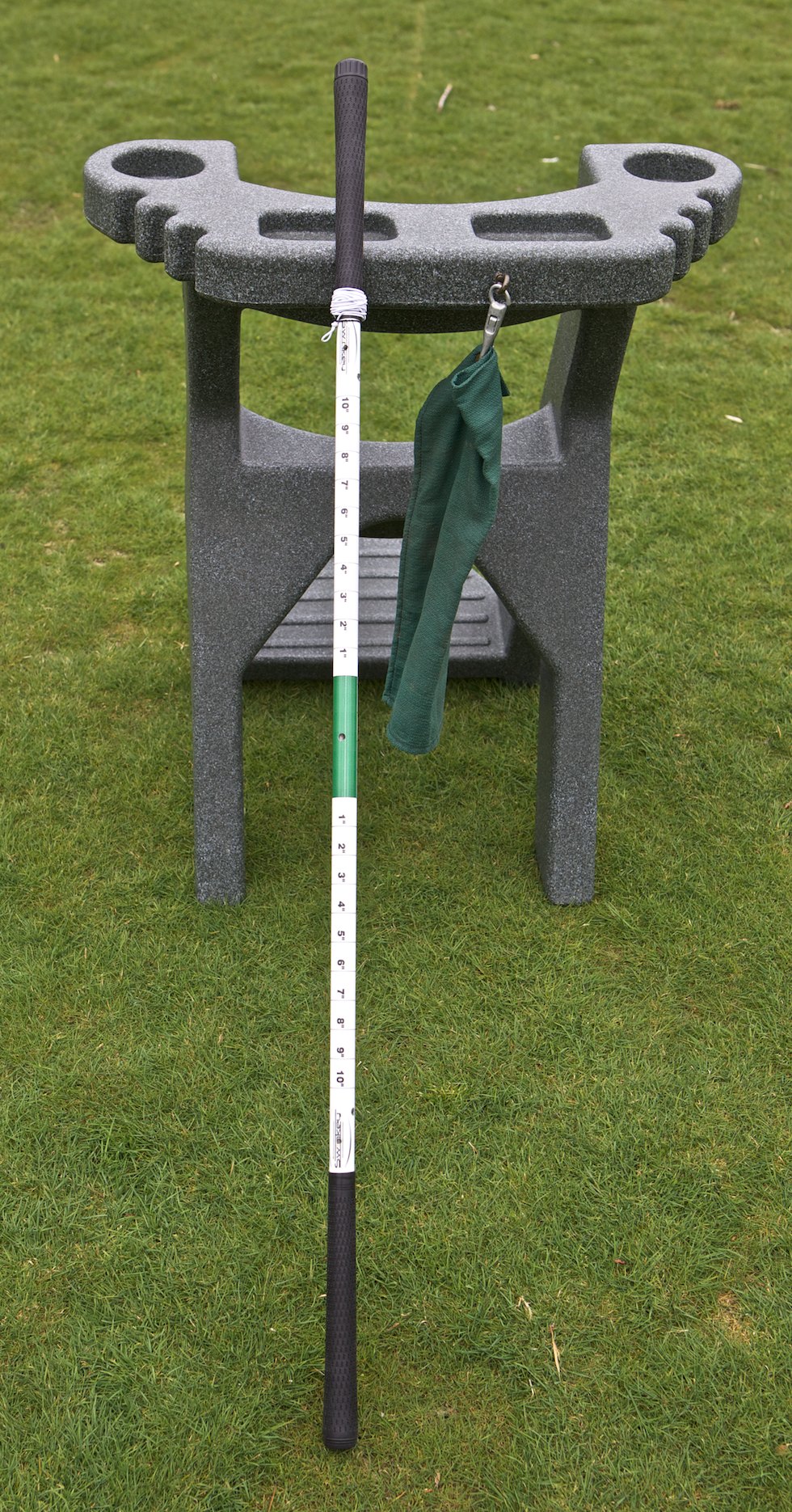 The Swinkey aims to do away with all of these individual tools, consolidating them into a single, easy-to-use, multi-purpose package.

The driveway markers are included. The elastic string and knitting needles. The driver protector for travel, the tripod, the weighted warmup club, and more. The Swinkey also helps you stretch and groove your putting stroke. The AimPoint-branded Swinkey in this review will help you with your AimPoint reads as well, as it features a ruler along the pole to help with proper aiming.

Construction and Build
The Swinkey is a single 49″ long tube with golf grips at each end. The tube is 1.25″ at the widest part (the butt end of each grip) and tapers to a metal tube that’s less than an inch in diameter. The body of the tube has three holes that go through the body: two small ones just inside the end of the grips and one larger one in the middle.

A cap on one end of the Swinkey unscrews and reveals four rods stored inside. Two are metal and measure 11″ with a small collar nearly one inch from the end. This collar stops the rod from going through the smaller holes inside the ends of the grips. The longer white non-metal (they seem to be a durable plastic) are 48″ long and are slightly thicker, fitting into the hole located in the middle of the Swinkey.

The cap that screws off has a Philips screw that extends from the cap slightly to support any camera with a standard tripod/monopod mount. The elastic cord that comes with the Swinkey can be wrapped around the outside of the Swinkey for safekeeping. 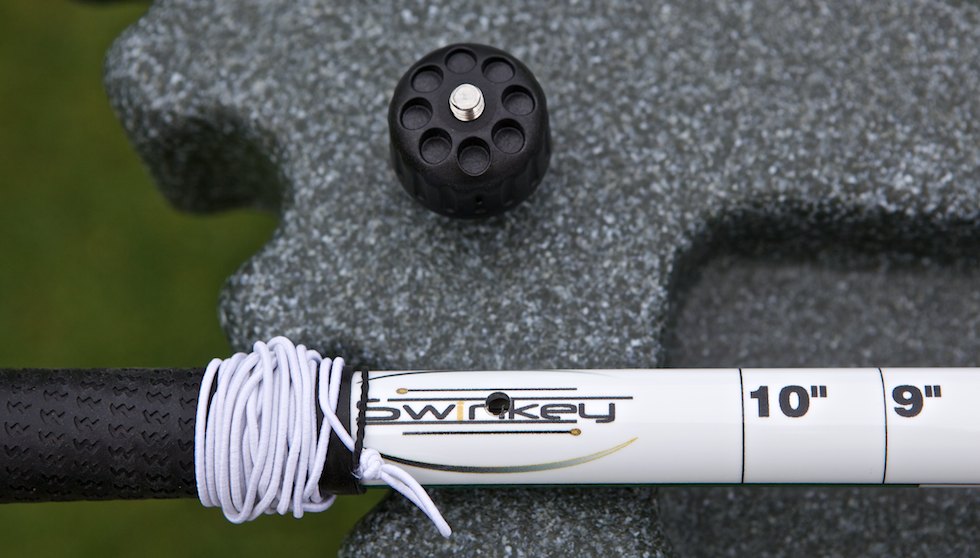 The cap has a small screw that will attach to the tripod port on virtually all cameras, turning your Swinkey into an instant monopod!

Swinkey in Use
Given the Swinkey’s role as a multi-purpose tool, let’s take a look at all of the uses individually.

Fitness Bar/Stretching Pole
Let’s get this one out of the way first. The Swinkey is a 49″ pole. It’s both lightweight and sufficiently sturdy to be used as a stretching pole.

One of the more obvious stretches includes placing the Swinkey behind your neck with hands over each ends, setting up in golf posture, and turning your shoulders on their inclined plane. It’s a great way to stretch your muscles prior to a round.

There are of course a number of other stretches that come to mind, and in this video showing Swinkey user Alex Riggs, he demonstrates a number of them:

The Swinkey blog also maintains a relatively thorough list of “Fitness functions” worth checking out.

Adjustable Weight Swing Club
This one’s fairly straightforward as well. If you’ve seen the advertisements for weighted swing clubs, then that’s basically what this is. Though I’m not too keen on the science of swinging heavier clubs (outside of stretching – and there are better stretches – most of the studies I’ve seen show that swinging heavier things will slow your swing speed, not increase it), if you’d like to swing the Swinkey, it can be done. Leave the rods in for a two-pound Swinkey or remove them to save half a pound.

Setup System
The Swinkey can be configured to monitor your setup in several ways. There’s a video on the Swinkey site, and a few photos here, but I think you get the idea. 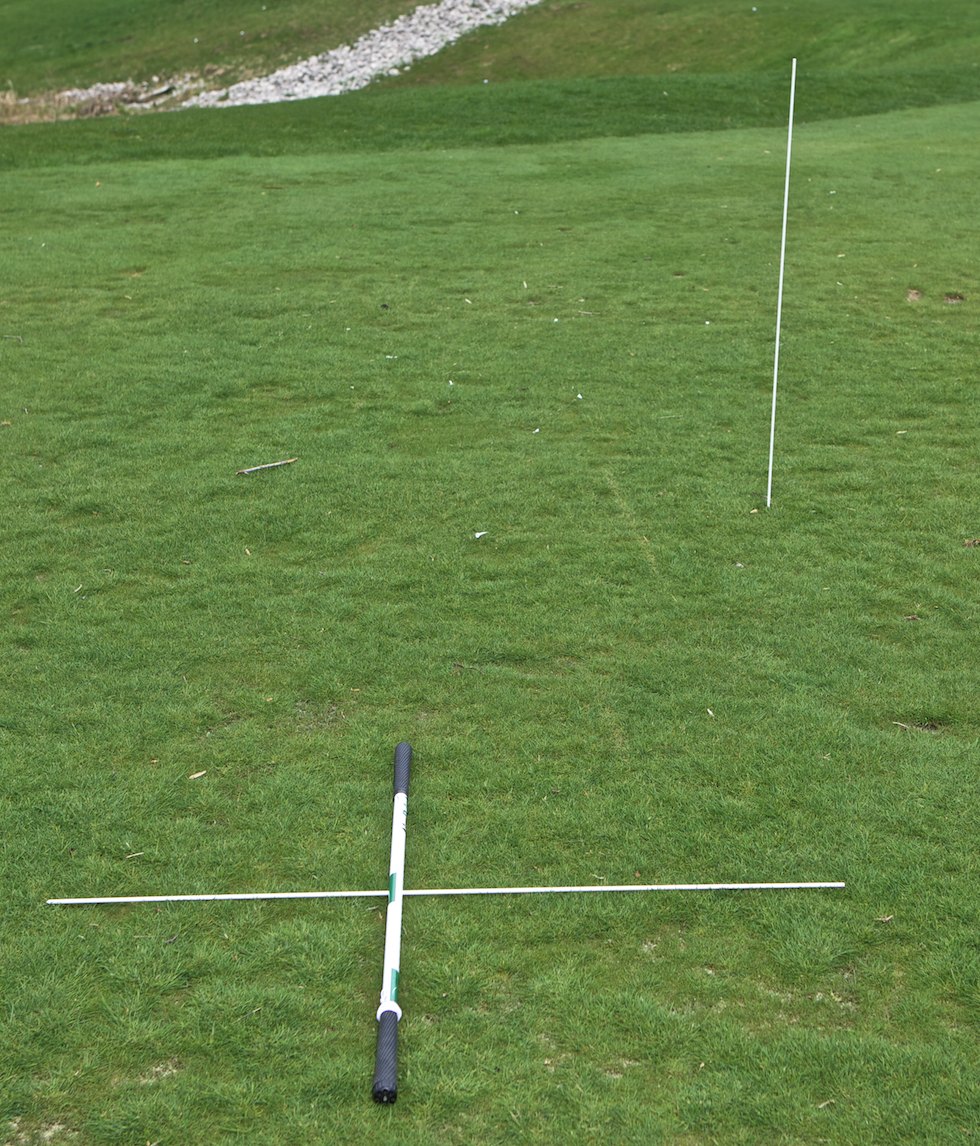 One of the most obvious ways to set up the Swinkey is as shown above. I like to thread one of the long sticks through the middle of the Swinkey for monitoring both ball position as well as foot alignment. The second stick can be placed on the target line so that you can practice starting balls left (for a fade) or right (for a draw) of the target.

Of course, the sticks can be put in the ground against your hips to monitor (or encourage) hip sway or slide. You can put the metal stakes in the Swinkey and put them in front of your shin to help prevent your knee from kicking in. You can put them on the target line outside of your golf ball to help cure shanks or an over-the-top move. I’ll sometimes put the sticks in a “V” when I’m working on swing path (the “visual equivalents”).

It’s a versatile system, what with two shorter metal stakes, two longer ones, and the Swinky itself. We’re still coming up wit ways to use them.

Driver Protector
When I’ve traveled in the past, I’ve taken a 48″ broom handle and stuck it in my bag. It lacked the “mushroom” head seen on the

The Swinkey is a bit cooler than using a broom handle, but serves the same purpose. It sticks out farther than your driver and ostensibly will take the brunt of any impact caused by careless baggage handlers tossing your clubs around.

Folks with a long putter, well, you may be out of luck.

Camera Monopod
The Swinkey has a quarter-inch threaded screw in the cap that can be unscrewed to extend, and then to screw onto a camera’s tripod mount. While this is great in theory, and will likely work on occasion, this aspect of the Swinkey is perhaps one of the more underdeveloped and/or useless aspects. Unless you can stand the Swinkey up vertically – requiring something to lean it against or a bag that will stand vertically (not inclined like a stand bag), the lack of adjustability makes for a tough situation. 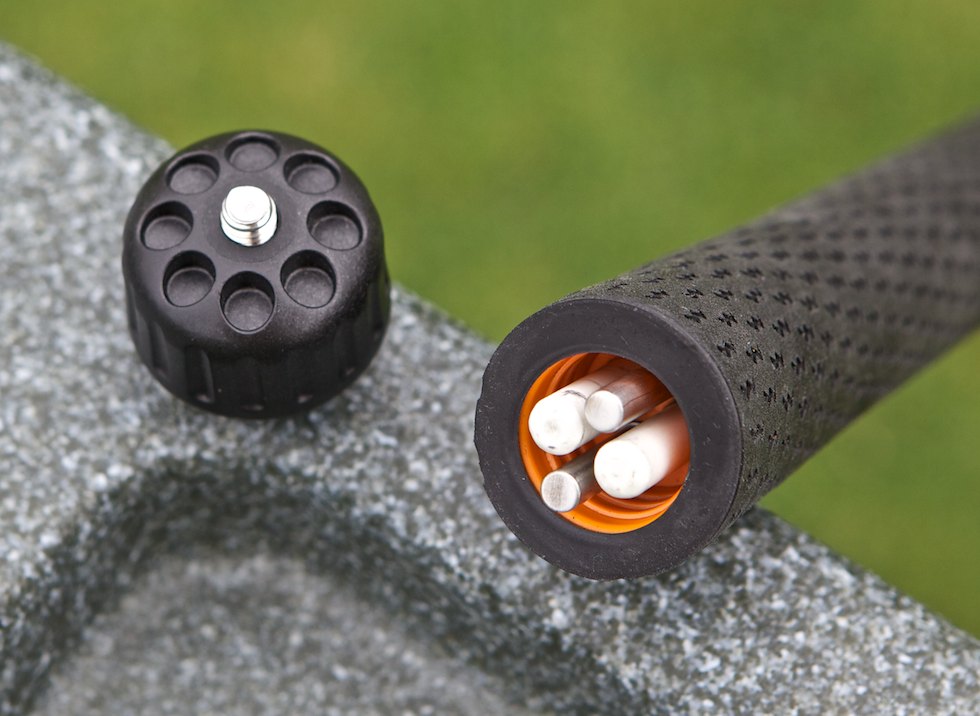 In every case, you’re almost better off getting an actual tripod with some adjustment capabilities or even a GorillaPod. They’ll offer you the adjustability you need that the Swinkey simply cannot offer.

Don’t get me wrong – it’s nice to have, and it takes up no room and adds virtually no weight. It’s just that it’s more “small bonus” than “nice feature” or “selling point.” 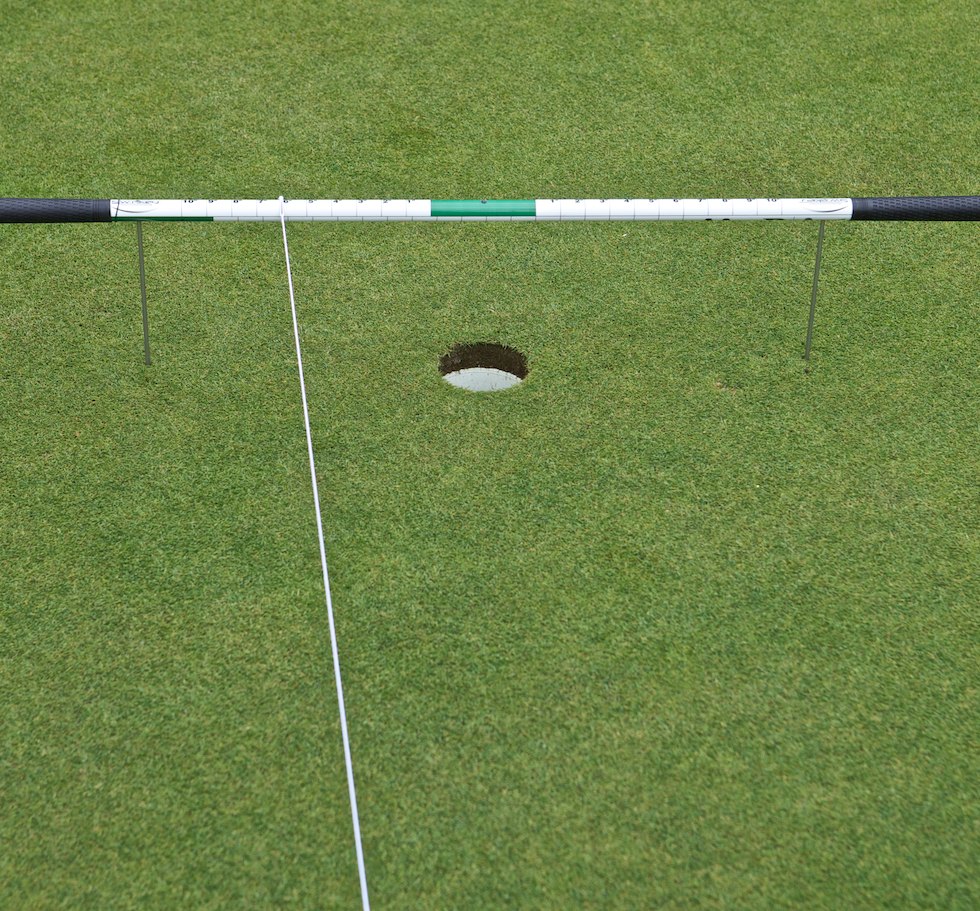 Putting Trainer
As great as the Swinkey is as a setup system on the range, it’s better on the putting green. The same basic usage applies – you can set up a “+” configuration to monitor your stance and ball position. You can make a “track” with the two long sticks to either guide your putter or the starting line of your golf ball. You can shove the metal stakes in the ground to set up a “swing plane” guide (moving your shaft along the Swinkey will result in an on-plane putting stroke – your setup determines the plane in this case) quite easily as well. 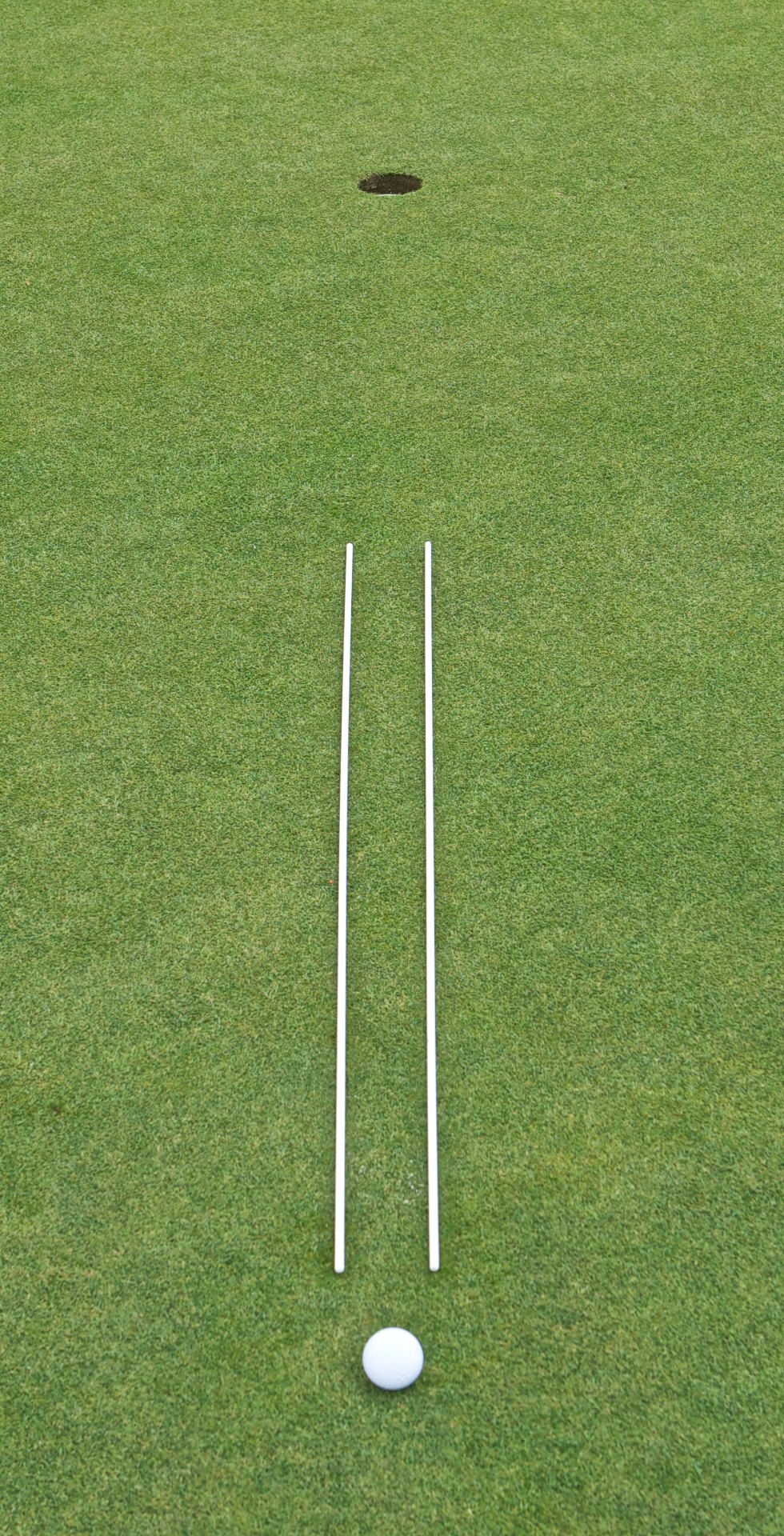 Though it’s not specific to the AimPoint model seen in this review, the best use for the Swinkey on the putting green may be putting the center, marked with a 4 ¼ cup, directly over the hole. Connecting the elastic string to one of the metal spikes at one end and a measured distance at the other end and you’ve got a perfect “aim line” – perfect for working on your start direction and speed control. 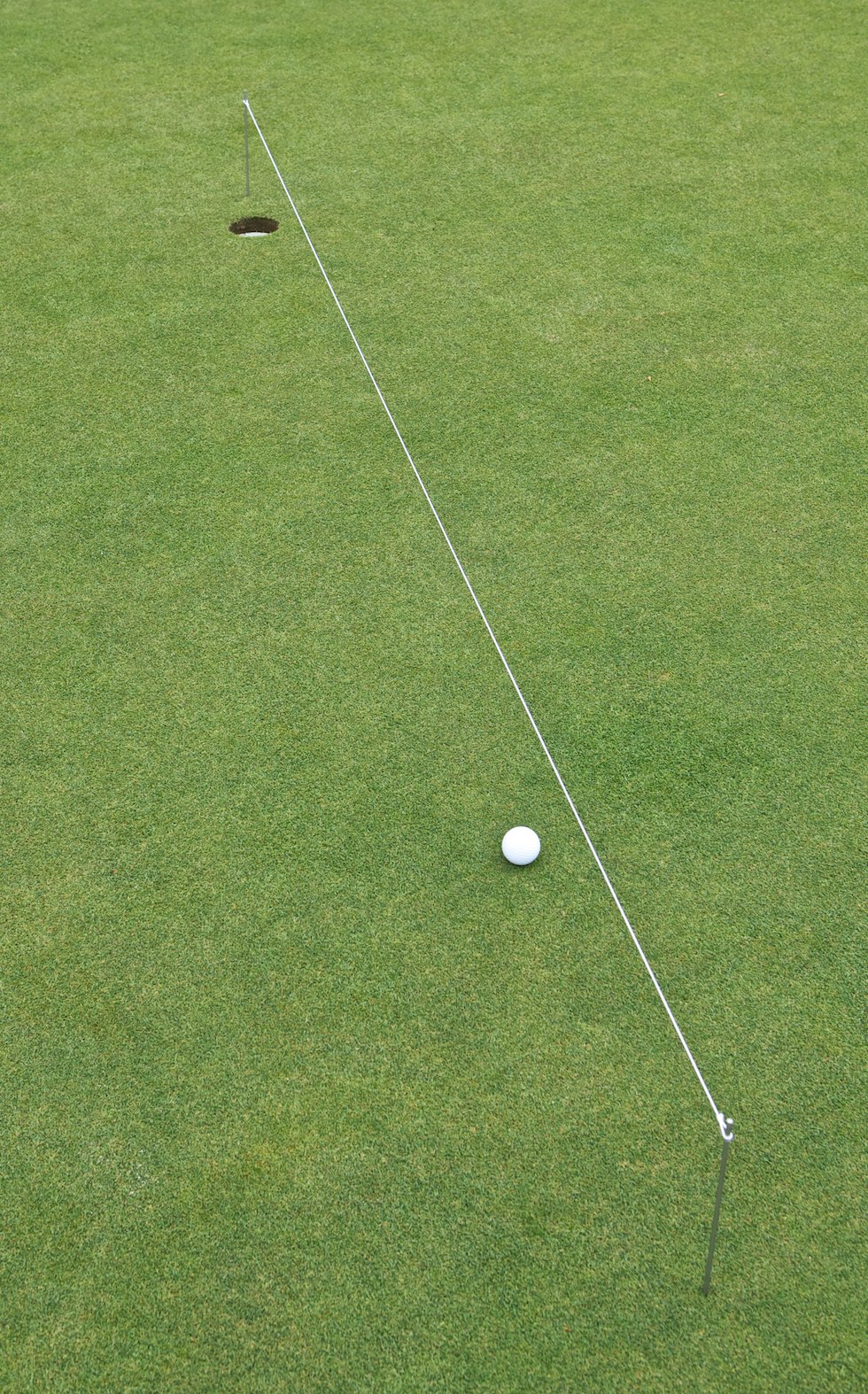 A simple aim line on a straight putt will help me visualize starting the ball on-line.

But the Swinkey doesn’t cost more than all of those things combined, nor is at as clunky as carrying 10 different things around. It’s far less expensive and far less clunky.

The Swinkey hasn’t left my bag since I got it, and I enjoy finding new ways to use it.