Surprisingly, we can print them all.

Few sports, with the possible exception of cricket (“That was a wicked googly.”), have as colorful or specialized language as golf.

We have words that describe certain kinds of holes, like “redan,” which has become a general term to indicate a hole, usually a par three, with a right-to-left diagonal green that slopes away from the line of play and from right to left. The name comes from the original Redan at North Berwick Golf Links in Scotland, which in turn was dubbed with the French term for a V-shaped fortification that faces the expected angle of attack.

We have “pars,” “birdies,” “eagles,” and “albatrosses,” which are all good things. We have “chili-dips,” “chunks,” and “claggy” lies, which are all bad things. A claggy, by the way, is a wet, muddy lie that borders on casual water.

We have words that we hardly ever use any more. When you commit a “baff” you hit behind the ball and merely graze the ball, which hardly ever happens on today’s softer, more manicured courses. “Niblick” is an obsolete term for a nine-iron. “Pawky” is an old Scottish term used to describe cunning or tricky play.

And then there are all those four-letter terms that turn up so much during a round of golf. Frankly, they are a bit too common to be considered as the best words in golf, though they certainly have a place from time to time when the game gets extra frustrating.

My criteria for the best golf word is the aptness of its sound to its meaning, its originality to golf, and my own totally subjective bonus point system.

Number Five: “Mulligan”
For everyone who’s ever asked, “Why didn’t I do that the first time?” The mulligan is golf’s version of the do-over. Some sneer at them. Some embrace them. Some call them “breakfast balls.” Regardless, the mulligan is a great golf term. 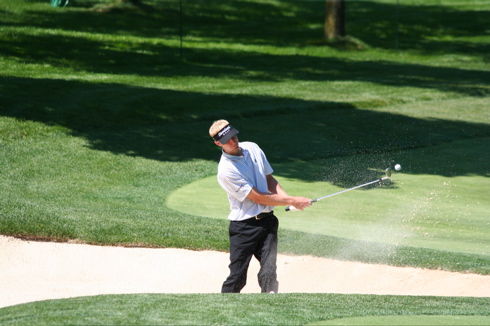 The term comes from the name of either David Mulligan, a hotelier, or John A. “Buddy” Mulligan, a locker room attendant. Suffice it to say, they were both known for replaying shots off the tee, for one reason or another.

Number Four: “Dormie”
Every time the networks cover a match play event, you can count on hearing dormie defined for you multiple times. It’s not a bad thing that they feel obligated to do this. Some people are confused as to whether dormie is a good or bad thing.

For the record, it’s good to be dormie. It means that you are up the same number of holes that are remaining. You’re dormie if you are up two with two to play, for example. You cannot lose in regulation play, and you only have to halve a hole to win the match. 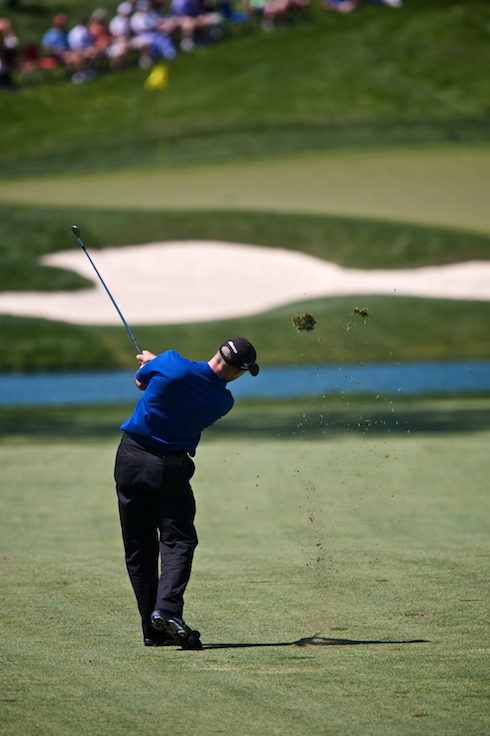 What a great word for those small sod patches we golfers knock out of our courses! The word comes from the Scottish word for a small square of sod used for roofing. In the U.S., the common joke about a large divot is that you could take it home and sod your lawn with it. In Scotland, the same joke, presumably, ends with a new roof for your home.

It’s interesting that the word means both the bit of sod that goes flying (“Please replace your divots”) and the hole left by the departing sod (“That shot came to rest in a divot”).

Number Two: “Shank”
I know I said I wasn’t going to include those off-color four-letter words in this listing. To a golfer, shank is about as close to cussing without actually cussing as you can possibly get. And some folks think its a far worse word than any that George Carlin taught us we couldn’t say on TV. Shank not only describes what we hit the ball with on these gross mishits, but how the thing flies, as well.

Perhaps because we hate to say the actual word for fear of bringing on the affliction, we give it less threatening names like the laterals, el hoselo, or the snap fades. But make no mistake, the word for the thing is “shank.” And it’s the perfect term.

Number One: “Bogey”
As perfect as shank maybe to describe, well, a shank, bogey is just as perfect or more to describe using one more stroke to complete a hole than required by par. Bogey is not as menacing as the shanks. It usually doesn’t cripple your round the way a case of the shanks can. It can actually be a good score for high handicappers or beginning golfers – make 18 bogeys and you shoot 90 at most courses. 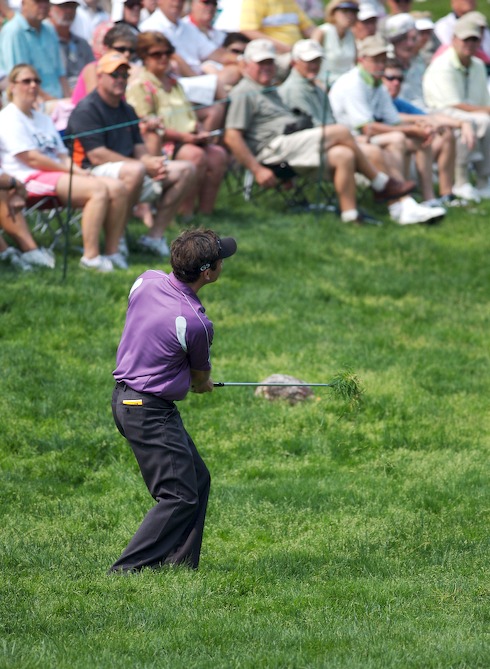 But bogey is still a perfect term for just missing par. It reminds me of the Boogey Man… it can creep up on you and, pow, you’re another stroke over par. I thought I was going to be clever with that analogy, but it turns out that’s exactly where the term comes from. It was first used in Britain, borrowed from a popular song at the time called “The Bogey Man,” in which the title character hid in the shadows.

On top of the scary connection to the Boogey Man, “bogey” just sounds like you made an error. It’s like “I dropped the ball on that one” or “Man, that was a blunder.” That’s why bogey is my candidate for the perfect golf word.

All pictures © The Sand Trap .com. All rights reserved..

4 thoughts on “The Five Best Words in Golf”