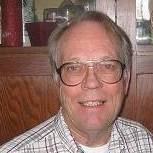 Blue, White, Red, or Some Other Color?