The newest addition to the Adams Speedline series of woods takes an ultra-lightweight approach to increase club head speed. Plus, we get a look at their new players irons, the Idea MB2.

Adams has been rolling out new clubs on the regular lately. Earlier this year they released the Speedline F11 drivers, and now they continue that line with the new Speedline 9088 UL driver, which builds on the numerous designs and technologies we’ve seen over the past few years.

Showing their dedication to not only the low handicappers, Adams released the Redline hybrid/iron set, which had the other 98% of golfers in mind. This week, we see the same dedication to all sorts of players with their release of the new Idea MB2 irons to keep the better player happy, as well as the release of new Speedline drivers and fairways. Follow along as we take a look at some of the newest offerings from Adams Golf.

Speedline 9088 UL Drivers
Leading off this week is the latest addition to Adams’ Speedline series of drivers, the Speedline 9088 UL. The tag line on the product page is “Lighter. Faster. Longer” and it looks like they really mean it. Not only is this driver “aerodynamically enhanced” like a number of previous Speedline models, it also promotes faster swing speeds via lightweight components. 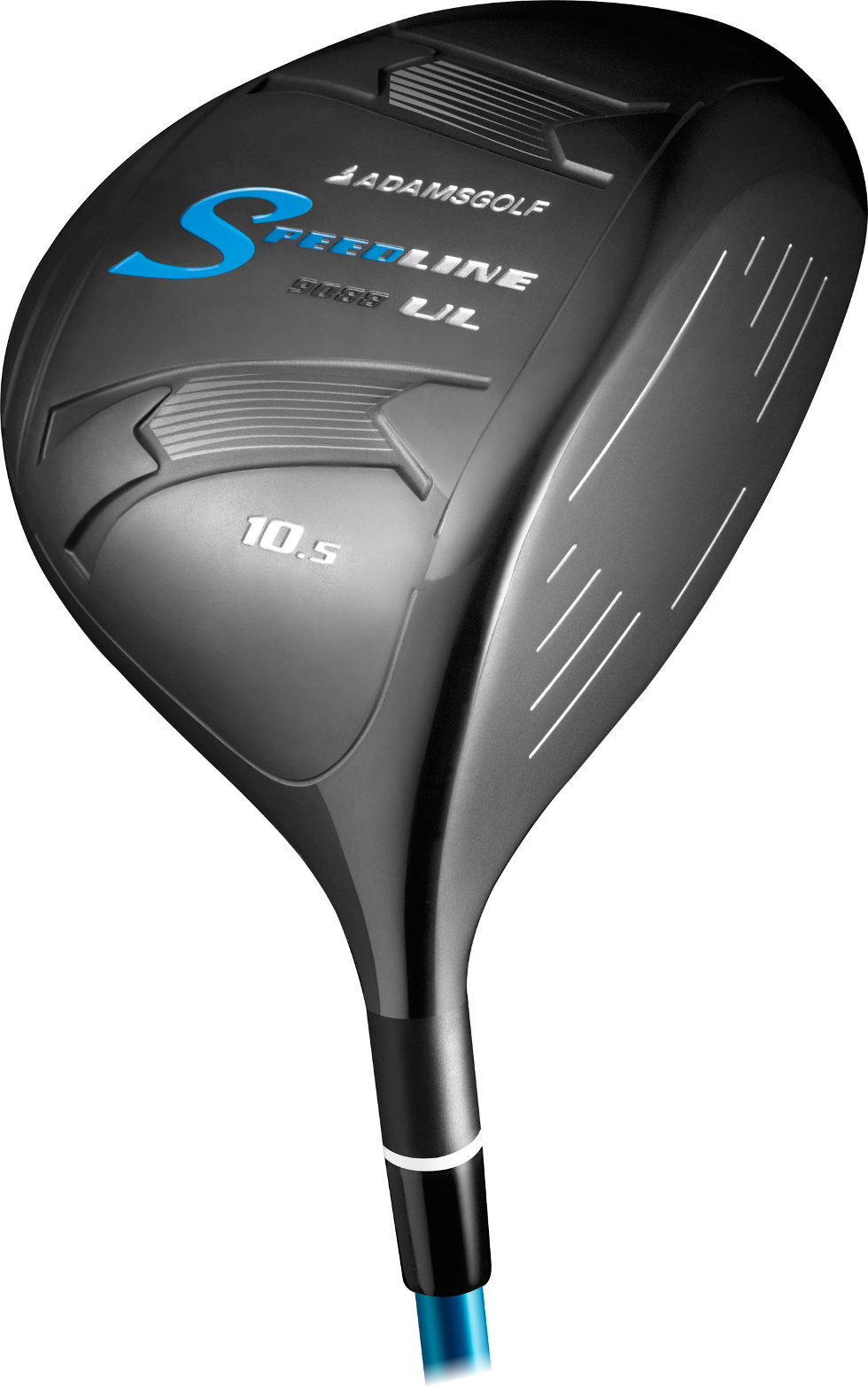 How light is it? The final product rings in at an emaciated 290 grams, and an overall swing weight of D0. If you’re not all that familiar with common swing weights among various clubs in your set, D0 is pretty close to the swing weight of your average iron set. 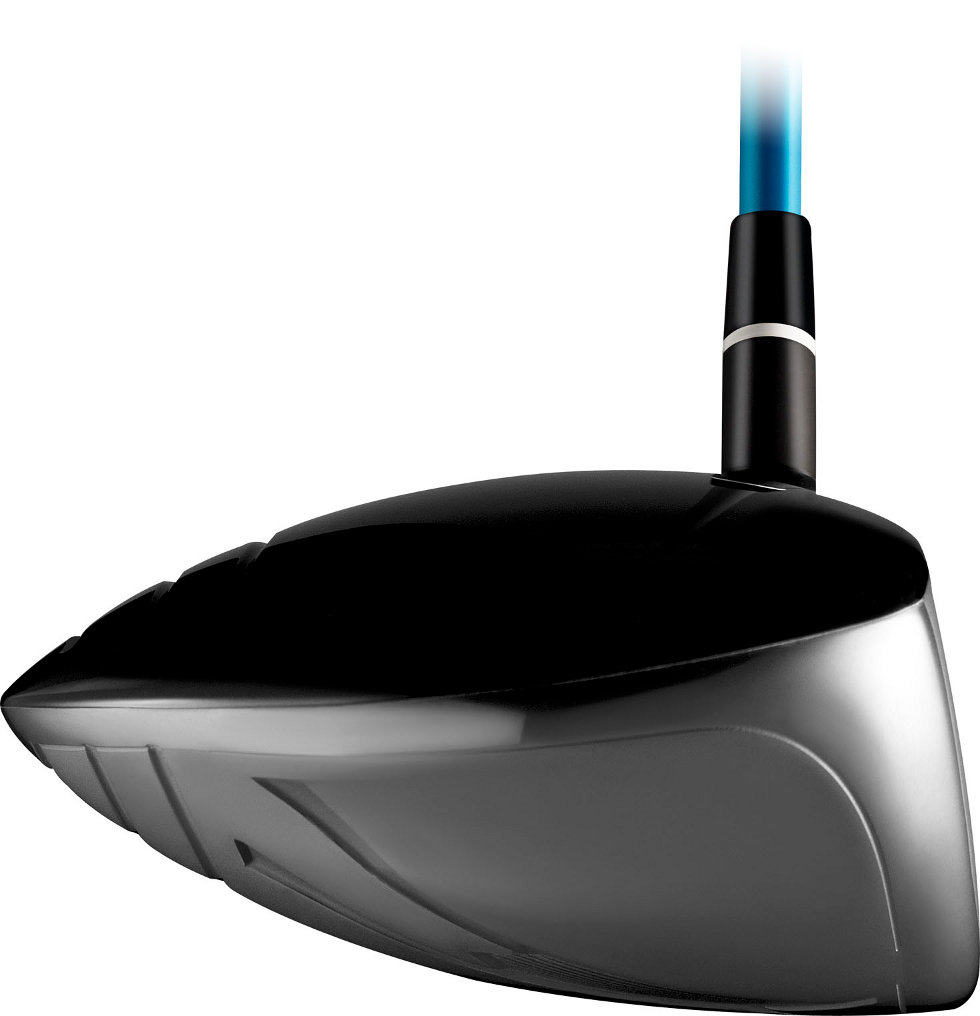 The reduction in weight along with the forgiving 460cc club head result in a reported 13% more consistent distance, 11.7% straighter with less dispersion compared to other lightweight drivers, and a resulting shot that is 8.7 yards closer to the target line. 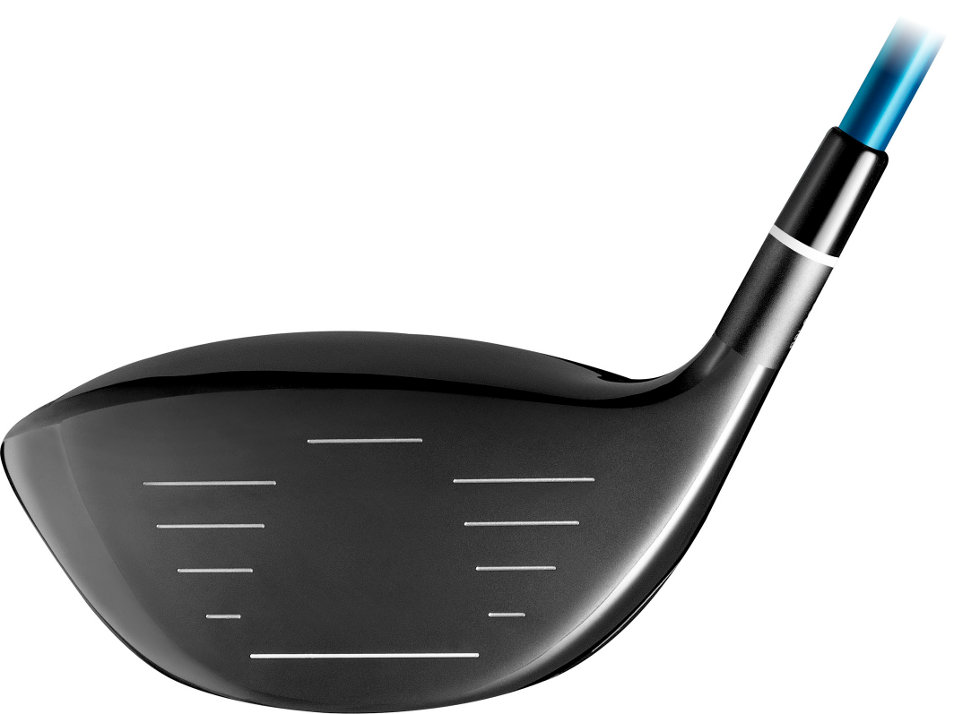 An additional contributor to the increase in swing speed is a 46″ Matrix RADIX shaft. 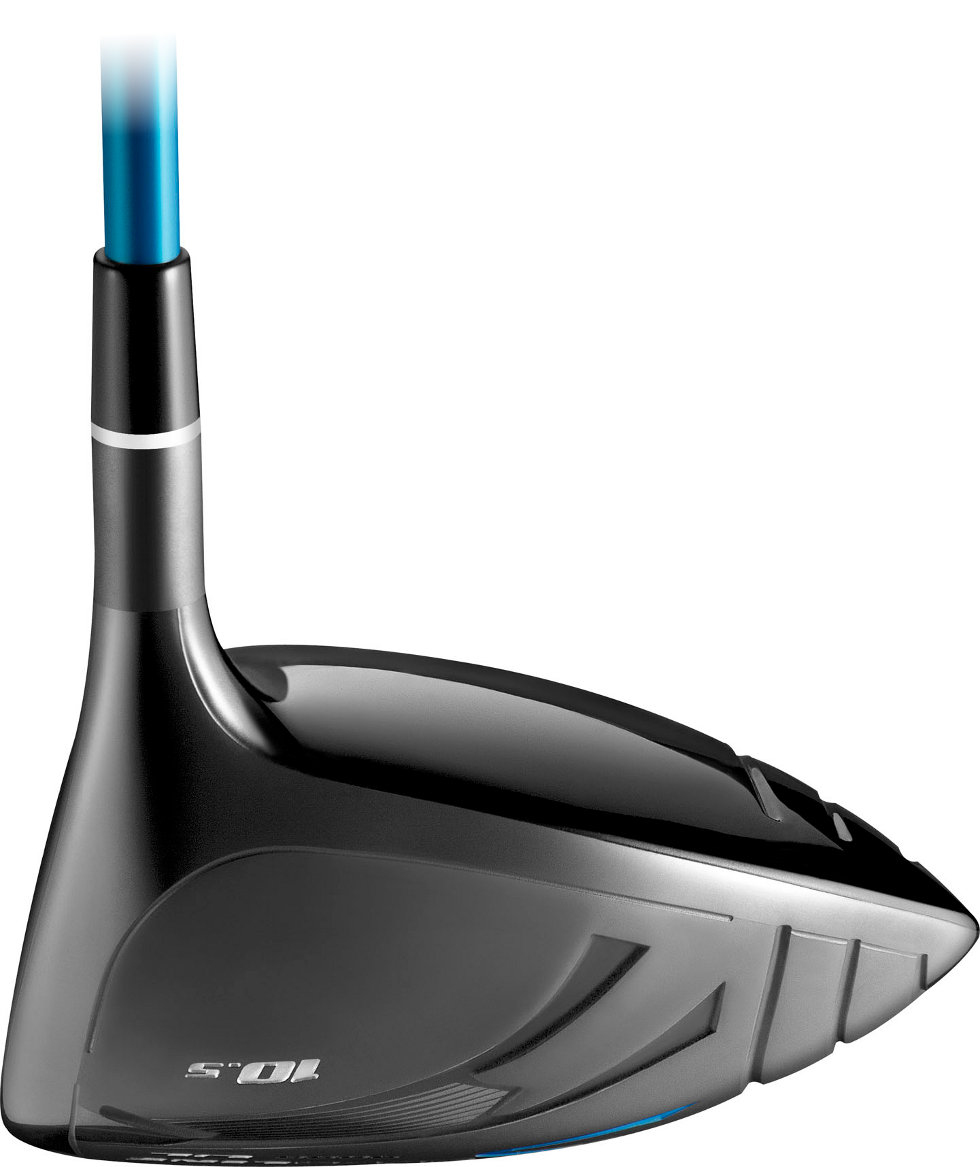 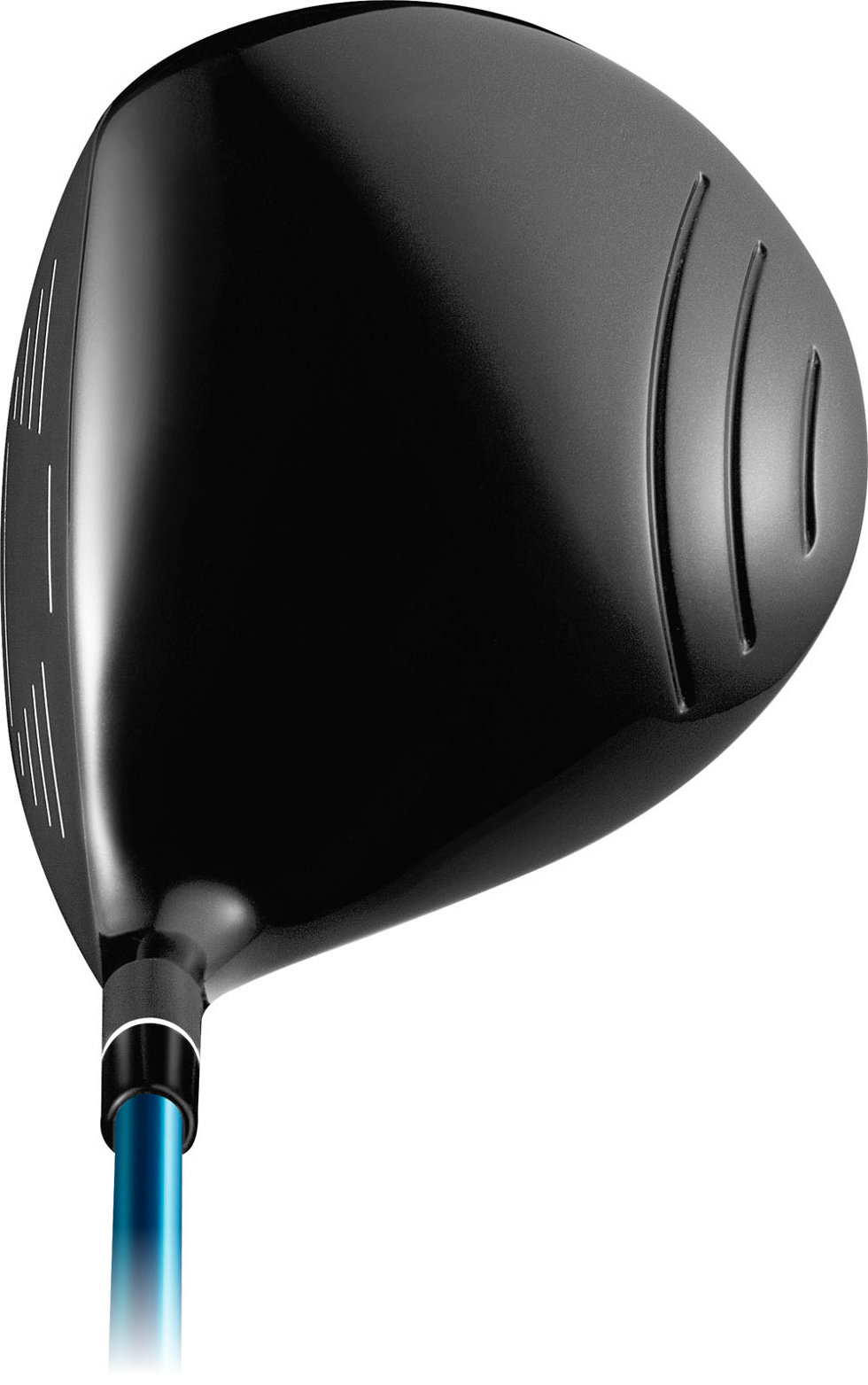 Options & Availability
There are two versions of the Speedline 9088 UL driver – a standard version that sits square at address and a draw variation which sits slightly closed. The standard model is available in three lofts including 9.5°, 10.5°, and 12.5°, while the draw bias version is available in 9.5° and 10.5° of loft. The stock shaft is the Matrix RADIX graphite, in three flex profiles (S, R, and A). The stock grip is the Adams Velvet. Two of those lofts (9.5°, 10.5°, standard (as in non-draw biased) version only) are available in both right handed and left handed variants, with the rest only available to right handed players. The suggested retail price is $399.99.

Speedline LP Fairways
Adams newest fairway wood, the Speedline LP, packs quite a bit in it’s low profile head. Designed to produce a higher launch in an easy to hit package, the Speedline LP looks to be a strong companion to the previously mentioned 9088 UL driver. 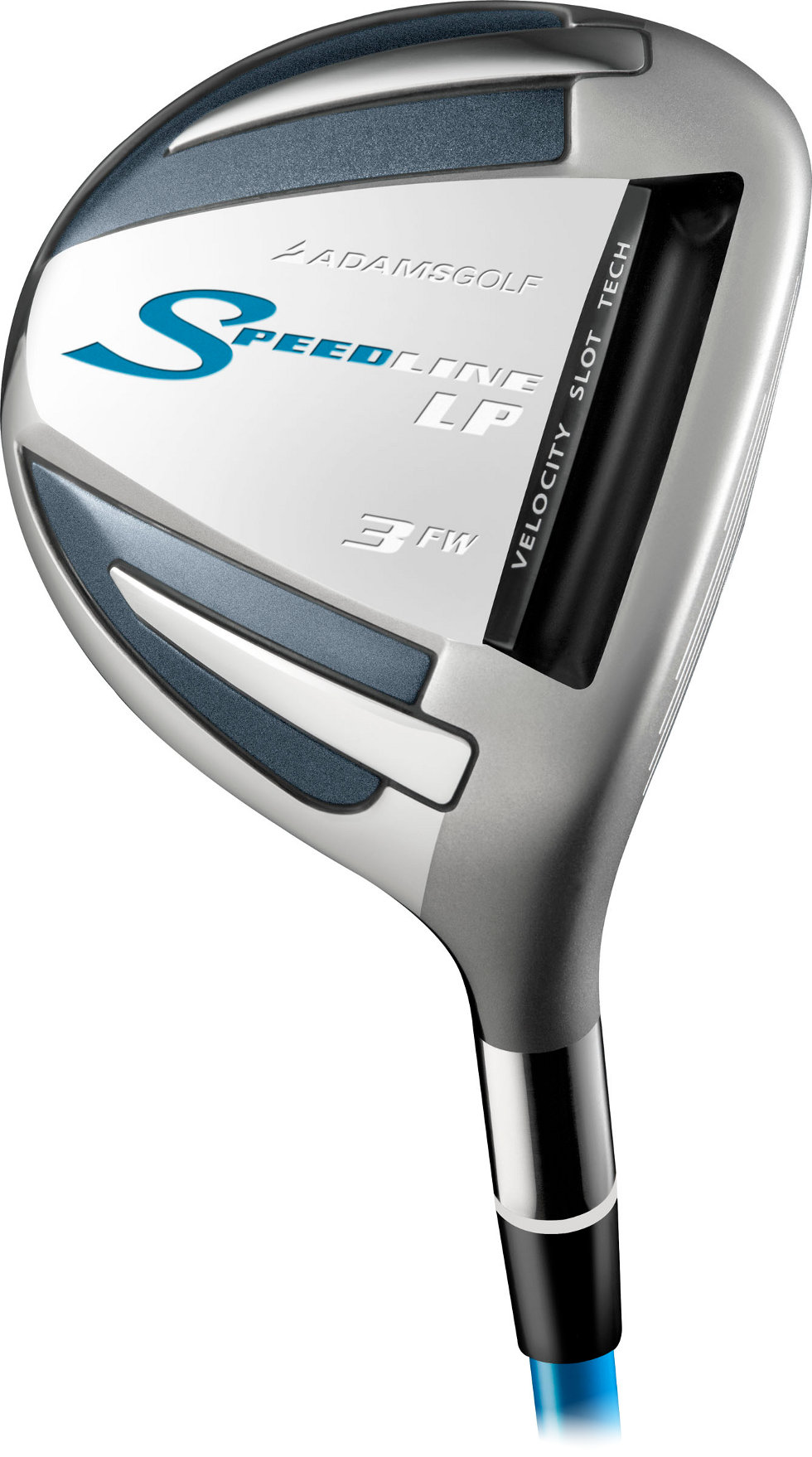 Looking at the crown, the most notable feature is the Velocity Slot Technology, which allows for more of a spring-like effect when the face flexes upon impact. The result is faster ball speeds and an overall increase in distance. Not only that, it also creates a larger, much more forgiving impact zone across the width of the face. 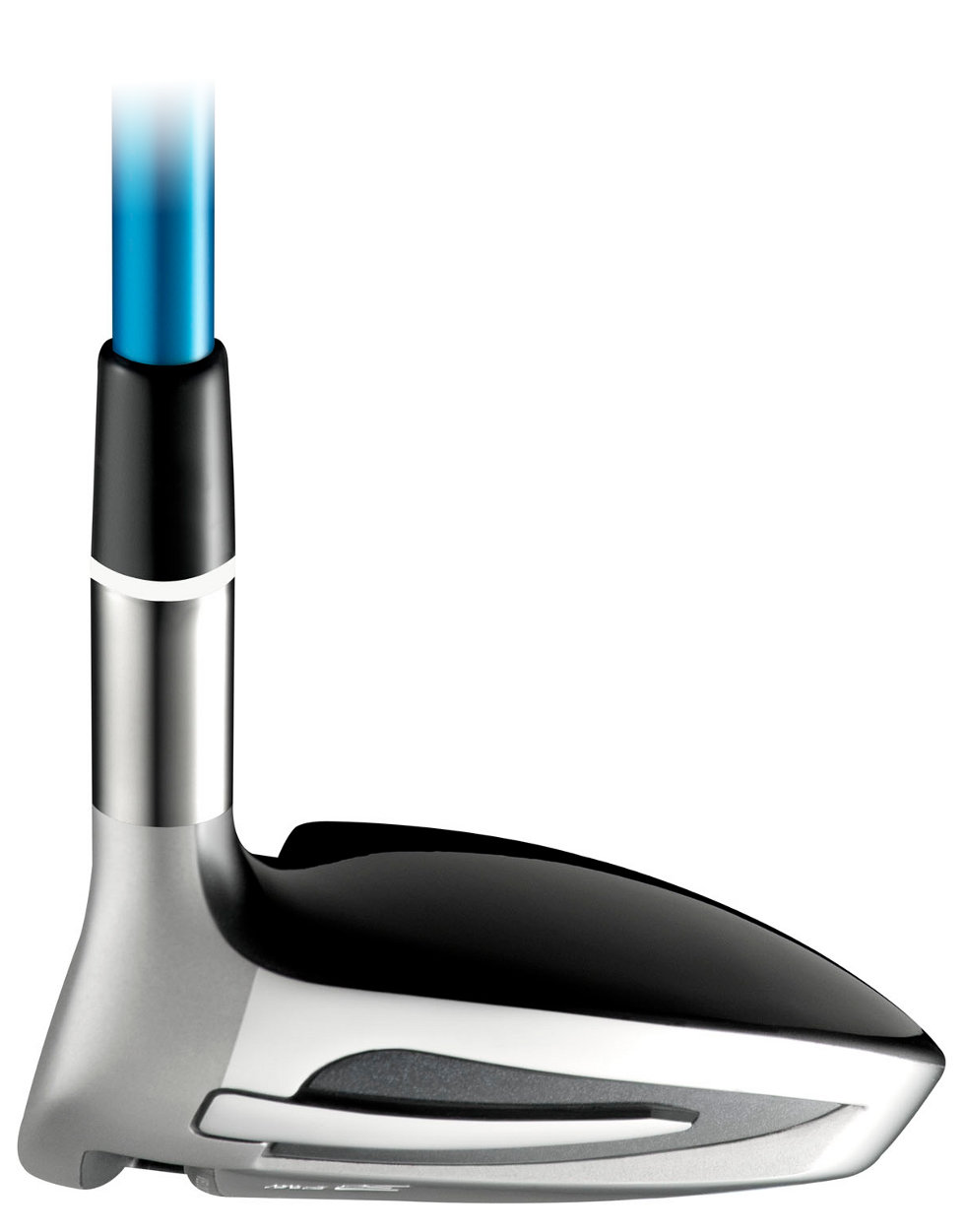 Also contributing the the increase in ball speed is the overall decrease in weight (much like that of the 9088 UL driver) which helps to deliver the club to impact faster. While the driver had a swing weight of D0, the fairways continue that trend as most of them come in at D1, with the exceptions being the 7W (D2) and the 9W (D3). 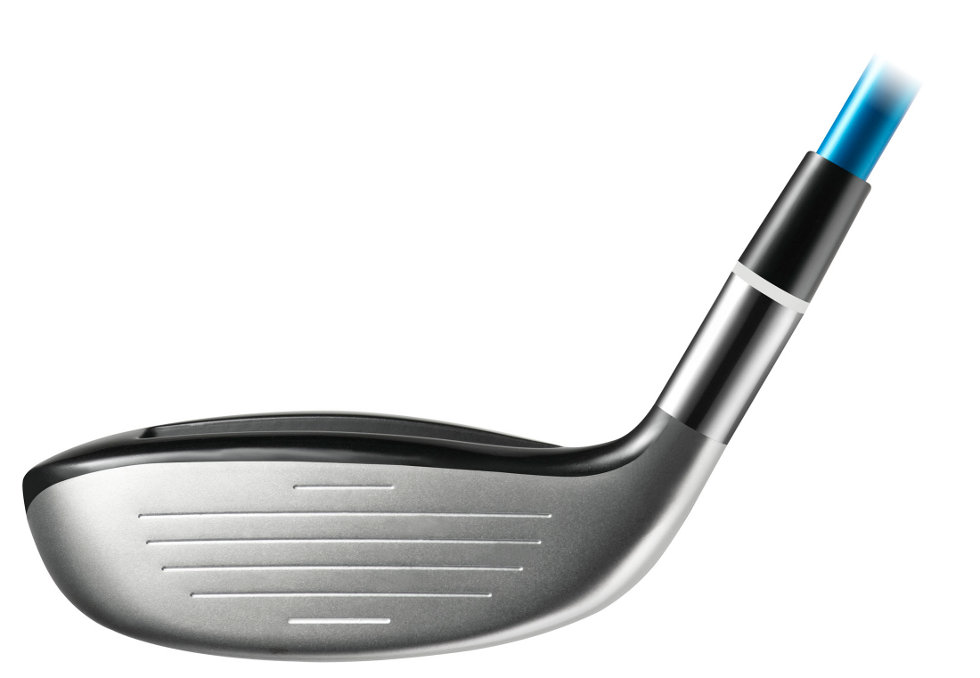 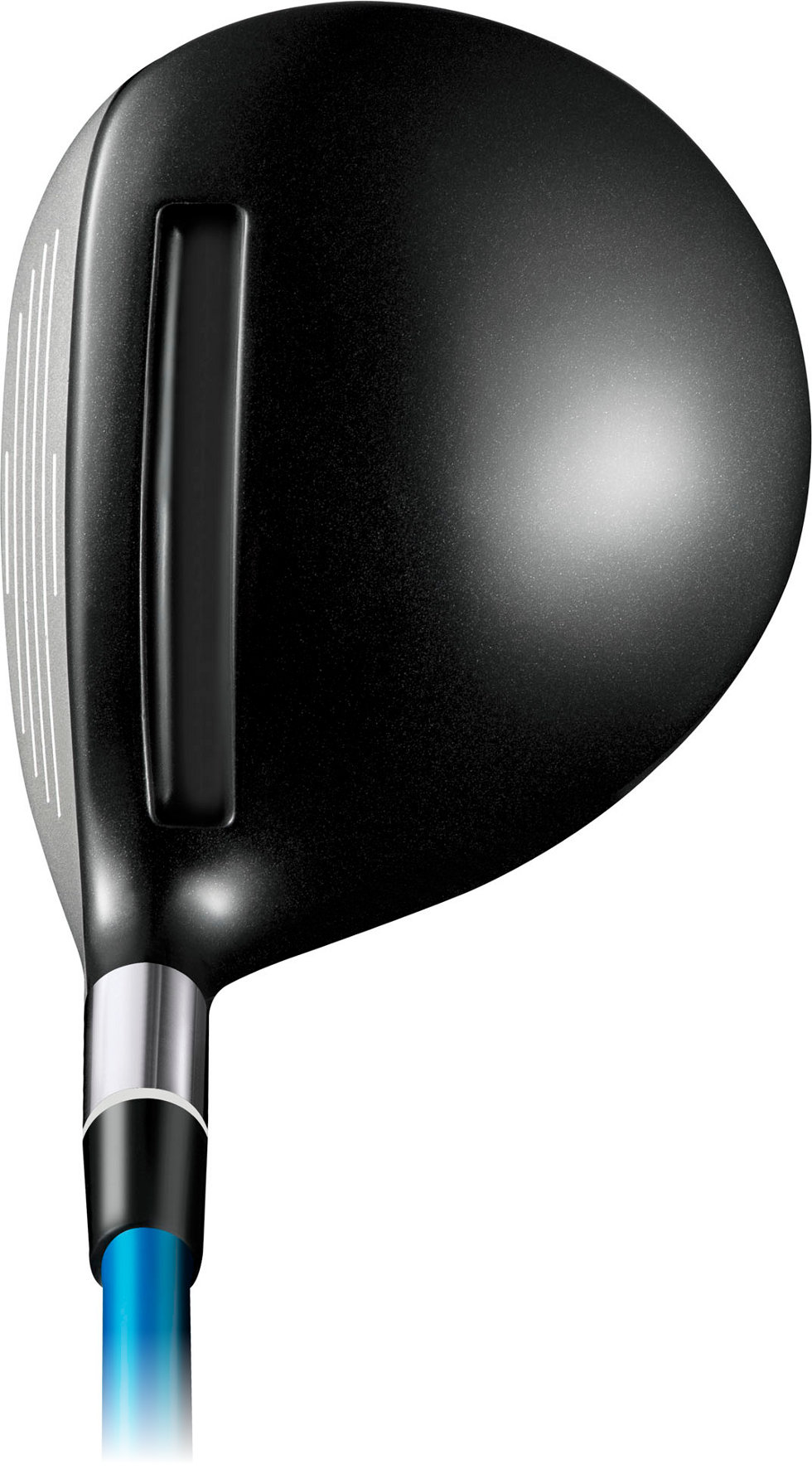 Options & Availability
Like Adams’ new driver, the fairways also come in a standard and draw-biased variation. The available lofts start on the low end with a 13.5° 3+, then moves up through a standard 15° 3W, a 17.5° 5W, a 20° 7W, and tops out with a 23° 9W. The Speedline Draw LP fairway wood comes with a few less options, though they are likely the most popular lofts – a 15° 3W, a 17.5° 5W, and a 20° 7W. All versions are available for right handed players, though the standard Speedline LP 3 wood and 5 wood are available in left handed models as well. This fairway follows suit with the driver, as it comes equipped with a Matrix RADIX shaft, topped with a Adams Velvet grip. Expect to pay around $200 per fairway wood.

Idea MB2 Irons
Already, the new Idea MB2 have gotten one pretty prominent fan in the form of Tour player Aaron Baddeley, who took to his Twitter account to declare the MB2s in one word – “AMAZING!!”. As you can probably gather, if a player like Baddeley has them in the bag, they are targeted towards the better player. 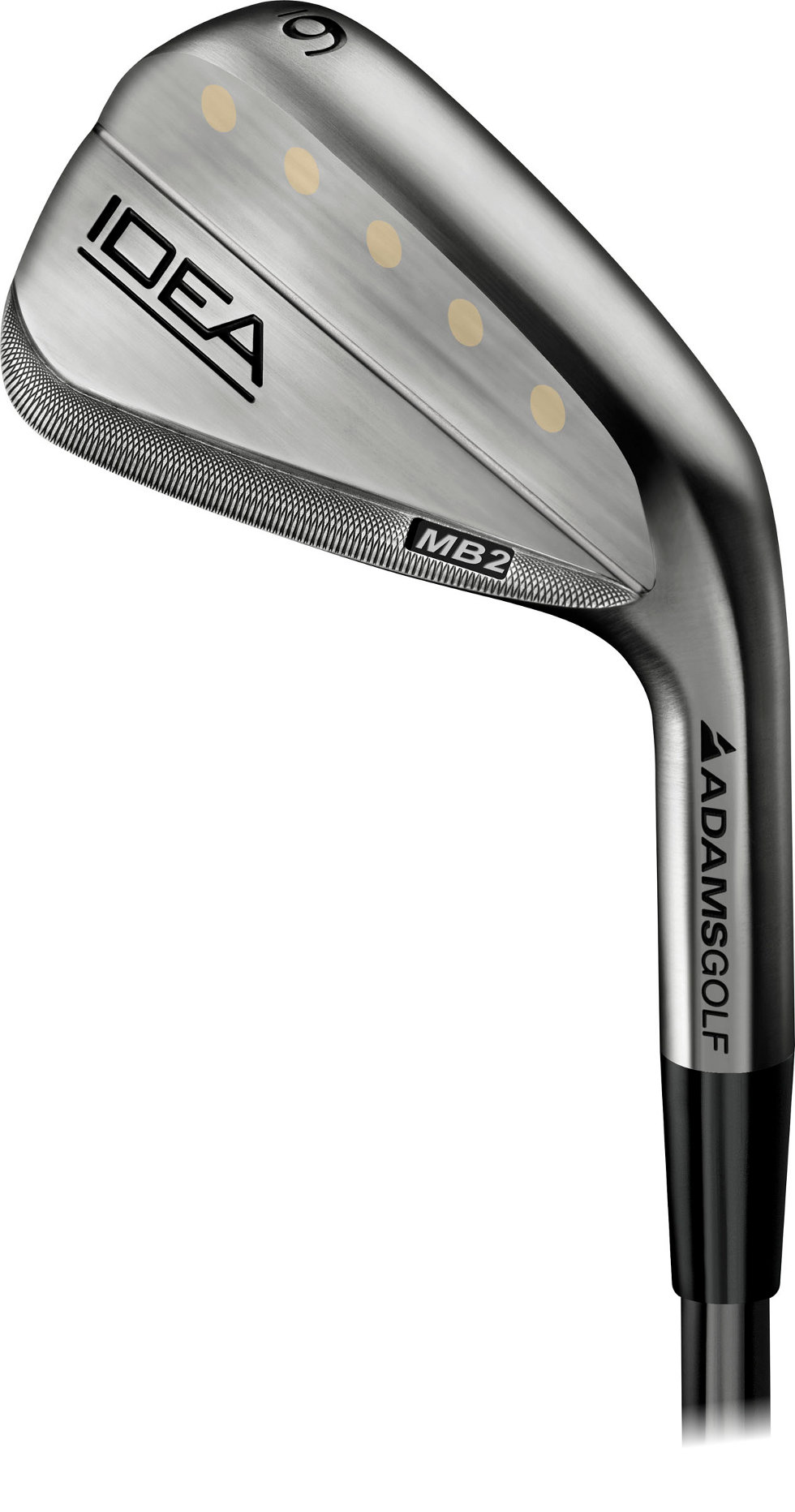 These new muscle back irons come in an attractive raw finish, which according to Adams, allows for maximum groove volume and better feel. As you can see in the above picture, they sport brass weight plugs in the sole which allows for the center of gravity to be located lower for accurate shot shaping and excellent control. 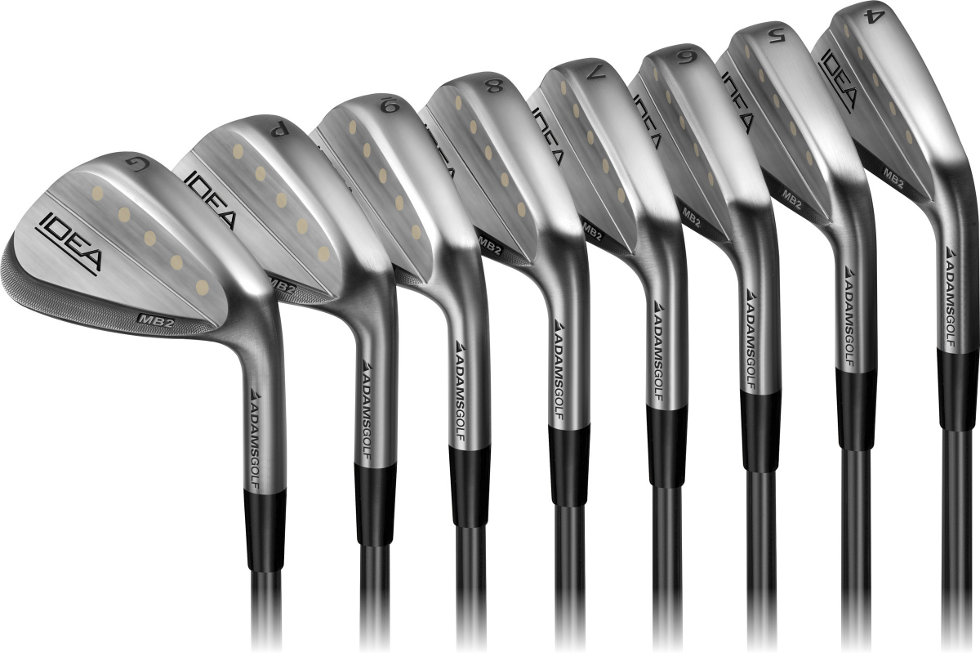 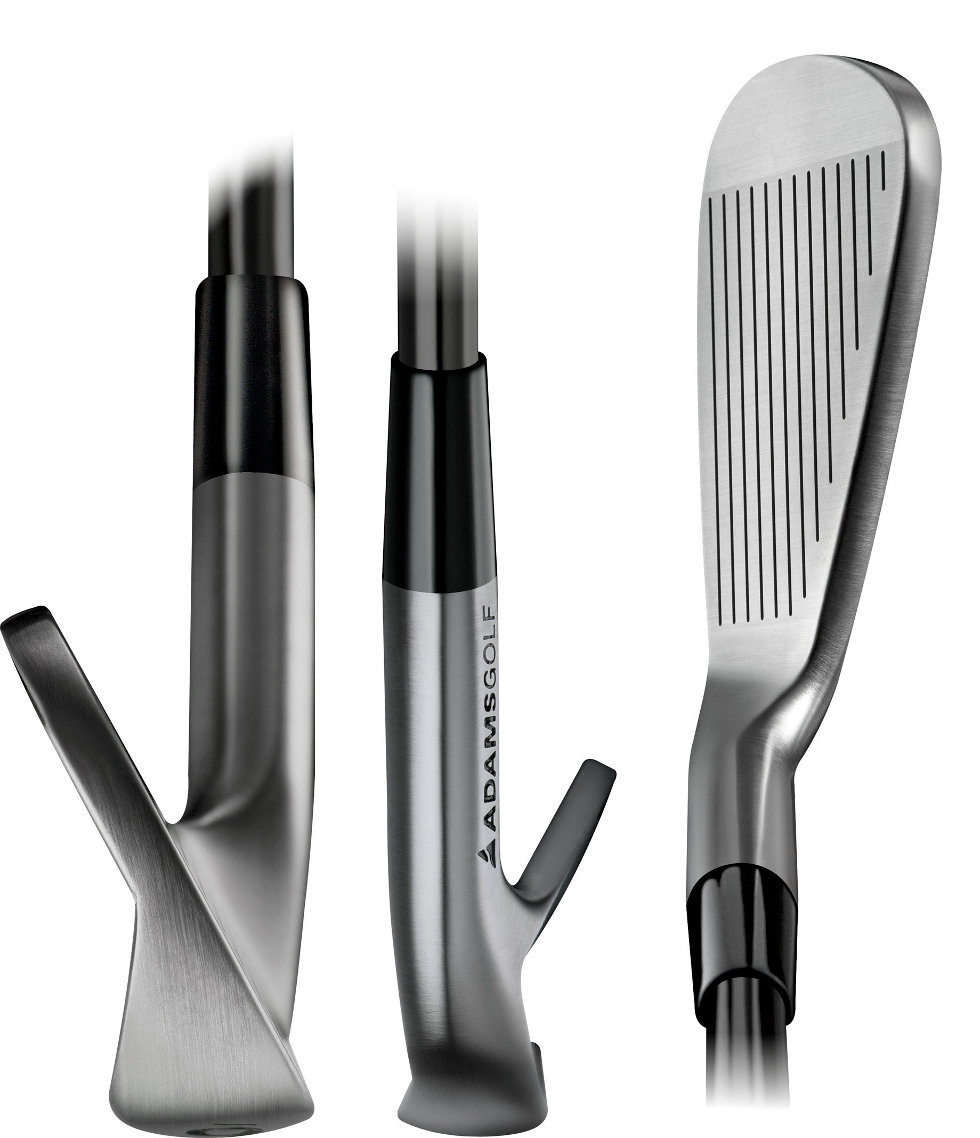 Options & Availability
The Idea MB2 Irons give you a number of options, as the line ranges from a 21° 3-iron all the way up through a 50° gap wedge. Stock shaft(s) come in the form of a steel KBS Smoke Tour or Mitsubishi JAVLN graphite. Both are available in regular, stiff, or x-stiff flex. Regardless of whether you choose steel or graphite, you’ll get treated to the Golf Pride New Decade Multi-Compound grip which comes standard. They are currently going for $999.99 on Adams’ store. 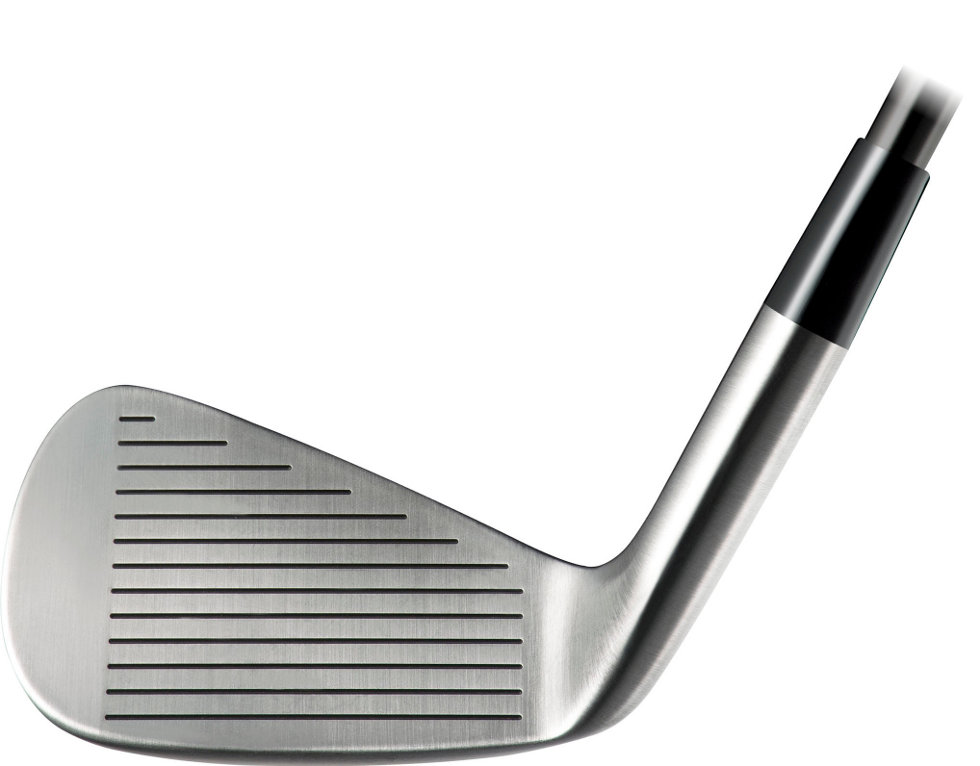