Tournament rules, read them, know them , love them

Sorry for the TST Rule Quiz hiatus, Sand Trappers, but I am back and ready to test your rules knowledge. I mean you can never know the rules too well, right?

In this third installment of the Rules Quiz, we delve into some useful rulings for tournament play. My hope is that after reading this someone out there who is sitting on the fence trying to decide whether or not to start playing in their club’s tournaments will feel confident enough to go ahead and join up. The rules are there to help you, and for the most part are fairly simple if you get the basics down. For all the lesser known rules, you can carry a USGA Rule Book. The point is there is never anything bad about playing by the rules.

Back to the basics

Hello again, and welcome to the second installment of The Sand Trap Rules Quiz. In the first quiz, I concentrated on some of the lesser known rules of golf, and we had some tricky rulings to say the least.

This time around I am going to look at some of the more basic rules that we see everyday in our struggle to get around the golf course. Hopefully everyone will come away with a better understanding of how to proceed in some of these day-to-day occurrences.

So dust off your rule books, get your pencils ready, and let’s test our rules knowledge.

Otherwise known as “How to Break the Rules of Golf”

Hittin’ the Links is on hiatus this week, just like the PGA Tour. Instead we are going to delve into the complicated world of rules.

At the golf course, many golfers think it is fine to play without rules. It is evident among the pages of our forum just how misunderstood or unknown the USGA Rules of Golf really are (or the R&A’s, if you’re outside the USGA’s jurisdiction). Many “What’s the ruling?” or “Did I do this correctly?” threads pop up asking for advice. As golfers we enjoy helping others play by the rules. So we here at The Sand Trap thought, well, why don’t we have a column to help people learn about and understand the rules.

Let me introduce the Sand Trap Rules Quiz Number One.

As we surmised a couple days ago, the USGA is officially proposing a change to club grooves. If you’re a “skilled” player and play in competitions, say goodbye to your irons and wedges in two years. 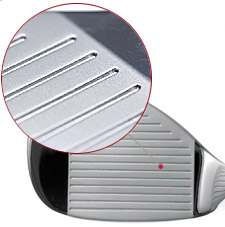 The USGA today announced it is proposing two new rules changes. The first will revise grooves, the second will relax rules on adjustability so clubs can be better fitted to players.

The proposed groove revision would require all clubs to be made to this standard after January 1, 2010. However, the USGA will recommend a “Condition of Competition” go into effect January 1, 2009 that would allow committees to require newly conforming clubs in events for “highly skilled players.”

The new adjustability rule would go into effect January 1, 2008. Right now the rule only allows changes in weight. Thus, the new rule would likely make adjusting lofts, lies, or shaft flex possible, just not during a “stipulated round.”

Controversy surrounds Annika Sorenstam’s tee shot on the 18th in the first round of the ADT Championship.

Controversy – and a 30-minute discussion on the 18th hole – surrounded Annika Sorenstam’s tee shot on the 18th hole at the end of her first round in the ADT Championship today. After hitting the ball in a bunker inside a marked lateral water hazard, Sorenstam was given a drop near the back edge of the bunker and hit the green with her third shot. Paula Creamer, Sorenstam’s playing competitor and Kay Cockerill, on-course commentator for The Golf Channel, disagreed. They contended that the ball never crossed the hazard line. If that were true, Sorenstam would most likely return to the tee to hit her third shot.

The USGA may be looking to cap the MOI in your driver. Hey, at least they’re not going after your balls!

E. Michael Johnson of Golf World has published an article which says that the USGA sent a memo yesterday to manufacturers announcing a proposal to limit the moment of inertia (MOI) in drivers. If adopted, the proposal will go into effect March 1, 2006.

Moment of Inertia has been a hot selling item lately… on putters, but its use in drivers has taken a back-seat to two other existing limitations – head size (460cc) and Coefficient of Restitution (or CoR, capped at 0.830). MOI is a measure of a clubhead’s ability to resist twisting on off-center hits. High MOI = more forgiving clubs. In March of this year, the USGA said that MOI had tripled in drivers since 1990 (yes, since the persimmon days). The March notice also mentioned three other areas would be looked at: spin generation, MOI, and the adjustability of woods and irons (see: TaylorMade r7 Quad).

Are you a scratch player who could kick butt in amateur competitions but you and your family don’t have the funds?

The USGA recently revised their rules of amateur status. Starting January 1, 2006, amateur golfers of all ages will be able to accept reimbursement for tournament expenses from sources outside of their family. Tournament expenses include transportation (airfare, rental car, extremely over-priced gasoline), hotel, meals, the entry fee, and caddie fees. This is a major change from the current section of the USGA’s Rules of Amateur Status that only allows junior golfers to accept help from outside sources for tournament expenditures.

Raking bunkers properly is a nice way of “paying it backwards,” and here’s how you do it.

Raking a bunker is one of the easiest things to do, yet many people have never taken the three minutes to learn the proper technique. Here it is, in easy-to-follow format. 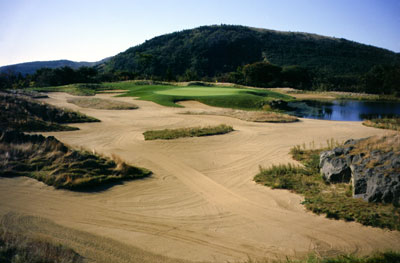 How do you figure out your golf handicap?

What’s your handicap? If the king asks, don’t answer!

History
In the early 20th century, the United States Golf Association (USGA) introduced a handicap system aimed at allowing players of all skill levels to compete against one another. In other words, and theoretically, the handicap system allows a player who has trouble breaking 90 to compete against Tiger Woods. This is done by granting the weaker player “strokes.” On tough holes, the less skilled player is allowed to take a stroke (or more) off of his score.

The USGA handicapping system was fitted in the 1980s with a new gadget: the “slope rating.” The slope rating aimed to level the playing field (pun intended) by accounting for the relative difficulty of different courses. Thus, handicapping involves three numbers: your score, the course rating, and the slope rating.