We profile our second TST member in this article by looking at eight of his GAME GOLF rounds, and we use a modified assessment technique from Lowest Score Wins.

In November 2016, we started a new feature where a volunteer steps forward and works with us to analyze a bunch of representative rounds to shed some light about their game. You can find the first article in the series here, with all the appropriate background on the goals of this series.

In this second article, we will take a close look into @SlowCelica’s game (from now on, referred to as SC). We will intentionally throw a lot of numbers at you, so if that is not your style, then there is no need to read on. There are lots of charts below, so if you want to just skim, you’ll likely get the gist. Later, we will create a thread in the discussion forum, where we can have a dialogue with SC about the analysis.

The point is to see what useful knowledge we can get from of the numbers, not to simply geek out with stats. We will also get a baseline of where SC stands now, and as we get deep into the season, we intend to check back in with SC to see how his game progressed.

With the help of GAME GOLF, we take a look at a forum member’s game and where he can save strokes.

Introduction
We are starting a new feature where a volunteer steps forward every so often and allows a statistical deep dive into their most recent rounds. All we expect in return is that they diligently work on the areas that we identify as their biggest problems.

The purpose is to show how we can use GAME GOLF (GG) and the principles in Section 2 of Lowest Score Wins (LSW), “Building Your PracticePlan,” to move our games forward. We will:

One issue we foresee is: based on past experience and knowledge, it is extremely likely that we will all be the same: fix our full swings!

Trying to sort out if the “hot hand theory” applies to golf.

“You want Webb Simpson on your fantasy team this week, he’s been playing great the last few months.”

The hot streak. Long defended by athletes, denounced by statisticians. It pops up in discussions about three-point shooting, batting titles, and blackjack, but I want to talk about golf.

I don’t really care about putting hot streaks, and it would have taken me a decade to comb though the data to chart individual rounds, but there was one thing I could check out: tournament finishes.

My hypothesis going in was, with some reservations, that there must be something to the hot-hand theory. We’ve all seen the kind of streaks Tiger and Rory have gone on where they seemingly can’t miss a putt, and we’ve all had our own streaks where nothing seems to go straight. I figured most pros would go through the same thing.

But the results told a largely different story.

A few months ago, back when Tiger was chasing down the number one ranking, I got an idea: Why not graph out the trajectories of the world’s top players over their careers, using the official data available on the Official Golf World Rankings website? At the time, the OWGR site only provided downloadable player data back until about 2003, which is fine for the careers of Rory McIlroy and Brand Snedeker, but, as you’ll see below, the Phil Mickelson graph from 2003 on is relatively boring.

Thankfully, when I looked at the data again this month, they had expanded the data all the way back to their career beginnings. Ernie Els, for instance, the oldest player I tracked, has data going back to 1989.

So this is what I decided to do: I got the points tally and OWGR ranking data for the top 15 players in the world as of July 7th (a while ago, I know, but it takes a while to compile and graph all of the data), and graphed both sets. The OWGR points and rankings are through that same day, so they do not include Phil Mickelson’s Scottish Open win or his British Open title. Tiger’s Bridgestone win is similarly unrepresented.

I decided to normalize the y-axes with a maximum of 25 points and a 500 ranking for comparison’s sake, though with some of the more consistent golfers (Tiger, Phil, Ernie for much of the mid-2000s) that is a bit to their detriment (in that you can’t see the more slight variations). The x-axes are different for each player, going back to the very beginnings of their pro careers. The OWGR data can get a bit wonky at the very beginnings of the data, which you can see pretty easily in the Tiger and Rory graphs. The y-axes cutoffs do minimize that a bit.

At the beginning I’ve also created two graphs, which superimpose data for all 15 players dating back to 2003.

If graphs aren’t your thing, well, read the captions and enjoy the colors. And if you have to use Excel all day at your job, fear not, for I used the Apple app, Numbers. 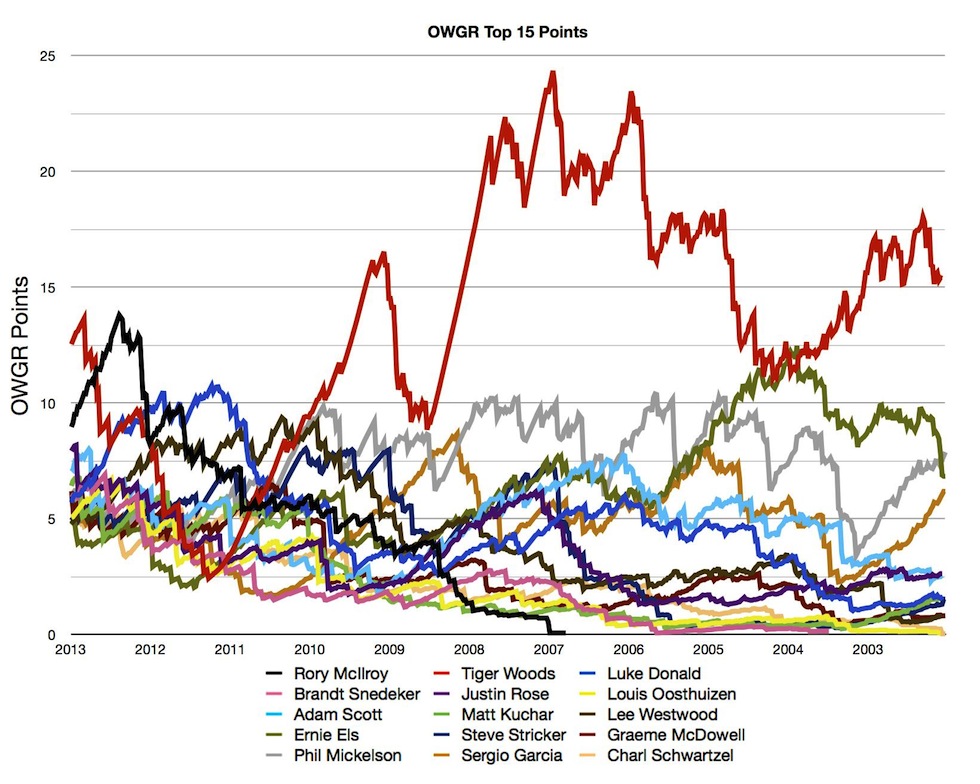 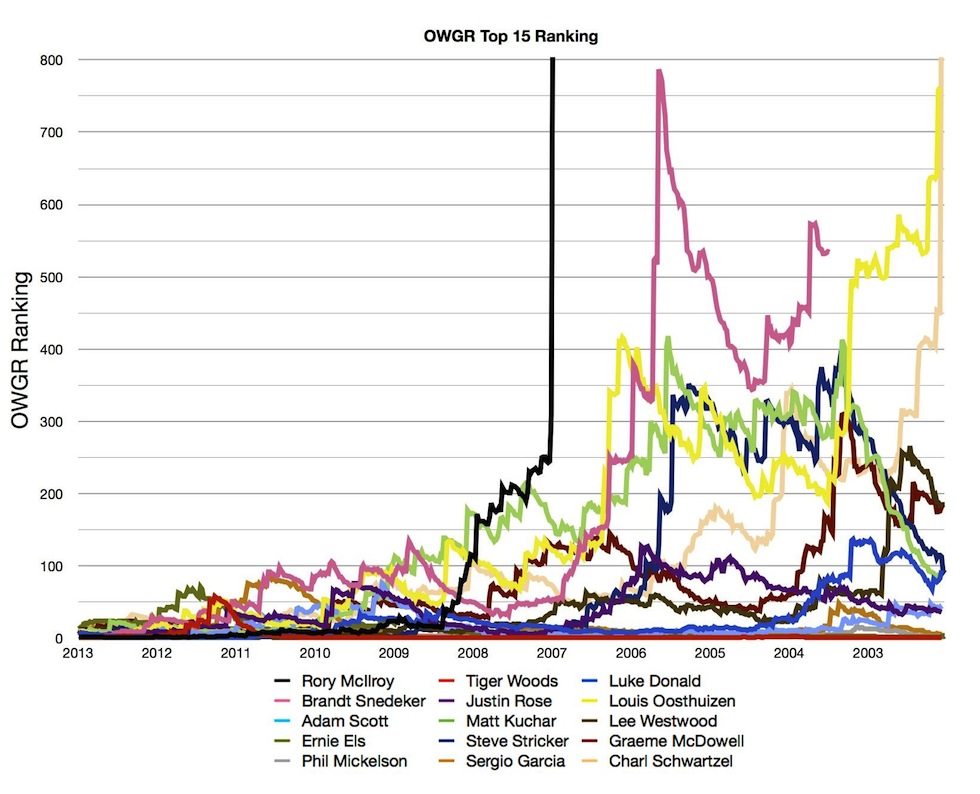 Is keeping stats just a waste of time or can it actually benefit your game?

Golf is a game where progress and ability can be measured in many different ways. There is, of course, the raw score; whether one is a scratch golfer or shoots in the 100s, for many of us, this is the only number that matters to us.

However, many golfers take that to another level. For some that means posting their scores and keeping a handicap whereby they can “level the playing field” and compete with others of differing abilities. Others keep different stats to track their abilities and improvement in different areas.

Do long/belly putters really give players an advantage?

2011 was quite an interesting year for golf; sure we didn’t see Tiger return to form (signs are pointing to that occurring this year), but there were a number of things happening that kept golf fans entertained. We were treated to three different number ones in the world in Martin Kaymer, Lee Westwood, and Luke Donald and saw four first-time major winners (Schwartzel, McIlroy, Clarke, and Bradley), which is something that we haven’t seen since 2003.

One of the biggest trends that picked up in 2011 was many players moving towards long or belly putters. It had always seemed like the long putter was for old guys or those that got the yips but the idea has become more popular as of late. Recently we have seen Adam Scott put the broomstick in the bag and the move gained even more steam with Keegan Bradley being the first to win a major with a long putter as he captured the PGA Championship in August. Three straight wins and the steady play of other long putter users such as Webb Simpson (who contended for the money title) only added to the intrigue.

Regardless of your feelings on whether or not long putters should be legal, they are here for now and more and more players, both amateurs and professionals, are putting them in their bags. The question is this: are long putters just a fad and something to be forgotten in a few years or are they the real deal? Do they actually help the players using them sink more putts or is just between the ears? We’ll look at some stats from the PGA tour to see if 1) players using the long putter putt better than those with standard length putters and 2) if players who have made the switch improved upon their own putting regardless of where they ranked before.

Continue reading “Belly Putters: The Long and Short of It”

How well do you think the leaders in par-three birdies did this year? Par-five birdies?

Let’s talk about everyone’s favorite topic: birdies, who makes them, and how much it helps your round. I remember the first time I shot under 40 for nine holes: I shot a 38 that included two birdies. Take away those and I don’t break 40 that day. Over a year before that, I birdied the 17th on my way to breaking 90 for the first time with an 87. A bogey instead would still have me breaking 90 that day, but the bird makes me sound clear and focused (the truth is that I had no idea where I stood on the 17th tee).

Most professionals aren’t concerned with looking cool, and if they’re worried about breaking 40 or 90, we probably aren’t seeing them in the winner’s circle on a regular basis. But they are concerned with birdies.

This week we take a look at birdies on the PGA Tour.

Do Scoring and Skill statistics align on the PGA Tour, or are they just one of many factors?

Well, we’re barely into the 2008 season on the PGA Tour, but the statistics collected already tell many different stories. For those of you who are at least mildly interested in statistics, if you’ve never visited the stats section of PGATour.com, you should. The dropdown menus of ad hoc reports available to anyone with a laptop and WiFi connection is fantastic! And I’m sure with some mid to high level ‘tech’ skills it would be easy to use a report writer software tool to push, pull, and twist data from existing reports to create your own.

Continue reading “Scoring vs. Skill on the PGA Tour”

When the FedExCup was announced way back in 2005, the questions began. Does golf really need a playoff system? What kind of playoffs doesn’t eliminate people? Why do 144 people qualify for the playoffs when only 125 keep their PGA Tour cards?

The question I asked myself (and which Dave Koster asked last year) was a simpler one: isn’t this just another way of rejigging the money list? The formula for handing out FedExCup points is very similar to the way in which prize money is handed out.

So why create a separate measure at all? Wouldn’t using the money list be “good enough”? PGA Tour fans have watched the money list for years. It’s a simple value that makes a lot of sense.

Let’s have a look at how things shook out. Are the money list and the FedExCup brothers from different mothers?