An extension of the original and very popular Red X line, the new models lose the insert but gain a new finish, sight line, graphics, and, with the X5, a new neck.

I always find it interesting to watch Scotty Cameron tweak his designs. I mean, how many putter makers have produced so many variations on a theme as he has done with his multiple incarnations of Newport-style heads?

It now appears he’s traveling down that same road with his Red X mallet putters. Unlike the first mallet putters he produced shortly after joining Titleist (the Caliente and Bolero models) that weren’t exactly blockbusters, the Red X putters have established a very strong following among those who favor a mallet head.

It’s easy to understand why. It’s a classic shape, beautifully milled, and available in multiple lengths and head weights… as long as you’re right handed. Here’s a look at his latest takes on what a mallet can be…

Changes and Constants
Perhaps the biggest change in these two new models is that the German stainless steel insert embedded in a polymer gasket is history. The heads are milled entirely out of a solid block of 303 stainless steel. This undoubtedly is going to mean the new models will produce a slightly different sound and feel.

The Red X3, on the left, has a hosel-less shaft while the Red X5 has the plumber’s neck. Both feature the new Charcoal Mist finish and the black anodized sole plate.

Another thing that may contribute to a different feel is a different shaft in these putters. Unlike the “stepped” shaft I see in the Red X2 that I own, the new putters are fitted with a “step-less” shaft.

The finish has changed from the “natural” matte steel to something called “Charcoal Mist”… the same finished used on this year’s Circa 62 line of putters. I’m a fan of the change. I’ve always liked a darker head not just for the glare reduction, but also because darker looks heavier and more solid to me. But, obviously, that’s just a personal perception.

I also like the change in the sight line. Instead of the three lines, we’re now down to one. It’s simpler, and to my eye, less distracting while still serving as a useful alignment aid. 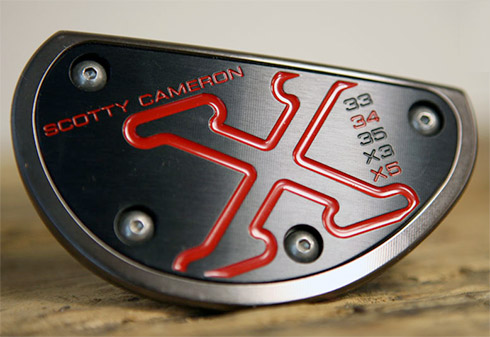 Paintfill on the sole identifies the length and model of the putter. Note the black anodization.

With the new finish comes different graphics, including a black anodized aluminum soleplate with a huge Red X logo stretched akimbo across it. Very gnarly. There’s also a new headcover design that pretty much screams you’ve got one of the latest Cameron mallets. 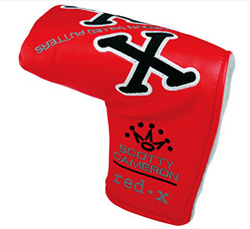 Still the same is the unique shape of the head with its raised toe. Like the raised toe on the Circa 62 #3 I use, it helps to keep you from lifting the toe up at address and thus have a tendency to pull putts left.

Also the same is the removable sole, and therein lies a bit of Cameron trivia. In a recent interview with a Korean magazine, Scotty said it was the Zebra putter introduced back in the 70s that inspired him to begin designing putters. Quite revolutionary and all the rage at the time, the Zebra also had a removable sole very much like that of the Red X putters. 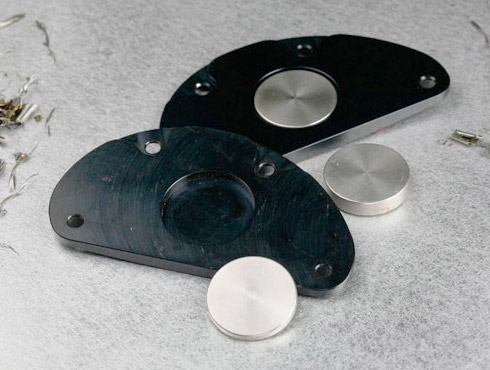 This peek under the sole of a Red X5 reveals the precision milling of both the sole and the weights.

While the Zebra allowed you to change the head weight by adding or removing steel washers bolted against a rubber gasket – a pretty crude arrangement actually – the weights in the Red X putters are all precision milled. So while you can’t change weights yourself, you can have Scotty’s Custom Shop do it for you. 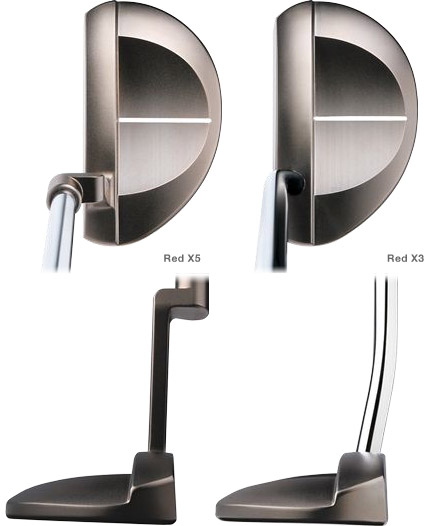 Here’s a good look at the difference in offset between the two models. The X5 has a full shaft of offset, the X3 a quarter shaft.

The Red X3
While the new Red X3 looks a lot like the original Red X with its hosel-less heel-shafted configuration, it is subtly different. While the original carried a single-bend shaft with a full shaft-width of offset, the Red X3 has only a quarter shaft of offset.

That may not sound like a big difference, but it is going to produce a noticeable change in the look at address. I also wonder if it will result in a little more toe hang… the weighting bias that helps the face open and close on an arcing stroke.

These differences are a good thing in that they mean the Red X3 with its solid head and different offset is going to give players another option as they choose a mallet putter. Choice is always good.

The Red X5
Once again in deference to the Japanese market where he is so popular and the number 4 is considered so unlucky, Scotty skips from 3 to 5 in model numbers. That said, this is the putter I can’t wait to try out. 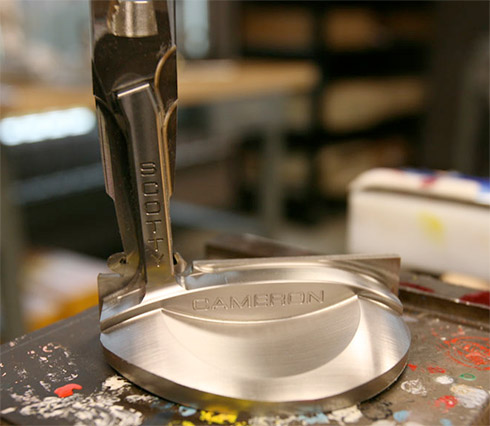 It’s pretty amazing that so complex a shape as the Red X5 with its plumber’s neck can be milled out of a single block of stainless steel.

The Red X5 features a plumber’s neck with a full shaft of offset. I love plumber’s necks. I love how they set up, the offset that screams “can’t miss,” and the cues the vertical neck gives to help you set up properly.

For myself, I’m interested to see how this somewhat more “square” neck matches up visually with all the soft curves and lines on the mallet head. The pictures look good, but I want to see one in real life.

Unfortunately, and per usual, the only left-handed version is the Red X3 at 35″.

The standard grip is the red “Baby T,” although several other Cameron grips are available with a custom order. Lie angle can also be custom ordered plus or minus 2°.

Price and Availability
Camerons do not come cheap and these are no different. Suggested retail price is $300. While Titleist says the putters will ship September 15, some bloggers are saying they’ve heard September 9. Either way, they should be showing up soon in shops and online. In fact, they’re already listed over at Edwin Watts at $299.99, although they’re not in stock as I write this.

In the End…
I think these two new models nicely complement the Red X line. We now have two different offset heel shafted, single-bend shaft models, the center-shafted Red X2, and the plumber’s neck Red X5. If you’re a mallet fan and don’t cringe at the investment required, perhaps one of these could be your next magic wand.