Titleist improves on its established and proven players irons with their recently introduced 712 Series CB and MB irons.

Last week we introduced the newest series of game improvements irons from Titleist, the 712 Series AP1 and AP2, but you didn’t think the lower handicappers would be left out, did you? With this new series also comes Titleist’s newest player’s irons, the 712 CB and MB, designed for the golfer that doesn’t need the assistance offered by larger cavity backs and prefers something both small in stature and big in workability.

Of course with the introduction of a new series of irons from Titleist comes their newest players irons, this year (as it was in 2009’s 710 Series) in the form of the MB and CB. By building on those previous models, Titleist was able to incorporate a number of small refinements that push these irons even further in terms of what the accomplished amateur as well as the touring professional desires in a traditional blade. With that in mind, let’s look a little deeper into Titleist’s latest MB and CB irons.

The new CB and MB irons stick to those qualities that have made them such an attractive option in the past – traits such as classic lines, a compact, aesthetically pleasing profile, that familiar solid sound and feel, and most of all, the shot-shaping precision found in classic forgings. That shouldn’t scare off those on the fence though, as these new forged players irons offer a modern level of playability. That comes as a result of over three decades of player research and development as well as advances in engineering and manufacturing processes. 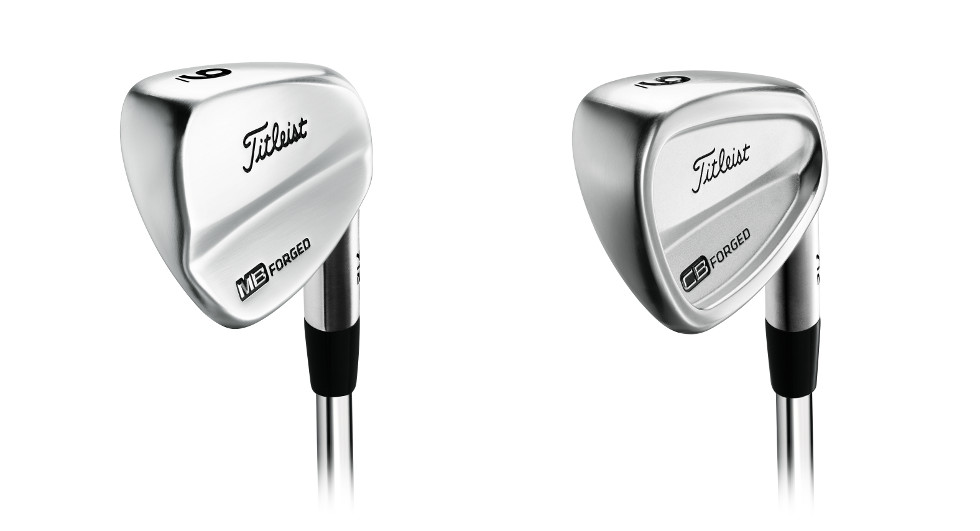 If you haven’t figured it out by now, the MB appropriately refers to the muscle back design, while CB refers to the shallow cavity back used in that model. Both sport a new back that features a faceted surface across the back that has become affectionately known as the “dog bone”. The surface area, while narrow behind the impact zone, spreads wider in the heel and toe, allowing for more mass behind the impact area. This produces that solid feel expected from the traditional blade iron. 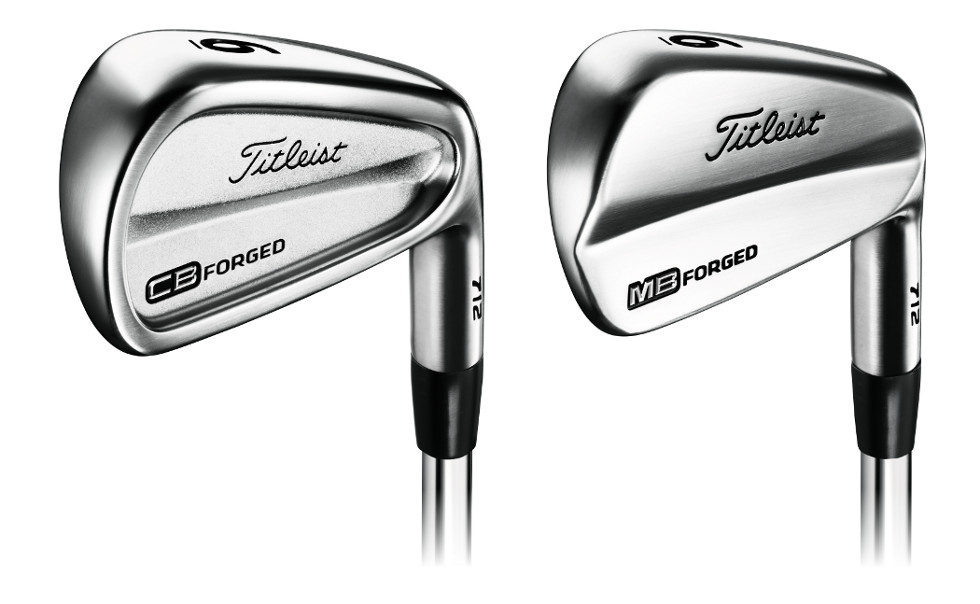 Both also make use of the popular satin finish, which reduces glare and emphasizes the toe and topline profile, which in turn makes alignment easier, further giving the player a confident feeling at address. The sole of the MB has also been refined by improving the trailing edge angle and heel relief. Together, those changes help the MB move through the turf much more effortlessly. This improved sole should make the MB a great option for players that come at the ball with a shallow angle of attack (those that pick the ball off the turf) while on the other side, the CB has a slightly wider sole that takes much more aggressive approach to turf interaction.

When we started formulating plans for the new MB and CB designs, we knew that the project would be a reinterpretation, not a complete reinvention. The original MB and CB models were so well received on Tour, as well as in the marketplace, that we knew we had succeeded in delivering the core design fundamentals that resonate with the traditional blade player. We did identify through our work with the world’s best players, however, some areas where we could make improvements, which we incorporated in the new models. The new MB and CB still embody those key design elements that made the first generation so well accepted.

712 Series CB
The Titleist 712 Series CB irons are best described as high performance, forged cavity back irons that pack a number of improvements into a familiar looking package. The forged CB head is composed of soft 1025 carbon steel and is finished off with modern satin chrome plating. It features a number of qualities the lower handicap player usually looks for, including constant blade length throughout the set, minimal constant offset, and a slim topline. The combination of that narrow topline, along with a rounder profile result in a classic but improved modern appearance. 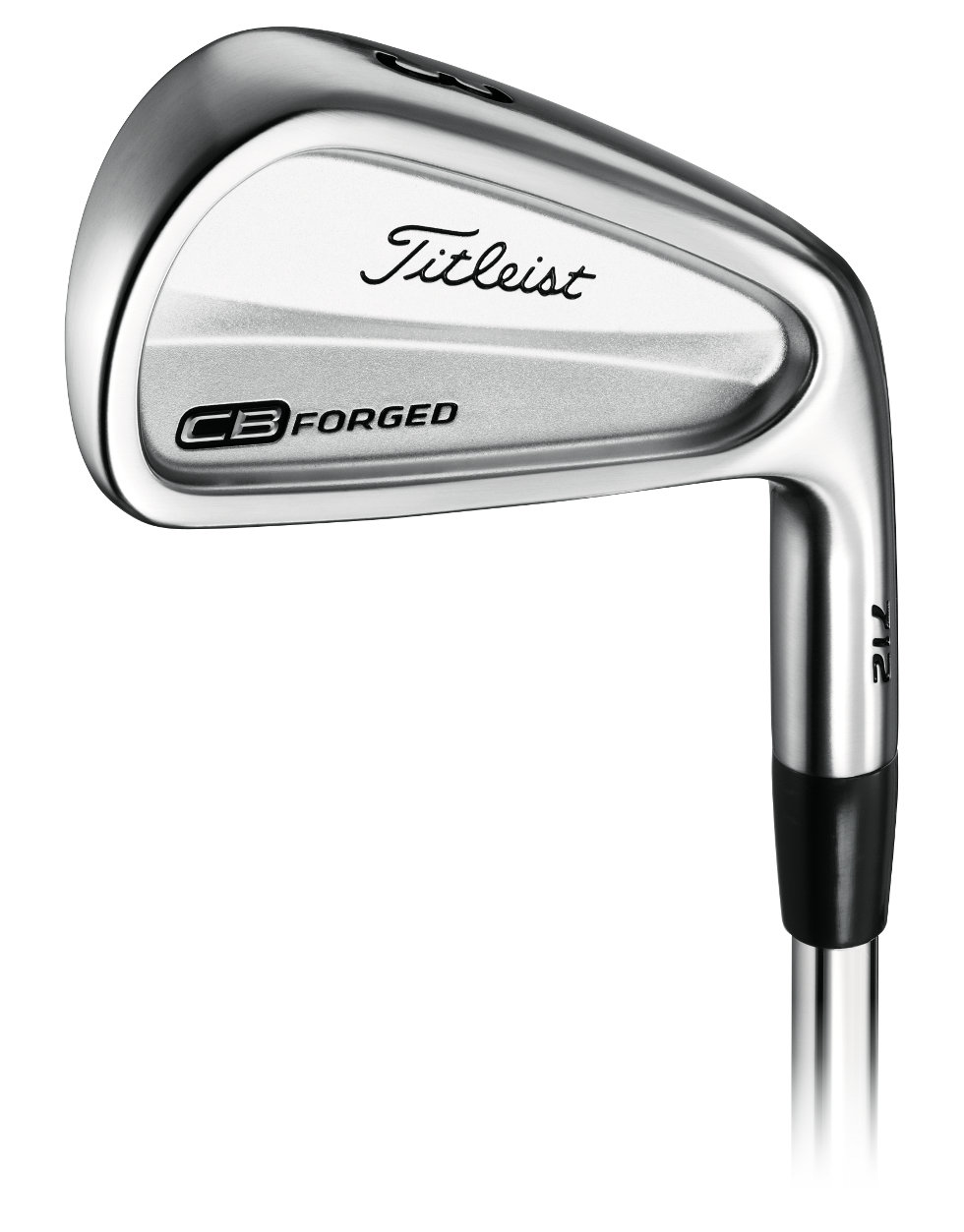 Thanks to the traditional, standard lofts, the CB produces a “player preferred” trajectory and a greater degree of shot control and workability. The slightly wider-than-before, cambered sole allows for smooth turf entry and release. 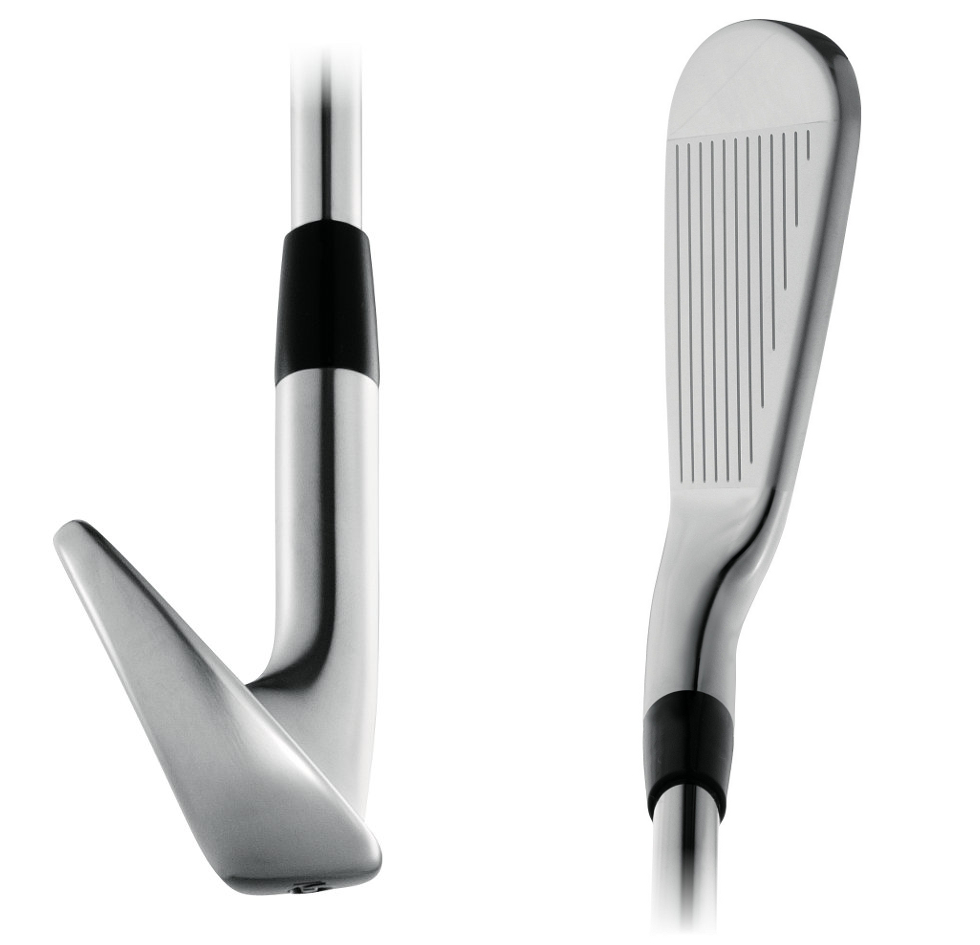 The familiar True Temper Dynamic Gold steel shaft comes standard on the CB due to its preferred feel, weight feedback, and shot control. Topping it off is the new Titleist Tour Velvet rubber grip made by Golf Pride. Of course when making a jump into irons such as these, it would be a good idea to make sure they fit correctly, and thanks to Titleist Custom, they can be ordered to your specs. The Titleist 712 CB will be available in both right and left hand models and have a MSRP of $140 per club (steel shafts) and $165 per club for the graphite-shafted option when they hit stores on November 18th.

712 Series MB
Described by Titleist as “high performance muscle back forged irons”, the 712 Series MB shares quite a bit with its slightly more forgiving sibling, the CB. For starters, it’s forged of the same soft 1025 carbon steel and is covered with a modern satin chrome plating. Again, it maintains a constant blade length throughout the set and keeps offset at a minimum (though the MB does have a progressive offset as opposed to the CB which maintains constant offset). As one can expect, the appearance at address is pleasing thanks to the slim topline. 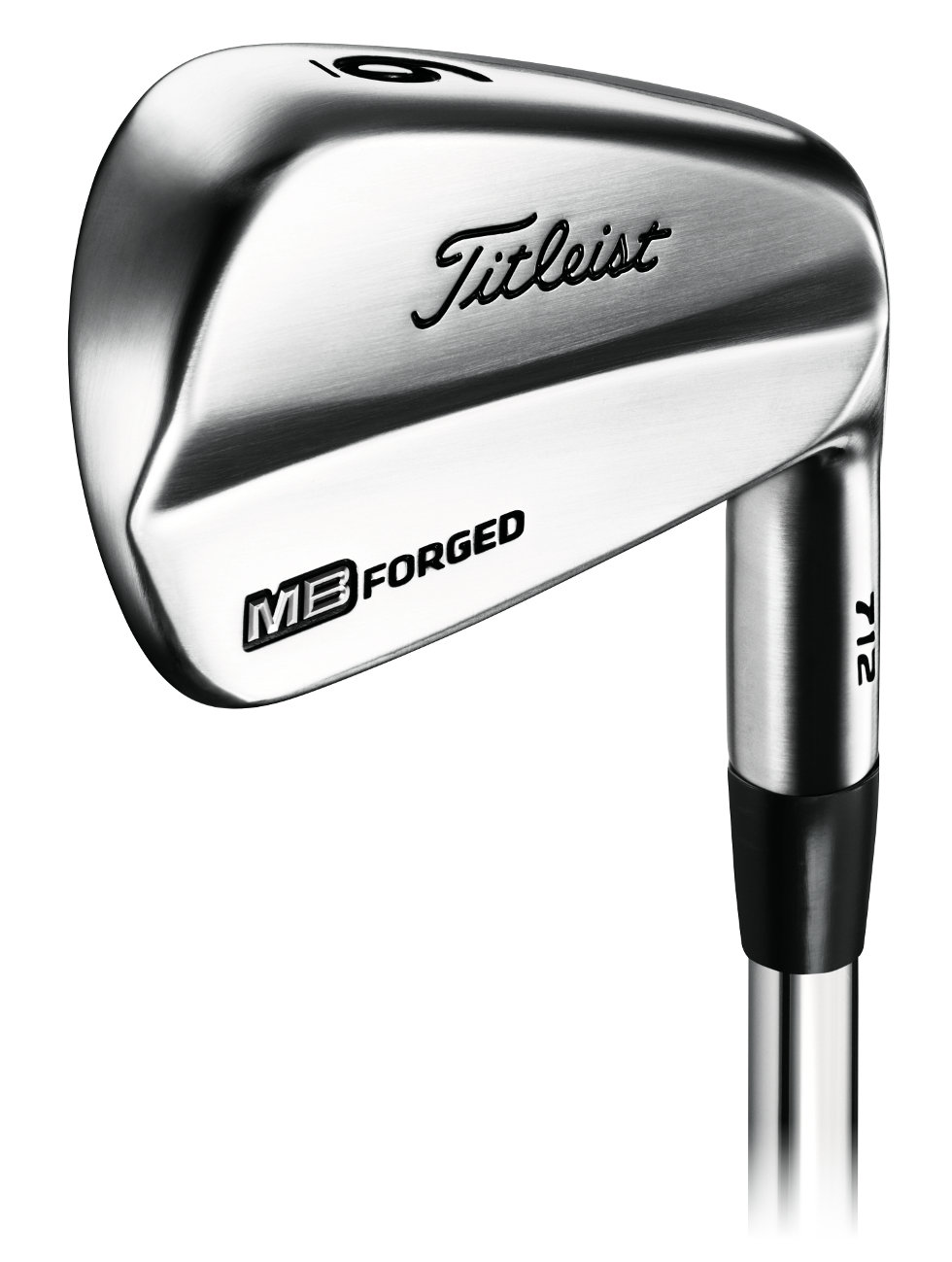 In order to enhance the feel, the muscleback design has been updated so that more mass is moved behind the impact area. The sole has undergone a significant enhancement as well, with a new narrow, cambered sole with optimized bounce angles. The back side of the sole has its own improvements as well with enhanced relief on the heel side and trailing edge, further reducing turf resistance. 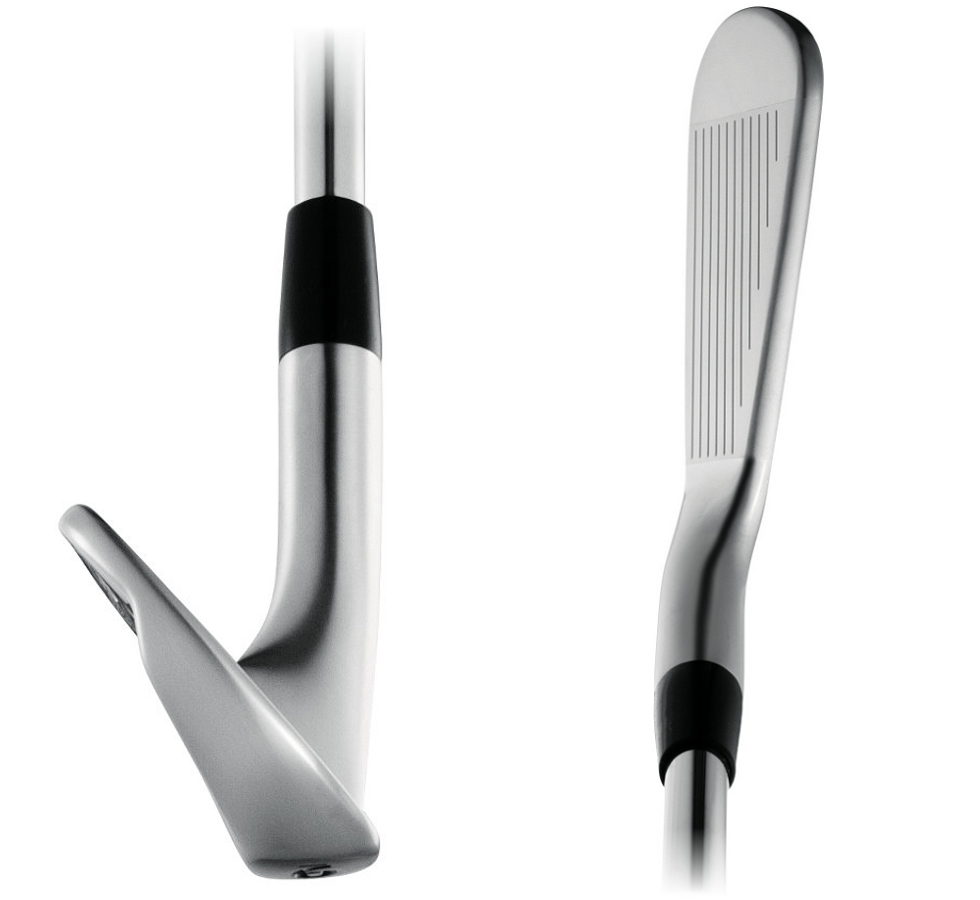 Like the CB, the MB head is packaged with the venerable True Temper Dynamic Gold steel shaft and topped off with the Titleist Tour Velvet Rubber grip by Golf Pride. If another shaft or grip is preferred, or if length or lie angle adjustments are required, a quick call to Titleist Custom is all that’s needed. The Titleist 712 Series MB irons will be available to both left and right handed players starting November 18th with a suggested retail price of $140 per club (with steel shafts) and $165 per club (with graphite shafts).