Callaway brings versatility and a new level of adjustability to a fairway wood in a classic-looking package. 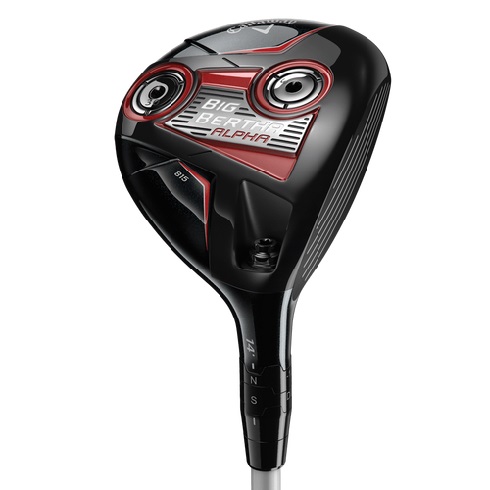 Fairway woods are some of my favorite clubs. I use my 3W off the tee for those times when I’m struggling off with the driver or just need a little more accuracy on a tighter hole. I used to have a 5W that I was able to hit a very reliable draw with, whether off the tee or on the ground. I had to stop playing the 5-wood when I discovered a hairline fracture in the shaft, but I still use my 3W at least four or five times in a round.

Because I depend on my 3W so much, picking the right replacement is very important to me. It needs to be easy to hit off the tee as well as off the deck, and it needs to be just as long as it should be. I don’t need my 3W to go as far as my driver and I certainly don’t need it if it’s only good off the tee.

This is why I’m a big fan of Callaway’s Big Bertha Alpha 815 Fairway. Its versatile design allows it to do everything I need out of a fairway wood, without being a one-trick pony. As one of the most adjustable fairway woods on the market, there are a large number of things you can do to optimize the flight characteristics of your ball and customize the club to your swing.

Earlier this year, I reviewed the Big Bertha Alpha 815 Driver and thought it was an excellent club. Its little brother is just as good. Read on to find out more.

Technology and Design
Staying in the spirit of the line, the Big Bertha Alpha 815 Fairway is highly adjustable. There are two weight ports on the sole of the club with different weights, one 3g and one 30g. The placement of the weights allows you to optimize your ball flight. Putting the heavier weight into the front port (closest to the face) causes the club to launch the ball lower with lower spin. Switch the weights around and the club will launch higher with more spin and forgiveness. 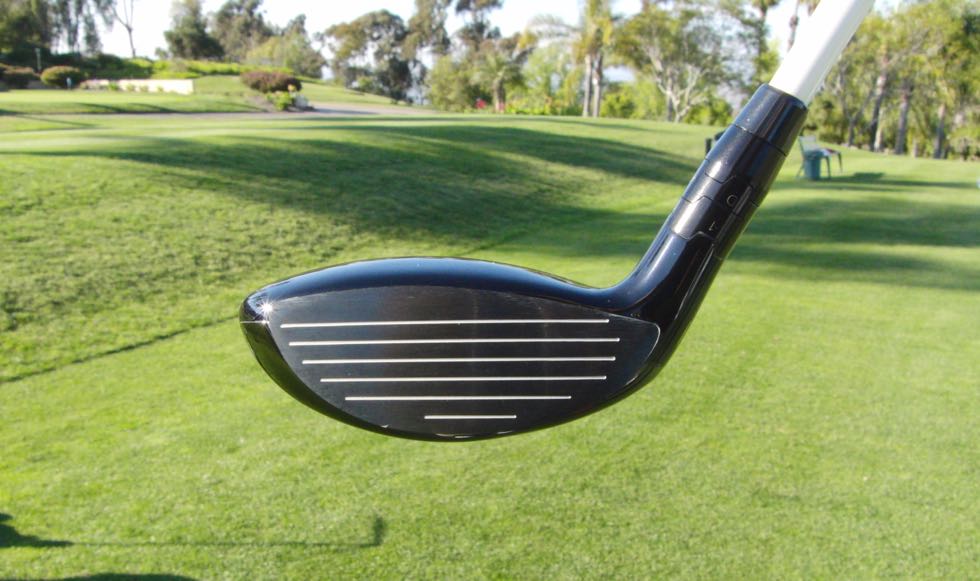 The Big Bertha Alpha 815 Fairway also features Callaway’s OptiFit adjustable hosel. For those unfamiliar with it, there are four possible loft settings from -1° to +2° in 1° increments and two lie angle settings, Neutral and Draw bias, for a total of eight possible combinations.

Another design feature on the Big Bertha Alpha 815 Fairway is Callaway’s Hyper Speed Face Cup technology. This allowed the engineers to thin out the face and redistribute the weight along the perimeter, increasing forgiveness and ball speed on off-center hits. With this club, Callaway has specifically targeted mis-hits low on the face with this technology.

Esthetics
The Big Bertha Alpha 815 Fairway is a very good looking golf club. It has a compact head with a traditional pear shape. The finish is a glossy black and there is no alignment aid on the top. It sets up pretty neutral at address. This fairway wood has that classic look that a lot of better golfers seem to prefer. 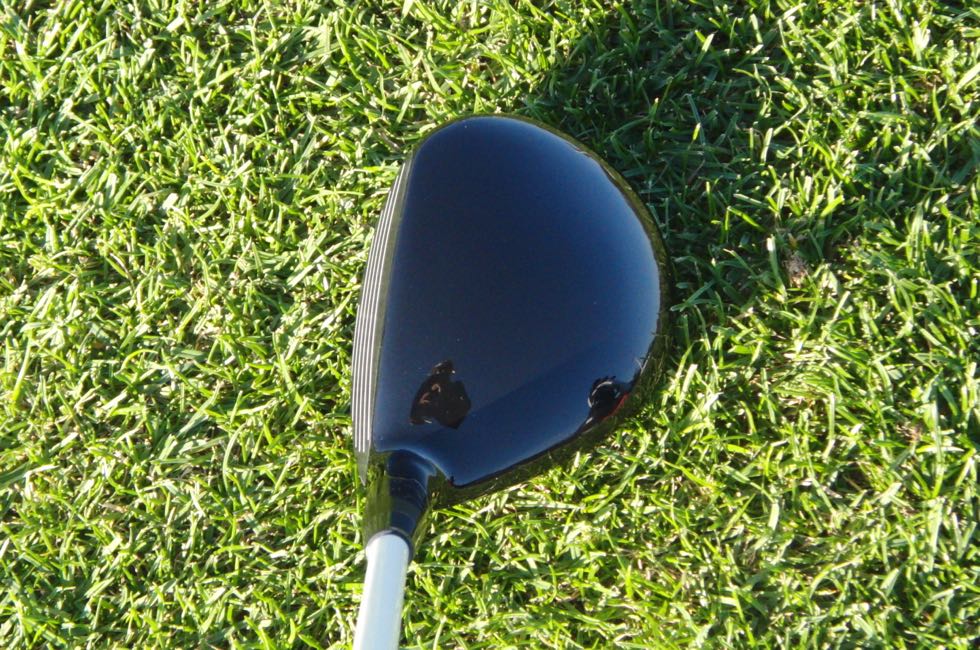 Like its big brother, the Big Bertha Alpha 815 Fairway has a lot going on in the sole. The two share a lot of common design elements. The Callaway logo and chevron are towards the top (the toe of the club) of the sole, Big Bertha Alpha is prominently displayed in the center, and 815 in small print towards the bottom (heel). The main background color is the same glossy black found on the crown, though a large part of it is a different tone because it is a different material. The rest of the club is accented in metallic red and silver with Big Bertha in white. The whole design has a futuristic feel to it. I find it stylish without being gaudy.

The two weight ports are visible on the sole. One is found right at the rear of the club and the other is about half an inch away from the face. Both weight ports are set slightly towards the toe side of center, with the front port (closes to the face) farther towards the toe than the rear port. Callaway incorporated these into the look of the club as well. They flow well with the design of the club and don’t feel as if they’re just there as an afterthought or simply because they have to be.

The club that I reviewed came with an Aldila Rogue 70 shaft, which is white with black and silver/gray accents. Again, Callaway did a nice job of matching that with a red and grey Golf Pride New Decade Multicompound grip. Everything matches well with the color scheme of the club. I know the shaft and grip are customizable options and people may end up with a completely different combination, but I thought it was pretty sharp looking as one of the stock options for the club so I figured I’d mention it. 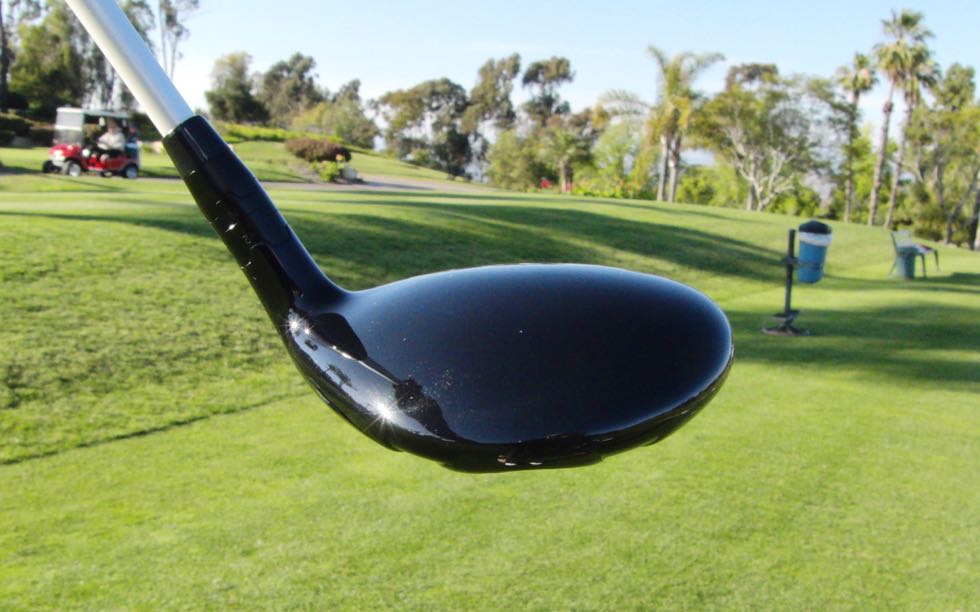 I’m still not a fan of the headcover design. It looks less like a boxing glove on the fairway wood because it’s smaller, but it just doesn’t do anything for me. That’s really it for the list of esthetic things I dislike about this club.

Club Specifications
The Big Bertha Alpha 815 Fairway comes in 14° (3W), 16° (4W), and 18° (5W) models, though the 18° 5W is right hand only. As I mentioned earlier, they all feature Callaway’s OptiFit hosel which allows the loft and lie angles to be adjusted further. Stock length is 43″ for the 3W and 0.25″ shorter for each subsequent wood.

The club comes with premium aftermarket shafts. You can choose the Fujikura Motore Speeder 665 Fairway or the Aldila Rogue 70. Callaway also offers a number of other premium shafts at no additional charge. MSRP is $299.

Performance
For this review, I received the Big Bertha Alpha 815 Fairway in the 16° 4W with the Aldila Rogue 70 shaft in stiff flex. 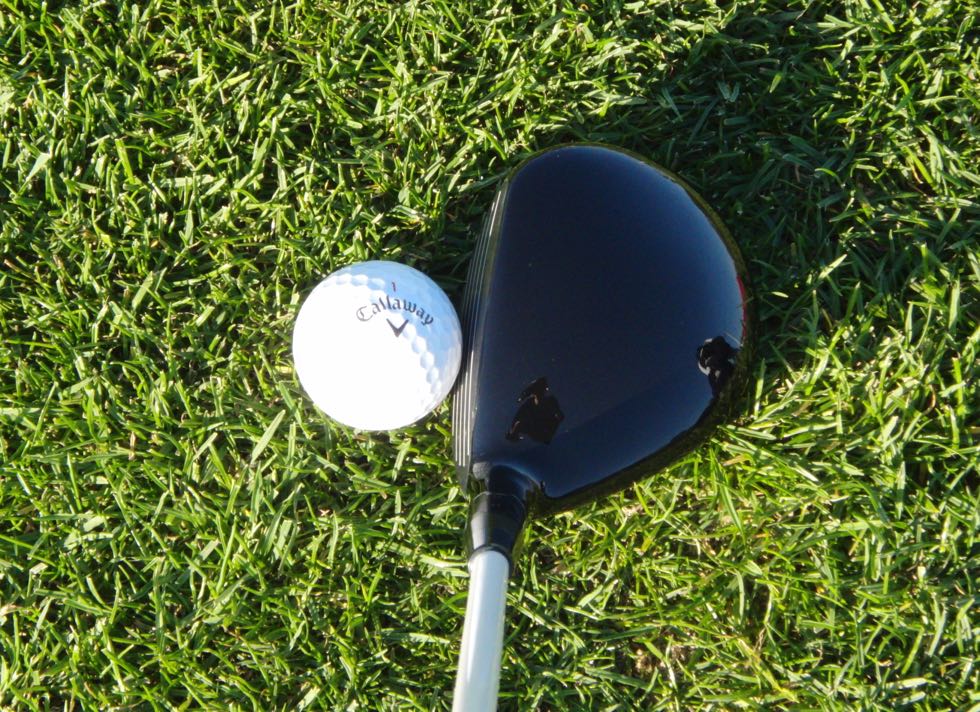 I’m not going to lie to you; I hit this club poorly the first time I got it. Usually for reviews, I’ll head out to the range and spend a good amount of time with a new club, trying different settings, different types of shots, etc. I didn’t with this one. I had the opportunity to go out and play 9 holes rather than spend time on the range and it didn’t turn out to be a good decision at all.

I had left it in the original setting I received it in: loft and lie both neutral and the 30g weight in the back of the club, promoting a higher launch and more spin. Two of the things I learned that day was that I didn’t need the higher launch to get the ball up in the air and the additional spin actually caused me to lose distance. The other thing I learned on the course that I would have learned on the range is that this club played with a bit of a fade bias for me. Since my usual miss is towards the toe, I usually aim a bit to the right of my target to give myself room to miss left. I kept pushing the ball to the right during that round with some disastrous consequences.

I did spend time with it on the range sometime later and confirmed that my draw is less pronounced with this club. Good shots were basically dead straight. I also swapped the weights into the low spin configuration with the 30g weight in the front of the club. This is where the club really shined for me. The lower spin setting allowed me to hit the ball with a more penetrating flight, and with my swing speed and the 16° head, I was still able to launch the ball in the air fairly easily. Once I was able to adjust the club for my swing, I was able to play this club with confidence. I hit it just as far as my old 3-wood with the reliability that I’ve been missing from my 5-wood. 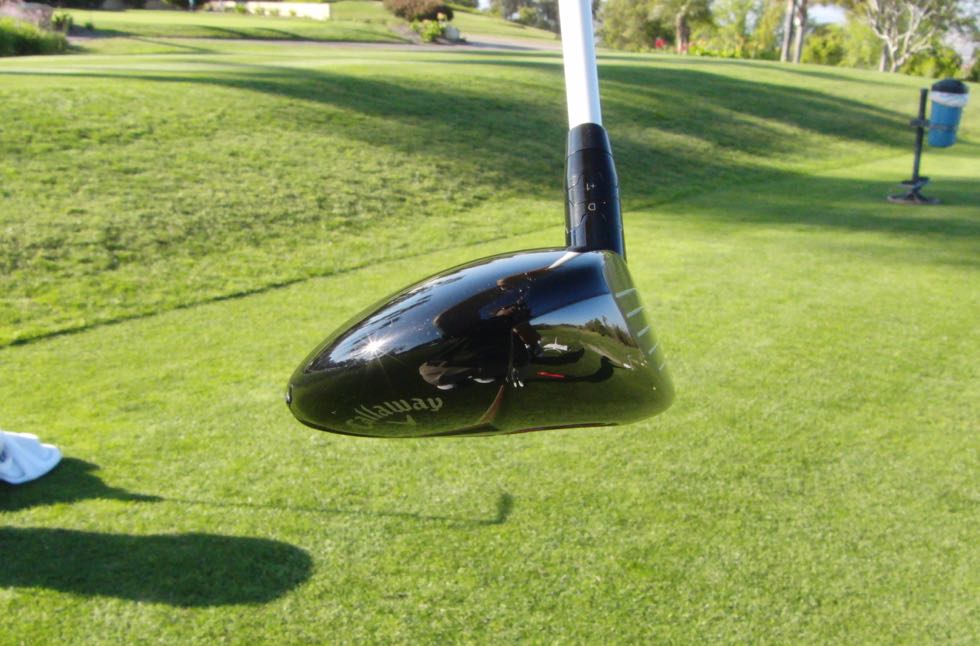 I know feel is a rather subjective thing, but I liked how the club performed in this aspect. The Aldila Rogue 70 felt a little stiffer than I was used to in a fairway wood, but I had no problems loading it in the downswing. Impact felt solid like there was some weight behind the strike instead of a hollow or springy feel. I found the sound at impact pleasing, too. It wasn’t hollow-sounding or tinny, but more of a solid thwack.

I don’t want to make the Big Bertha Alpha 815 Fairway sound like a miracle club though. You still need to put a good swing on it, as it’s not the most forgiving fairway wood on the market in the low spin setting. I don’t believe that setting will be of much help for anyone who doesn’t swing the club fast enough or has trouble launching their fairway woods in the air.

I did put it through its paces and I can tell you for certain that you don’t really want to hit this club out of questionable lies. Anything you generally shouldn’t try to hit a fairway wood out of (deep rough or divots, for example), you shouldn’t try and hit this club out of, either. It does perform well off the fairway, out of light rough, or sitting high in deeper rough. The Hyper Speed Face Cup also seems to perform as advertised, providing additional ball speed off of shots hit low on the face. My tendency is to miss my fairway wood low off the deck and I did get a little bit more jump out of thinned shots. 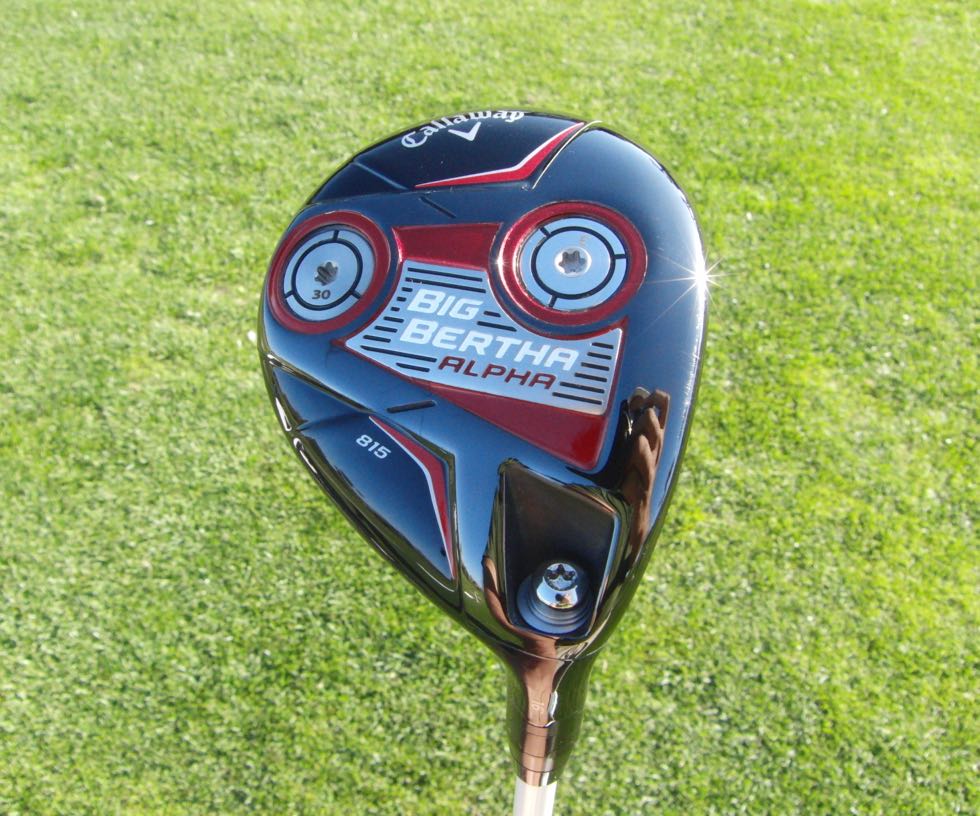 Conclusion
I really like the Big Bertha Alpha 815 Fairway. It looks and feels great while performing well, too. It’s a versatile club that can be used off the tee or off the ground. You’re able to adjust it in ways not typically found in fairway woods, allowing you to optimize settings to your swing.

All of this technology and performance comes at a premium, though. At $299, the Big Bertha Alpha Fairway is easily one of the most expensive fairway woods on the market. A lot of people are looking to purchase drivers at this price point. It does give you a lot for your money, though, so if you can afford it I think it’s a good buy.

If you’re someone like me who really loves their fairway woods and relies heavily on them, I’d definitely recommend this club.