Callaway brings maximum adjustability in a driver that is both low-spinning and forgiving. 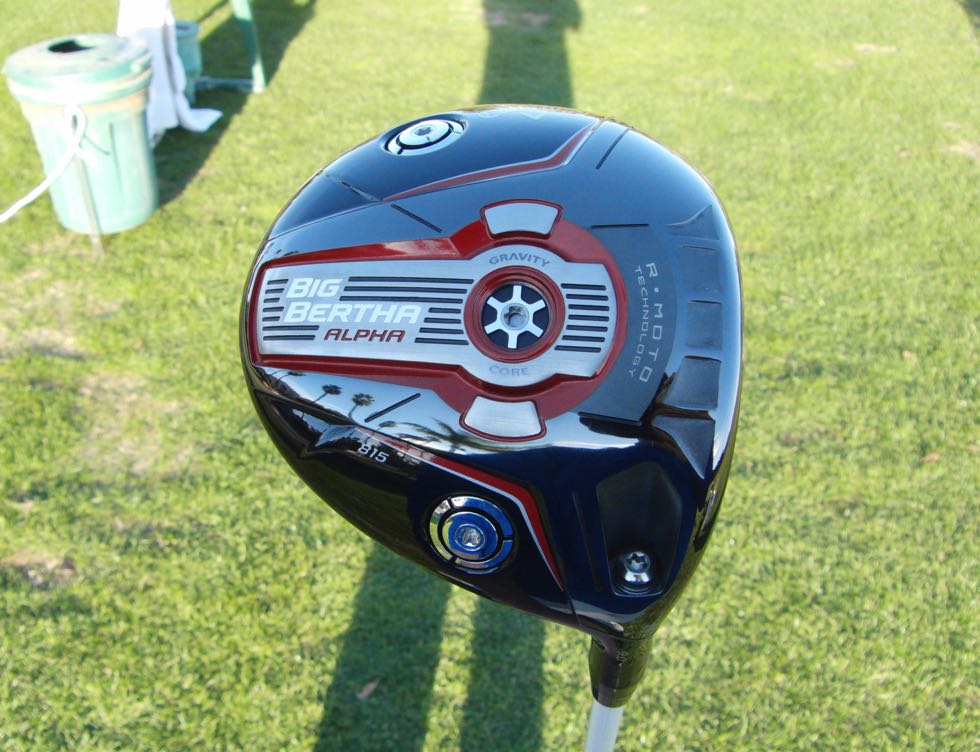 In early 2014, Callaway released the Big Bertha Alpha driver. With it, they introduced the ability to adjust a driver’s center of gravity up or down through their patented Gravity Core. While this was an innovation in driver adjustability, the club itself didn’t really find its way into the hands of the masses.

Is it the real deal, or just marketing hype? Read on, to find out.

Technology and Design
The Gravity Core is back. It’s a moveable weight that inserts into the center of the clubhead that allows you to change the location of the club’s center of gravity vertically. With the heavy end of the weight down (towards the sole), the CoG is lower in the clubhead, which reduces spin. When the heavy end of the weight is up (towards the crown), the opposite effect occurs. This allows for spin characteristics of the club to be adjusted independently of the loft.

This gives clubfitters more options to optimize launch conditions. Some people, for example, need to increase loft to increase their launch angle, but they generate too much backspin and end up hitting the ball too high, causing a loss of distance. By changing the Gravity Core down, they will be able to increase the loft of the club and reduce the spin. Another golfer might need more spin, but their launch angle is fine. By turning the Gravity Core up, they can achieve this without manipulating the loft. Thus, the same club can help different golfers with different needs. 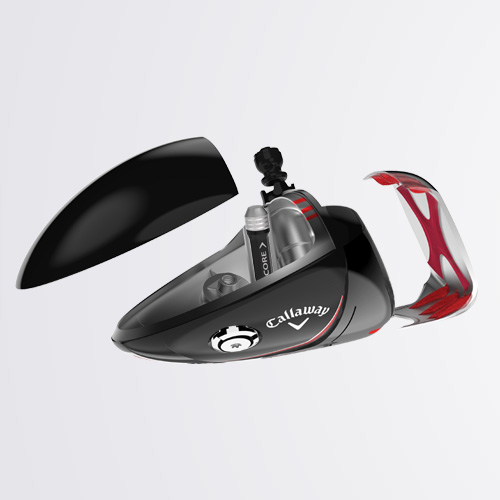 Along with the Gravity Core, the Big Bertha Alpha 815 has two adjustable weights on the sole of the club, located towards the heel and toe. One is 7g and the other is 1g. Switching these two weights around allows for adjustment of the CoG slightly for a fade or draw bias. The default position has the 7g weight in the heel, but if you tend to miss your drives towards the toe, the weights can be switched around so that your toe shots are closer to the sweetspot.

Something new on the Big Bertha Alpha 815 that was not its predecessor is the R-Moto Face Technology. Callaway describes this as basically a series of ribs that connects the top of the clubface to the crown and the bottom of the clubface to the sole. This allows the face to be made lighter while creating more stability in the outer boundaries of the face, increasing ball speeds on off-center hits.

The Big Bertha Alpha 815 is also composed of a number of different materials, including Callaway’s forged composite crown, in key locations throughout the clubhead. Combined with the additional weight that was “saved” from the face and distributed elsewhere on the clubhead, Callaway’s engineers are able to increase the moment of inertia of the club. This technology is part of what makes the Big Bertha Alpha 815 so forgiving. 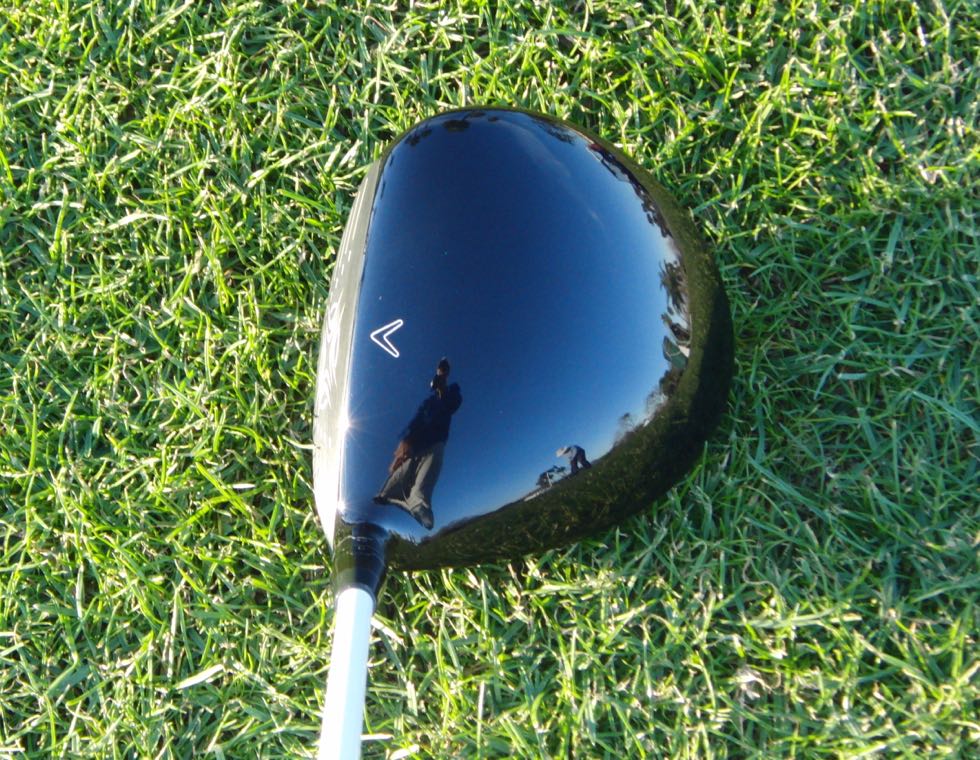 The Big Bertha Alpha 815 also features Callaway’s OptiFit adjustable hosel. There are four possible loft settings, from -1° to +2°, in 1° increments. There are also two lie angle settings, Neutral and Draw bias, for a total of eight possible combinations. Adjusting the hosel is as simple as removing the screw holding the clubhead to the shaft, twisting the hosel cogs to the desired setting, and putting the club back together.

Esthetics
For all its bells and whistles, the Big Bertha Alpha 815 is a fairly traditional-looking club. It has a pear-shaped head that’s a little bit wide from the clubface to the back of the club. The top of the club has a glossy black finish with a small silver Callaway chevron as an alignment aid. It lines up neutral at address.

The sole of the club is a little busier. Right about in the center is the plug for the gravity core. Just to the side of it, towards the clubface, is the visible part of the R-Moto technology. Both of these features are labeled. The adjustable weight ports are located on the heel and toe side of the gravity core, towards the back slightly. The rest of the design on the sole is stylistic and branding, with Callaway’s logo on the toe of the club, “Big Bertha Alpha” displayed prominently in the back center part of the club, and 815 towards the heel. The overall design has a futuristic/industrial vibe to it. 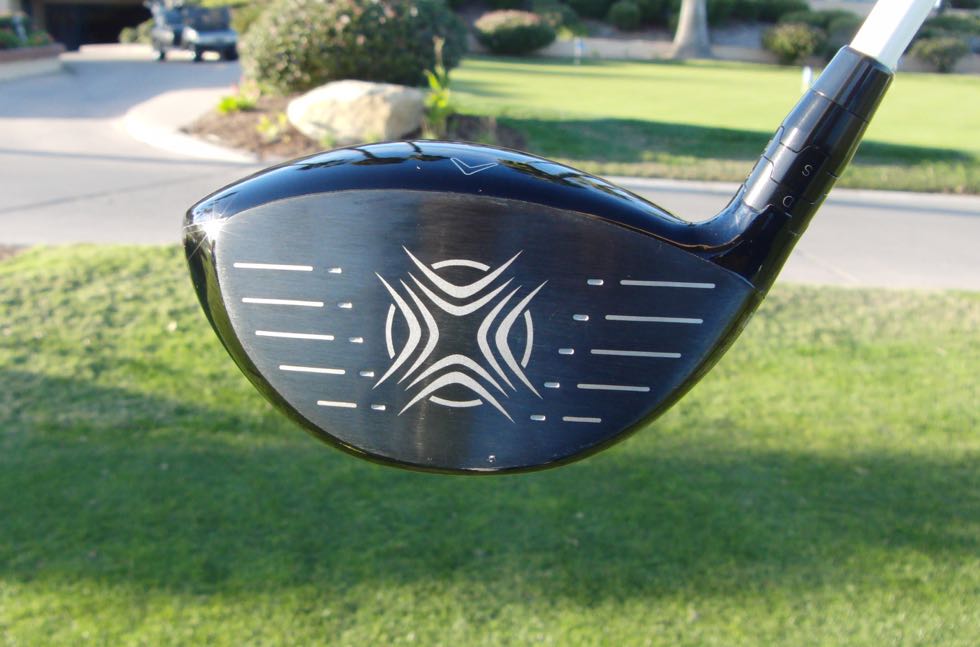 The club that I reviewed came with a Fujikura Speeder 565 shaft, which is white with silver and red lettering. Callaway did a nice job of matching that with a red and grey (scarlet/platinum, officially) Golf Pride New Decade Multicompound grip. Everything matches well with the color scheme.

I like the overall look of the club. It’s not flashy or gaudy, and there’s nothing on it that looks gimmicky. If I was forced to find something I dislike about the looks, it would have to be the “X” marking on the center of the clubface which Callaway has been putting on its drivers in some form for a while. You can’t see much of it at address, so if you don’t like it, no big deal. I’m also not a fan of the headcover. I think it looks like a boxing glove. Neither of these are deal breakers for me.

Club Specifications
The Big Bertha Alpha 815 comes in 9°, 10.5°, and 12° models. As mentioned earlier, they all feature Callaway’s OptiFit hosel which allows the loft and lie angles to be adjusted further. The driver features a 460cc head and stock length is 45.5”. 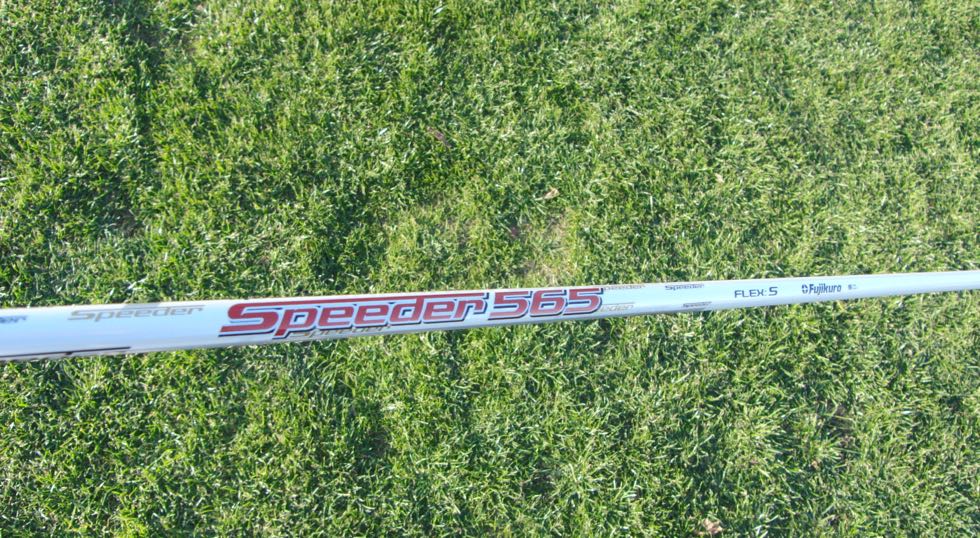 Performance
I’ve been struggling with my driver for most of the past season. Too much backspin was one of my bigger problems driving the ball this year. Even on good hits, the ball would balloon up and drop with very little roll. Callaway claims the Big Bertha Alpha 815 is the perfect combination of low spin and forgiveness, with adjustability that can fit anyone’s swing. I really wanted to see how legitimate this claim was, so I took it out to a simulator as soon as I could.

I left it in the original setting, 9° and neutral lie. In a side-by-side comparison with my current 10.5° Adams Speedline 9064LS, the Big Bertha Alpha 815 was longer. Despite being lower lofted, it launched at about the same angle, but with an average of 600rpm less spin, which resulted in more distance. On individual shots, I could still mis-hit it to over 3,600rpm, but the overall average seemed to be in its favor.

Based on the simulator, I couldn’t decide if it was more forgiving than my old driver. I was able to hit both clubs to roughly the same sized distribution circle, which actually says a lot about how forgiving the Big Bertha Alpha 815 is, considering that it is a low-spinning driver. It’s not the most forgiving driver in the market, but it certainly is one of the most forgiving low-spin drivers I’ve hit. 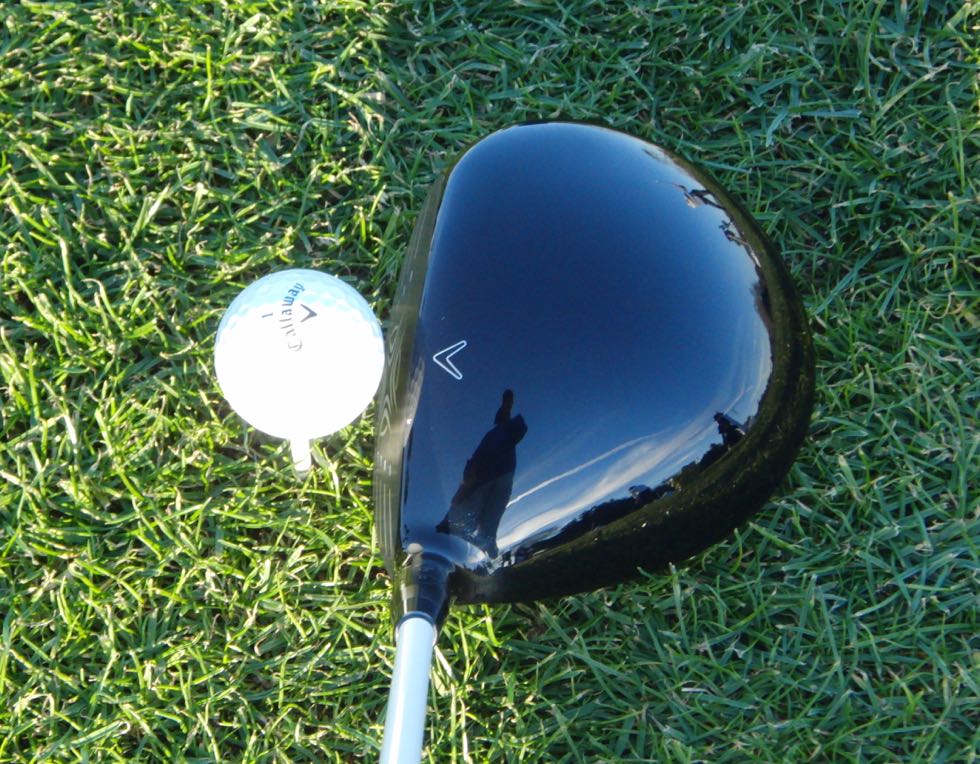 I was actually pretty happy with the results, but I wanted to play around with the adjustability, so I tried it in a bunch of different settings. I found that the OptiFit hosel was very easy to change. I was a little confused at first when I was looking for the settings on the two cogs, but once I realized that the loft and lie settings are on both of them (as opposed to one cog being solely responsible for loft and the other for lie, like I assumed), it gave me no trouble at all. The Gravity Core is also easy to remove by removing the plug, flipping it around, dropping it back in, and replacing the plug. I did not change the movable weights. My miss is typically towards the heel, so I left them in their original positions.

What I also learned from making all the adjustments is that this is a really customizable club. I can see how it can help different people’s needs. I mentioned that I needed less spin on my drives, but I could certainly benefit from more forgiveness as well, so I tested the Big Bertha Alpha 815 with the Gravity Core in the up position. I gained an average of 400rpm from that adjustment while maintaining a similar launch angle, as advertised. This made the club more forgiving and increased my ball speeds, but the increase in spin actually hurt my distance numbers. I actually ended up with the club at the +2° setting (making the club 11°) with the Gravity Core in the low spin position (down). This gave me the most consistent numbers. 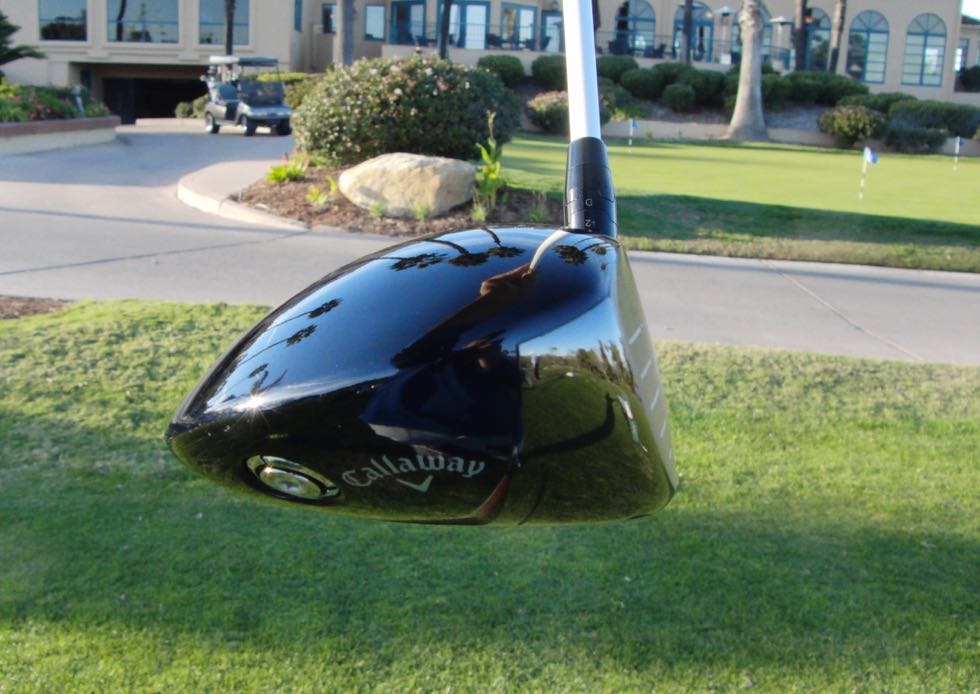 I liked the way the Big Bertha Alpha 815 feels, too. Even though the Callaway and my Adams are both listed as D3, the Big Bertha Alpha 815 head just feels a bit heavier. That’s a good thing for me because it gives me better feedback throughout the swing. I tend to take the clubhead too far inside on the takeaway and the heavier head feels a little more awkward in that position.

The sound of the club at impact took a little getting used to. My old driver has a loud, high-pitched pop sound when it strikes the ball. The Big Bertha Alpha 815 has a more muted sound to it, sort of like the sound I get out of my 3 wood. I’d say it sounds more like a solid club hitting a ball, whereas the Adams sounds like a hollow club hitting a ball. I never really noticed how jarring the sound was at impact until I compared the two side-by-side. I like the sound the Big Bertha Alpha 815 makes much better.

On the range, I was able to see exactly what the difference the Big Bertha Alpha 815 was. Like the simulator results, the ball launched at similar trajectories with both clubs, but the Big Bertha Alpha 815 had more of a boring, penetrating flight. The ball was lower at it’s peak, which is a good thing for me, and it descended on a flatter angle, meaning the potential for more roll is there. 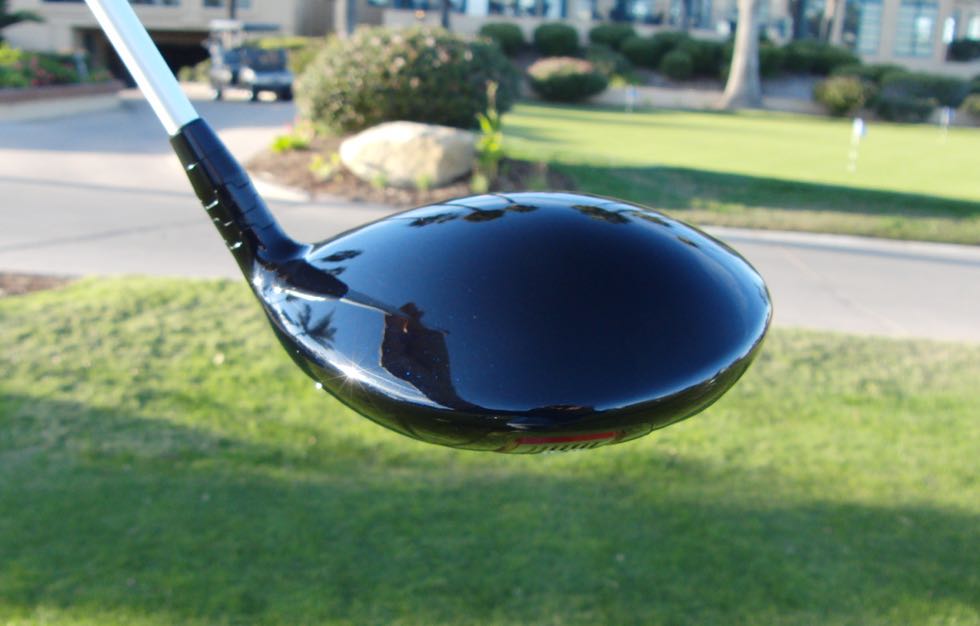 Contrary to the findings on the simulator, I did find the Big Bertha Alpha 815 on the range to be more forgiving. Because of the prior results, I was surprised to see pretty decent shots on slight mis-hits. I lost less yardage compared to my old driver on similar shots and hit fewer wild off-line shots (OB drives). I did have a couple of shots that didn’t spin enough to keep it airborne for very long and came up well short of what I expected them to. I think the other positives out-weighed those shots, though.

I like the Big Bertha Alpha 815. It looks, sounds, and feels good. It delivers on Callaway’s promise of being low-spin and forgiving. It’s not going to be the industry leader in either category, but it balances the two well.

The club is $449, so it’s not cheap, but you are getting a premium shaft and a clubhead that’s highly customizable and loaded with technology. It is one of the few clubs in the market that allows you to adjust spin independent of loft. You’re getting your money’s worth.

I do believe what Callaway claims, that this club could be a good fit for most people. If you’re in the market for a new driver, I think you should give the Big Bertha Alpha 815 a try.