“Deep Freakin’ Bunkers Country Club” may be a better name for this course, but Little Mountain will suffice for now.

I looked high and low, but never really saw any large mountains at Little Mountain Country Club (LMCC), so they must be little. Or perhaps I was simply distracted by the gaping bunkers sprinkled liberally about the course.

LMCC is a five-star layout (as determined by Golf Digest), which places it in some heady company: Bethpage Black, Spyglass Hill, Pinehurst #2, Bandon Dunes, Pebble Beach, Arcadia Bluffs, and Whistling Straits are among the others to receive a perfect rating.

I live less than 90 minutes from Little Mountain, so I’ve stopped by a few times. Is the course worthy of five stars? Read on to find out…

Conditions
I first played Little Mountain in March, 2006. Open year-round, weather-permitting, LMCC suffers from its proximity to Lake Erie and spends a good portion of the winter under at least a small amount of snow. Yet even in mid-March, with the temperature in the mid-50s, the course was already quite playable. Winter can wreak havoc on turf, with snow mold and all manner of other diseases and excess water, but Little Mountain was relatively disease-free and quite dry. 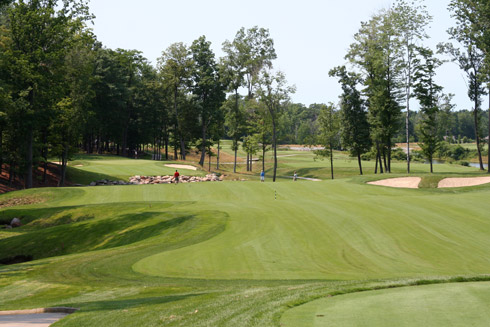 The 366-yard third requires only a hybrid or 3W from the tee before playing to one of the smaller and more contoured greens on the course.

By mid-April, the course was starting to really come into form. The grass at LMCC, only recently opened (in 2001), was clearly given sufficient grow-in time, as a good root structure exists on fairways and greens.

The course features receptive greens, lush fairways, and plentiful healthy rough. The greens were playing to about nine feet on the Stimpmeter in mid-March, and played to a good daily rate of 10 to 11 by mid-April, where they’re held throughout the summer. Balls behave as you would expect on the greens and fairways – rolling or releasing at times or backing up or sitting down quickly at others. 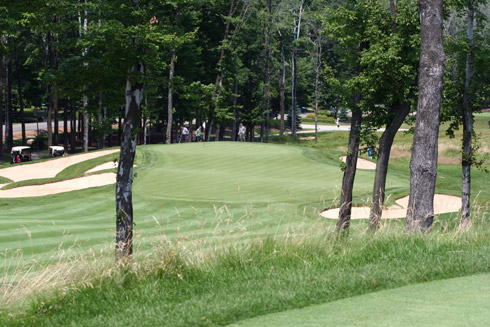 The seventeenth green – seen here from tee #16 – has several levels. If you do go for this par five in two, you’ll want to leave your shot to the right if anything.

Little Mountain is widely known for its bunkers, some of which are as deep as twenty feet below the green surface, and the care they take must be phenomenal. Yet they, too, are maintained more than adequately. Though you may often find unraked footprints, you can blame the foursome in front of you for that, not the maintenance staff.

Design and Layout
Designed by the same fellows – Michael Hurdzan and Dana Fry – that recently brought the world the renowned Erin Hills, LMCC is a target golf course that provides ample opportunity for the heroic and the tragic. The scratch golfer will have little trouble navigating the course if he can place his ball in the proper spots around the course’s 6,628 yards, but shots that miss their often very wide target will pay a substantial penalty. The bogey golfer will likely want to play the white (6,119 yards) or gold (5,554 yards) tees, because they’ll still find themselves in plenty of trouble. 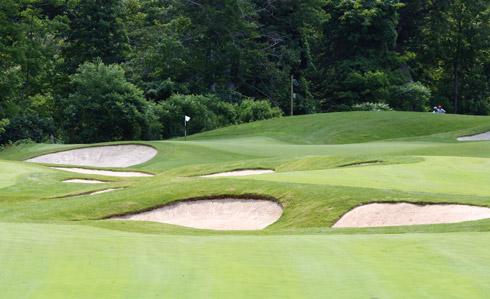 Nature butts right up against the left side of the eleventh green. You’d better miss right, if anywhere.

Little Mountain features some of the deepest bunkers I’ve ever seen, both greenside and off the fairway. Several photos in this review illustrate this point quite well, and golfers are well advised to avoid the sand-filled pits at LMCC.

Most courses with gimmicks like “deep freakin’ bunkers” tend to go overboard, but LMCC remains eminently playable. The bunkers are strategically placed to challenge the better golfer while ample room is provided for the golfer who doesn’t quite feel up to the challenge.

The fifth hole, for example, is a near-90° dogleg. I typically despise such holes, but this hole smartly tests your bravado from the tee and rewards the brave who can execute with a shorter approach. You can hit anything from a 3-iron well right of the gaping fairway bunker to a three-wood or driver over the bunker. The first option will leave another 3-iron to the green, while the latter rewards you with a wedge. Come up short, and you’ll be faced with the bunker shot presenting the chap in the red shirt below: 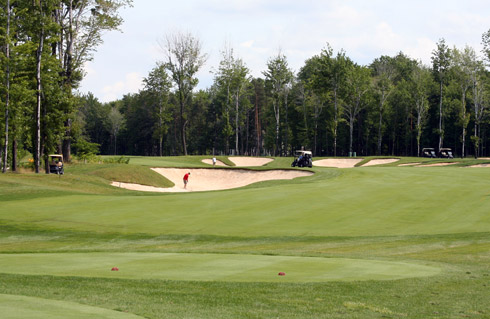 The tee shot at the par-four fifth can either challenge the large fairway bunker that’s trapped the fellow in the red shirt, or be played safely to the right, which leaves a long-iron approach to a narrow, elongated green.

The presence of a strong strategic element is one of the surprising features of LMCC, in fact. Most target golf courses get a little boring after repeated play, but LMCC toys with the mind of the better golfer. The tenth hole – a 471-yard par 4 – is set alongside a massive gorge to the left. Do you pull driver and attempt to reach the green in two or do you play safely with 3-wood or hybrid, a layup, and a possible one-putt par or an easy bogey?

The eleventh hole features a split fairway, challenging golfers to find a thin shred left or right of some deep fairway bunkers. Pin placement and local knowledge – as well as absolute faith in your shot shape – is critical in picking the best route on any given day. And then golfers venture to the twelfth, a 135-yard par three with a deceptively wicked green. Again, shot selection (and the ability to pull it off) are key. 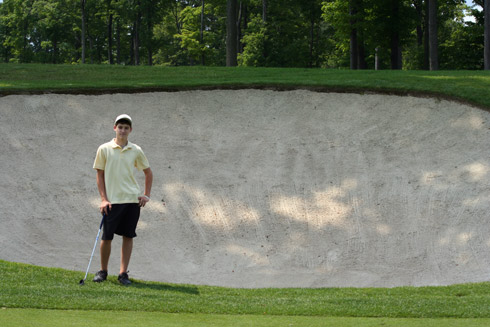 Some of Little Mountain’s bunkers are largely for show: this one isn’t overly deep, and it’s unlikely a ball would ever stop on the severe slope… 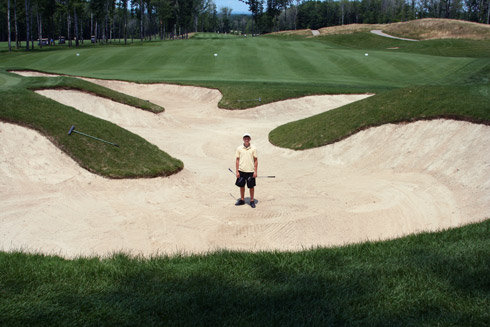 … but most of the bunkers are incredibly penal and quite deep, making short-siding yourself a definite sin. In this image, you can just see the green to the left. This bunker is 15 feet deep.

Little Mountain plays to a par of 70 with outgoing and incoming nines of par-35 each. With three par-threes on the front to complement the two par-fives and only one par five on the back to go along with two par-threes, golfers will use every club in their bag to get around Little Mountain. The par threes range from the dainty second and twelfth (100 and 135 yards respectively) to the beefy sixth (234 yards). The par fives play, from the blues, to yardages of 582 at the opener to 524 (#7) and 552 (#17). Par fours range from the nearly drivable #8 (341 yards, but quite a bit downhill) to the stern tenth, thirteenth, and eighteenth (471, 487, and 481 yards respectively).

I haven’t yet talked much about the bunkers, but I don’t know that I have to. Some of the pictures included in this review don’t do the bunkers at Little Mountain justice, but you get the idea. A word of advice: avoidance. A few more words? Stay the heck away from the bunkers. The average depth of a greenside bunker at Little Mountain must be ten feet, and some are as deep as 20 feet below the putting surface. The steep walls are intimidating, but a golfer who is able to control his ball will always be able to get around the course. The fronts of most greens are available for run-up shots, rewarding the creative golfer who isn’t able to fly it and stick it, while punishing the golfer who thinks he can fly it and stick it but can’t.

My only complaint about the layout of the course is that the finishing hole is so dramatic and so damn difficult, I am annoyed when the course “flips nines” and starts you on the tenth hole, as management seems to have players do every other day. The finishing holes, from 16 through 18, all deserve to play as finishing holes. The 7th, 8th, and 9th are much weaker in comparison.

Finally, as a modern course, houses are nearby. Fortunately, the McMansions scattered about the edges of the course are not close enough to come into play unless you intentionally aim well left or hit a snap hook to end all snap hooks. They’re set back a few hundred yards from reasonable lines of play, but they do provide interesting viewing through the trees. 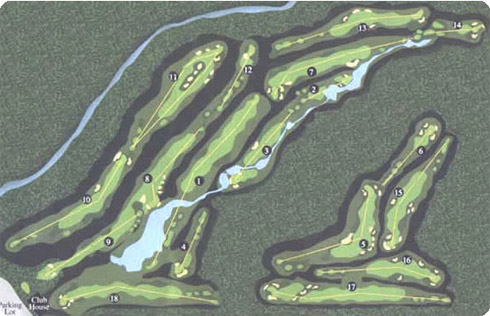 Where you don’t see golf holes, imagine McMansions. But don’t fret – they’re set well back and don’t come into play.

Bang for the Buck
For a maximum of $77, Little Mountain is an excellent value, particularly when compared to the other five-star courses listed earlier. If you take advantage of specials or less expensive tee times, a trip to Little Mountain may set a foursome back less than $200. Memberships (of two varieties are available and rather affordable as well, with family memberships running $345 monthly.

Compared to the other five-star courses listed in Golf Digest’s rankings, Little Mountain is probably the most affordable on the list, making its “bang for the buck” quotient quite high. Located just east of Cleveland and within a two-hour drive for those in Columbus, Cleveland, and Pittsburgh, it’s well worth the trip. 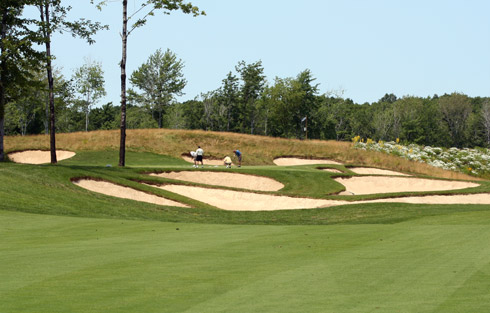 The smart play on the short par-four fifteenth is to drive right of these bunkers for an open approach.

Conclusion
I’ve played on a few of the five-star courses (Bethpage Black most recently), and at the rates Little Mountain charges, it is hands down the best value. That it’s located so close to me only makes it more attractive.

Little Mountain features some incredibly deep bunkers, but doesn’t punish the careful player. The course can be had, but it can have you, too, if you can’t control your ball. Unlike most target golf courses, LMCC has a strong strategic element that I found refreshing. Lots of risk/reward possibilities present themselves, and the difference between a heroic shot and a tragic shot is often separated by a very thin line.