It’s finally happened. Tiger Wood’s 334-week reign atop the World Rankings is over. Vijay Singh won the Deutsche Bank Championship to claim the top spot, making him only the twelfth golfer in 18 years to hold that position.

Luis Carbonetti from Argentina won the European Senior Masters at the Duke’s Course in Woburn, England. In last place, however, was Nigel Mansell, the former Formula 1 and Indy Car world champion, finishing at 28 over. Apparently, despite trying to keep his game on track, his rounds were plagued by bad driving, leaving him well off the pace (ahem…).

David Duval makes a cut – and finishes tied for thirteenth.

Let’s not overlook David Duval this week. David not only made the cut – something he’s failed to do for 14 months or so – but he finished T13 with a 4-under 67 on the closing day of the Deutsche Bank Championship. This is his best finish since T6 in a 2002 event in Las Vegas.

David will win a tournament in the next two years. That’s my prediction and I’m sticking to it.

Vijay has taken over the World #1 ranking. How long until Tiger gets it back?

Vijay Singh is now the number one golfer in the world, according to The Official World Golf Ranking, by a slim margin: 12.72 to 12.27.

Congrats to Vijay. Hard work does pay off.

Now, the question being asked is simply this: how long until Tiger gets it back? He played really well last week…

Moe Norman, the eccentric Canadian golfer with a “Natural Golf” swing, has died.

Vijay pulls out the pliers and the blowtorch and put Tiger’s hopes of remaining on top of the Tour in the hurt locker.

After starting off today down three strokes to the top player in the world, Vijay Singh turned on the heat today at the Deutsche Bank Championship. Vijay shot a tournament-low 63 today to couple with yesterday’s 68 and leave him at 131, two strokes ahead of Tiger Woods, Bill Haas and Richmond, VA native John Rollins.

While he’s turning up the heat on Tiger, Vijay’s playing it cool as a cucumber. “Yeah, if I win this tournament, I’ll be No. 1. Fine,” said Vijay. “But what would that change for me? I’m going to go out there next week and do it all over again.”

Vijay started off his round with an eagle, and made the turn with three more birdies and only one bogey. He kept the pace up on the back nine, with five birdies and another bogey, bringing him to eight-under for the day. Haas was equally strong today with a second-round 64, while Rollins remained consistent, turning in a five-under 66 to accompany yesterday’s four-under 67. With two rounds to go, it looks like the field will be playing to catch Vijay.

The tournament continues with the third round tomorrow at the TPC of Boston. 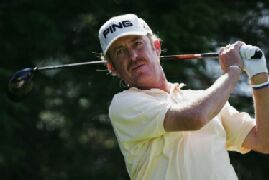 Saturday proved to be a game of “Anything you can do, I can do better” in Switzerland, as Sergio Garcia and Luke Donald were bettered by fellow Ryder Cup teammate Miguel Angel Jimenez. After starting with an eagle, Garcia gave up the lead on the back nine as Jimenez posted a third-round 66, two better than Garcia’s 68. Luke Donald posted a third-round 65, which earned him a share of second place with Garcia.

In addition to the friendly competition before the Ryder Cup matches in two weeks, Jimenez is also looking for his fifth win this year. After rebuffing comments yesterday by Sergio Garcia that Jimenez should sit out the German Masters next week, Jimenez is angling to conquer the Omega European Masters as his sixth win in 2004, equalling the record set by fellow Spaniard Seve Ballesteros.

“I feel strong. I’m doing the right thing. I don’t feel I need to take a break. […] I have my family with me here and I’m nice and relaxed.” Instead of proving to be a tiring run of events for the 40-year old, Jimenez appears to be thriving with the competition, and a thriving Jimenez could spell trouble for the Americans at Oakland Hills.

However with Tiger playing well in Boston, my figurative money’s still on the Americans.

European Ryder Cup teammates Sergio Garcia, Miguel Angel Jimenez and Luke Donald command the leaderboard during the second round of the European Masters in Switzerland today, displaying the reasons they earned their places on the team.

Sergio Garcia goes into the third round 11-under par after pairing yesterday’s 66 with today’s blistering 65. Jimenez is one shot back at 10-under, and Luke Donald is three back of Garcia at 8-under.

While the Europeans may appear at the top of their game, cracks may be appearing in the team’s relationship. When 24-year old Sergio Garcia suggested that his 40-year old teammate Jimenez skip next week’s German Masters so he’d be on the top of his game for the Ryder Cup, Jimenez appeared to bristle.

Tiger Woods is in at six-under par, tied for the first-round lead. 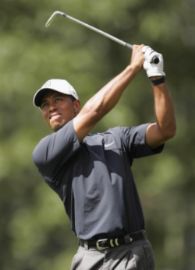 Tiger Woods looked strong in Boston on Thursday, shooting six-under at the Deutsche Bank Championship. His first-round 65 was good enough to tie him with Tour rookie Ryan Palmer, who missed equaling his best round of the year by one stroke.

Joining Tiger on the leaderboard is his neighbor Mark O’Meara, who hasn’t finished better than 10th this year, and who has gone winless on the PGA Tour since winning the British Open in 1998. Two others join O’Meara at five-under, and five are tied for sixth place at four-under. Vigay Singh is three-back of Woods at three-under, and after the first round it doesn’t appear Tiger needs to worry about losing his Number One world ranking to Singh.

Tiger appeared in command of his driver today, a welcome change for the top-ranked player in the world. Plagued with missed fairways of late, Tiger kept the ball in play and converted his putts to keep himself ahead of the pack. Tiger made the turn at two-under, then turned it on for the back nine, sinking four birdies and keeping his bogey on the par four third hole his only bogey of the day.

2003 winner Adam Scott entered the clubhouse with a two-under 69, four shots off the lead and tied with sixteen others for 21st place. Scott is looking to defend his title and earn his third win of the year.

Michael Long looks to defend his title at the Virginia Beach Open.

Michael Long looks to defend his title at the Virginia Beach Open next week in Virginia Beach, Virginia. Winning last year with a eleven-under 277, Michael and the rest of the Nationwide Tour field returns to the TPC at Virginia Beach for four days of golf.

Michael, who is happy just to be golfing after a scary neck injury five years ago, missed the cut at last week’s Envirocare Utah Classic. Brett Wetterich took home the purse from Willow Creek Country Club by continuing to pound the ball past his opponents. Wetterich, currently second in driving distance on the Nationwide Tour, joins Long next week in Virginia Beach.

With Hurricane Frances bearing down on the east coast, this year’s Virginia Beach Open could shape up to be as wet as last-year’s rain soaked event. Your Intrepid Reporter will be attending the final day of golf at the TPC and bringing you firsthand coverage of the event, with or without my trusty umbrella.