Exploring the backstory of the world’s hottest player.

After about three years on the Nationwide Tour and six more of middling PGA Tour play, Brandt Snedeker broke through during last year’s FedExCup Playoffs, and won the $10 million top prize. Snedeker, who won earlier in the year at Torrey Pines, beat Justin Rose by three strokes down the stretch at the Tour Championships, vaulting him ahead of Jason Dufner, Tiger Woods, and Rory McIlroy to win the Cup.

Snedeker has a few major championship close calls, and though he had yet to pull it, Sneds is a pretty solid bet to win one over the next few years. Let’s jump in.

Hole One: Childhood
Brandt Snedeker was born on December 8th, 1980, in Nashville, Tennessee. Snedeker and his brother Haymes (who won Golf Channel’s The Big Break X: Michigan) were in introduced to the sport of golf by their grandmother, who was the manager at a golf course in West Plains, Missouri. Brandt played golf throughout high school at Montgomery Bell Academy and was a two-time Tennessee State Junior Player of the Year as well as a two-time Tennessee high school state champion.

Hole Two: College and Amateur Career
Snedeker was given a college scholarship to Vanderbilt University, where he starred. Snedeker was one of the best collegiate golfers in the country, and was the first even Vanderbilt Commodore golfer ever to be named first-team All-American in his junior year. Sneds was briefly the top-ranked collegiate golfer in the country by Golfweek. In addition, Brandt was the 2003 SEC Male Golfer of the Year, a three-time All-SEC golfer, and the first Vanderbilt golfer to qualify for NCAA regional play. 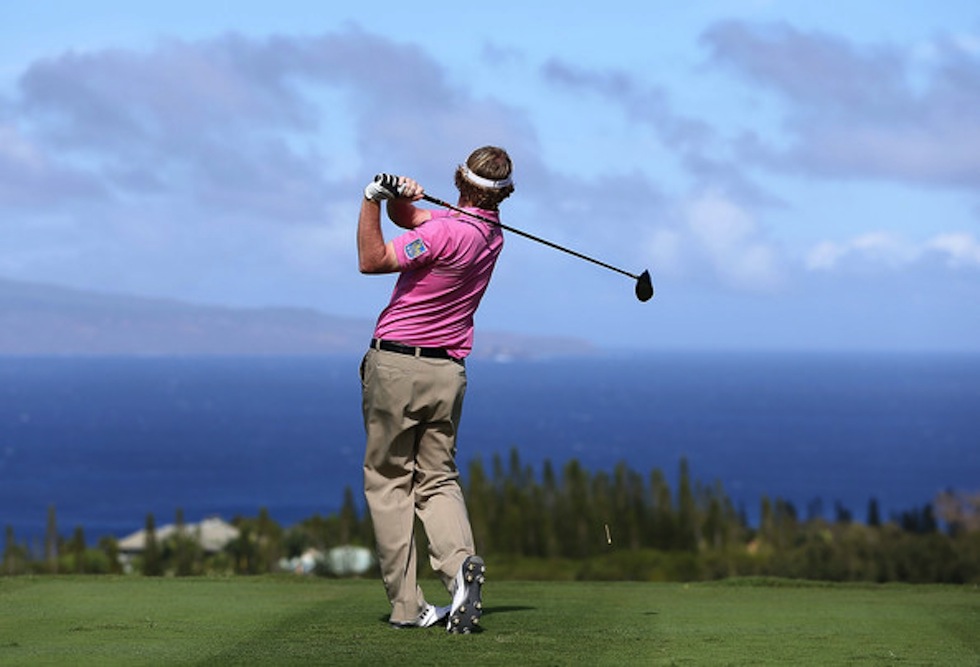 As a 22-year-old, Snedeker won the 2003 U.S. Amateur Public Links Championship, beating Dayton Rose 10&9 in the 36-hole final at Blue Heron Pines Golf Club. He earned a spot in the 2004 Masters as an amateur, and finishes T41 soon before turning professional.

Hole Three: Nationwide Tour
Sneds played his initial professional season half on the PGA Tour and half on what was then called the Nationwide Tour. Aside from The Masters, Snedeker made just three other cuts in eight PGA Tour events, finishing T27 at the Byron Nelson, T72 at the St. Jude Classic, and T76 at the B.C. Open. He faired much better on the Nationwide, making cuts in eight of his 11 events and recording five top-tens.

Snedeker played more on the Nationwide and less on the PGA Tour in 2005, going winless and making roughly the same money in over twice as many events after getting off to a hot start. He finished 45th on the money list, same as in 2004. Snedeker missed the cut in his first U.S. Open appearance.

Brandt played exclusively on the Nationwide in 2006, and had his most most impressive season to date. Despite missing five weeks in late summer after breaking his collarbone, Snedeker won twice and recorded a second-place finish, all in playoffs. In each of his wins, he managed to get into the playoff only with eagles on the 72nd holes. Snedeker made over $300,000 that year, and finished ninth on the money list, earning him a full-time PGA Tour card. 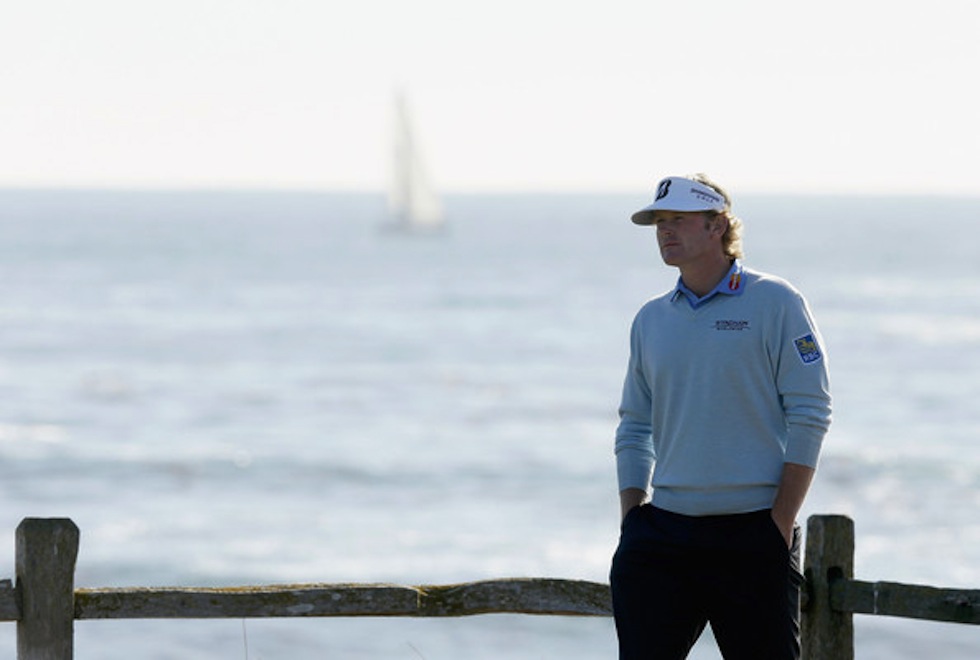 Hole Four: 2007 PGA Tour Rookie of the Year
Not a lot of fanfare followed Brandt Snedeker after his 2006 season and his first two mediocre PGA Tour events, until the first round of the Buick Invitational at Torrey Pines. Despite never playing the course in a professional setting, Brandt shot a course-record 61 on the North Course en route to a third-place finish, losing only to Tiger Woods and Charles Howell III.

Sneds went into a mid-season lull though, recording a bunch of high finishes and a handful of misses cuts. His game picked up in the summer though, with a T5 finish at the St. Jude Championship, T8 at the AT&T National, T7 at the Canadian Open, and, finally, his first career PGA Tour win at the regular season-ending Wyndham Championship.

At the Wyndham, Snedeker dropped a 32-foot birdie putt on the 71st hole to cap off a Sunday 63, which putt him two strokes ahead of Tim Petrovic, Billy Mayfair, and Jeff Overton. Sneds finished the regular season ninth on the FedExCup point list, and won nearly $3 million over the season. Brandt was named the PGA Tour Rookie of the Year.

Hole Five: PGA Tour Career
After the hot start to his PGA Tour career, Snedeker lost his way a bit. He went winless for three years, and had several near-misses in major tournaments. After his ROY season, Snedeker played well in 2008’s first two majors, finishing T3 at The Masters and T9 at the U.S. Open. Snedeker led briefly at The Masters, and could have won with just a 72 on Sunday. His final-round 77 put him behind winner Trevor Immelman and Tiger Woods, though only by a few shots. Despite getting off to a seven-over start over the first few days, Snedeker shot a 68 on Saturday and back-doored his way to a top-ten finish at the U.S. Open. The rest of 2008 consisted of mostly missed cuts and poor finishes.

2009 was Snedeker’s worst year on the PGA Tour to date (though his “worst” still isn’t all that bad). He made the cut in only three events going into the U.S. Open, and didn’t finish in the money at any of the season’s majors. Snedeker made less than $1.5 million, about half what he made in 2007. 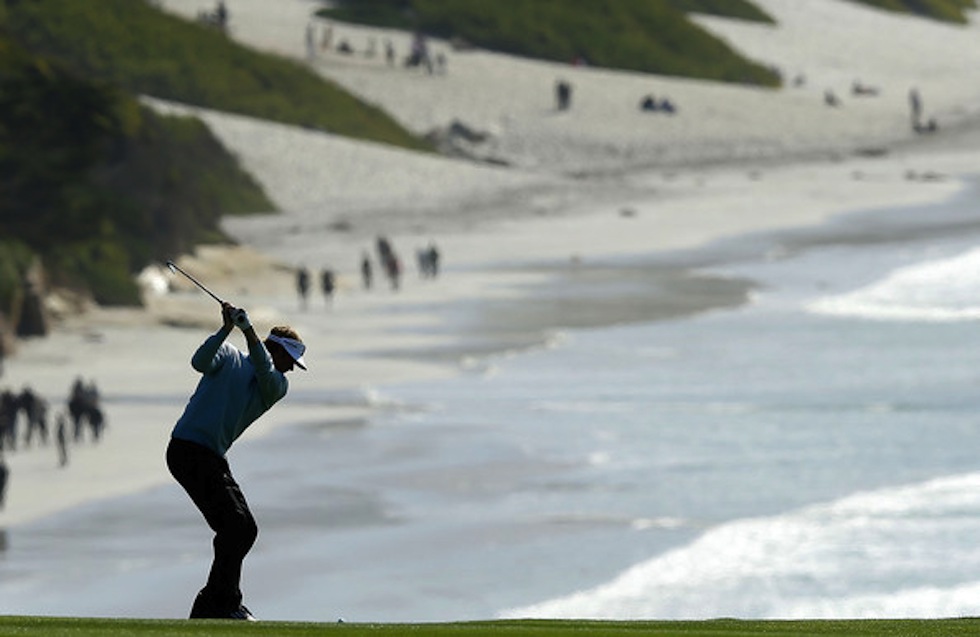 After getting off to a hot start at Torrey Pines with a T2, Snedeker had another less-than-stellar 2010. He back-doored his way to a T8 finish at the U.S. Open, one of just five top-tens the entire season.

Hole Six: 2011-2013
2011 was the beginning of Brandt’s return. After another high finish at Torrey Pines, Snedeker recorded additional top-tens at the Phoenix Open, the Transition Championships, and the Valero Texas Open. A week removed from a final-round meltdown, Snedeker finally broke down the barrier, winning his second career PGA Tour event at The Heritage (Harbour Town). Snedeker came from six strokes back of Luke Donald on Sunday just to get into a playoff, and won with a par on the third playoff hole. Sneds played well the rest of the seaosn, with high finishes at the U.S. Open (T11), The Barclays (T3), and the Deutsche Bank (T3). Snedeker earned over $3.5 million on the season, good for 14th on the money list and 18th on the regular season FedExCup list.

If 2011 was the beginning of his return, 2012 cemented his status as one of the best players in the game. After year upon year of high finishes at Torrey Pines, Snedeker finally won the Farmers Insurance Open. He went 67-64-74-67, and wound up with a playoff when Kyle Stanley collapsed on the 72nd hole. Sneds had to come back from seven shots back, but ended up winning on the second playoff hole. He continued to play well throughout the year, though no one was picking him as a major contender going into the Open Championships. Brandt recorded a T3 finish despite a wicked duck hook down the stretch on Sunday, good for his best major championship finish to date.

After entering the Playoffs 19th in the standings, Snedeker finished second at The Barclays and sixth at the Deutsche Bank. Due to the Vijay Rule, fifth-place Snedeker went into the Tour Championships knowing that a win would cement him the $10 million prize. Sneds went 68-70-64-68 to win by three shots over Justin Rose at East Lake, catapulting him to ninth in the World Rankings. 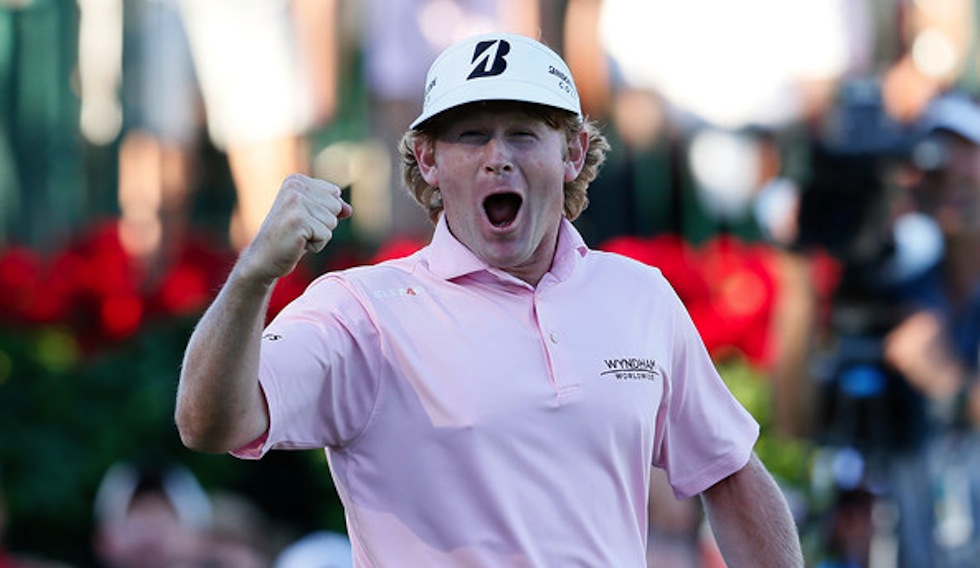 Brandt picked up 2013 right where he left off, finishing third at the Tournament of Champions, T2 at the Farmers Insurance Open, and second at the Phoenix Open. With over $1.5 million already in the bank, Sneds then won his fifth PGA Tour event, the AT&T Pebble Beach National Pro-Am, and moved up to a career-high fourth in the Official World Golf Rankings.

Hole Seven: Snedeker on Twitter
Brandt might not be the prolific twitterer that I found Jason Dufner to be last year (Sneds just joined a few weeks ago), but he is a pretty solid follow. Here are a few of his better posts:

Had a great shoot this morning at TPC sawgrass with golf digest.. Glad to be back home in Nashville even though its freezing!!

Never thought I would see Tom getting twitter lessons from these guys!! pic.twitter.com/r15ROykR1v

I have officially joined the social media world!!! Please be kind.. I have no idea what I am doing!!

Hole Nine: Snedeker’s Bag
Brandt is a Bridgestone staffer, though he does fill out his bag with a few other brands.