Put a driver in Patrick’s hands and there is no telling what will happen next. Our job is to change that.

Patrick Conley has has been playing golf since he was 12 years old and has now reached a point where he is asking for help. He typically scores in the mid to high 90s but he is absolutely mortified of his driver. On his best shots, his drives will go 280 yards; on his worst, they will slice off the planet and go only 230 yards. His goal, like many golfers, is to improve.

For a golfer that shoots in the mid-90s your first thought might be that he has a pretty darn good swing. Unfortunately, in slow motion, you notice some enormous flaws that are truly holding Patrick back.

Read on to see Patrick’s swing and the fixes I’ve outlined for him.

Patrick’s swing can be seen here as a QuickTime movie. This shows the down the line and face on angles with his driver and 6-iron. I would highly recommend for you to watch the video, identify what you have found as his root problem, and then read on.

I cannot stress the importance of getting a proper club fitting enough. We may all disagree about which driver or irons are better than one another, or even the manufacturer of the shaft that we prefer but it is inexcusable to be swinging with a shaft that is too weak. When I was at my prime I got yelled at by a Mizuno fitter for playing with stiff shafts in my irons (I thought he was a jerk). However, on my first round out with my new irons I shot a 65. Yes, I played pretty well but it seemed effortless to hit the ball straight rather than waiting on a curve to the left or right.

So where am I going with all this? Well, take a look at the two frames below from Patrick’s driver and 6-iron swing. 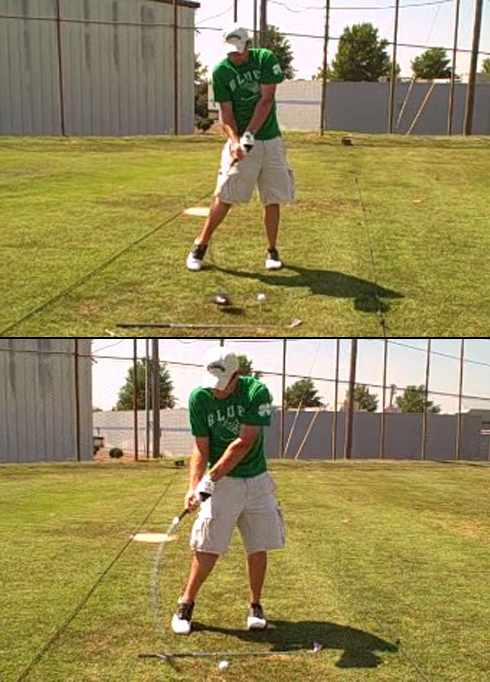 Wow is right. His hands are still pointed away from the ball by about 15 degrees and the clubhead is literally at the ball. I don’t know about you, but it seems like hitting a golf ball straight might be somewhat difficult with shafts like these.

My Advice
I am not a fitting expert by any means, but I believe you should always err on the side of a stiffer shaft. I think that any loss in distance with a stiffer shaft is worth the gain in accuracy. Moreover, I just don’t like having to reshaft my clubs; it’s both time consuming and expensive. Lastly, if you truly are working on your technique, then odds are you are going to see an increase in your swing speed. Seems like that would be bad if you bought a $400 club, got an amazing $40 lesson, and then couldn’t use that club anymore. But that’s just my opinion.

Before we jump into what I believe is the primary problem with Patrick’s swing, let’s review what our posture at set up should look like. Just as a reminder, the goals of your posture at set up include: 1) to put yourself into the best position possible to remain balanced and 2) to allow your muscles to work most efficiently. Let’s use David Duval’s posture from 1999 as an example. 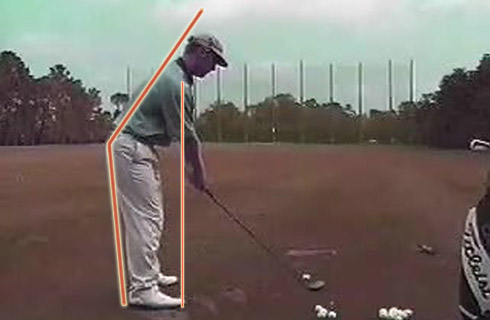 With his driver, Duval is leaning towards the ball approximately 35 degrees with his upper body and is leaning away from the ball by approximately 8 degrees with his lower body. While Duval is just one example, these numbers appear for Hogan, Tiger, as well as lots of other tour players. This does not mean that these numbers are perfect for you but they are a great starting point.

While this is a slight oversimplification, the butt of the club should be just outside of your shoulders with every club in your bag. 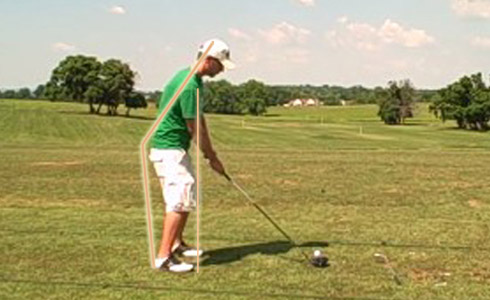 Patrick’s set up is very similar to to what a lot of amateur golfers do. More specifically, he has a slight flex in his knees but his shoulders are positioned almost directly over his hips. He feels like he is bent towards the ball but all he really is doing is allowing his spine to curve at the very top of his back. This is a DANGEROUS position. I don’t mean this in terms of shot direction – although that’s not good either – but any time your spine is bent during your swing you are risking a major back injury. This would absolutely be the first thing that I would address with Patrick. 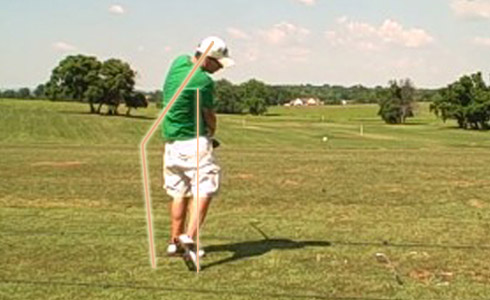 Assuming that Patrick is able to fix his posture at set up I am willing to bet that his posture through the ball will still be a problem. Look at Duval’s position at impact from 1999 and compare it to Patrick’s. 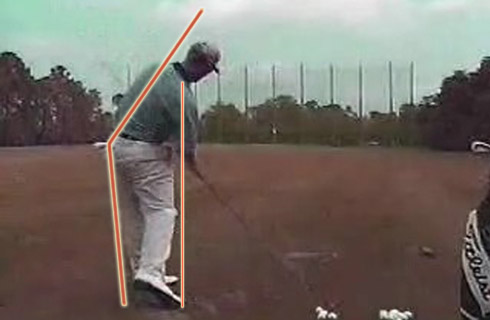 There are several parts of Duval’s impact that are worth copying. One, even though Duval is dipping just slightly, his spine is still very straight through impact. Two, Duval’s hips remain angled back away from the ball throughout his downswing and follow through at an angle that is nearly identical to his set up. Three, Duval’s right leg never moves towards the ball but instead moves towards the target. Combining all of these traits Duval created an incredibly strong and fluid swing.

Now look at Patrick’s impact position. One, Patrick very clearly has a “C” like bend in his spine. Two, Patrick hips are clearly moving towards the ball at impact. Three, Patrick’s legs are moving towards the ball as well. Combined, you have an impact position that not only is risking injury to your back but makes it incredibly difficult to create a repeatable swing.

Set Up
Start with Your Legs
If legs in the golf swing are relatively constant across players, then it seems this is a good starting point regardless of whether you are a beginner or not. In order to achieve that 13 degree angle you are not trying to lean back but you are creating a greater angle by bending your knees. The more you sit down and get closer to the ground, the greater of an angle you are creating.

Put yourself into a balanced position – one where you feel someone could push you and you would not fall over – and see what kind of angle you are creating. If you can’t measure the angle try simulating the impact position while leaning your legs as much as you can away from the golf ball with your butt barely touching a wall. If you are not pressing into the wall with your leading hip at impact, you likely did not create enough of an angle. Bend your knees a little more and then try again.

Then Your Upper Body
This is extremely tricky considering how different players height and weight are. I would highly recommend starting with 35° with all of your clubs and then adjust from there. More important than anything though: your back should absolutely, positively not be slouched over at set up. Your spine should appear straight as a rod at set up. If it is not you are setting yourself up for a major back injury. This may feel uncomfortable at first but you should make the adjustments now before a doctor has to make them later.

Then Position Your Arms
Without a ball at first, I would practice positioning the butt of the club slightly outside of my shoulders pointing between anywhere from my belly button to belt buckle. Positioned correctly, your leading arm should be pretty close to straight. After this, I would make sure that the bones of my leading hand and my leading forearm form a nearly straight line. This slight adjust will likely straighten your leading arm even more putting you in a very strong stable position.

Then Position the Ball
Once you have this positioning down, add a golf ball. I would recommend this order because it is hard to resist setting up to the golf ball and then fiddling around with our set up again. I would work on making this comfortable first and then check yourself when you set up to the golf ball. In the long run, you do not want to take golf swings that are inherently flawed at the set up. Practice getting this right first.

Impact
This is much more tricky. As a general rule I try to solve any swing flaw with your core muscles first. For most golfers, the position that Patrick is in is caused by the motion of his hips towards the ball. Some golfers need only a quick swing thought while others need a lot more work. There are literally hundreds of different ways to address this so I’ll put two below.

Point Your Belt Buckle Towards the Ground
The first swing thought that I would recommend is for the player to be conscious of where their belt buckle is pointing during their swing. You want to “feel” like your belt buckle angled towards the ball rather than horizontal to the ground. If you can feel like you are keeping your hips on that plane then you should be able to maintain your posture throughout your swing.

Overturning Your Hips
For golfers that are hoping to achieve a Duval-like motion with their hips, the next swing thought that I would focus on is trying to feel like you are trying to finish with your belt buckle pointed significantly left your target. The idea behind this is relatively simple. Because your legs are attached to your hips, your legs will follow where your hips go. If you turn hips to point left of the target then your hips will pull your legs towards the target rather than allow them to wander towards the ball. 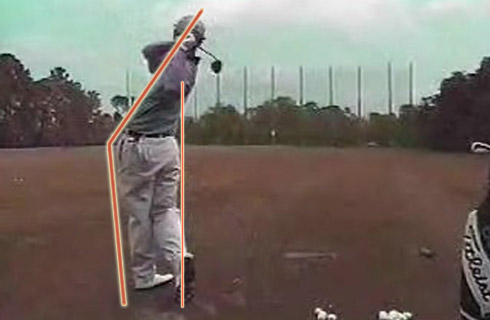 Time Line: Correcting your posture at setup can be a relatively easy fix but fixing your posture through impact can take months. However, this is definitely a change you want to make sooner rather than later considering the impact it has on your swing plane and power.

Be sure to monitor… your back muscles. When you are making a major change that involves your back muscles do not push yourself too hard too early on. If you feel tightness, take a break. Do not injure yourself. TRUST ME!!! There is always tomorrow (so long as you don’t tear the muscles off your spine).

Whether you are a serious golfer who hopes to play on tour or a weekend golfer, the amount of stress we put on our back is immense if you don’t maintain your posture throughout your swing. In my mind – which is incredibly biased based upon my own back injury – there is no change more important. I hope you consider making the change too.