My pre-disaster visit to Japan found a golf-crazed nation. With recovery well on and Tokyo now safe for visitors, I’m itching for a return trip.

Several months before the catastrophic earthquake and subsequent tsunamis rocked Japan, I had to opportunity to spend a week in the country. On so many levels, I was impressed and really enjoyed experience of a culture so different than what I’m used to in America’s Northeast Corridor.

The island nation struck me as impeccably clean and orderly, especially given the massive population density of Tokyo, where I spent most of the trip. It was noticeably how polite and respectful the Japanese people were to each other and to visitors, making it very easy to explore, even while only knowing a couple phrases of the language.

I’ve held off on writing this column, knowing that sports and leisure have been on the backburner as Japan has recovered from the horrible disaster, but in recent weeks, the U.S. has lifted its travel warnings, and Tokyo is spreading the message that it’s open for business.

While I didn’t have the chance to play any rounds of golf, I did find Japan’s golf culture to be very strong, which seems to be fitting since many of the tenets of the sport run so seamlessly into the culture of this island nation. While sightseeing visits to shrines were far more moving than I could have ever imagined going into the trip, I also took the chance to see what golf is like for a typical Japanese golfer. 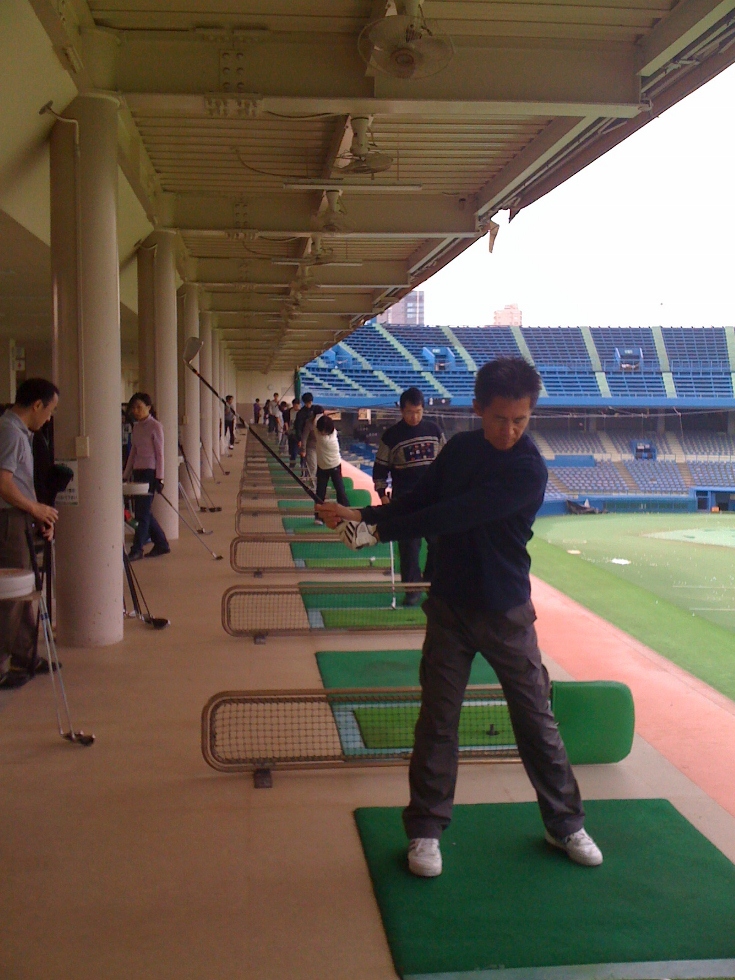 Driving ranges are wildly popular in Tokyo, where multi-level facilities are a big draw.

One afternoon I waited in line to hit balls at a popular driving range that was jam packed when I arrived. It was expensive (about $30 American), and it was built into the side of a baseball field that was dormant for the season, so a tall net caught balls hit past 150 yards or so. 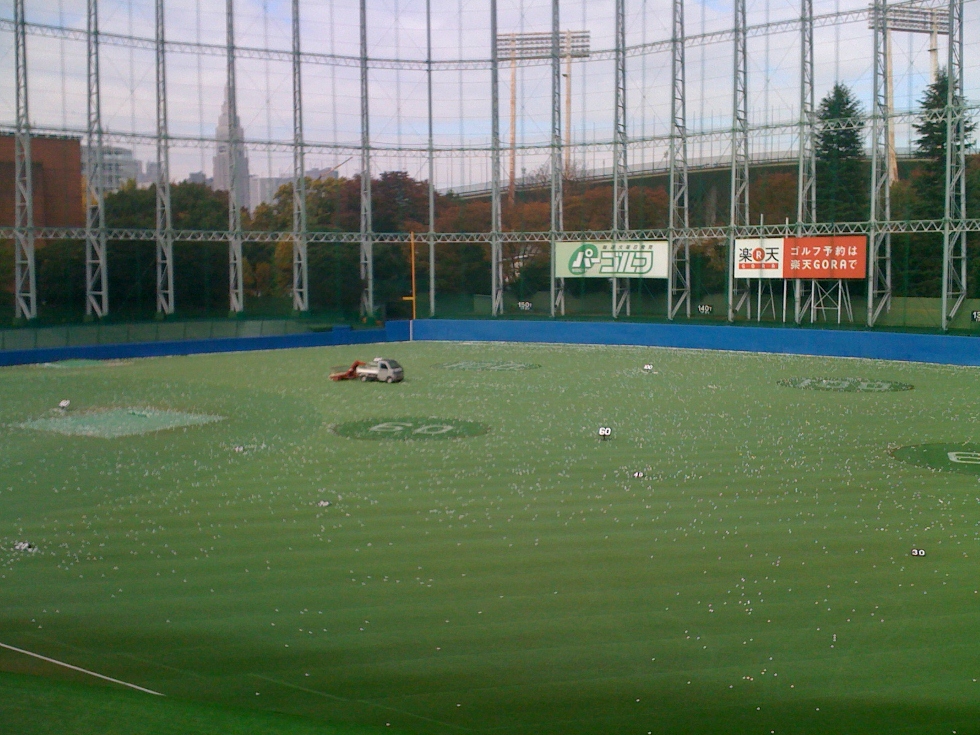 Golfers get the range when baseball isn’t in session, meaning anything longer than a short iron will smack into a net.

Rather than a bucket of balls, not surprisingly given Japan’s love of technology, you buy a pre-loaded card and the balls rise up on a tee from under the mat. This particular range had four levels, and despite the fact it was a glorified hitting net, the line was long and the stalls were all full. 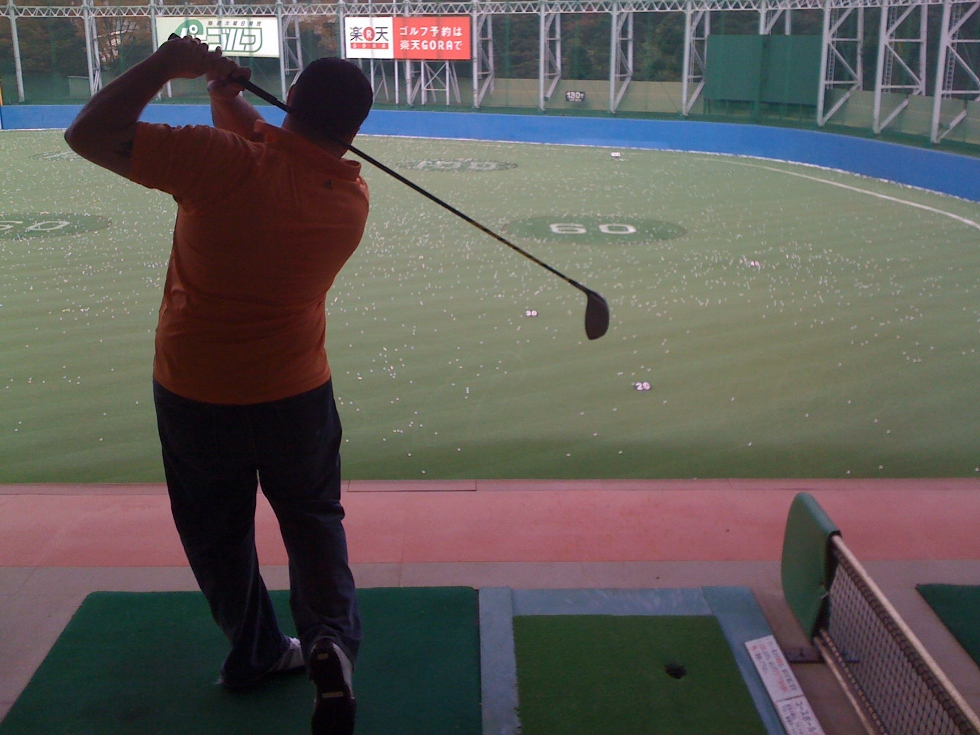 My day as a golfer in Japan was limited to banging a few drivers and taking in the atmosphere of a jammed driving range and pro shop.

Another day I wandered through several Japanese equipment shops, which weren’t hard to find. They ranged from entry-level stuff to top of the line gear, and nothing was at a discount, that’s for sure. 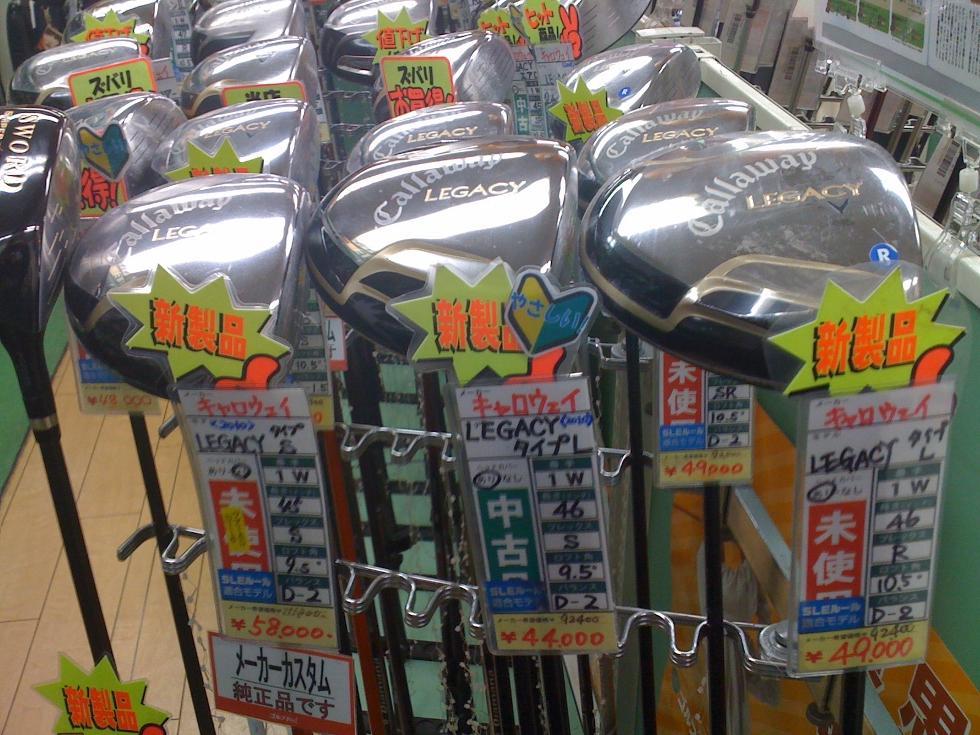 Many Japan-specific models of familiar brands filled the racks at Tokyo golf shops, although such standards as the Titleist 910 driver was available there weeks before hitting shelves in the U.S.

I asked some of the clerks who spoke English about buying habits and they said that like a lot of luxury goods, golf clubs were a status symbol. The same way someone might pay top dollar for a big-name purse or watch, golfers wanted Titleist, Mizuno, and all the brands their favorite pros were playing. One thing that really jumped out was just how evenly divided the stores were by gender, with women’s clubs taking up a far bigger percentage of the sales floor than you’d ever see at a Golf Galaxy in New Jersey. The same was true at the driving range, there was a strong contingent of ladies on hand.

Because I was so intrigued by this seemingly golf-crazed population, where land is so valuable that golf can be über-expensive, I reached out to Takeo Nishitani, an avid golfer and the chairman of public relations agency Weber Shandwick for some perspective and to see if my observations held true.

Ron Varrial: Japan is known as a golf-mad nation. In general terms, how would you describe golf’s popularity?

Takeo Nishitani: Golf is very popular among business executives, somewhat popular among women, not overly popular among 20s-30s but growing in popularity among younger people due to the emergence of young Ryo Ishikawa as a golf superstar. The pro men’s game suffered for years from a dearth of marketable personalities, but this changed when a teenage Ryo hit the fairways. On the other hand, the women’s game has had very popular personalities for the last 5-6 years (Ai Miyazato, et al), who have spurred significant interest among women – not as players, however, but as spectators. Men play the game, women watch the game. Few families participate due to cost, time restraints.

Twenty years ago, during Japan’s economic bubble, golf was incredibly popular among business executives and nuveau riche; corporate entertainment budgets were flush and golf’s traditional role (a day-long business meeting/relationship-development exercise) was perfect for the times. It was also prohibitively expensive – ordinary folk had to be content with the local driving range on weekends and maybe a few games every year. After the bubble burst, courses went belly up, and US banks and funds came in to buy up the bankrupt, rehabbing management and cutting green fees.

Most courses were formerly country clubs – only members could play or invite guests – but now most allow non-members to use their facilities (no need to have a member with you).

RV: What are some of the obstacles that golfers in Tokyo need to overcome in order to play the game?

Second is price. Formerly prohibitive green fees ($350/round) have come down but first-class clubs still cost about this much; those further out from Tokyo are cheaper ($200-$250 weekends and $100-$150 weekdays) [prices include carts but not caddy fees, which run about $30-$40] Courses have cut green fees by using internet booking. Equipment is also expensive.

TN: Yes, very much so. Japanese golfers… frequently change clubs, especially drivers (smaller bodies mean Japanese want to have the best clubs to ensure they can drive for distance). They want equipment used by the pros. Ryo uses Yonex – very popular these days. They spend a lot of money on golf clubs, especially drivers. They may spend on one driver what Americans spend on a whole set.

RV: What would you credit for golf’s popularity in Japan and Tokyo specifically?

TN: It’s an interesting game and it’s good for discussing business deals. But, also, golf’s exclusivity, which appeals to the elite/wealthy. During the bubble era, people paid up to $1 million for an annual membership; this price has now come down to $10,000.

RV: Among leisure activities in Tokyo, where would golf rank in terms of popularity and passion?

TN: Number one in passion. Japanese golfers are nothing if not passionate, given all they have to go through to get a game.

7 thoughts on “Discovering a Shared Passion In Far-Off Land”