Every now and then we’ll get a TST forum member who decides that no one is a “real golf fan.” They believe themselves to be, apparently, the sole member of this rare species. The rest of us are Phil fans, or Tiger fans, or Joost Luiten fans. Maybe they’re right.

I think I’m a real golf fan. I still love playing golf, and I love following it, but there are a lot of ancillary aspects of the sport that grate at me. Golf isn’t a particularly mainstream sport, and I think part of that owes to the general attitude of many golfers. Because allegiances aren’t (grain flow) forged at birth, golf fans tend to pick their favorite golfers irrationally, and that boils over into their general golf fandom. Black-and-white opinions bug me in general, but especially in the golf world, a sport built on a foundation of black-and-white rules, they tend to be the norm. Nuance is lost. Outrage and sensationalism wins out over enjoyment. It stops being entertainment.

Golf has always been entertainment for me. If it ever ceases to be, I’ll move on. Everyone keeps telling me hockey is great.

The first memory I have of watching sports is the 1997 Masters. That’s not just the time I got into golf, that’s the first time I’d heard of it; the first time whacking a tiny white ball even made sense to my brain. I remember watching a young Tiger Woods crush the field, showing no mercy even when his lead was insurmountable. It was like watching a superhero, which was pretty much all I normally watched on TV. Tiger Woods and Power Rangers. I was four.

Because of this, I have a different view on the world of golf than most golf writers. No one from Golf Digest, Sports Illustrated, or ESPN has the perspective I have on the career of Tiger Woods. I’m not Rick Reilly or Tim Rosaforte, and I’m definitely not Brandel Chamblee. The history of golf fascinates me, but not in a selectively-mined, sepia-tinted sort of way. 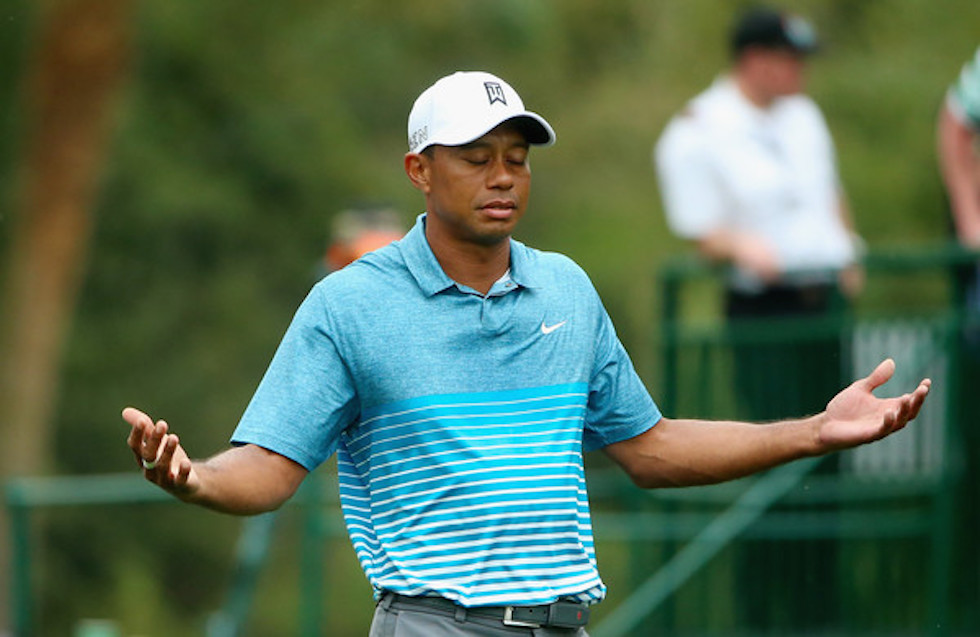 Sports fandom is irrational. It’s emotional. We pick our favorites for patently dumb reasons. Geographic location? Unless you live in the heart of the Bronx, the Yankees do no more for your property value than the Marlins. Hell, that new stadium probably cost you some money. People pick their teams based on who was winning at the time (ahem, Cowboys fans), who their parents rooted for, and even the colors of the team. None of them are thought-out reasons. No one has ever made an NBA fandom spreadsheet and came out a die-hard Blazers fan.

Golf takes that to the extreme. If we went with geographic location, most people north of Carolina would have no one to root for, and Floridians would be seriously confused. Am I fan of the guy from east of Tampa or the guy from west of Miami? What about the Jacksonville kid who went to The U?

So when I was four, I picked Tiger Woods. It was hard not to, since he went on to absolutely dominate the game of golf. I grew up watching him, emulating his swing (poorly), playing his video games (less poorly). Nike might have broken even on their sponsorship of him just because of me. I’ve still got Nike irons, and when I wear a golf hat, you can bet it’ll have a swoosh or two.

It’s one thing to latch onto a great player and accrue a rooting fandom, it’s another altogether to develop a near-Pavlovian response to their very televised presence.

My fandom fell short of hero status – I knew from a young age that I was never going to be a professional golfer. I didn’t have to look up to a professional athlete for inspiration in life, but I needed guidance on the golf course. I emulated his go-for-broke strategy, his supreme golf IQ, and I learned how to get myself out of the trouble I always seemed to get into on the course.

I remember Jim Nantz’s famous “yes you MAY!” cheer when Tiger nearly lost at Valhalla. I watched the 2001 season, the Tiger Slam, the massive win at Pebble Beach. That earlier knee injury, the 81 at a rain-soaked Muirfield in 2002. I remember his drought from 2003 to 2004, as he adapted to the Haney swing. 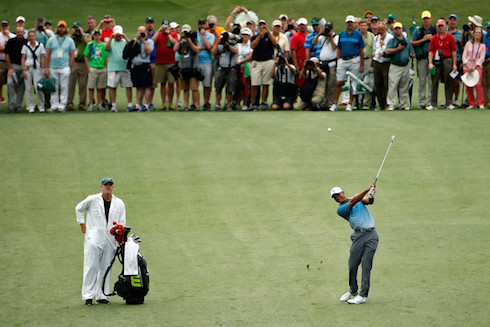 I was awe-struck as Tiger chipped in on 16th at Augusta in 2005. I remember the moment that ball came off, I though he had mis-hit it. 20 feet left of the hole? No way.

I’ve rooted for him to break Byron Nelson’s win streak the few times he’s threatened it, and I wanted him to demolish Jack’s 18 majors. (I still do.) I lived and died during his short-lived 2008 season (only Bob Smiley watched more golf than me that year). I was glued to the T.V. during the U.S. Open, especially with the rounds ending during prime time here on the east coast. I was witnessing history.

It’s not often that the guys you root for from the start make it big. Truly, world-definingly gigantic. There is no better feeling in sports than watching the players that you’ve spent so much time watching actually accomplishing their goals; your goals. It’s like watching an indie band finally make it big – you feel like some small part of that triumph was yours.

I don’t tune into a golf broadcast to learn life lessons (my guess is most people share that same view), just like I switch away when Bob Costas decides to give a halftime lecture during Sunday Night Football. I’m there to watch golf, and for all of his personal transgressions (that’s what we’ve all decided to call it, right? “Transgressions?”), Tiger Woods is one damn entertaining golfer.

But people seem to want to talk about this stuff, so yes, by all accounts he’s an asshole. Or at least he comes off as one. He doesn’t go out of his way to make the big Phil Mickelson gestures, and he’s notoriously cold and calculating with his personal persona.

I don’t need to be endlessly coddled by the athletes I watch or the writers I read or the actors I’m entertained by. I don’t need public apologies from people I’ve never met who may have insulted my delicate sensibilities. The righteous indignation that people seem to want to pile on people whose actions don’t impact them doesn’t appeal to me. 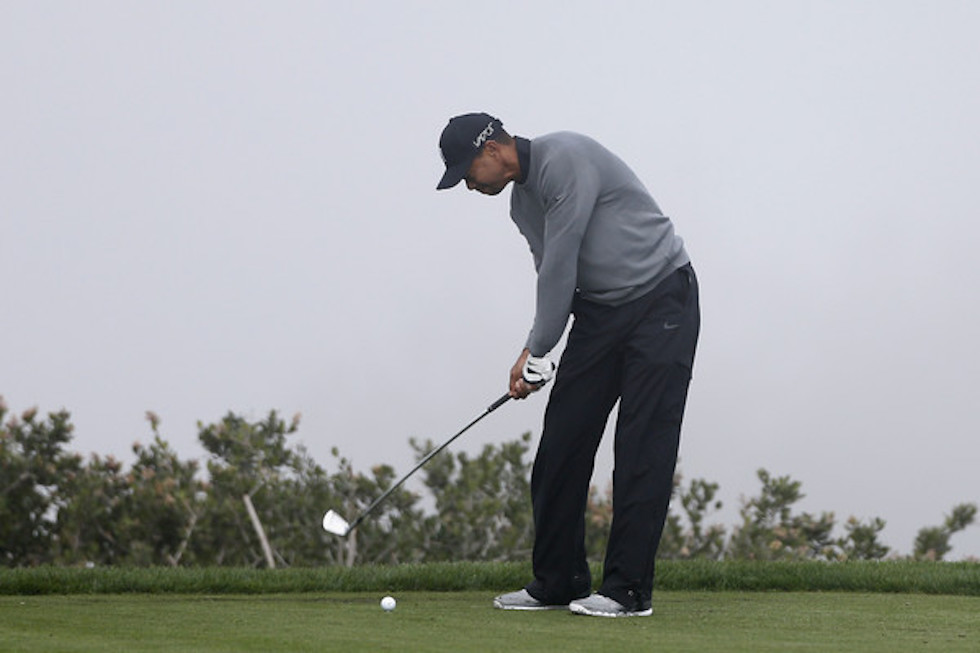 I could also talk about the good things he’s done, but you probably don’t want to hear that. So I’ll avoid mentioning the Tiger Woods Foundation, which has aided the lives of millions of children. I’ll avoid patting him on the back for the huge money he’s brought to the PGA Tour through television ratings. (Don’t believe me, TaylorMade CEO Mark King? Ask the Players Championship, or the AT&T National. Oh, you remember the AT&T National, the event that Tiger hosts to benefit his foundation and support the U.S. Armed Forces.) I should probably avoid talking about the indirect benefits that have befallen on golf companies (and not exclusively Nike), and the stores that sell their products. And courses around the country, who have in no insignificant amount benefitted from the press he has brought to golf. Nah, I won’t mention those things. That would be inconvenient.

Golf is going to be without Tiger Woods eventually. Judging by current events, the #hotsportstakes machine would have you believe that may be the case sooner rather than later, and they may be right. I’m not ready to write his eulogy, and I might never be ready to, but eventually the day will come when watching Tiger Woods tear up 18 holes of a golf course will cease to be an option.

The current young crop of golfers may be deep, and there may be a few very good players, but none of them are even close to as entertaining. None of them break the mold and break their opponents. They’re great, but bland. They’re walking stereotypes. They can’t fist pump.

Tiger will tee it up this coming week at Augusta National ranked outside the top 100 for the first time since the Clinton Administration. He’s ranked behind titans of the sport like Danny Willett, Andy Sullivan, Jerry Martin, and Justin Thomas (one of those names is fake – no cheating!). The last time we saw him on camera he probably couldn’t have beaten some of the Drive, Chip, and Putt kids around the greens.

But I’m going to watch every minute I can. I’ll have three screens going, testing the limits of my ISP’s bandwidth. Because he’s Tiger Woods. And they’re not.

So maybe I am just a Tiger Woods fan. I can live with that.

6 thoughts on “On Tiger Woods and Augusta”