The Ryder Cup is on the horizon, so I give my thoughts on who Love III should select.

After the Masters, Bubba Watson was holding the trophy the American team was the strong favorite to win the Ryder Cup. The last couple of majors had been won by Americans and the Europeans had not really been making many waves. Since the U.S. Open, however, the tide has changed a bit and with resurgences from Euros such as Graeme McDowell and Rory McIlroy, I think the Europeans are now the favorite.

I think the home-field advantage of Medinah will certainly help the Americans, but the Europeans will have only one rookie that plays on the team, contrasting the Americans have three inside the top eight and may pick up another if U.S. Captain Davis Love III selects another with one of his four captain’s picks. I do think Jason Dufner, Keegan Bradley, and Webb Simpson will play well, but they are rookies nonetheless and could easily get caught up in trying to play too well.

It seems almost a certainty that two of the four available captains picks for Davis Love III has have already been decided. By most accounts he will select Jim Furyk and Steve Stricker to the team. The remaining two picks are much more of a true unknown and adds some intrigue to the process.

Stricker is a good choice. He’s been an outstanding partner for Tiger and they have a very good combined record. Furyk is not as clear a choice. He has a very poor Ryder Cup record at 8-15-4. That’s atrocious. If there is a redeeming factor, his singles record is better. In 2010 Furyk was a dismal 0-2-1, losing his singles match to bring his record to 4-2-1 for his career.

Of course you could argue that Furyk played exceptionally well at last year’s Presidents Cup, going 5-0, plus he was a factor down the stretch at the U.S. Open. I attribute Furyk’s success in the Presidents Cup to the lighter atmosphere and decreased pressure.

The Olympic Club was tailor-made for Furyk, and I am still surprised he did not win. Outside of the U.S. Open Furyk has had a poor 2012 campaign. Still, with as many rookies as the U.S. team is likely to have, I will take Furyk for the balance. I’d rather not pick him, but the experience and his play at the Presidents Cup put him on my team.

If we go down the list, #9 is Hunter Mahan, and he started 2012 on fire, but he hit the snooze button in the second half and would not be a very good choice by Davis at this point. I would be shocked if Hunter made the team. #12 is Rickie Fowler. I think if I were the captain I would pick Rickie. He hasn’t dazzled with his performances in the majors, but I think he showed me a great deal of gumption with his play at the last Ryder Cup. Rickie would be on my team. 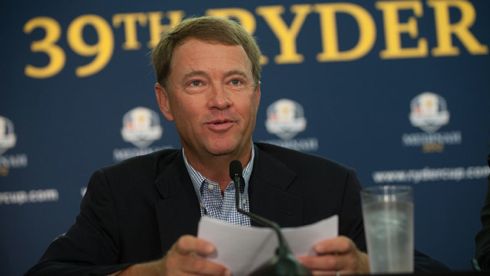 #13 is filled by Brandt Snedeker. The one thing I really like about Brandt is he is a good putter. I think that is a big key in Ryder Cup play. He is a nice guy and seems to get along well with most guys which is a nice fit in the team events. My worry with Brandt is he really has played that well since his win in San Diego, sure he has had some high finishes (namely in the British Open), but I would like to see him be a bigger factor. I do put Brandt on my team, mostly because of the putter, but I could be convinced to not pick him.

Bo Van Pelt is #14, and if not for having three rookies in my top eight I would pick Bo. He has had a very consistent season and is a very good ball striker. I would worry a little about his putting, and the nerves and being a rookie just make him a bit too risky to take my pick on. Dustin Johnson fills in the #15 spot, and with his injury earlier this year it is just too risky to give him a spot on the team. I would be very surprised if Davis picked him, but he does have some Ryder Cup experience and he hits it a long way. Still, there appears some rust from the earlier layoff.

If you go down the list there are a number of really good players that deserve a look, Robert Garrigus, last years FedEx Cup winner, Bill Haas, and Kyle Stanley. Each of those guys deserve a good hard look and if Love wanted to take a flyer one of these guys would be a good choice. I personally feel Bo Van Pelt should get picked before these guys do.

Your Thoughts
So for me, I pick Stricker, Furyk, Snedeker, Fowler. I feel I can only pick one rookie, and I pick the better putter over the better ball striker. If Davis went with Bo over Brandt, I would be okay with the choice. Let me know who you would chose.