During the PGA Championship coverage, as it became clear that 2013 would be another winless major championship season for Tiger Woods, CBS aired a graphic that included the exact date of Tiger Woods’ last major win.

What were you doing on June 16th, 2008, besides watching a wounded Tiger limp around Torrey Pines, while Rocco Mediate slowly let his only real shot at a U.S. Open slip through his grasp? I was finishing my sophomore year – of high school. I couldn’t so much as drive a car.

Here’s what the world has been up to.

Number Five: … In Tiger’s Golf Bag
Here are the contents of Tiger’s bag during the fateful duel between himself and Rocco Mediate:

All of those models have been long since discontinued, and you would be hard-pressed to even find any of them in the used bin at your local golf superstore.

The SasQuatch driver, though several years old at the point of the 2008 U.S. Open, was Nike’s first foray into the world of high-MOI drivers, and was just their second 460cc driver (following the Ignite). 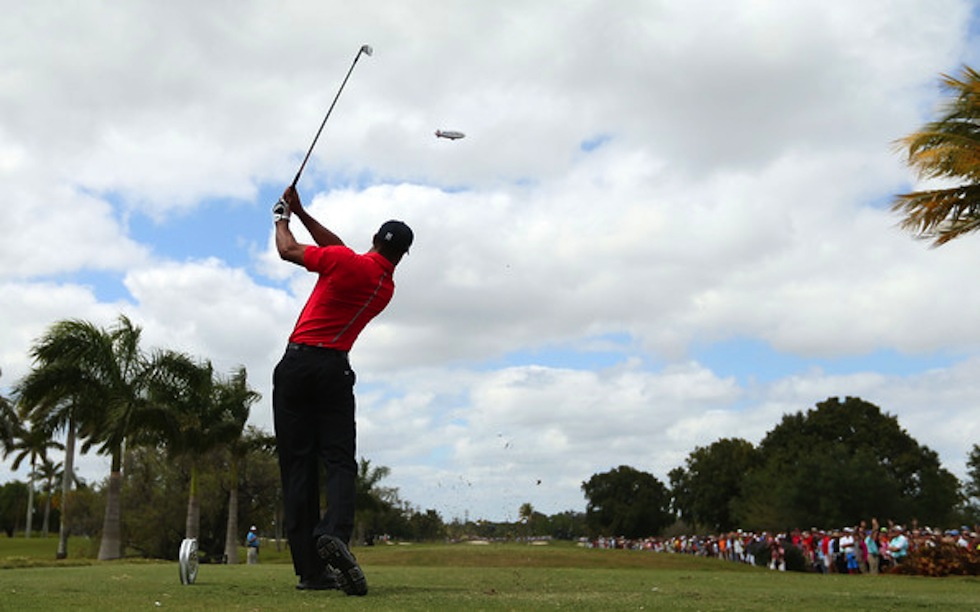 The SQ Sumo fairway woods that Tiger was carrying were the follow-up to the original SasQuatch. They remained in his bag only a short time, though their successors, the SasQuatch Sumo 2, was in Tiger’s bag until as recent as this year, before he switched to the new VR_S Coverts.

Those irons and wedges, the Forged Blades, were the pre-VR variety.

The putter is notable for being the same model that Tiger used for 13 of his 14 majors (all but the 1997 Masters, when he used a Scotty Camera Teryllium model). He first wavered from the Scotty in 2010, when he put a Nike Method (the putter he uses today) in the bag for the first time.

The One Platinum golf ball is notable for being the shortest and spinniest tour-level golf ball on the market for several years (which I’d like to source with a Golf.com test from about six years ago, but they’ve since taken the page down). Its successor was the One Tour, which Tiger did use for a while. He’s since changed to the One Tour D, which has been his go-to for quite a while. Tiger has completely forgone Nike’s RZN and 20XI lines.

Number Four: … In Media
The week of Tiger’s win, the top five grossing movies in the United States were: The Incredible Hulk, Kung Fu Panda, The Happening, You Don’t Mess with the Zohan, and Indiana Jones and the Kingdom of the Crystal Skull. The Dark Knight came out less than a month later.

The top five songs on the Billboard Hot 100 that week were: “Lollipop” by Lil Wayne, “Bleeding Love” by Leona Lewis, “Viva La Vida” by Coldplay, “Take a Bow” by Rihanna, and “I Kissed a Girl” by Katy Perry. Despite their massive record sales, Coldplay remains universally despised.

Number Three: … In Technology
In June of 2008, the iPhone was the iPhone. It was the only one. It had been released nearly a year prior, and was first available on AT&T’s EDGE network. Its only apps were the ones that came pre-installed. You couldn’t send pictures via text message, you couldn’t copy and paste, and the term “iOS” had yet to be coined. GPS had yet to be introduced to smartphones. MacBooks were plastic, the best-selling iPod had a click wheel, and the iPad was but an unnamed glimmer in Steve Jobs’ eye. 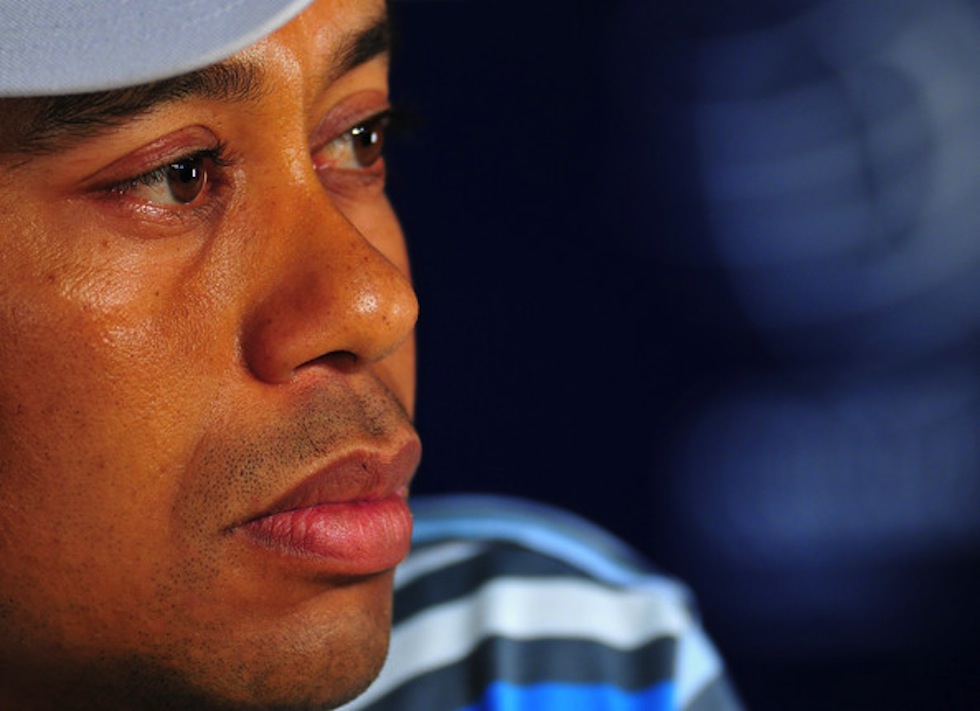 “Windows” meant Windows Vista. Android had yet to be launched. The Blackberry was king, and was practically synonymous with “cell phone” in business circles.

Massive HDTVs now cost nothing, and 3D era has come and gone. Blu-Ray won … sort of. Twitter went from Aston Kutcher by himself opining to dead air to impacting elections and uprisings. A movie was made about Facebook. More people watched it than have ever spent meaningful time on Google+.

Every men’s tennis Grand Slam event except one has been won by Rafael Nadal, Roger Federer, Novak Djokovic, or Andy Murray.

Baseball has seen remnants of the steroid era pop up, first as declining home run totals, second as prosecutions and lawsuits involving some of the game’s best players. Football is in the early stages of either its downfall or renaissance due to mounting concussions. Lance Armstrong attempted a comeback at the 2009 Tour de France, and eventually admitted to repeated steroid usage in 2013. 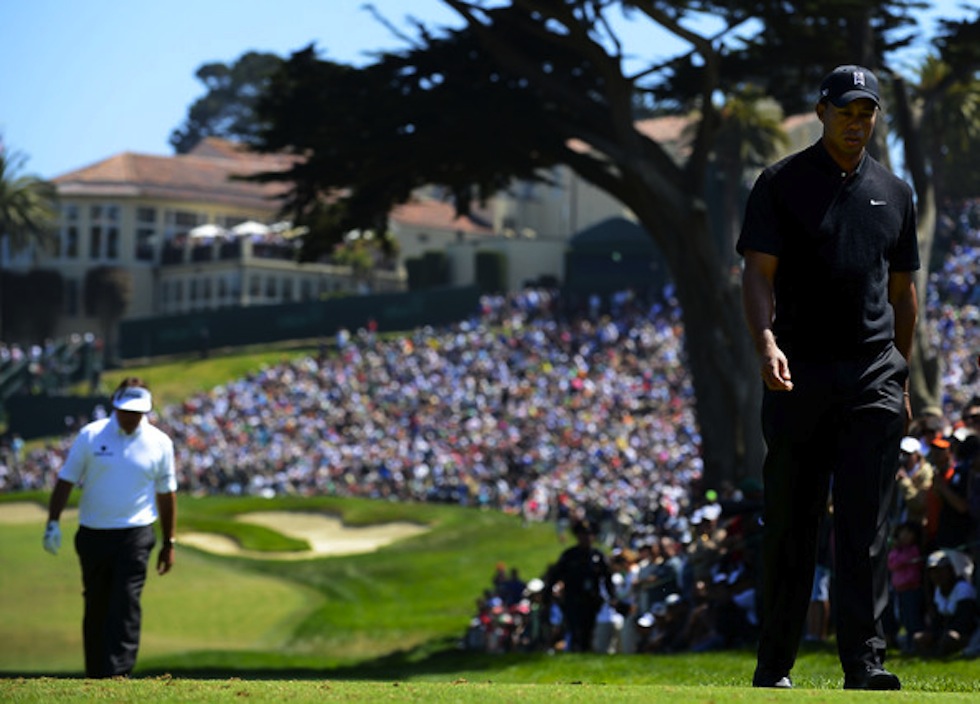 Since Tiger’s U.S. Open win, Paddy Harrington has won two of his three major championships. Rory McIlroy chocked several away, broke through with two wins going away, and then went back to just stinking. Martin Kaymer won a major, ascended to number one in the world, and faded into obscurity. Luke Donald and Lee Westwood similarly reached the peak of the world rankings, but remain majorless. A pair of lefties hit Sunday shots out of the pinestraw at Augusta to win the Masters. Adam Scott, formerly a strong Greatest To Have Never Won a Major contender, broke through with a Masters win, while Sergio Garcia’s redemption has been less kind. Both Tom Watson and Greg Norman threatened to another Open Championship to their records, while Ernie Els and Darren Clarke actually sealed the deal. Y.E. Yang broke Tiger’s streak of converting 54-hole leads into major victories. Grooves have been rolled back, and anchored putters will soon become a thing of the past (but only after several majors were one with anchored putters).

Oh yeah, and Tiger Woods became embroiled in an infidelity scandal so damaging that he lost nearly every sponsor, checked himself into sex addiction rehab, took three months away from golf, gave away upwards of $100 million in a divorce settlement, grew the world’s most terrible goatee, and moved into a house with its own driving range and short game area. Well, that last one doesn’t sound so bad.

So how have your last five and a half years been?