We preview the biggest stories going into The Masters.

As the first major of the year, The Masters is the year’s earliest test of the state of golf. A birdie-fest win at the tournament-formerly-known-as-the Bob Hope is one thing, but playing well at Augusta is another story entirely, and this year has been loaded full of weighty stories. Luke Donald began the year at the top spot in the world, but a resurgent Rory McIlroy quickly stole that away. Despite the young Ulsterman’s finishes of second, first, and third on the PGA Tour early on, Donald was able to take back the number one ranking with a victory at Innisbrook.

Equally impressive has been the play of numerous Americans, veterans and young-guns. Steve Stricker started off the year with a win at Kapalua, and he was followed by a crop of young players including Brandt Snedeker, Kyle Stanley, John Huh, and Hunter Mahan.

Phil Mickelson also picked up an early-season win at Pebble, and most recently Tiger Woods returned to the winner’s circle, triumphing at Bay Hill for the seventh time. He’ll have to put aside all of he talk about hank Haney’s tell-all is he wants to win his fifth green jacket.

Number Five: Phil Mickelson
Short of Tiger Woods, no one in the current era of golf has a better Masters record than Phil Mickelson. Aside from his wins in 2004, 2006, and 2010, Phil has only finished outside the top-ten at Augusta four times since his DNP in 1994. He was cut in 1997, finished T12 in 1998, was T24 in 1997, and last year he was T27 (while battling arthritis). The rest of the time he has been stellar though, and Phil will be a threat to win at Augusta until the day he hangs it up for good. 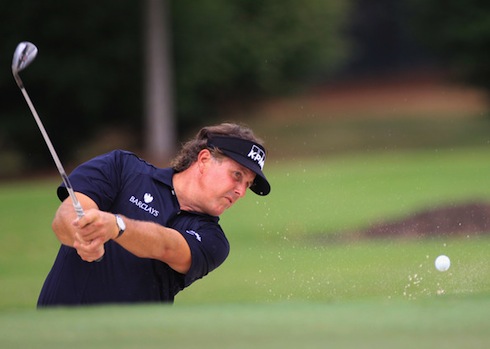 Probably because of his condensed schedule, Mickelson had an odd record in the majors last year. In addition to his three Masters championships, Phil also has a PGA win and one of the best U.S. Open records for anyone who has never won our nation’s championship, but Phil has rarely contended at the British, with just one top-ten and three missed cuts going into last year. At Royal St. George’s last July, with four-time winner Tiger Woods on the mend, Phil started out with two decent rounds of 70 and 69, putting him at one under par going into the weekend.

Phil dropped a stroke on Saturday, and was T7 at even par at the start of the final round. Despite shooting two under on Sunday, Phil finished three shots back of winner Darren Clarke, who brought home his first major. Phil, who has done everything from changing his practice schedule to playing the week before the British to simply going over and treating it an just another event, played surprisingly well in the rain and the wind. Add to that the fact that this year he’s already won one event and lost another in a playoff, both at familiar courses, and Phil’s Masters chances are looking pretty good.

Number Four: Luke Donald
Though his success is mostly recent, Luke Donald has been playing the Masters for a while now. His first Masters appearance was in 2005, when Tiger and Chris DiMarco settled the tournament in a playoff. Donald played well, and tied with Retief Goosen for third, but still finished seven strokes back. Luke actually would have had a chance on Sunday had be played just average on Friday, but his second-round 77 made it tough for him to content in ernest. Two years later Donald finished T7, in a year no one broke par, and last year Donald made his return to the Augusta top-ten. After starting off slow, Donald shot a 68 on Friday and carded two 69s on the weekend to finish at T4. Trying to become the first played to win the Masters after winning the par-three contest, Donald came down the stretch on Sunday near the lead, but even a chip-in on the 18th hole couldn’t seal him the victory. 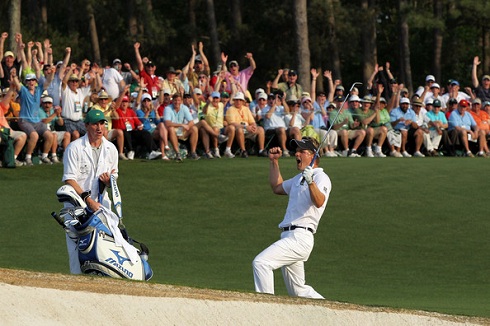 On the PGA Tour last year Luke Donald won early, at the WGC Match Play, and late, at the Children’s Miracle Network Classic. Over the year, Donald missed the top-ten five times in 19 events on the PGA Tour and he continued that success on the European Tour, where he won the Barclays Scottish Open and the BMW PGA Championship. So far this year Donald has one victory, at the Transitions Championship, and is currently atop the Official World Golf Rankings.

Number Three: Rory McIlroy
We all saw Rory’s Masters collapse last year. McIlroy got off to a hot start, shooting a 65 to lead after Thursday, and he maintained that lead through the front nine of the final round. McIlroy hooked a driver into a backyard on 10, and by the time he was in with a triple, Rory was pretty much out of the tournament. A bogey on 11 and four putts on the 12th problem compounded his earlier mistakes, and he was already cooked by the time he hooked his drive on 13 into Rae’s Creek. 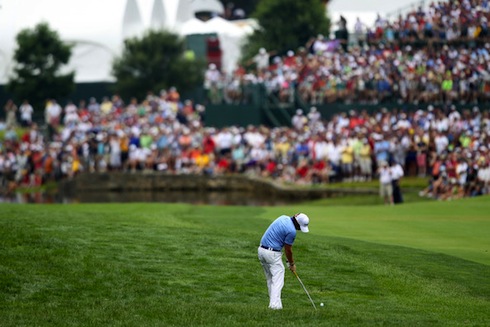 That wasn’t Rory’s first brush with major winning. In addition to T3 finishes at the PGA Championship in 2009 and 2010, Rory was the first-round leader at the 2010 British Open at St. Andrews. He shot an 80 on Friday, and was only able to rally back into a tie for third.

After his Masters collapse last year Rory put the epic flop behind him, and recorded one of the most convincing U.S. Open wins in history. Late in 2011 he won the UBS Hong Kong Open (co-sanctioned between the European and Asian Tours), and he’s been on fire on 2012. Starting with a runner-up finish at the WGC Match Play, Rory held off Tiger’s final-round 62 at the Honda and finished third at Doral.

Number Two: Hank Haney
As most people know by now, Tiger’s former coach Hank Haney has released a book describing their relationship and Tiger’s quest for 19 major championships. The book, released on March 27th, has come under fire. Judging by excerpts that were leaked to the internet, Haney was harshly criticized for the tabloid nature of the book, though that fire has died down upon the actual release of the book. 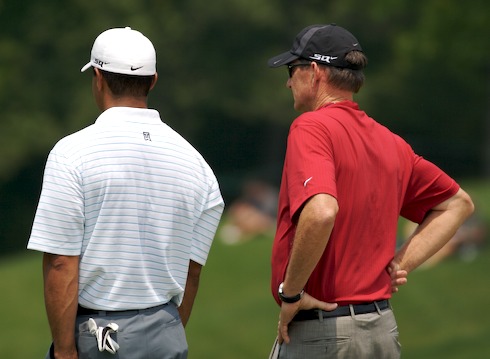 In the internet leaks, Haney focuses mostly on the superficial, including Tiger’s training schedule with the Navy SEALS (and how that may have related to Tiger’s many knew problems), a private jet-related incident between Tiger and Ian Poulter, and an ultimatum by Tiger’s ex-wife regarding his play in 2010.

Number One: Tiger Woods
What can I say about the play of Tiger Woods? He closed his 2008 season by winning the U.S. Open and having knee surgery, he wons six tournaments on the PGA Tour in 2009 but failed to record a major victory, and he recorded three top-four finishes in majors through 2010 and 2011 despite being winless. Since the last time we saw Tiger win a major he’s has a child, gotten divorced, switched swing coaches, moved across Florida, and missed the cut at three majors (while skipping another two due to injury). 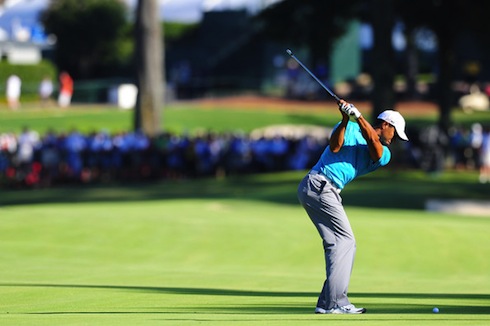 But Tiger won, convincingly, his first PGA Tour event in two and a half years at his last start, and his swing is beginning to look as good as it’s been in years. As indicated by his attitude in recent press conferences, his confidence is as high as it has been in a long time, and Tiger Woods goes into The Masters looking good in many of the most important statistical categories. Woods is first in total driving, 18th in driving distance, 18th in driving accuracy, sixth in putts gained, and seventh in greens in regulation, and he’s missed the top-eight at Augusta National just three times since he missed the cut in 1996. Yes, he has had problems closing out tournaments recently, and the Arnold Palmer Invitational was the first time in a while that Tiger has strung together four solid rounds, but if someone gave you the above statistics in 2007, would you have picked against him?

Closing and Your Thoughts?
For what seems like the first time in a while, pre-Masters talk this year has been focused much less about the ever-changing nature of the course and more on the actual golf. This year’s tournament will feature one of the fiercest crop of players, young and veteran, almost all of whom have a chance to win. That said, there are four players that no one wants to bet against, and it’s those guys that make this one of the most anticipated Masters in a long time.

2 thoughts on “The Five Most Important Stories Going into Augusta”