Sun Mountain introduces the next generation push cart with an innovative folding mechanism and smallest folded size on the market. 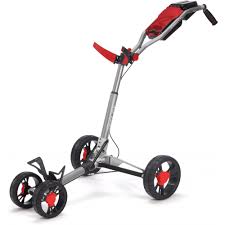 Sun Mountain has redesigned the Micro Cart with the next generation Reflex push cart. The Reflex has a new folding mechanism, a wider base when open, and folds up very small for easy storage in your car trunk. The dual strut design of the Micro Cart has been replaced with a single strut design for easier folding. Other additions are a second accessory compartment and adjustable handles.

This review will take the Sun Mountain Reflex Push Cart for a test drive and see how this next generation of push-cart from Sun Mountain compares to its predecessor and its competitors.

NASA’s Opportunity Mars Rover just passed a milestone. It has completed the first marathon on Martian soil! What does this have to do with a golf push cart? Opportunity is a technological improvement over previous models. Viking, the first lander on Mars, was a big bulky 1973 Chevy Conversion Van compared to Opportunity. NASA made Opportunity smaller, faster and better, which is why it has lasted so long. 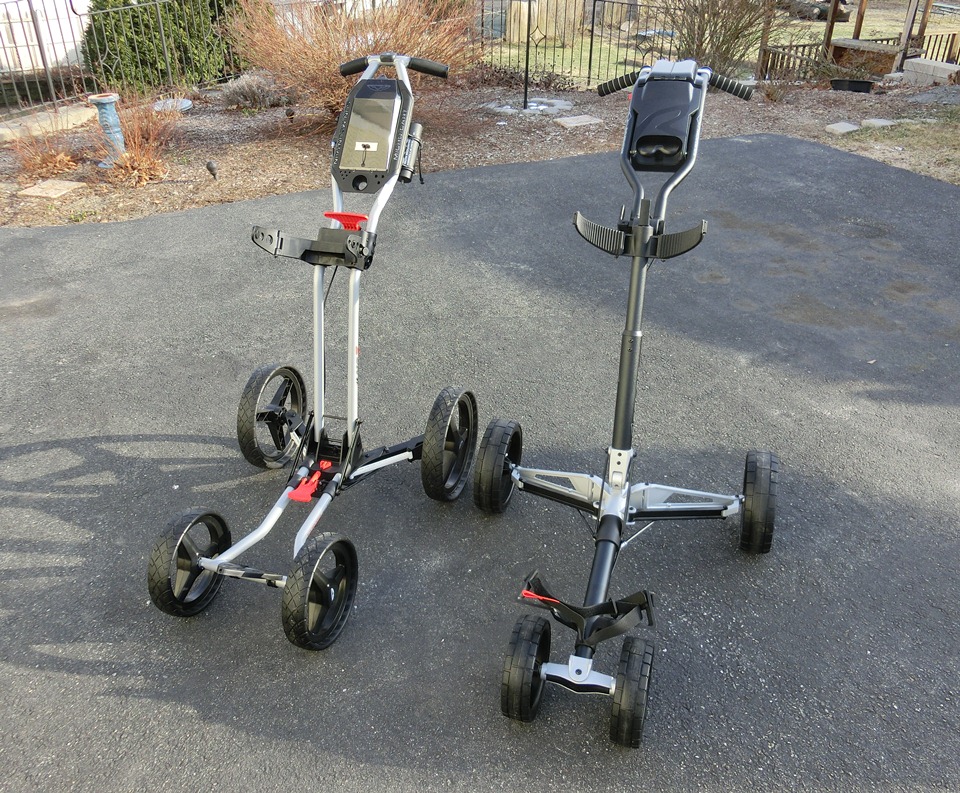 The same goes for push carts. The first pull carts or trolleys, as they are sometimes called, were bulky welded steel frames with big rubber wheels. When you pulled them, they squeaked and squealed, the wheels would wobble and your bag would constantly spin. Eventually better pull carts were made out of lighter steel or aluminum and added some features like folding, a score card clip, and ball storage. Then came the push cart revolution. Push carts are more stable and easier to move around, and stressed the shoulders and joints of the golfer less.

No longer just the realm of senior golfers, push carts help you navigate the course, carry your supplies and save your back for the end of the round. But there has always been the problem of whether the cart would fit into your car trunk. Folding pull carts can get narrow, but tend to be long. Three wheeled push carts can fold up, but their footprint is still large. The Sun Mountain Speed cart is 37″ x 16″ x 13″ for example. 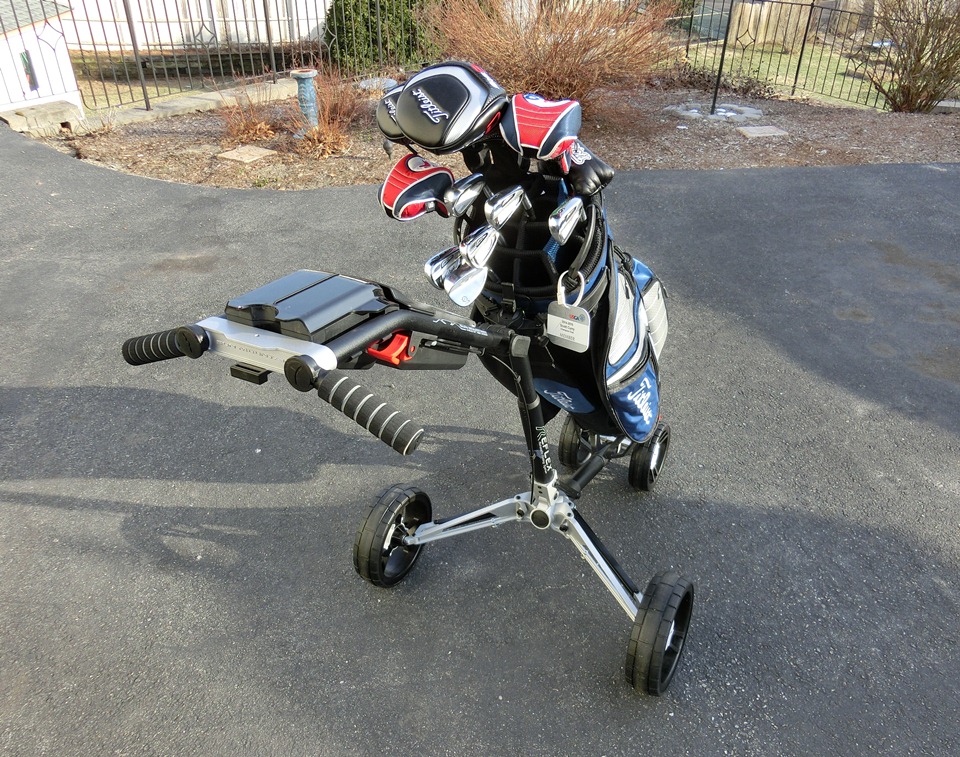 Sun Mountain came up with the Micro cart to solve the storage issue. The Micro cart folded to a relatively small 25″ x 16″ x 12″. The next generation MC3 Micro Cart (on the left above) added larger wheels for more stability, but the size got bigger, 27″ x 15″ x 14″. Sun Mountain designers wanted the best of both worlds, more stability and smaller folded size. They achieved this by changing the frame from a two strut design to a single strut. This allowed them to increase the rear wheel base width by 3″ and front to back length by 1.5″ thereby increasing stability and fold smaller, 25″ x 15″ x 11″. The Reflex is on the left below. Pretty small, eh? 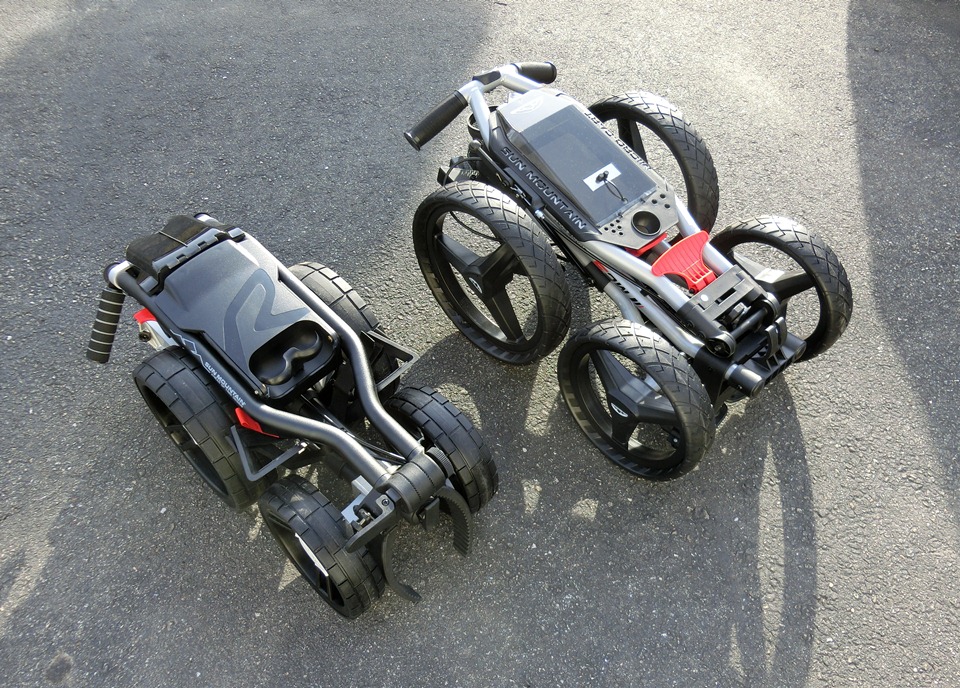 The small folded size allows the Reflex to easily fit in any trunk. Below is a picture of the Reflex in my Jeep. It also fits in my son’s Ford Focus with his bag and all that other stuff he seems to need in there. 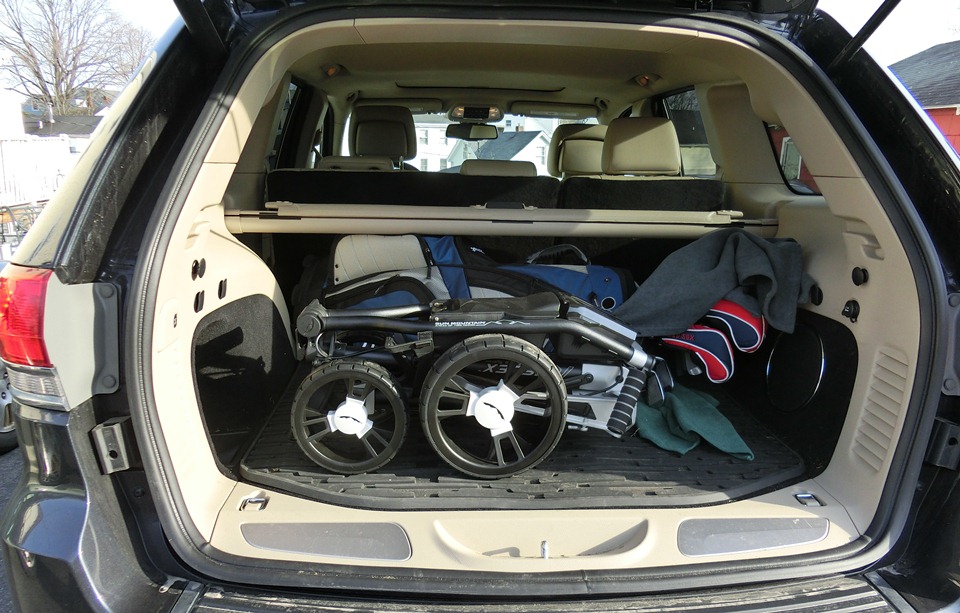 For the Reflex, Sun Mountain added an extra storage compartment in the handle and kept the cup and umbrella holder. They replaced the magnetic scorecard holder with an elastic hold-down on the top storage compartment. The handle is a few inches longer as well. However, they removed the external storage feature for the umbrella holder. This appears to be done to allow the cart to fold smaller. The cup holder fits in the top compartment and the umbrella holder, the bottom. The red lever on the side of the handle, in the picture a few paragraphs below, is the brake.

Because of the cart base width and low center of gravity, an umbrella will sit nicely in the holder without the cart tipping. This means no excuses for not golfing on rainy days! 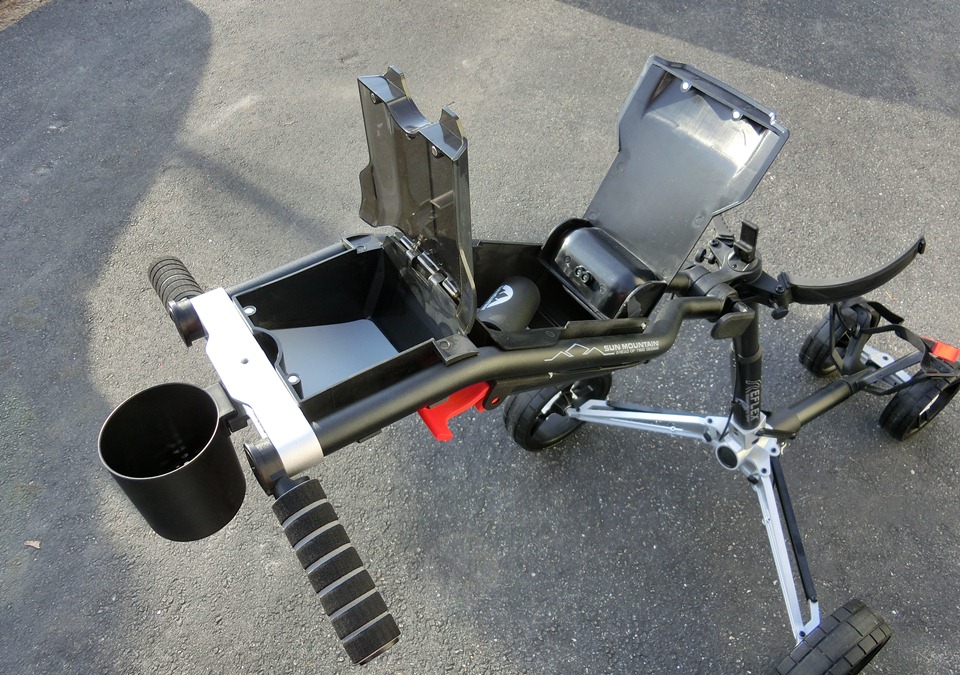 The red lever on the side is the parking brake.

Sun Mountain also added a bag strap to the cart. This is new. The strap can be mounted on the lower or upper section. I used it on the lower. It keeps the bag from bouncing in the lower section, which is a nice addition.

On to the course!

So how does this baby drive? The miserable New England winter is over, so I took the Reflex out for a few rides at my city’s muni. Unfolding the cart is easy. You flip the EZ Latch lever on the forward side of the cart and pull up. The bottom section opens up, the wheels unfold and the vertical strut extends. Then you adjust the handle arm to the desired height using another lever. Lastly, you pull the handles toward you and adjust their angle to your desired location. Snap the cup holder on and you are ready to go. The whole process takes just a few seconds. 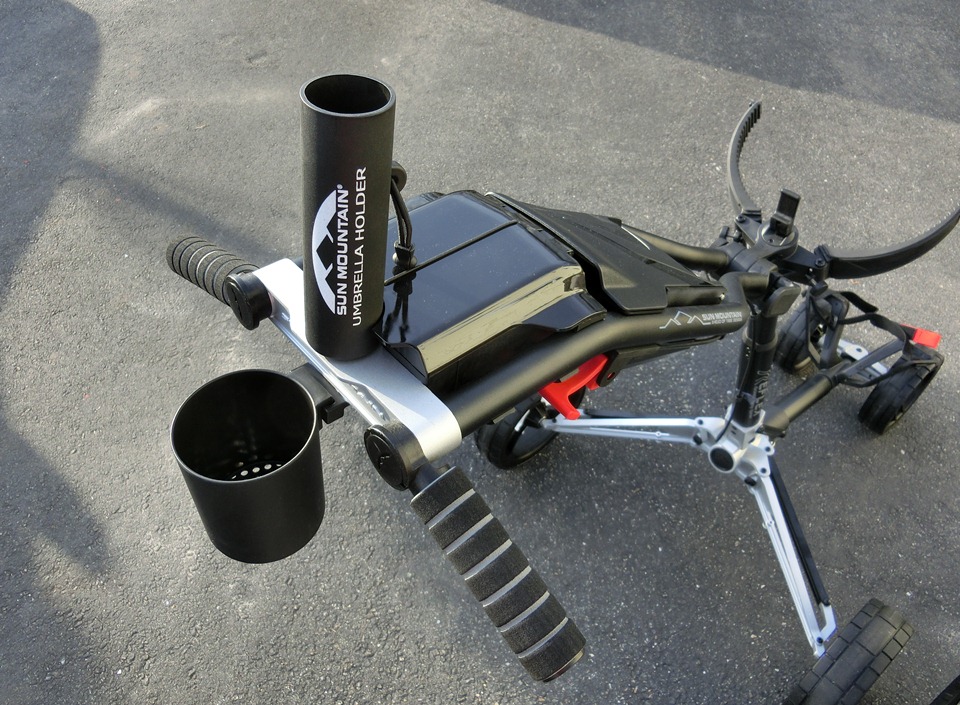 My city course is not too hilly, but there are some steep sections. Fully loaded, the cart moves with ease over the bumpy terrain. The brakes worked great on even steep slopes. Sun Mountain changed the brakes from the rear wheel on the Micro cart, to the front wheels on the Reflex. I would recommend you turn the cart into the hill in case you forget to set the brake lever. We’ve all seen that rogue cart rolling down the fairway with some older gentleman chasing after it, all out of breath and embarrassed. You don’t want to be that guy!

I didn’t notice any real difference in rolling resistance with the smaller rear wheels as compared to the MC3 Micro Cart. The base is a few inches wider than the Micro cart, which increases stability on side slopes.

The folding handles are a nice feature. The top section itself is adjustable to any height so it will work for short and tall players. Turning the cart is easy too, and the cart is balanced nicely. You can lift the front wheels easily to get over curbs. The front wheels have an alignment adjustment. If the cart ever has trouble rolling straight, you tighten and loosen two Allen bolts on the front axle with an Allen key provided by Sun Mountain. Turn left or right depending on which direction you want to adjust. This is an excellent feature that I wish shopping carts had. 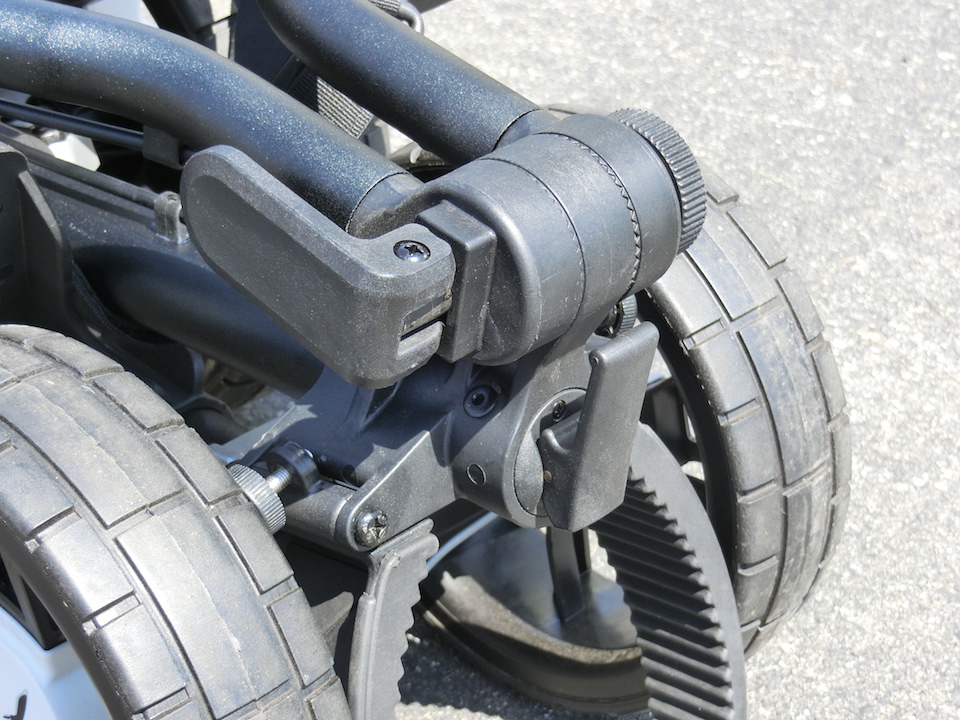 The top lever adjusts handle height. The bottom lever is the EZ Latch.

If there was one negative, I would say it is the cup holder. Because the holder is rigid, water bottles bounce around a lot. I had to hold the bottle while I walked so it wouldn’t bounce out. The previous holder was also the latch and rotated on the handle. It wasn’t perfect, but better. Because the cup holder is at the end of the handle strut, it is going to bounce regardless. This is not a big issue, but it can annoy. It could also be resolved somewhat by adding something like rubber flaps to better secure the water bottle. 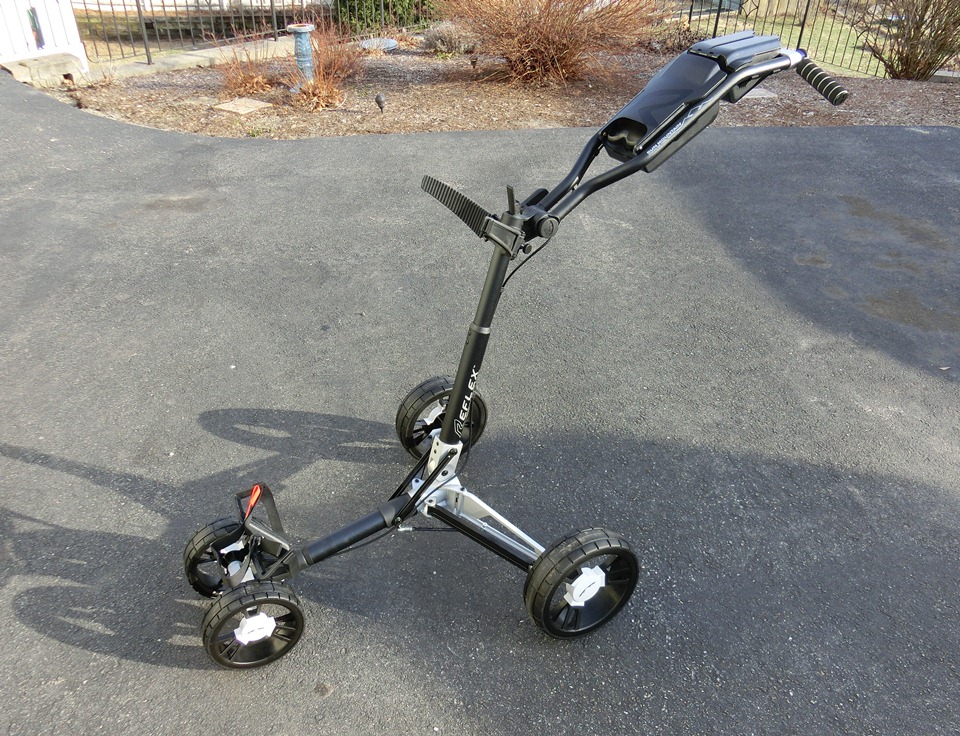 Folding the cart up is as easy as unfolding. First, lock the brake, pull the handles out and rotate them in to 30 degrees. Release the handle lever and then lower the handle. Fold the top strut down, which will retract the wheels. After the cart is fully folded, flip the EZ Latch lever down. This will keep the cart from opening when you lift it.

The Reflex retails for $259.99 and comes in four color combinations, silver, black-lime, black (pictured above), and charcoal-red. The cart weighs 17 pounds. This may sound like a lot, but you don’t notice it. The weight and low center of gravity increase stability. The cart rolls so well, weight is not an issue. 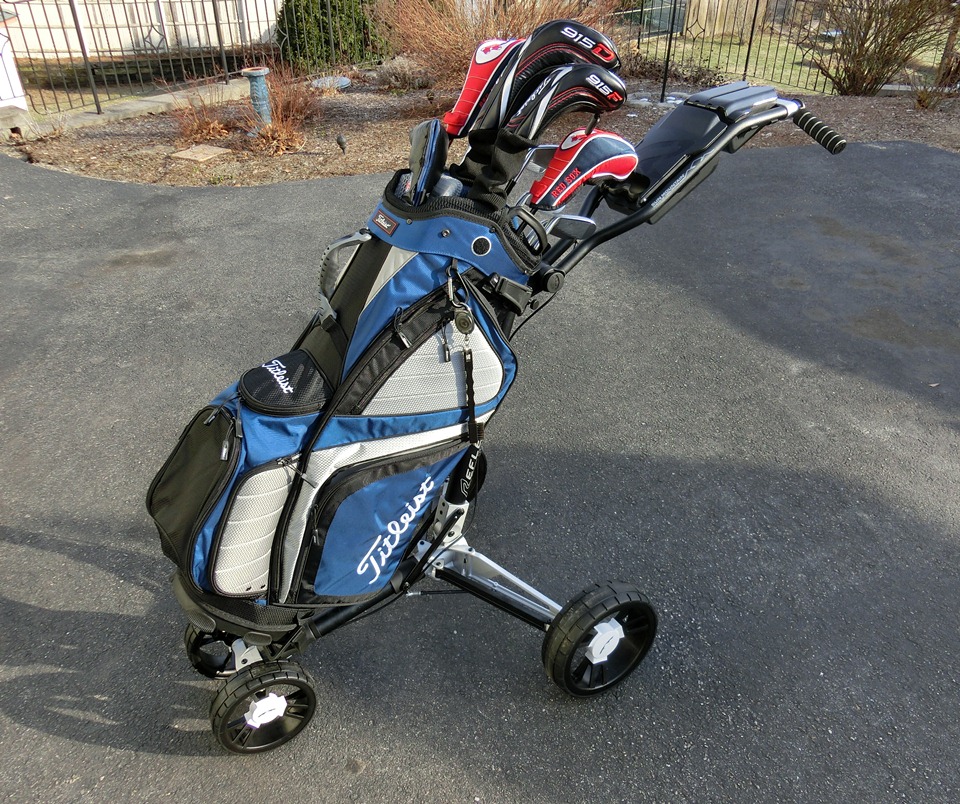 Conclusion
This is a great new addition to the Sun Mountain line. It may not be able to transverse the Martian landscape under its own power, but would make a great golf cart for the first Martian Open. Sun Mountain continues to innovate and improve their products and the Reflex shows this. The designers of Opportunity would be proud!