In February, Callaway will release their new XR Product Family; a line that they say is built for speed.

While the Big Bertha line is undoubtedly the most popular line of clubs that Callaway Golf has ever created, the X Hot line, which first came out in 2013, has seen it’s fair share of love from golf fans. If you remember, it was that line that promised to add a whopping 17 yards of distance to your fairway woods, and for a lot of people, that’s exactly what they got. While the awkwardly named sequel to the X Hot Line, the X2 Hot didn’t seem to take off quite as well, those were still solid clubs that took a step forward from the original. Soon to be released now from the company is the successor to the X2 Hot, the XR. Like the line it is succeeding, the XR is a complete product line featuring multiple drivers, fairway woods, hybrids and a couple sets of irons. Read on to get all the details. 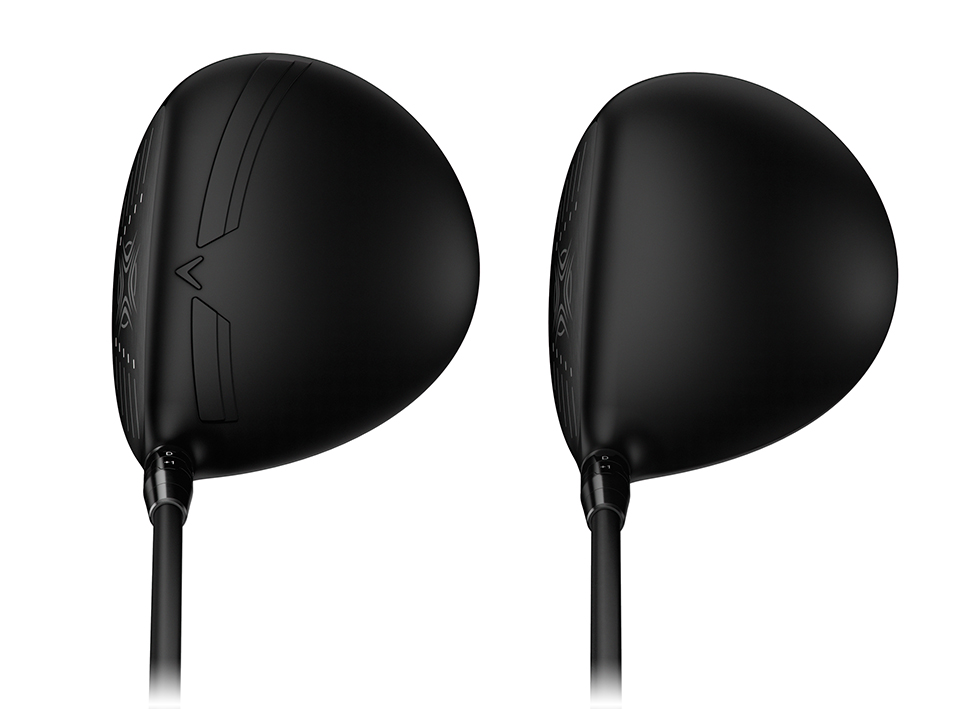 Like the X Hot line of clubs that it follows, the XR product family features two drivers; there is the standard XR Driver as well as the XR Pro. Callaway likes to give each of their products a one-liner; for the XR Driver it is “Built for Outrageous Speed,” and for the XR Pro it’s “Low spin and outrageous speed in a players shape.” See a theme there? The focus is obviously on enabling the golfer to swing the club faster and creating a face that produces maximum ball speed as this gives the most distance. 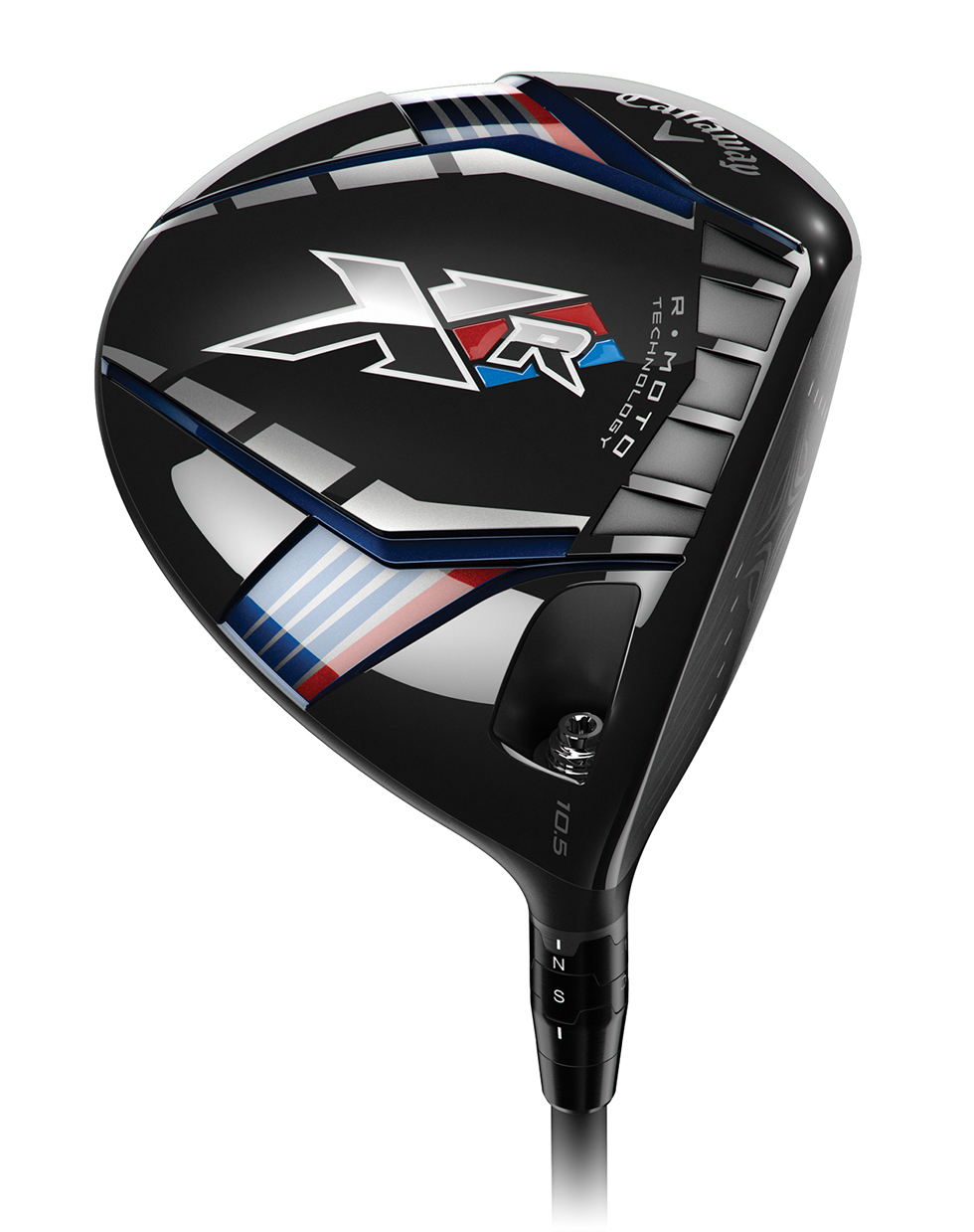 The XR Driver gets it’s speed from three key sources; the Speed Step crown, the R·MOTO Face, and maximum shaft load. The crown as been designed with a focus on aerodynamics and aero efficiency. The addition of a Speed Step Crown helps to reduce drag throughout the swing. To increase ball speeds across the face, the company is using it’s R·MOTO Face Technology. The face weight has been reduced by 10% creating a thinner face that transfers energy more efficiently than ever before. The CG is now 17% lower than before, leading to a higher Moment of Inertia (MOI) and more forgiveness. The last speed component is from the shaft. According to Callaway the new Project X LZ shaft that they have chosen to use as the stock shaft produces maximum shaft load during the downswing for greater energy transfer. 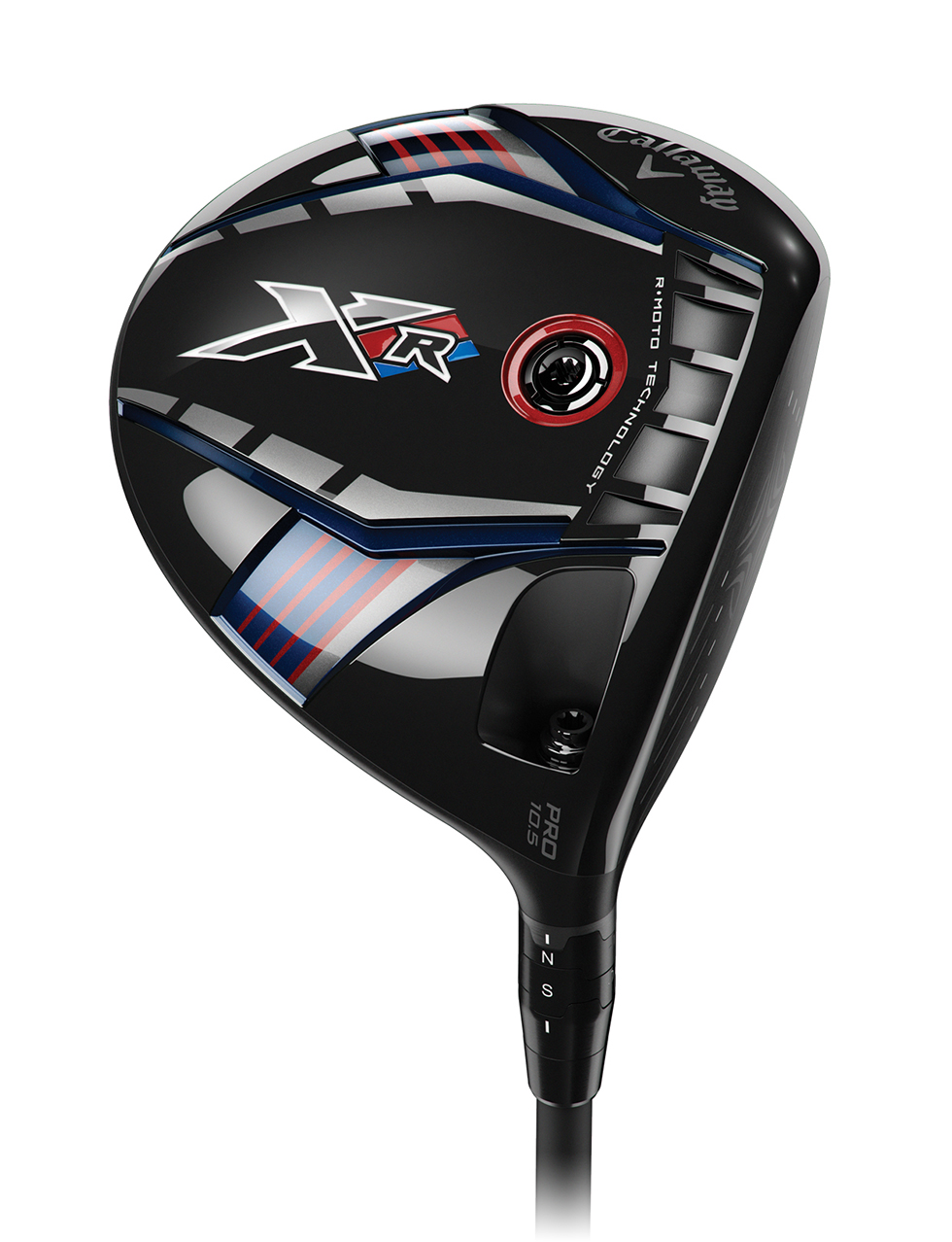 The XR Pro Driver has many of these same key features, including the use of the R·MOTO Face, an aerodynamic crown, and the same stock shaft. That being said, there are also some differences here, obviously. To start the XR Pro comes in a smaller, more compact shape, preferred by the game’s better players. The pro version of the driver also uses a forged composite crown. By going in this direction, the XR Pro has a CG that is 53% lower and spins 300 rpm less than last years X2 Hot Pro.

Both clubs use the companies OptiFit hosel which allows for 8 different loft and lie configurations. The pro model is available in starting lofts of 9° and 10.5°, while the standard version adds in 12° and 13.5°.  The standard model goes for $349 while the XR Pro is set at $399. 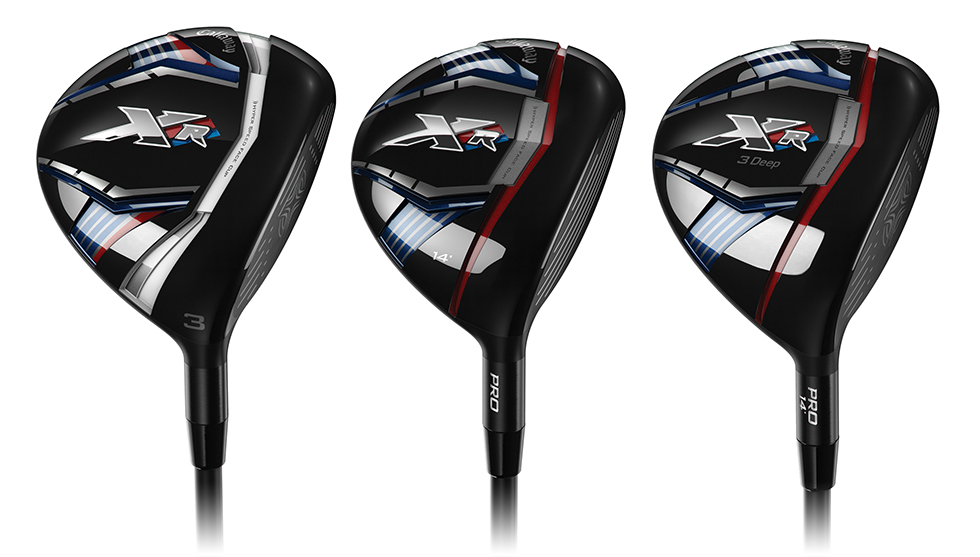 What good is a new driver though, if you don’t have the matching fairway woods? Once again, the fairway woods are coming in three different versions; standard, pro, and deep. Callaway claims to have started from scratch with the new XR fairway woods creating a lighter and thinner version of their Forged Hyper Speed Face Cup, creating a face that is 36% thinner for higher ball speeds, while at the same time creating a sweet spot that is 16% larger. The head shape has also gone an overhaul and now have flatter leading edges and a higher toe. This was done with the thought that golfers with the standard XR fairway wood use these clubs mostly from the fairway. The standard model is available in 15°, 17°, 19°, 21°, 23°, and 25° and will sell for $229.

The XR Pro fairway wood is obviously aimed at a different group of golfers. Compared to the standard version, the face is deeper making the club more playable off the tee. The CG of the club combined with the sloping crown also makes it easier to shape the ball compared to last years X2 Hot Pro. While the comparatively deeper face of the XR Pro makes it easier to use of the tee, the XR Deep was designed specifically for that purpose. Like the XR Fairway wood, both the Pro and Deep versions feature the same next generation Forged Hyper Speed Face Cup. All three versions of the fairway woods also follow suit with the driver and employ the Project X LZ as the stock shaft. The XR Deep is only available with a 14° head, while the XR Pro adds 16° and 18°. The price on both is $239. 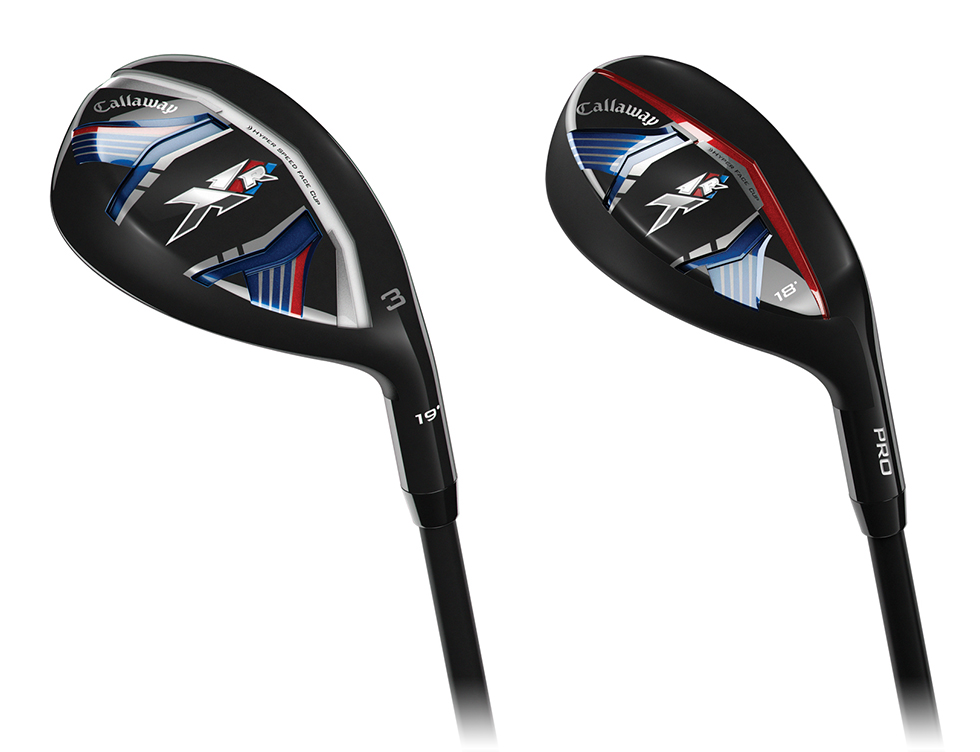 The XR Hybrids and Irons also feature standard and Pro models. There were two main focuses with both models of the hybrids. The first was to increase ball speeds for greater distance with was achieved through the use of the Forged Hyper Speed Face Cup. The second was to increase forgiveness and launch. The Pro and standard versions both feature a completely redesigned head shape that creates a higher MOI and a lower CG, and in the case of the XR Pro Hybrid, the lowest CG they’ve ever put in a hybrid. Pricing is $219 for the XR Hybrid and $229 for the XR Pro. 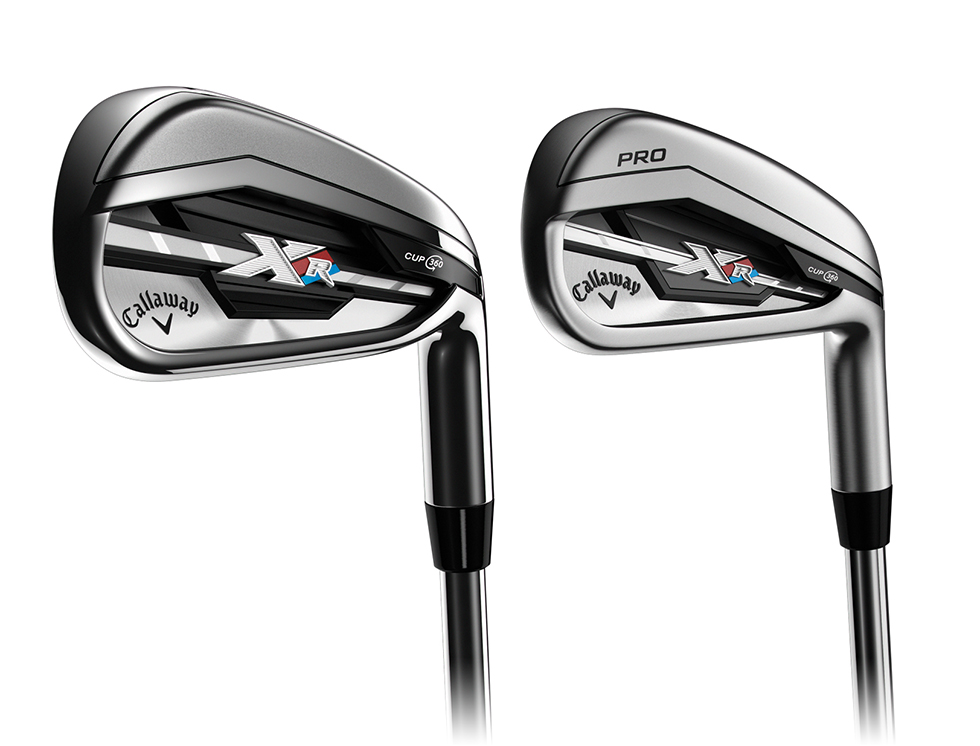 Rounding out the XR product family are the XR and XR Pro Irons. Callaway is billing the XR irons as the first high speed, cavity back, cup-faced iron. Like the rest of the lineup, the focus on the irons is first and foremost on speed. The company says that they’ve taken their Cup 360 that has made their fairway woods so successful and added it to the irons. The new irons also have an even lower center of gravity and increased MOI making them easier to launch and more forgiving than ever before. The XR irons are constructed using a new 2 piece construction that includes a dual heat treatment. 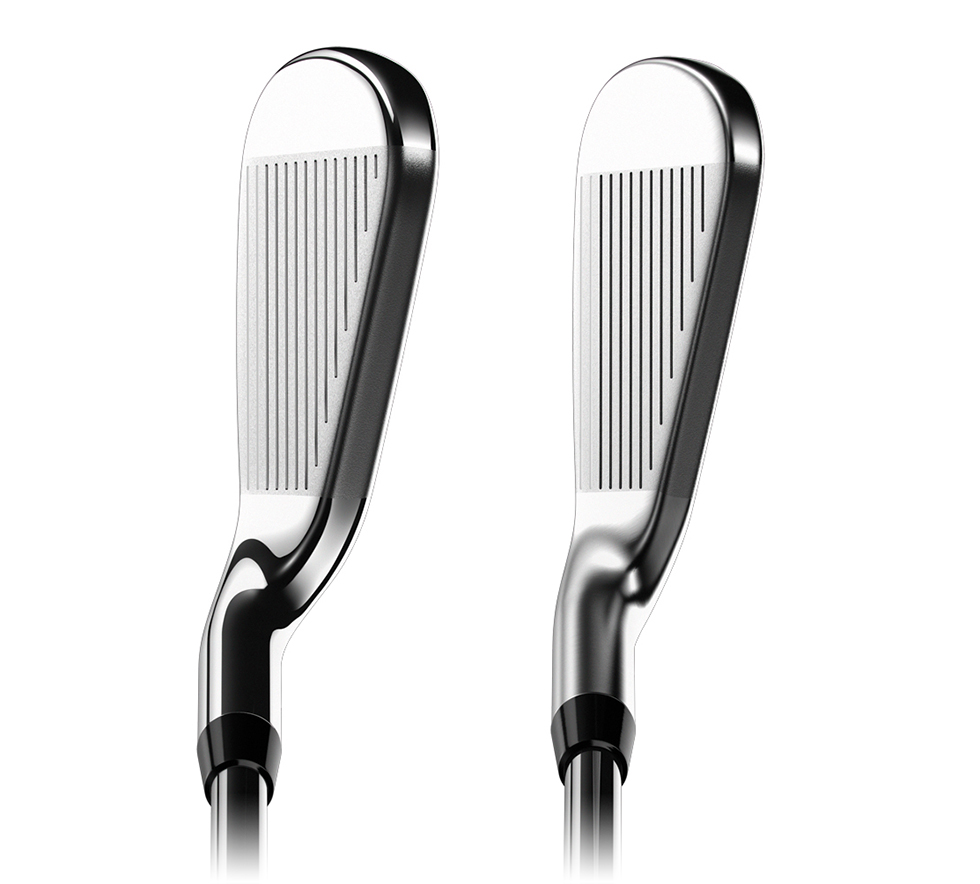 The XR Pro Irons incorporate many of the same ideas, but in a more compact shape. According to Callaway, the improved face cup technology acts like a spring on shots hit low on the face to increase ball speeds. It’s not just those shots hit low on the face that see benefits however, as speed is higher at every other impact location as well. Compared to the XR irons, the XR Pro irons have a thinner top line and narrow sole. They also feature the 2 piece construction using a dual heat treatment. The XR irons are available in steel or graphite for $799 or $899 while the XR Pro is only available in steel and cost $899.

The entire product family will be released on February 20, 2015.