There’s no other golf ball like the Caesar. Find out why in this review. 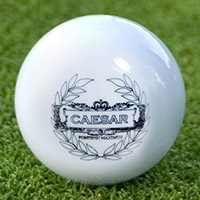 A baseball pitcher can make the ball curve because the stitched seams disrupt an otherwise smooth surface. The seams “grip” the air when the baseball is in flight and can cause the ball to curve, dip, rise, and dive on its way to the plate, frustrating batters.

The golf ball’s equivalent of seams are dimples. Every reasonably well-struck shot in golf has backspin, and backspin creates aerodynamic lift, which keeps a golf ball climbing in the air well beyond what would be its maximum height without the aid of lift. The dimples, like the seams of a baseball, provide a little “grip.”

Of course, the downside is that the same is true in the horizontal direction as well: any sidespin applied to the golf ball will result in the dimples “gripping” the air and turning the ball to the left or right. Good players can play draws and fades, but bad players are plagued by hooks and slices.

The folks at Caesar Golf Company have eliminated the problems of hooks and slices by – get this – eliminating the dimples. Their ball, the Caesar “Featherie,” is round like a pool ball. Unfortunately, eliminating hooks and slices also eliminates the aerodynamic lift, so the Featheries are also a shorter golf ball.

We played several rounds with the Featherie. Read on to see if we feel the tradeoff is worth it.

Purpose
The dimples on a golf ball aren’t just decoration: due to backspin, they provide lift. This lift greatly prolongs the amount of time a golf ball spends in the air for increased distance. The stated purpose of the Featherie is to straighten shots that would otherwise hook or slice:

Caesar Golf Company has introduced a revolutionary new ball that helps golfers consistently hit straight shots. It has no dimples. The smooth surface on the Featherie eliminates hooks and slices.

Designed for Par 3 or 4 courses, private resort and executive courses, Caesar Golf’s new smooth surface ball gives golfers more control. It hits well off the tee with a high lofting wood or hybrid. It’s great for golfers with a slower swing. On a dog leg, it will keep the golfer out of the rough.

That’s it in a nutshell: without the dimples, the Featherie can’t “grab” the air. If the ball can’t grab the air, it can’t slice. It can’t hook. But again, it also can’t fly very far because it will come down as quickly as it goes up.

On the Course
Though I generally play the Black tees (6750 yards or so) at one of my two home courses, I occasionally wander up to the white or even red tees just for the heck of it. They offer a unique look at the course and help to stave off the boredom that occasionally comes with playing the same course week in and week out.

Since my region lacks a true executive course with par threes and short par fours, I figured I might just play my home course from the red tees to create a sort of executive course in order to test the Featherie. I was looking forward to it. 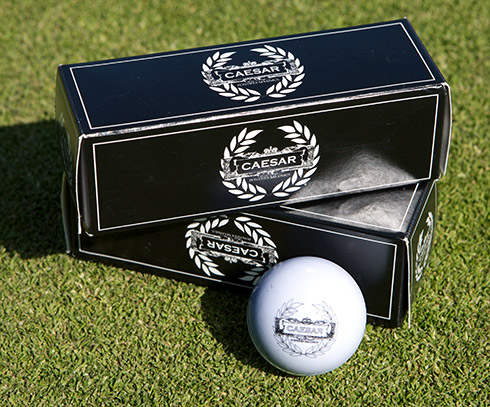 The Featherie comes packaged in a simple box. Just like the ball itself, the box simply has the “Caesar” logo.

Unfortunately, at 5500 yards, I wasn’t able to shorten the course enough for the Featherie to be effectively used. Though the longest par five measured only 448 yards (and the course plays to a par of 73 from the red tees), the Featherie simply isn’t long enough to compete. Some of the par threes were unreachable, particularly one over water, and others still were reachable only with a driver hit intentionally high in the air.

The problem is simply one of lift, or the Featherie’s lack thereof. If you think back to your basic physics classes in high school or college, you’ll remember that ideal projectiles followed a parabolic path. They spend as much time going up as they do going down. What most surprised me about hitting the Featherie was how little time the average golf ball spends going “up” on its own and how much it relies on lift to stay airborne.

In truth, you’ll be lucky to carry the Featherie 140 to 150 yards, and your ball flight will look something like this:

The Featherie will fall out of the sky incredibly quickly and will achieve anywhere from 30% to 80% of a club’s normal distance.

It’s tough to describe the feeling of looking up from a well struck drive just in time to see your ball diving downwards as if you’d just hit a cross-court topspin forehand at Wimbledon. Though it’s physically impossible to impart topspin to the ball on a shot that’s not topped, we’re so accustomed to seeing the ball carried by lift that the Featherie appears to be diving to the ground. Hard. The projectile physics equations will tell you that, even without air resistance, the peak height is around 50 feet. Normal drives fly about three to four times as high.

If you’re familiar with simple projectile physics, you’ll recognize that 45 degrees is considered the optimal launch angle at any given speed. This explains why the company urges you to hit the ball with a high lofted fairway wood or hybrid from the tee – you need to hit the ball high so that it will carry as far as possible. Your driver really won’t cut it.

In practice, this is true to some extent. I could carry a 7-iron with the Featherie almost as far as I could hit the ball with a driver. My pitching wedge also went nearly as far and the ball flight was almost identical to that of a regular golf ball, which is another way of saying at least the ball stayed in the air long enough for you to see it in your follow-through.

The sad truth for the Featherie is that, due to the shorter shafts, the closer you get to the ideal loft, the shorter the shaft and thus the lower the swing speed. A driver with the loft of a pitching wedge may be the ideal club if you wanted to maximize distance. In fact, an entire set of clubs with 45° of loft, but with varying length shafts, may be necessary to properly play this golf ball because distances are not evenly affected. Your pitching wedge will often fly farther than your 5-iron. The 5-iron will roll a lot more, but we can’t play golf with what effectively makes every club beneath the 8-iron a strange sort of putter, rolling the ball a significant portion of the distance.

What’s worse, better players de-loft their clubfaces, and spin is again an important component. A pitching wedge in the hands of a PGA Tour pro is de-lofted eight to ten degrees, and the lift from spin accounts for perhaps 35% of the distance even with a club with the “near-ideal” loft of 45°. With the driver, the distance loss is anywhere between 40 to 70% depending on your launch conditions.

To make matters worse, the ball is also quite hard. This results in near-miraculous durability. I hit several shots with new wedges (and fresh, sharp grooves). I bounced a few off cart paths and trees. I smacked drivers, long irons, and other clubs from all manner of lies. Aside from a few grass stains – which cleaned off easily – the balls barely showed a mark.

Unfortunately, this hard exterior also diminishes what little spin you’d normally get around the greens, and this is why the ball fails, in my opinion, at another of the stated goals: as a good ball for 120 yards and in during scrambles. On short pitch shots, I could watch the Caesar logo rotate as the ball spun minimally. I put a big black mark on a few Pro V1s and all I saw was a ball that appeared greyer. I would estimate that shots spun no more than half as much with the Featherie. 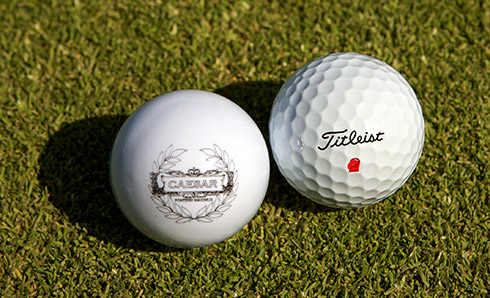 One of these balls will fly anywhere from 260 to 100 yards with a well-struck shot. The other, with the same clubs, will fly about 100 to 150 yards. Trust me: stick with the dimpled one.

You may think that spin doesn’t matter too much on short game shots, but on a punched wedge from 80 yards, a long chip shot, or a high, soft pitch, spin can matter quite a bit. Just as I don’t like to see friends of mine switching between a harder Pinnacle and the occasional “premium” ball they find because their feel and touch will suffer with the short shots, switching to the even-harder Featherie will wreak similar havoc on your game, and that’s generally not something you’d like during a scramble.

Another of the purported benefits of the Featherie is putting. The ball, due to its smooth surface, “rolls more smoothly” and “holds the line better” than its dimpled brethren, according to the makers. In my testing, I honestly couldn’t tell a difference. Maybe it’s true – maybe it’s just marketing. I could tell the difference in feel, and it wasn’t one I liked. The harder cover of the ball feels very clicky at impact. I prefer a firmer feel, but the Featherie took things too far. Additionally, if the company truly wanted to market the ball as one that’s great for putting, they might put something as simple as an alignment line on the ball. Instead, you either have to create your own with a Sharpie (which will rub off somewhat easily through normal use) or spot putt, neither of which I prefer.

As for the stated goal of eliminating hooks and slices, the Featherie does that quite nicely. It can’t (and won’t) eliminate pushes and pulls, of course, but hooks and slices were tough to come by. Making exaggerated swings with a dirty golf ball, I was able to fade and draw a Featherie a few yards. This makes the Caesar an interesting experiment in having the wrong goal. It’s like building a lean-to and calling it a house: sure, it might shelter you from a light rain, but where’s the bathroom, the electric outlets, or room for your bed or refrigerator?

In the End…
It occurred to me throughout this testing that I simply may not be the ideal candidate for this type of golf ball. I’m a lower handicap player who relies on spin not only for distance (with the driver and longer clubs), but also on short-game shots. I don’t have a hook or slice problem, and I actually like to work the golf ball. 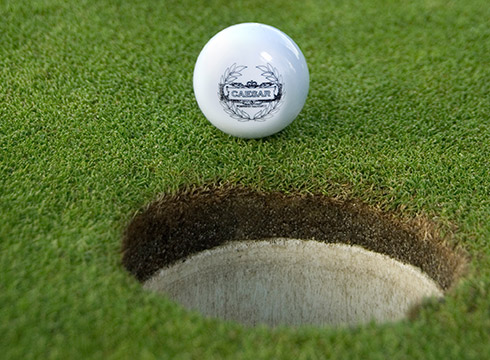 But then it quickly occurs to me that there is no ideal candidate for this golf ball.

The compressed range the golf ball flies – 100 yards or so with a pitching wedge right on up to about 150 yards with a driver – makes the ball useless as an executive course ball. The lack of a putting line makes the ball useless in putting scrambles. The Featherie simply fails at every step. For those who need the hook- or slice-reducing capabilities, I suspect none will find the distance tradeoff even close to worthwhile.

The Featherie would make a good novelty gift – it’s really quite amusing to hit a few times just to see – and perhaps (and I’m really stretching here) as a teaching tool so that you can analyze ball flight in the absence of sidespin – but not at $25 for a sleeve of three balls.

I may be completely missing the point, but I don’t think there’s one to be made.