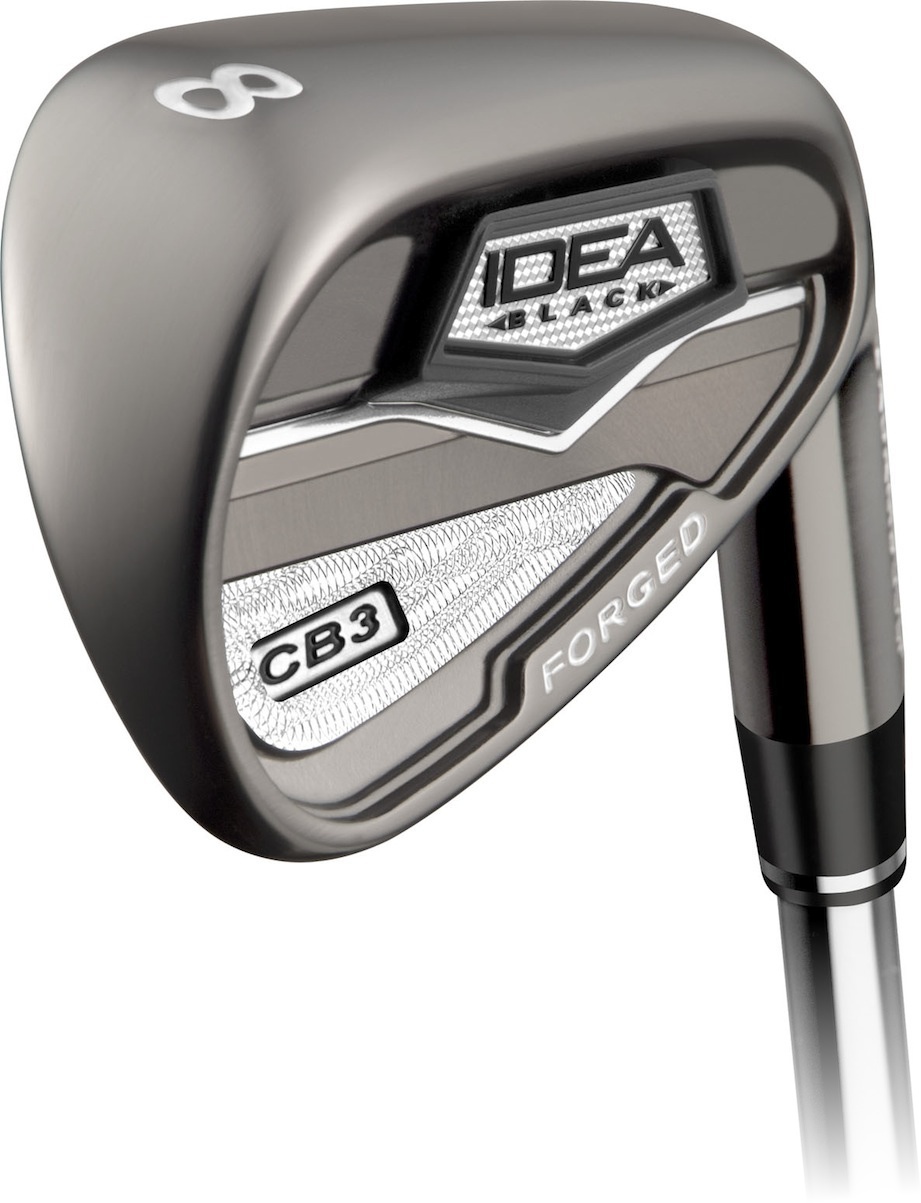 Adams Golf doesn’t really have much of identity right now. They’ve stopped airing the “number one hybrid on the Champions Tour” commercials (or maybe I’ve stopped watching Golf Channel at 2 AM?), and they don’t really have a repetitive nomenclature. They’re not revered for their huge revenues like Nike or TaylorMade, and they don’t have the rich history of Titleist or Mizuno.

I could complain about the naming of Adams’ clubs from now until Tiger Woods passes Jack’s record, but to dwell on that would be doing to complete disservice to the irons that Adams has been putting out recently. Clubs like the Idea Pro Black MB, the Idea Black CB2, and the Idea MB2 have been laying the groundwork for Adams’ venture into the crossover realm of player’s clubs and GI clubs. They’ve entered the world in between, where clubs can be forged from 8620 carbon steel yet still have the offset needed to get the ball into the air.

Design and Technology
When it comes to the design of these clubs, the name of the game is playability. They start this off with substantial perimeter weighting for forgiveness. The weighting is nicely disguised though, as the soles are not overly protrusive. 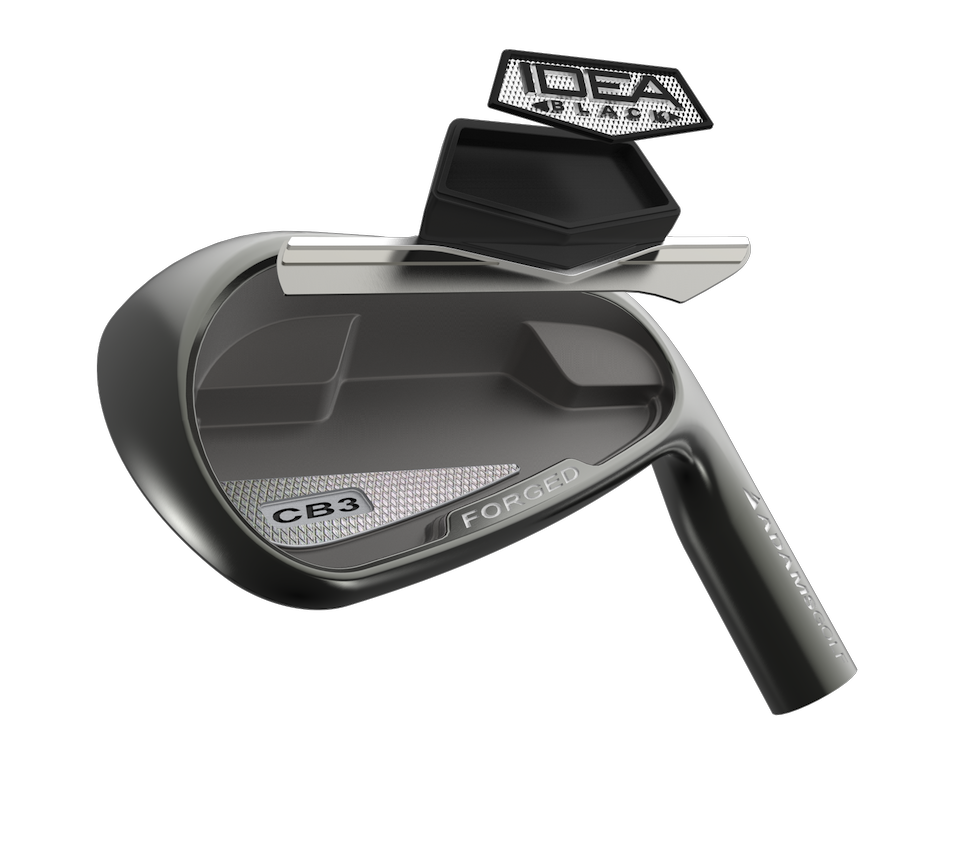 The biggest advancement that Adams is touting this year is the multi-material design integrated into the badge in the cavity. There are three levels to it: the base layer of aluminum, an ABS plastic cup to muffle low frequency vibrations, and what Adams is calling an electroform badge. The goal behind these is to create the silky smooth feel on center strikes and off-center hits alike that golfers crave.

Before the badge is applied, the club is triple milled. That is, Adams mills the forged 8620 carbon steel clubheads three times: the cavity, the face, and the grooves. The club is finished with black nichrome, and the face is bead blasted.

Adams is also advertising the fact that these clubs have increased bounce and toe/heel camber, to allow these irons to cut through the rough will still being playable from all lies.

Esthetics
Adams hasn’t deviated far from the norm with the look of these irons. With their series of Idea Pro and Idea Black irons recently, the basic formula has been “take black forged carbon steel, add perimeter weighting, mill out a cavity, and throw in some fancy-looking plastic.” That’s not a terrible formula though, and it continues to produce good-looking clubs that also have room for performance. I wish they would keep the look a bit cleaner (the Idea MB2 irons, for example, and simply stunning), but these certainly aren’t as garish as they could be, and they’re much cleaner than some of the offerings from Taylor Made and Nike. 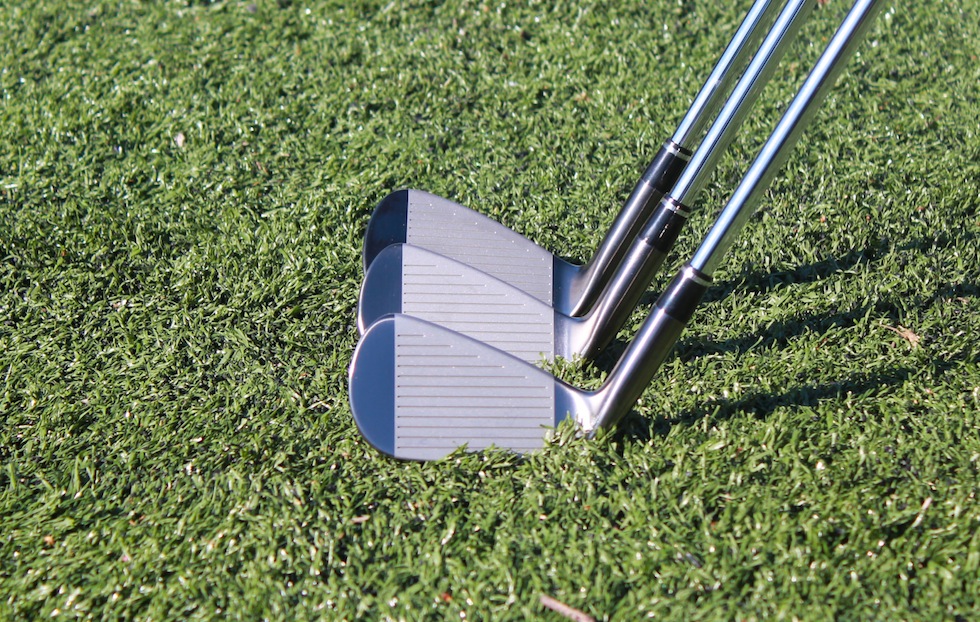 While they’re used yellow and red as accent colors in years past, Adams is sticking with simple black and silver here, a welcome choice for a set of forged irons.

The first thing I noticed when I set these clubs down is how well the black finish frames the ball. The grooves aren’t painted, but the color contrast between the face and the ball is really striking.

Though Adams has pandered to low handicappers with some features, the look at address isn’t one of those areas. These clubs have substantial top lines. Some would call that confidence-inspiring, some could call it annoying. I’m more in the annoying camp, but that’s ultimately up to you to decide.

They’re done something similar with the offset, which is not something you’d find in most forged irons. Again, this can be looked at one of two ways. Either Adams has indulged the mid handicappers by forging a mid-handicapper club, or they’ve added forgiveness to a low-handicapper club. By making a club that is playable by an extremely wide range of players, they’re had to compromise somewhere, and this is the biggest example of that. 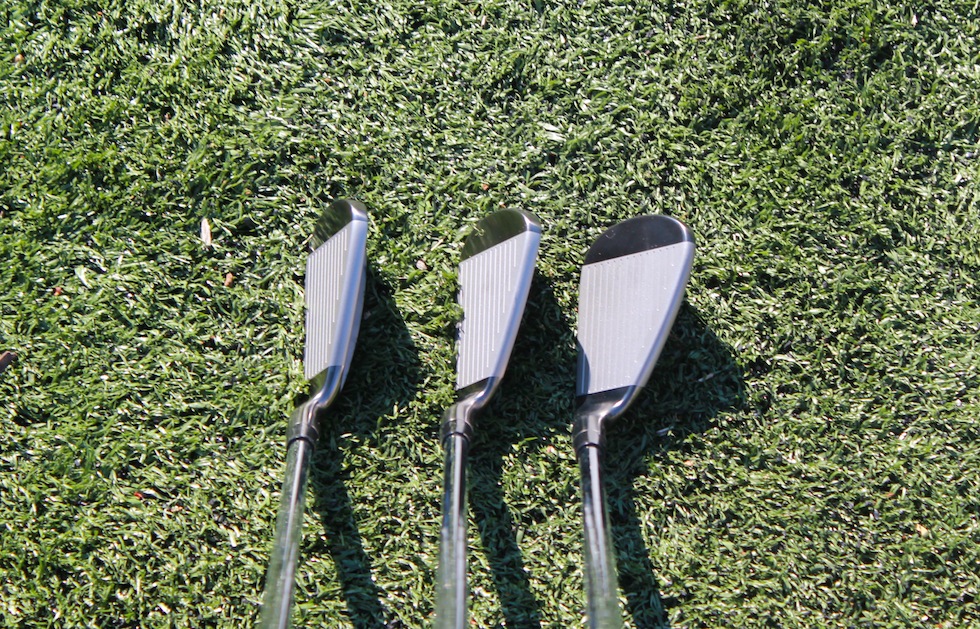 Performance
The set I received came with a 4-iron through gap wedge, an increasingly frequent case in the world of irons. They are, basically, the 3-iron through pitching wedge of yesteryear, only with longer shafts. The stock shafts are the KBS Tour 90, a lighter version of the popular KBS Tour. The 90s are designed to produce a mid to high balflight, as well as mid to high spin, and at that they do deliver.

The first thing you notice with this club-shaft combination is the weight distribution. My current irons, the Nike VR Pro Combos I reviewed last year, have a heavier shaft, the extremely common Dynamic Gold. The Nikes feel very symmetrical, in that the head doesn’t feel noticeably heavier than the shaft. The Adams CB3s, on the other hand, are light overall, but have a comparatively weighty clubhead. This takes some getting used to, as does the generally light shaft, but it does give you a nice feel for the clubhead through the swing, and the feel as the club enters the ground is downright awesome. Taking a divot actually felt good, like the solid “thud” of a well-struck greenside bunker shot. 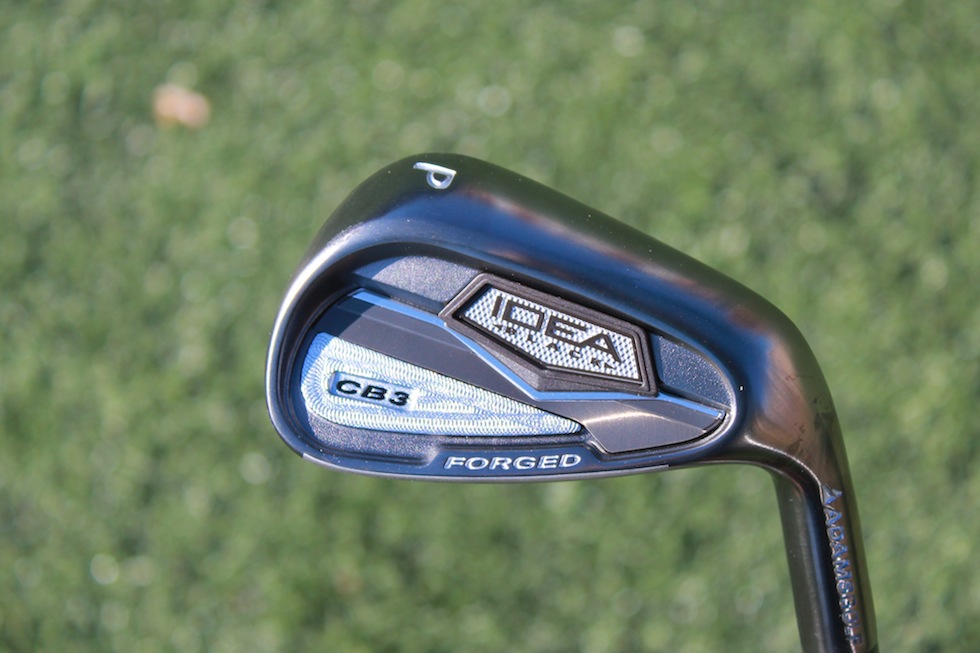 This lightness, coupled with the strong lofts and long shafts, do give these clubs plenty of distance, though it’s not overwhelming. My Nikes are several degrees weaker and a bit shorter, and the Adams only gave me about seven extra yards, about a half-club or less. That’s very nice, but ever-so-slightly underwhelming.

Going in I went in expecting these clubs to be slightly inaccurate, but man, was I wrong. At times it seemed like the only way not to hit the ball straight was to hit it off the hosel. Off-center hits are forgiven not only distance-wise but also directionally, and the face very hot. 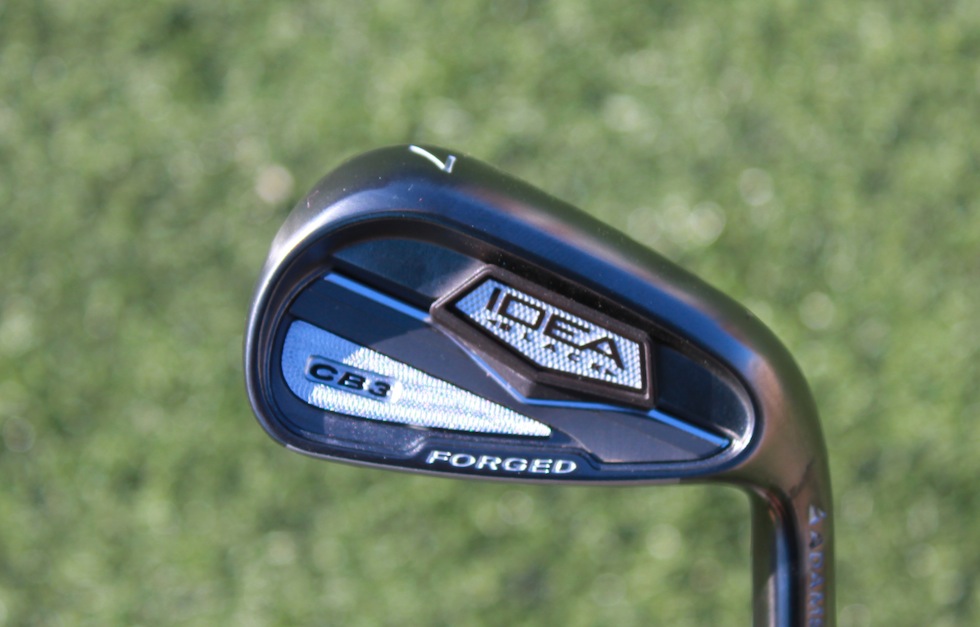 The CB3s are forged from the finest 8620 carbon steel, and the ABS and electroform badge is supposed to fine-tune the club for extreme softness. I liken the feel of these clubs to that of an expensive car. Pricey cars tend to come with one of two types of suspension: sporty cars like BMW M3s or VW Golfs tend to be firm, tuned for ultimate road feel and the supreme engine experience, while luxury cars like the Mercedes S-Class or Lexus LS tend to be softer and smoother. Both are nice, but they accomplish different things.

Blades are like sports cars, harsh and unforgiving, but when you get it just right there’s nothing better. These clubs, forged from soft steel with additional softening agents, are like the Mercedes. They’re very soft, so to point of mushiness, and the difference between toe strikes and off-center hits is almost negligible. 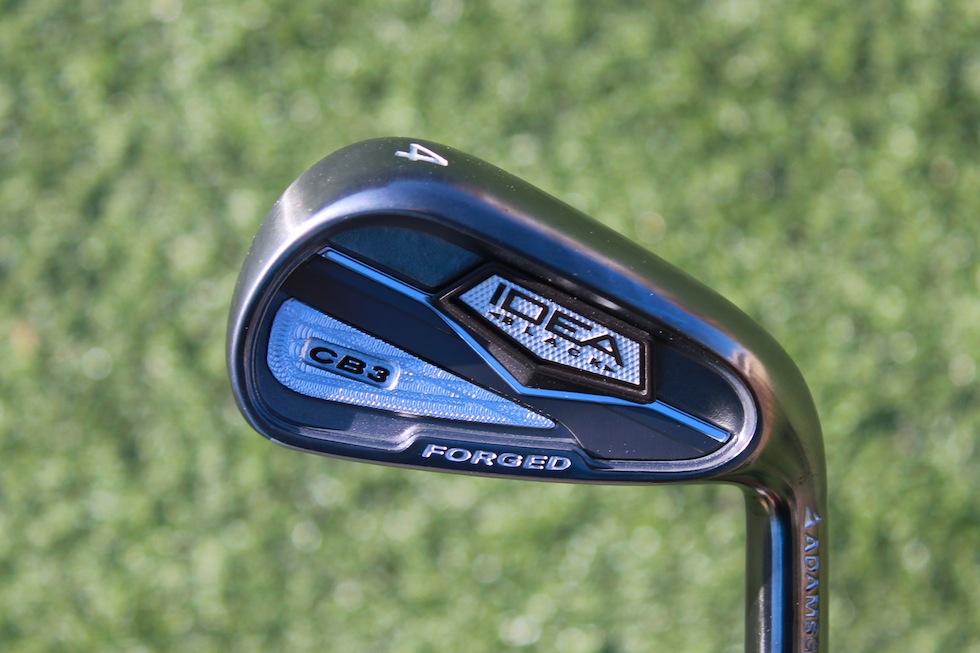 This can be a good thing as well as a weak spot. It’s nice that they don’t sting your hands on a cold day, but it is also hard to practice if you can’t tell when you mishit one.

In trying to appeal to a wide range of golfers sacrifices had to be made, and one major area is the sole of the club. It is recessed nicely for ease of contact out of the rough, but the sole is a bit large for my taste. Tight lies are not the walk in the park they should be because of this, but play out of the rough is spectacular. The CB3s are steady through the rough, and launch the ball plenty high, a benefit of the thicker soles and head-heaviness.

Specs
The Adams Idea Black CB3 Irons are available with either the KBS Tour 90 steel shafts or the Matrix Ozik Program 8.1 graphite shafts (the graphite shafts do carry a $200 premium). Adams offers several custom shafts, including the True Temper Dynamic Gold, the Project X, and the KBS Tour C-Taper. They are offered in left- or right-handed sets, and come in regular, stiff, or extra stiff flexes. 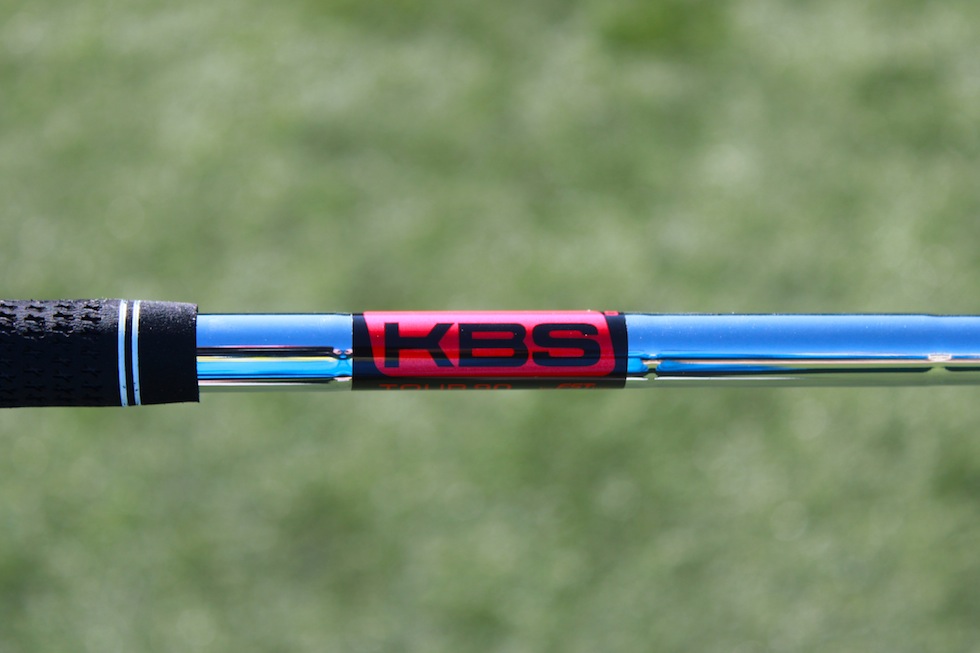 Adams also offers a 3-iron, only available for righties.

The Tour Elite Plus also has one of the best and most simple alignment logos I’ve ever seen: three parallel lines, the middle one being the larges. That wasn’t enough for me to keep the grips long-term, but if you’re looking to save money somewhere, these grips don’t have to be immediately swapped out.

The Adams Golf Idea Black CB3 irons retail for $800, a pretty good price when you consider not only the wide range of players that can play these clubs, but also the prices of similar sets. 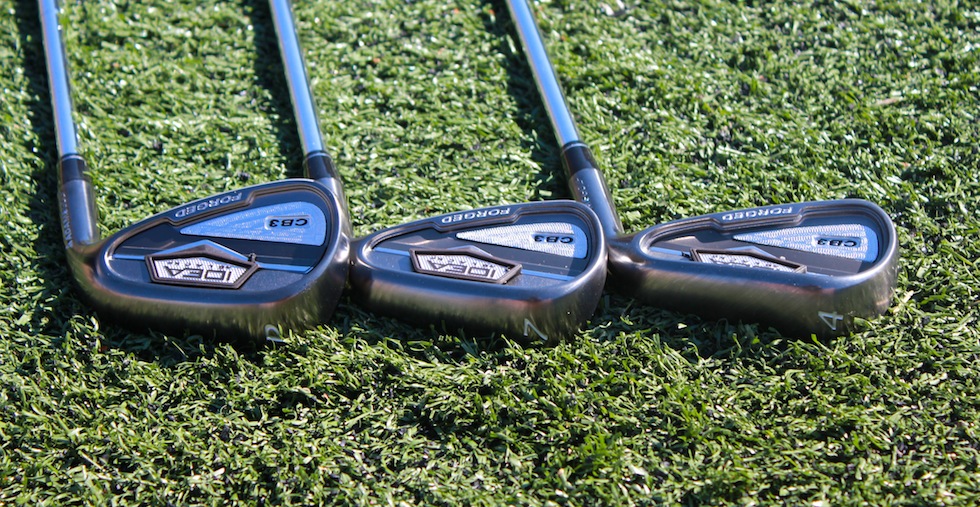 Conclusion
In the case of these irons, Adams has tried to appeal to everyone. They may not have succeeded 100 percent, but they’ve gotten darn close. Everyone will like the soft feel, and many will like the appealing club size and shape. I’m a low single-digit handicapper, and though I’m not yet sure if these will remain in my bag long-term, but I’ve yet to meet a golfer that cannot hit these clubs.

I would prefer it if Adams offered customizable sets (I would probably swap out the gap wedge for a 3-iron, though even then my loft gaps would be messed up), and I’d like to see the offset reduced just a touch, but I have no major gripes with these irons. They hit the ball far and straight, and if you’re in the market for a new set of irons, you would be doing yourself a disservice to overlook these clubs.