Callaway’s latest flagship irons combine the precision of a player’s set with the forgiveness of a game-improvement set in one package. 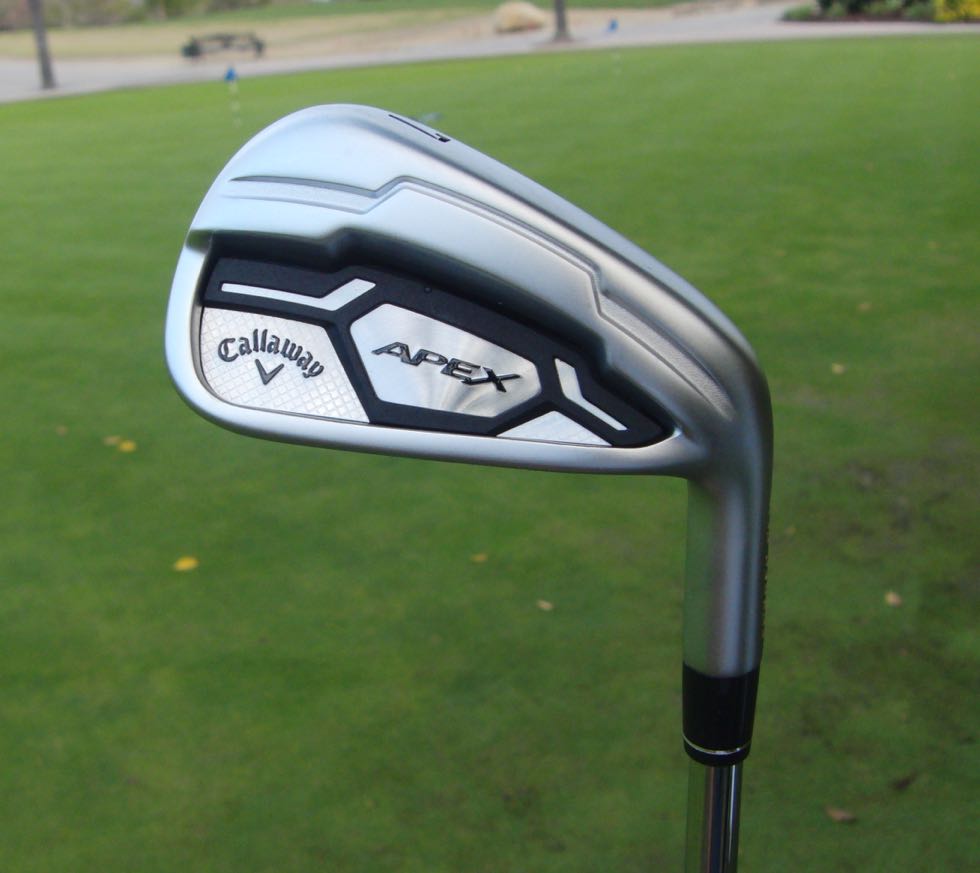 It seems more and more nowadays that the landscape of golf equipment is changing. Where there used to be fairly distinct categories of clubs meant for certain skill levels (blades and cavity-backs, players irons, game-improvement, and super game-improvement, etc.), clubs are designed now to benefit and appeal to a broader range of golfers. Equipment manufacturers have found that even better players appreciate additional forgiveness in their irons while less skilled players can still use workability and good feedback on mis-hits, just as long as they don’t come with significant loss in distance or accuracy.

Callaway’s newest flagship iron, the Apex CF16, is blurring the lines once again. As the first forged irons to feature Callaway’s Cup 360 technology, it blends the characteristics normally found in a game-improvement iron with those of a forged iron. The Apex name has a long history of being top of the line in forged irons and the previous Apex offering, the 2013 Apex irons, lived up to the standard. With the CF16s, Callaway sets the bar even higher by pushing the limits of speed and distance out of an iron while maintaining the same high level of precision that Apex is known for.

Does it live up to the hype? Can Callaway have it’s cake and eat it, too? Read on, to find out.

Technology and Design
The Apex CF16 irons are a multi-piece construction that consists primarily of the 1025E forged carbon steel body and 17-4 stainless face cup (also forged) which are then fused together through laser welding. It is the same face cup technology that has been used in the company’s fairway woods as well as the Big Bertha and XR irons; it is also what puts the “CF” in Apex CF16. There are also several other components such as the thermoplastic elastomer insert and the thermoplastic urethane medallion that serve to enhance the look, sound, and feel of the club. 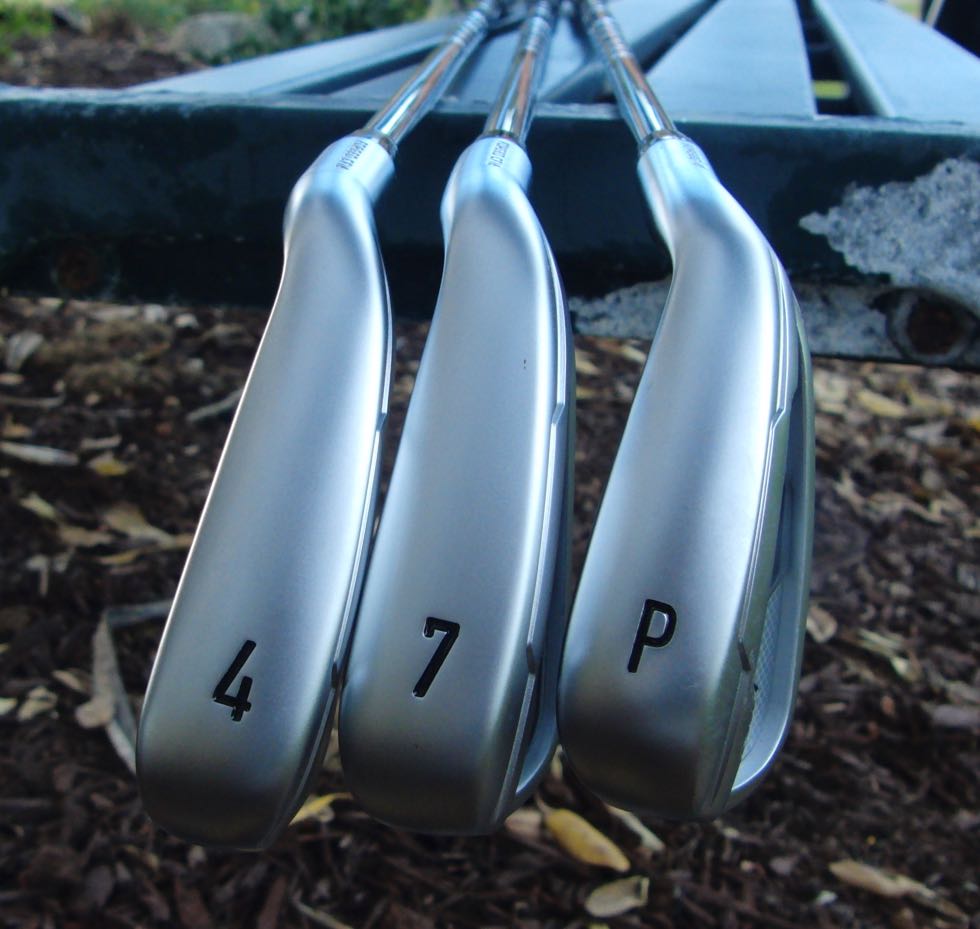 Like most irons in its category, the Apex CF16s are progressively designed. The 3-7 irons are built primarily for increased distance and forgiveness while the shorter irons (8-AW) are built with feel and accuracy in mind. Longer irons feature more offset and wider soles while shorter irons have more compact heads.

As part of this progressive design, the Cup 360 technology is only built into the 3-7 irons. Along with an aggressive undercut cavity inside the sole, Callaway was able to build the club with more of the face unsupported, allowing it to flex more at impact. This creates greater ballspeeds across the face, including on off-center strikes which leads to greater distances and more forgiveness. Callaway says that the face cup pushes the irons right up against the USGA limit on COR. 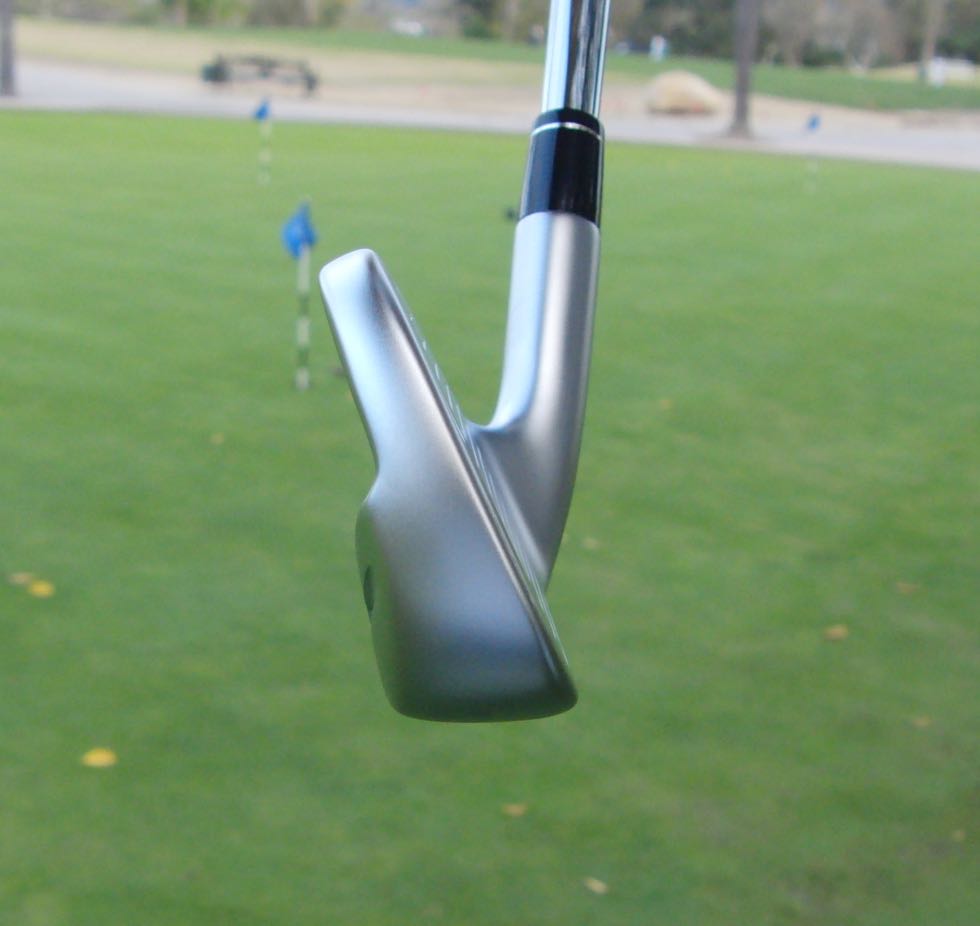 Esthetics
The Apex CF16 irons are designed with the more traditional look that better players like in their irons. Callaway has hidden away all of the technology inside the clubhead it self, leaving a very clean look to the clubs. There are no flashy colors or design aspects that jump out at you. Every club in the set has a similar look to it and they flow seamlessly from one club to the other. They are finished in a satin chrome which I find very pleasing to look at.

At address, the clubs frame the ball well. It is definitely a compact head with a fairly slim (not razor thin) top line. As mentioned previously, the offset is progressive, but even on the 4I it is not a significant amount at all. You can see a little bit of the cut-out from the cavity once you get to the longer irons, starting with the 4I, but not enough that it would be considered a distraction. 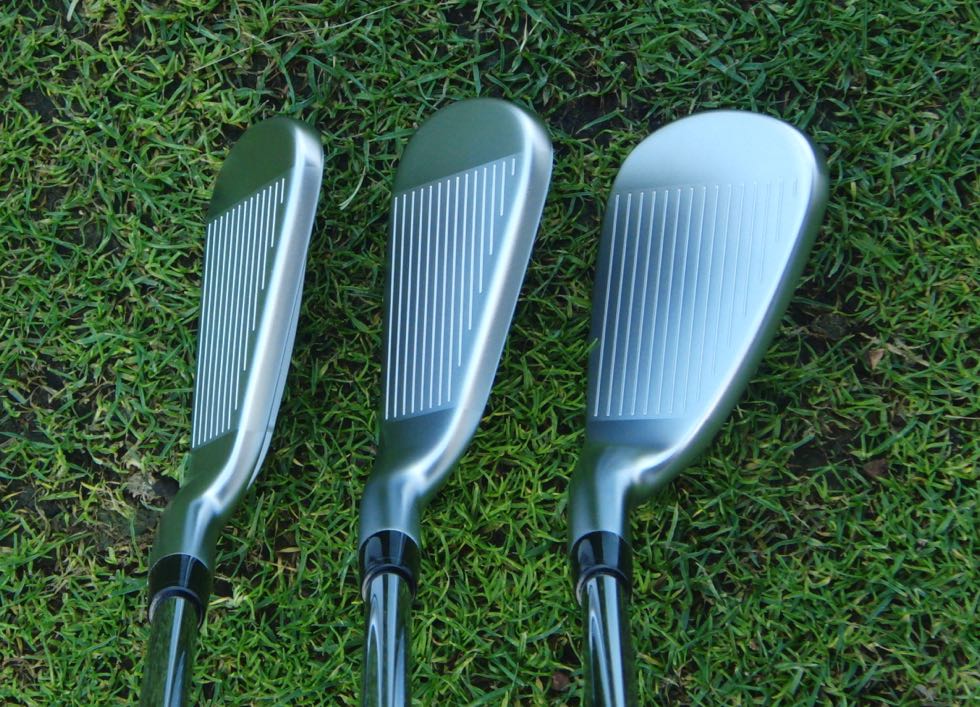 There isn’t really a whole lot else going on in terms of the design elements. On the back of the club you will find the TPU Apex medallion as well as the aluminum Callaway medallion. There’s also a little bit of a “stripe” cut out of the club for some stylistic flare. Beyond that, the words “Forged CF16” are stamped on the hosel. The irons have a sleek and simple design with a classic feel to them.

For this review, I received a 4-PW set with the stock True Temper XP 95 shafts in stiff flex.

Performance
I wasn’t really sure what I was going to get when I first got the Apex CF16s. Unlike most other reviews I’ve done, I didn’t have any experience with these clubs before I received them. I took them out to the yard and hit balls into my net. With no ballflight to give me feedback, I focused solely on the feel and sound. I’m not a good ballstriker by any stretch of the term, but these irons felt a lot easier to hit than I expected. The ball really jumps off the face. Solid contact is rewarded with a nice soft feel. It’s not the softest iron I’ve ever hit but it more than makes up for it by having a larger sweetspot. 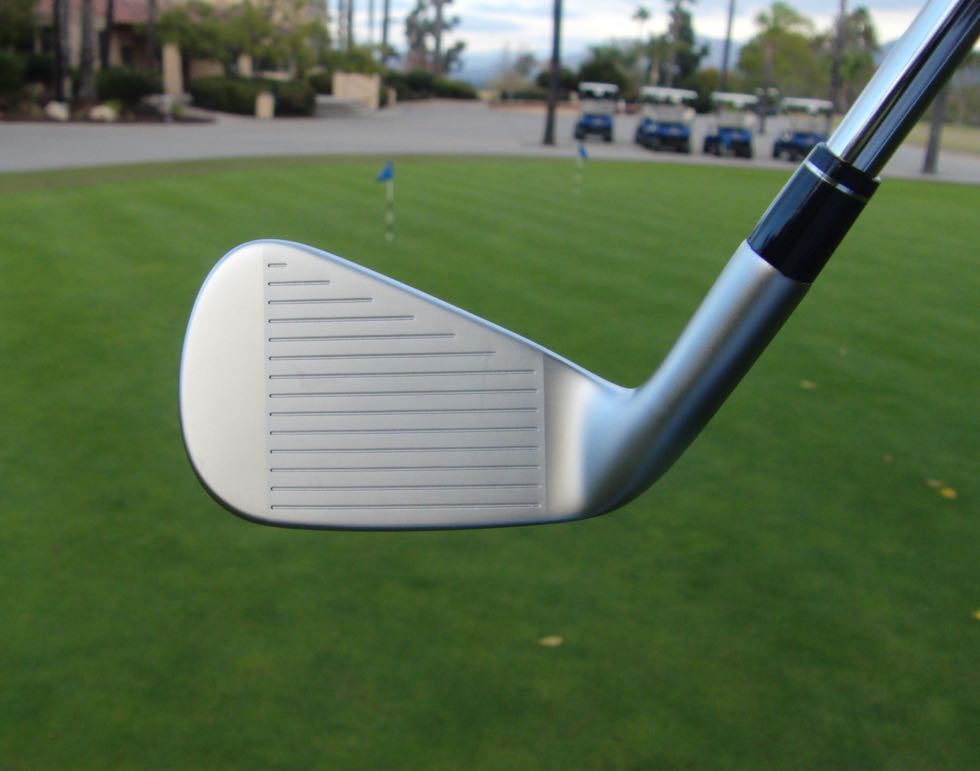 There is also plenty of feedback on mis-hits. My typical miss is towards the toe and I knew right away when I caught the ball too far out there. Thin shots didn’t sting my hands but it was fairly easy to tell when I caught one low on the face.

Sound is good, too, although it’s one of those subjective things that’s less detectable in an iron than say, a driver. I find it easier to point out an iron that doesn’t sound right rather than one that does, and nothing stood out about the Apex CF16s. However the TPE and TPU work together to accomplish this, Callaway got it right.

My first impression was that these are well designed golf clubs that are solid all-around. Nothing really “wowed” me about them, though. That changed when I got them out on the range. The consistency I got with these irons was excellent. I want to reiterate that I am not a good ballstriker, yet I kept getting reliable results with the Apex CF16s. Every shot I took with them was a playable draw, which is my typical shot shape, but the dispersion I saw was tighter than what I was used to. 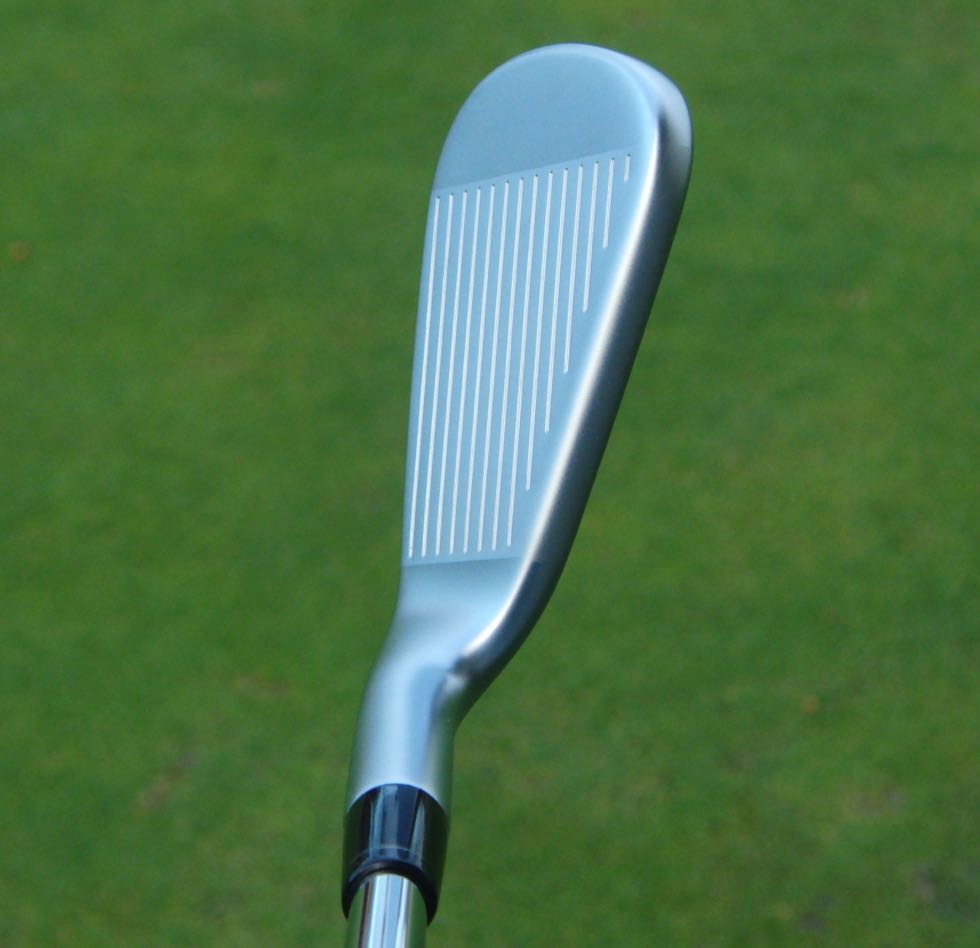 With the True Temper XP 95 shafts in them, the Apex CF16s launch the ball high. The ball seems to climb fairly quickly to it’s peak height and hang there. I wasn’t ballooning it or getting excessive spin at all. Despite that, I had no problems when I wanted to flight the ball down. I like to see that in an iron because there are a lot of times where I like to (or have to) work the ball lower and I was glad to see that they are up to the task.

I don’t typically shape the ball left and right when I play, but I had no problem hooking the ball or putting a big banana slice on it when I tried, which is good to know when I find myself in trouble on the course. I’m certain that these clubs would have no problem meeting the demands of a better player to fade or draw the ball at will.

In a side-by-side comparison with my current irons, I didn’t see a significant change in distance. I wasn’t expecting to hit them longer but I was glad to see I didn’t lose anything on mis-hits. What really impressed me most as I mentioned was the dispersion was much better with the Apex CF16s. There were some shots that I hit where I thought right away, “I didn’t hit that well,” only to follow the flight of the ball to a decent result. In fact, I hit the CF16s with a consistent draw pattern, whereas some of my misses with my other clubs were straight pushes or even faded at times. I can’t say for certain that it is the irons that caused it or the lighter XP 95 shafts being a better fit for my swing, but it’s significant enough to be worth mentioning. 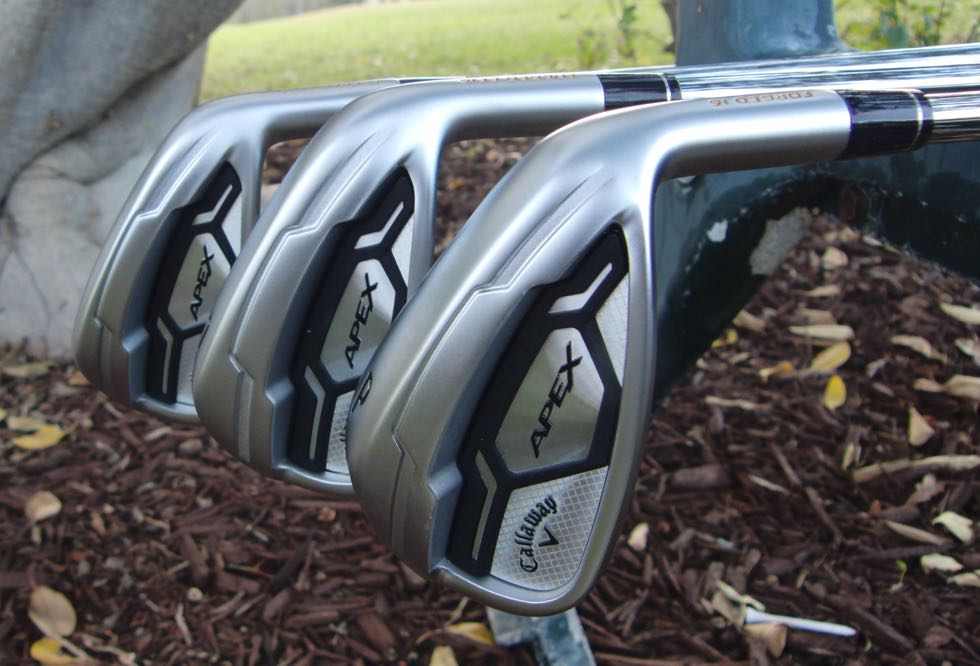 Conclusion
Overall, I really like the Apex CF16s. They are demanding enough to give me plenty of feedback as I improve, but are forgiving enough that I can play them without detriment to my game. Knowing the consistency and tighter dispersion I get with them is certainly going to help me score better and give me a confidence boost as well.

If there is anything negative I can say about these irons, it would be the price. They are premium clubs and a lot of players will balk at the price tag. While I’m not going to tell anyone how to value their golf equipment purchases, I will say that a lot has gone into the development of these clubs. The Apex CF16s are not just a re-branded rollout of a previous model year with a high price tag. I recommend that you give them a try. You might be surprised as I was at how well they perform.

Callaway has a lot of respect for the legacy of the Apex name and they’ve done well to honor it with the Apex CF16 irons. Their engineers wanted to improve on the performance of the 2013 Apex irons while incorporating the face cup technology. The end result speaks for itself.