Callaway has an exceptional players iron in the Apex Pro 16. Getting feedback from touring pros they have developed one of the better performing and looking irons in the market 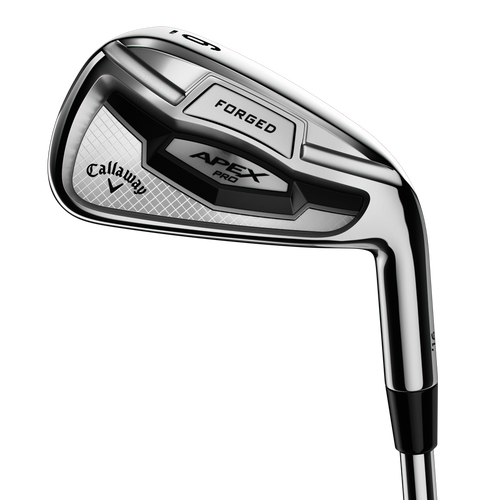 Nowadays, it seems hard to define what a “blade” is in golf. Growing up and working most of my youth around golfers, I always considered it those muscle-backed butter knives the really good players had in their bags. Playability was very minimal and you had to strike the ball perfectly in the center to get a result close to what you wanted. Since then we have progressed into a world where some of the best players in the world are playing irons that look quite different.

With that in mind, Callaway has introduced their latest player’s irons, the Apex Pro 16. These are not “blades” but irons that some of the best players in the world (see: Phil Mickelson) have had in their bags at some point in time over the past year. Callaway has attempted to please these players with molding the looks of the X-Forged ’13 irons with the newest technology and materials the world has to offer.

Did Callaway succeed? Read on to find out.

Design and Technology
Based on feedback from their staff players, most liked the shape and profile of the X-Forged ’13 irons but the trajectory of the original Apex Pro. The goal in the Apex Pro 16 irons is to marry those two irons together into the look and performance that is preferred in both sets.

The Apex Pro, unlike the standard Apex or Apex CF16 irons, is a solid piece of forged metal. Callaway developed the Apex Pro irons using quadruple net forging and 1025 mild carbon steel. The result is a much softer feel for a forged iron. The new Apex Pro 16 will also give the player consistency and control as would be expected from a forged iron.

Behind that ‘Forged’ plate is the secret to the success of the Apex Pro’s.

The other major piece of technology in the Apex Pro 16 is progressive flow weighting. Callaway wanted the lower irons to have a higher launch and the higher irons a more controlled, penetrating trajectory. To do this, they have cut out inserts behind the ‘Forged’ plate on the back of the iron. Lower irons have tungsten inserts to lower the cg for higher launch. Mid-irons have stainless steel in the inserts and higher irons have empty inserts that make the cg higher to accomplish the desired trajectory.

Aesthetics
For a good portion of the 2014-2015 season, Phil Mickelson went between a couple different models of irons. As mentioned before, Callaway worked with tour pros to marry look, feel and performance together into a model that they would want to put into their bag. It seems to have worked as this year Phil has had the Apex Pro 16 in his bag.

From the top, the Apex Pro’s have a very clean look like many other forged, performance irons. They have a very similar look to my current forged irons with very little offset and a nice, thin top line that most players prefer. 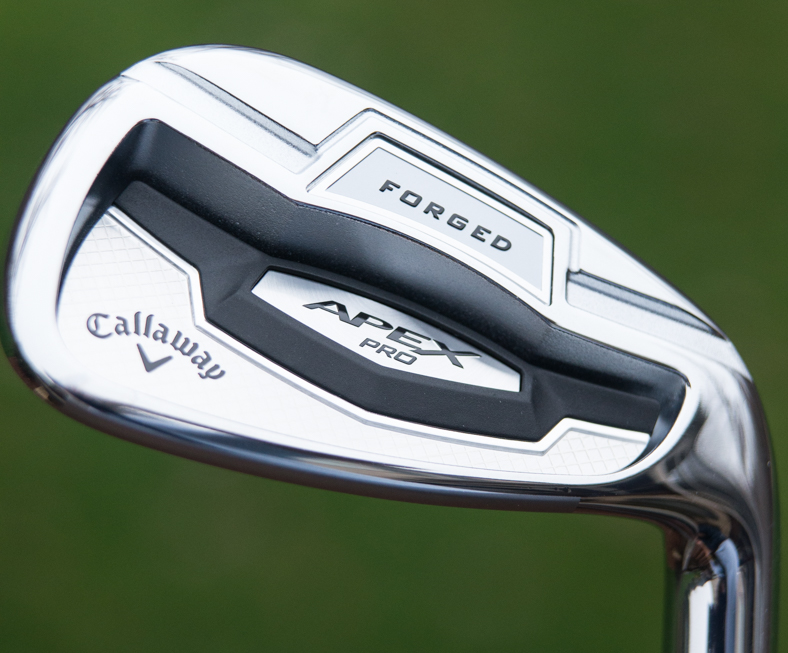 Callaway has made some of the sexiest and highest-performing clubs.

As for the rest of the club, I’m happy to say it only gets better. I’ll start off by saying that I’ve always been a big fan of the look of traditional muscle-backed irons. The lines of one solid piece of metal harken back to the what ‘blades’ use to mean and what we always saw the best players have in their bag. Now, over 70% of the tour players use some form of a cavity back.

With that being said, the Apex Pro 16 cavity is smaller and well designed. As mentioned before, the bottom of the back of the club is stamped with a ‘FORGED’ plate which conveniently hides the progressive flow weightings. Below that is where the cavity begins.

Inside the cavity there is a black plastic insert that is centered and designed around the Apex Pro label. While I actually like the look of the insert, I’m not sure exactly what it is supposed to do other than aesthetics. A concern is that this piece may not stay in place for the life of the product, but that remains to be seen. I’m glad Callaway did not include any color on this insert. I’m slightly picky when it comes to color on irons. I don’t think it belongs and prefer irons to operate in, as Batman in the Lego Movie puts it well, black or grey.

The rest of the cavity is filled with a nice cross-hatch pattern and stamped with the Callaway logo. Overall, I think Callaway produced one of, if not the best looking club this year in what I would consider the ‘players irons’ category. Many are too busy with patterns and color. Callaway’s Apex Pro 16 are a good blend of classical and modern.

Now, will the performance match the looks?

Performance and Feel
I haven’t done a review of irons in a while and also hadn’t really tested any irons in a while. With that I had no ideas or expectations for these irons. Just picking up the clubs and taking a few practice swings the clubs felt a bit heavier than my existing ones. Nothing that concerned me, just noticeable enough to make a note.

The first handful of full shots with a 9-iron I hit were a little thin. I’d attribute this to the fact that it’s early in the year and I hadn’t been to the range all that much to tweak my swing. Once I loosened up and adjusted a bit things started clicking. The sound of a well struck ball was not a loud crack but a little softer but very pleasing. It’s a very subjective observation, but it matters to some out there. 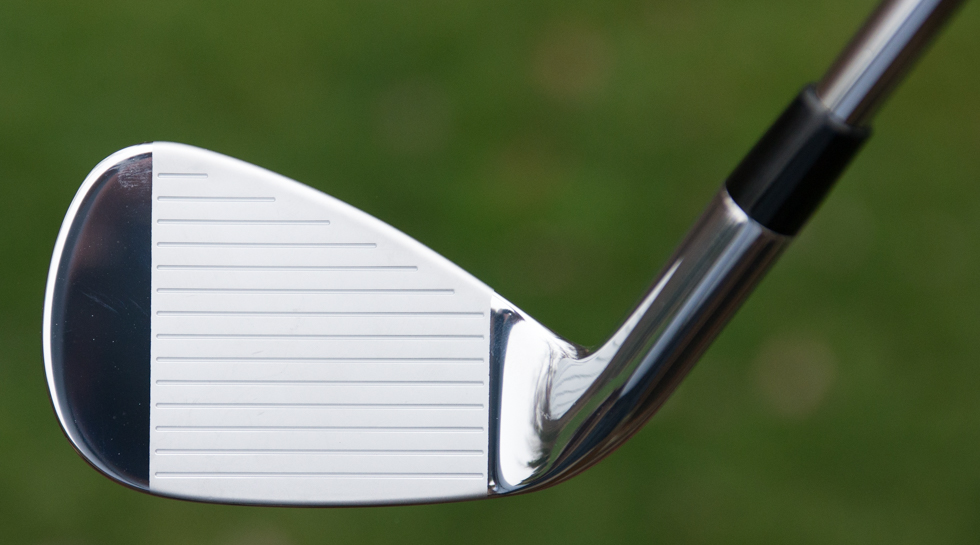 Great feedback off the face but forgiving on mishits.

The feel off of the face was softer than what I’m used to coming from non-cavity backed irons. The good thing is that there is plenty of feedback to know if you are on the toe or a bit towards the heel of the club. When I did mis-hit the ball the club was very forgiving. Shots just slightly off-center did not suffer any sort of distance loss or go too far off line. Those that were off the toe more or on the heel still fared very well. Even better than the clubs I have today.

The other thing I wanted to look at a bit more with the Apex Pro 16 was the flight of the ball. Since Callaway put a lot into the progressive flow weightings in these irons I tried to take good note on the trajectory. 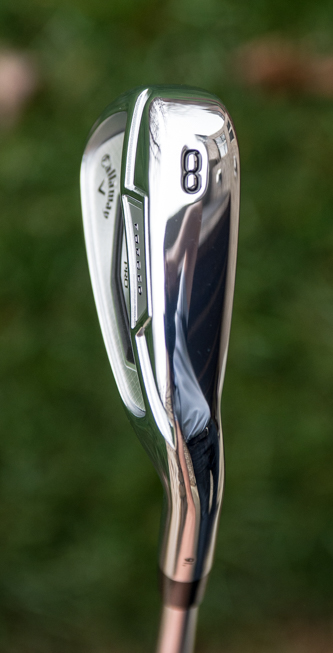 The first set of shots with wedge and 9-irons flighted about how I thought they would. The loft on the two irons are identical to my current set so when the Apex Pro’s produced a similar ballflight to my muscle backed irons I was pleased. If anything, they might have flighted a touch higher but I was fine with that since I normally have a low trajectory.

As I worked lower and lower in the bag there were similar results. The longer irons were probably, again, flighting a bit higher as the designers had intended. I hit half a bucket of 5-irons and really liked the way the ball came off the face. On well-struck shots the ball came off the face hot with a nice, penetrating flight. Overall, with the progressive flow weightings, this is definitely one thing they got right and a big plus on the checklist.

A standard 4-AW set will retail for $1,199.99. Callaway also offers a number of other shaft options at no additional cost.

For this review, I received a 3-PW set with the stock S300 shafts in them.

Conclusion
Overall, I’m really pleased with how the Apex Pro’s 16 performed. After kicking off the rust from winter I thought that they performed exactly as advertised. Across the face of the club the feeling and flight of the ball was consistent. There wasn’t a discernable change or advantage in distance but that’s not what I was looking for.

If you’re an above average player looking for a new set of forged irons, these could be the ones for you. Not only did they perform very well but they look pretty nice too. Callaway has done a great job with the Apex Pro 16 irons and are definitely worth a try if you’re in the market.