Mizuno releases the MP-15 irons, blending the MP-59 and the MP-64 they are targeting low handicappers and giving them forgiveness without sacrifice.

When you talk with most golfers and you ask them who has the best irons, Mizuno will come up at some point in the conversation. Mizuno has consistently delivered great irons for decades. The MP line of irons from Mizuno is traditionally dedicated to “player” irons. My regular set of irons before doing this review is the MP-4 which was reviewed here. There are days when the MP-4s tend to be on the demanding side for a golfer of my caliber. So when the opportunity came to review the MP-15 I was extremely excited to give them a whirl.

The MP-15 are designed for the golfer like me. A golfer who is looking for just a little bit more forgiveness than the MP-4 but remaining loyal to the forged iron and the feel that they provide. The recommended handicap range for golfers using the MP-14 is zero to eight which I fit in nicely. In addition to the classic look that Mizuno typically provides the designers threw in some very cool bells and whistles to help your ballstriking. With that lets get into the review.

Technology and Design
At address these irons look extremely similar to the MP-4 blades that I have used prior to getting my hands on the MP-15. They have a classically thin top line, which better players like me tend to prefer. There is more offset and it is noticeable, also the head size is slightly larger and it can be noticed at times when compared at address. 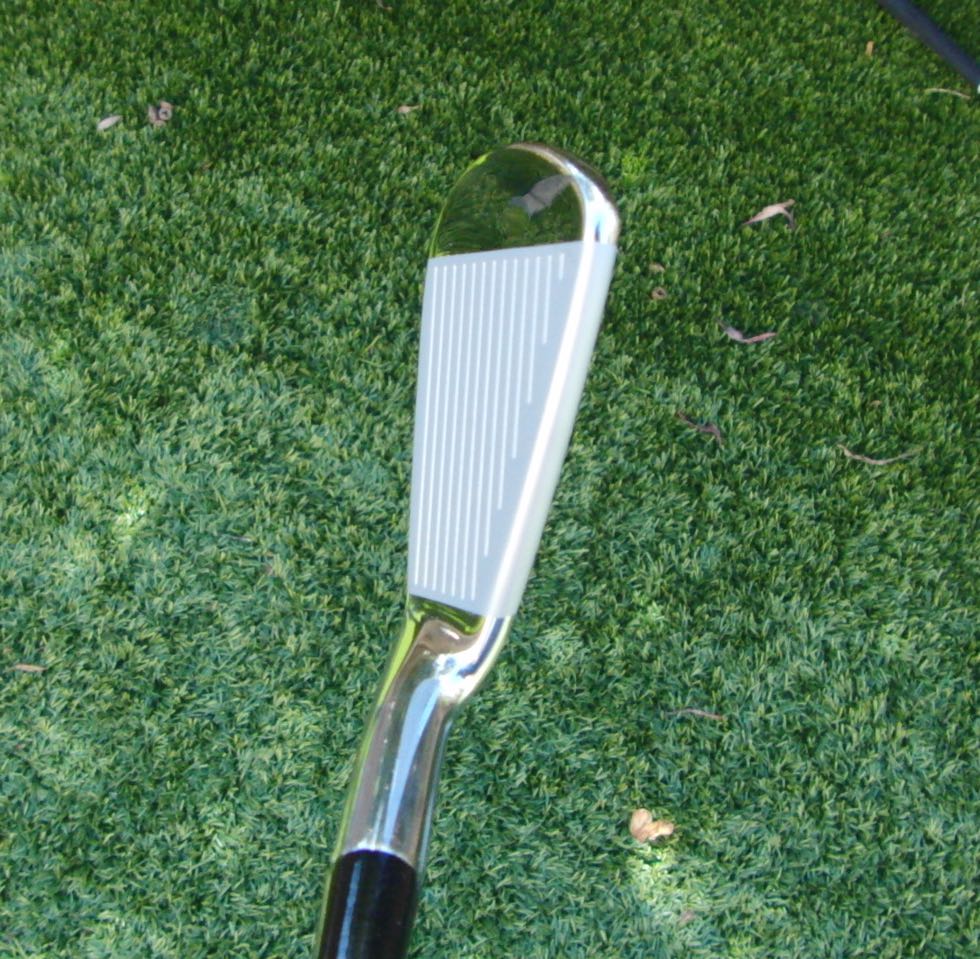 The biggest innovation that has been added to the MP-15 is the Ti Muscle which is a 3D titanium insert added to the back of the sweetspot to increase forgiveness and provide a solid feel to the irons. The insert is ten grams of multiple materials including titanium. They then add thirty eight grams of steel to maintain a solid feel while freeing up discretionary weight to increase the MOI. For the MP-15 the Ti Muscle has been re-engineered and forged directly into the steel framework to allow the clubface to maintain thickness behind impact for a solid feel while allowing weight to be shifted to the perimeter to provide full cavity forgiveness.

The Ti Muscle is not new to the MP line. The MP-59 also have this feature. In fact one of the designers at Mizuno Tetsuya Kanayama describes the MP-15 as a blend between the MP-59 irons which employ the Ti Muscle and the MP-64 which are a straight muscle back forged iron from Mizuno. 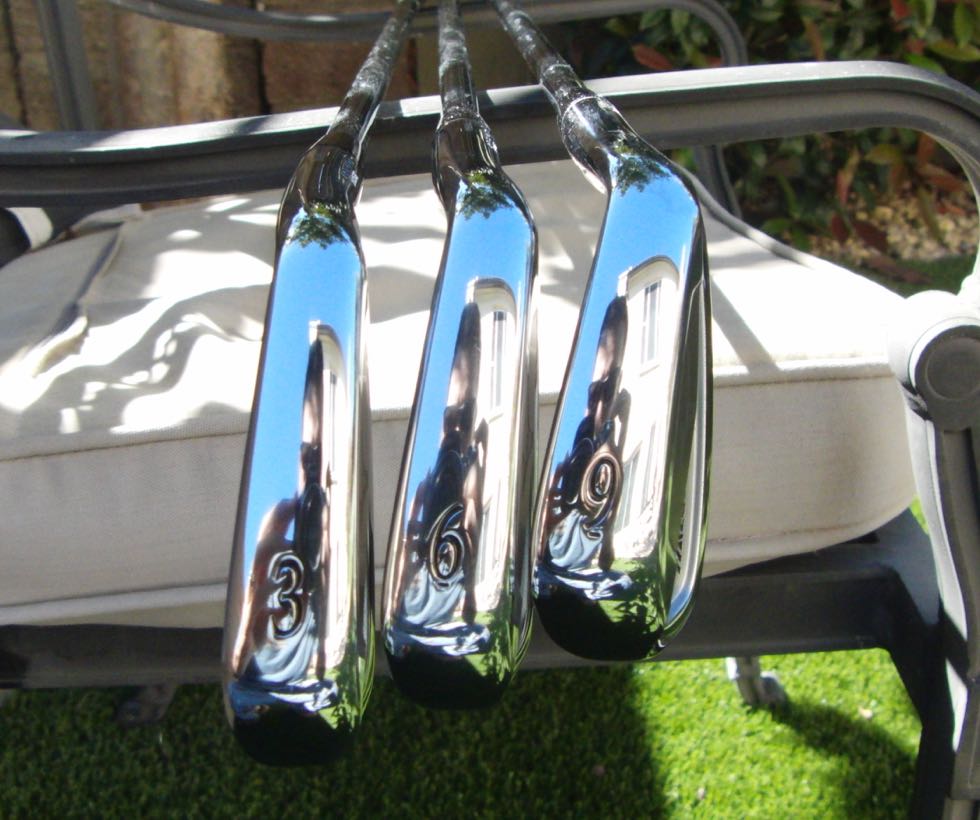 Mizuno has been using 1025 carbon steel in the MP irons for some time now. The MP-15 use the 1025E which is a mild carbon steel or as Mizuno calls it a “Pure Select” as they are combining the grain flow forged mild carbon steel with the pure Titanium to provide the ultimate soft, solid and consistent feel.

Mizuno states the MP-15 delivers the perfect blend of classic looks and high tech forgiveness. They have coined the phrase “Forgiveness without Sacrifice” which is a nice tag phrase for just about anything especially golf clubs. Certainly we all could use forgiveness with a side of high tech mixed in.

Esthetics
My initial impressions of this iron when I first took them out of the box was they stayed fairly close to the traditional look that almost all of the MP irons from Mizuno have. Chrome is a staple for all of the MP irons and the MP-15 are really no different. 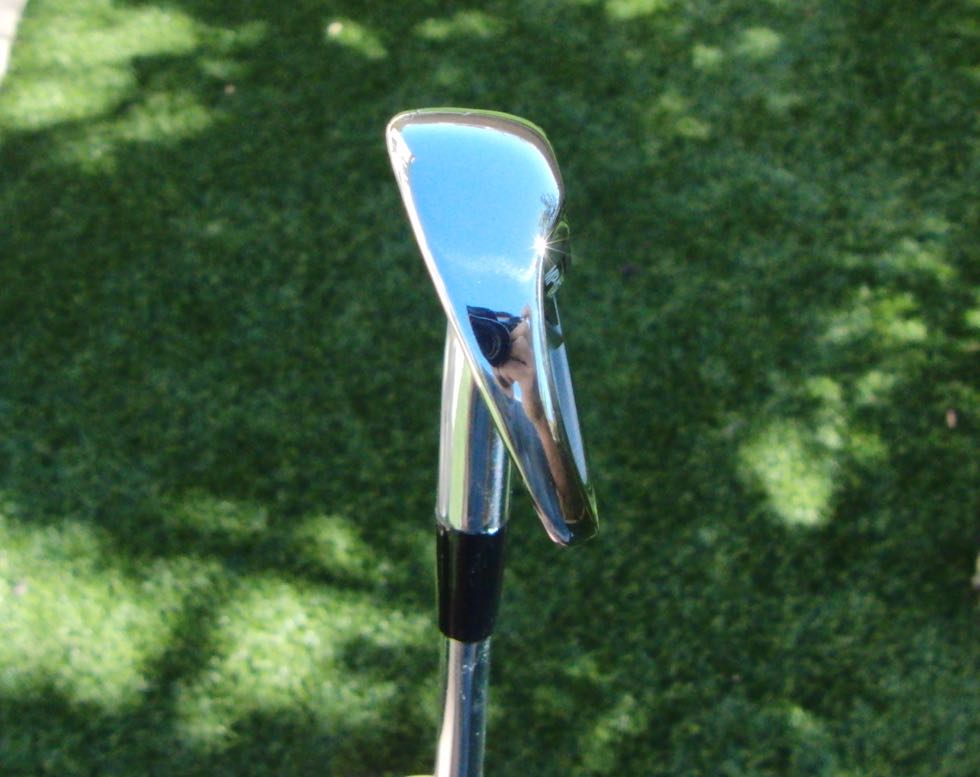 The slight modification for the MP-15 happens at the back of the clubhead. The Ti Muscle is a few shades of darker grey than the traditional chrome look of the rest of the clubhead. In pictures or in my swing videos the Ti Muscle looks almost black or at least a dark shade of gray. The color is quite hard to describe because the muscle often looks different in different lighting conditions. Most times I am able to notice the MP-15 in other golfers bags because the Ti Muscle can often look black which is not traditional when looking at Mizuno clubs in someone’s bag. I cannot say when I looked at the iron that I fancy the look of the Ti Muscle design. It does not match with the traditional design that Mizuno irons have, because it is small it is not overly intrusive but strange looking nonetheless. 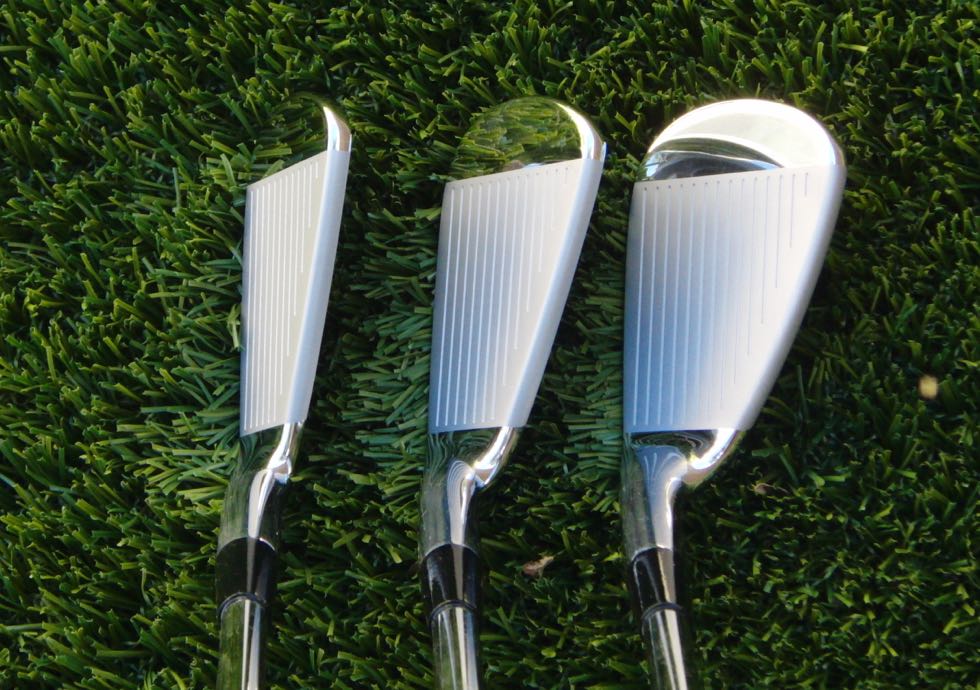 The Ti Muscle is well portioned and placed directly in the middle of the clubhead, but you will no doubt notice it when the clubs are sitting in your bag. The muscle itself is buffed to a shine. Because it is so dark it does not reflect like a mirror. The Mizuno logo is in the middle of the muscle and then MP-15 and Ti Muscle are engraved in the top portion of the muscle.

The rest of the clubhead can be described as standard Mizuno fair. Polished chrome around the entire backside of the clubhead and a matte gray finish inside the cavity with a blue Mizuno logo engraved near the toe inside the cavity. The polished chrome spills over to the face on either side of the front of the face that does not have grooves, and continues right up the hosel. The top line is painted with a matte finish to ensure that you don’t get any glare when putting the clubhead behind the ball at address.

The grooves don’t have any paint fill and are classically done. At address the offset it noticeable. I found that some of the golfers in my group felt the offset was subtly done and thus inspired confidence in how the irons looked at address. For me it took some adjusting to the offset look but in the end I liked how they looked. The clubhead itself, especially the longer irons, are larger than the MP-4 I use regularly and to some this may be a turn off. I think in terms of pure cc volume the size is not much but it was big enough for me to notice. 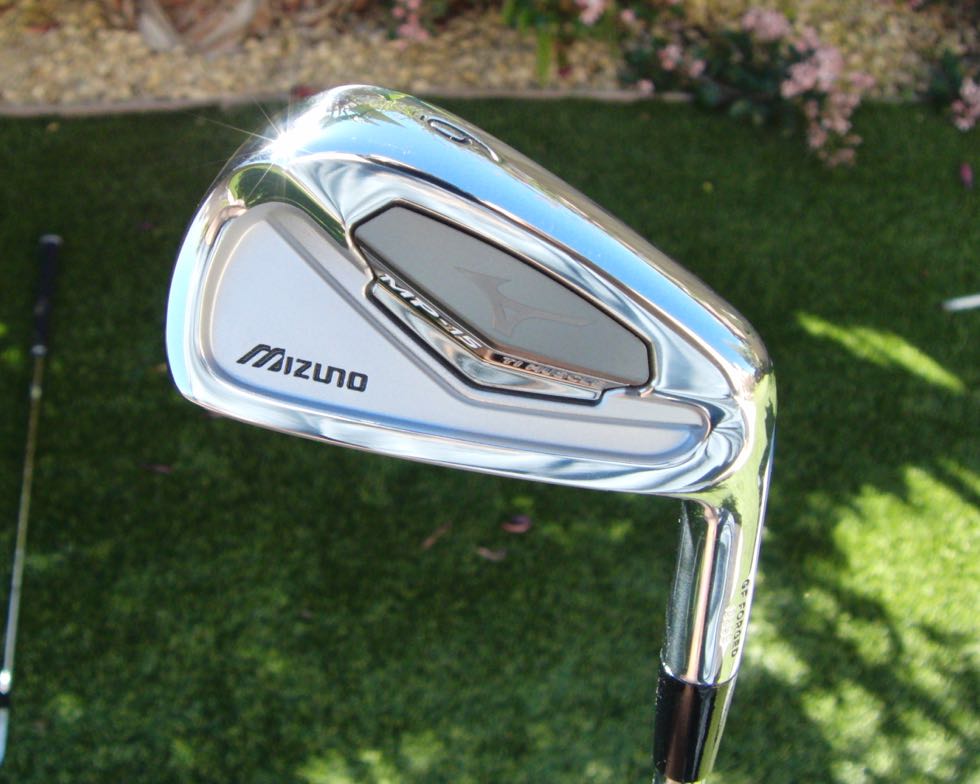 On the hosel the letter GF Forged which stand for Grain Flow Forged are filled in with black paint and the 1025E denoting the type of metal the clubhead is made from is filled in with white paint. The club is finished off with a black ferrel and my set has a stainless steel shaft leading to a standard Mizuno Golf Pride grip.

Specifications
The MP-15 are standard in most every way. When I compared them to my MP-4 they matched identically. This is nice if you are looking to mix and match any irons. Mizuno recommends that golfers with a handicap range of 0-8 use the MP-15 irons.

Performance
The common comment from folks when talking about Mizuno irons is they feel like a hot knife through butter. I am not going to say that because well, that is not how they feel to me. The interesting comparison for me when it comes to feel is how they stack up against my MP-4 irons. My conclusion is that they are pretty close. Which is a very good thing. When hit on the sweetspot if you had me close my eyes and hit one I probably couldn’t tell the difference. With shots hit on the thin side I would go as far to say that the MP-15 felt even better. Gone is the bone crushing vibration that you can get from the MP-4 when hit thin.

The next big comparison to the MP-4 is workability. I give the MP-4 the slight edge here because at times I found the MP-15 to be hard to put much movement on the ball. Not saying I only ever hit them straight, but there was not much movement on the ball left or right. I think for the better player this will be a little bit of a turn off, but for the average player which I fall into this is not an issue that would keep me from purchasing the irons. Also with the offset that the irons had I felt it was at times very difficult to “feel” that I could hit a fade with these irons. Sure when I hit the ball with an open face to the path the ball faded, but it was hard to feel that I was going to be able to hit a fade due to how the clubs looked at address. 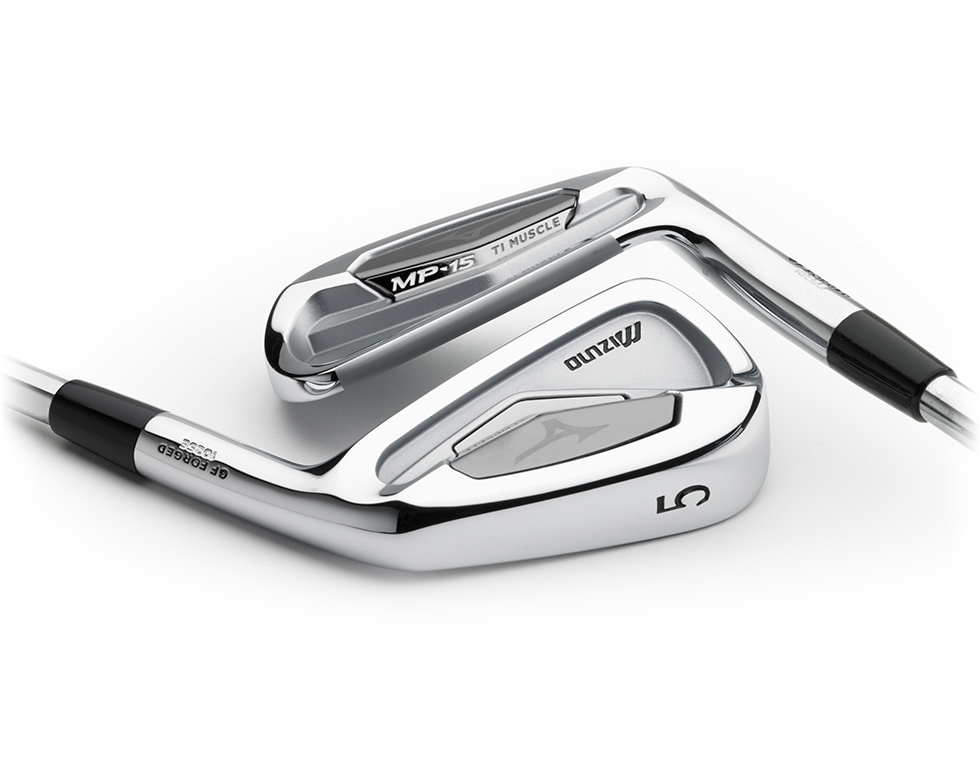 The forgiveness of the MP-15 is superior to the MP-4. Toe hits can at times lose very little distance which can be a real surprise. And as mentioned above thin shots lose no distance over the MP-4. Heel hits were mostly comparable. For a golfer like me when I was not hitting the ball all that well with the MP-4 my score would suffer, with the MP-15 I found that I could be a little bit more off with my swing and not get punished quite as much.

My testing for the MP-15 was done with the Dynamic Gold S300 shafts which are a standard shaft for most types of irons. They make a nice companion to the MP-15 in terms of ballflight and overall feel. The Dynamic Gold’s have a nice boring trajectory that can help in the wind and the MP-15 head launches the ball a little higher than the MP-4 head so the DGS300 shaft helps to keep the ball from ballooning in the wind. I might also like to try the MP-15 with a KBS shaft as they tend to hit the ball a little higher, especially if you are a golfer who is looking for a bit more height with your irons. Both the MP-4 and MP-15 have a lower launch profile than most of the newer irons that are on the market today. 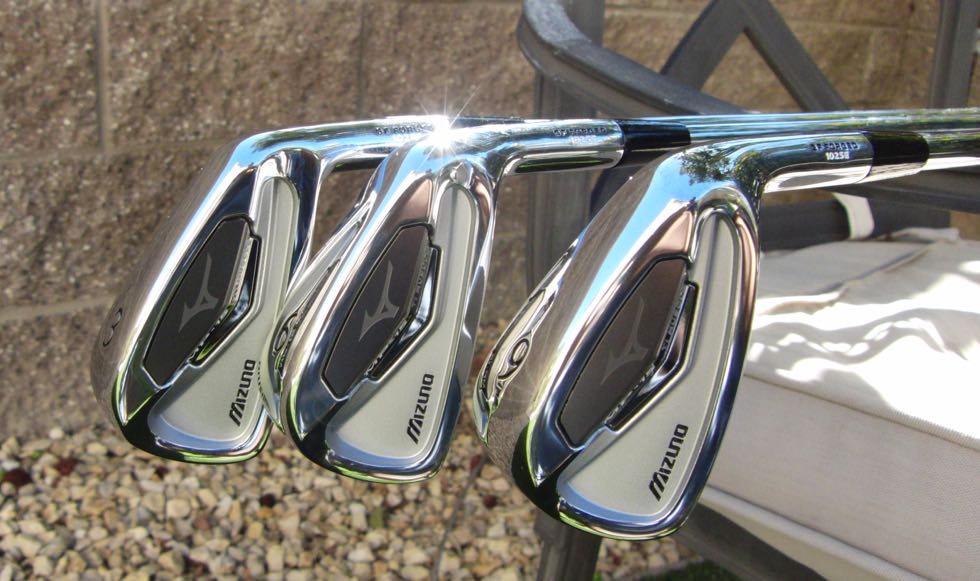 Conclusion
In the end I have decided that I cannot decide between the MP-15 and the MP-4 , so I am going to play both. No, not both sets, but a mixed set. Four iron through seven will be the MP-15 and eight iron through the pitching wedge will be the MP-4. This way I get the best of both worlds. I will need to make a trade off of some workability, but I will get that back particularly in the longer irons with the forgiveness allowing me to be slightly less precise on off days. 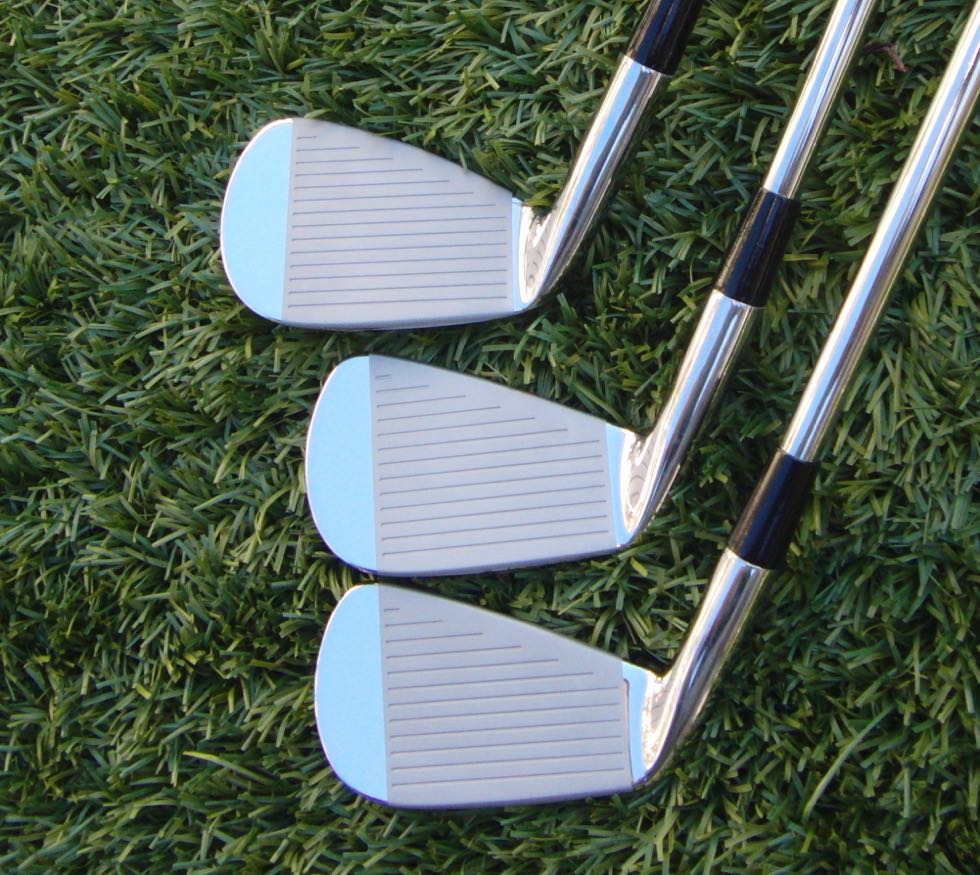 In the end I think the MP-15 are great set for a golfer in the five to ten handicap range who are looking for something more forgiving than the MP-4, but still wanting to get a iron with great feel and better player benefits. This said though, I do feel that many irons today are struggling to find differentiation and this iron is not all that different. It is a nice blend of both the MP-64 and MP-59 but I would not be compelled to run out the door to purchase these. If I was in the market for a set, these would be extremely high on the list, but they do not offer such an enormous differentiator that would cause me to run out and leave my old set in the dust. Mizuno’s reputation of building quality irons will remain intact with the MP-15.