Rickie Fowler has been an up-and-coming star for a few years now, but it seems his fellow touring professionals think he isn’t that good. Let’s take a deeper look at Dirt Bike Rickie.

The term overrated is overused. It has become a common terms used by sports talking heads when they feel that someone has been given credit they don’t deserve. I am not saying that some teams or players have not been given more credit than they’ve earned, but we overuse the term.

Rickie Fowler was recently rated as one of the PGA Tour’s most overrated players. He answered his fellow anonymous touring professionals by winning The Player’s Championship. Even putting this most recent win aside, voting him the most overrated golfer was misguided at best. I honestly don’t know if they watch the same tour that I do. How could they rank a guy with the highest finish in all of the majors last year overrated. I simply don’t get it.

Rickie probably hasn’t won as much as he should have. Until the Players win, he had only won once at Quail Hollow. That said, he has been right on the edge of greatness, particularly after overhauling his swing, in the last few years. He went to Butch Harmon to find more consistency and it really looks to be paying off. He was amazing in the majors last year and had it not been for the amazing second half of the year that Rory had, Rickie might be a two-time major champion. 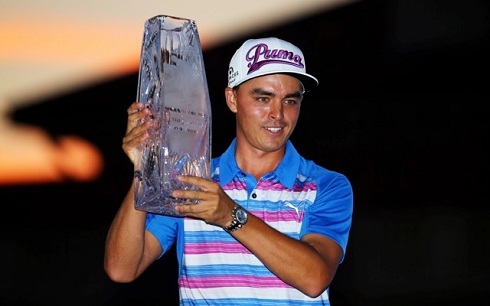 Now, overmarketed? This might actually be something that sticks. This is not Rickie’s fault. The PGA Tour is desperate for stars, particularly golf stars born in the United States. Rory is a big draw but he seems to have trouble drawing U.S. golf fans. This is probably something that doesn’t bother Rory, but it probably bugs the crap out of the marketing guys at PGA Tour headquarters. There is now Jordan Spieth, but he has just recently popped onto the scene, really only slightly over the past year. The marketing engine will start up on him, but the only other star that has a youthful appeal is Rickie. Dirt Bike Rickie.

Puma, his sponsor, will take every chance it gets to remind you he is the young and colorful face of their brand. Thankfully they seem to be moving away from commercials where he rides a dirt bike through bunkers and jumps over greens and now focus on him influencing old men to wear bright orange with caps designed for little leaguers. Yeah, the commercial is not great, but it made me smile the first time I saw it. It was at least creative. Hopefully now we will get more showing Rickie’s youthful style. All of this attention from sponsors and the PGA Tour itself might have some of the other golfers jealous could that be why he was voted the most overrated?

I think Rickie has made enormous strides in fixing his image while still keeping a young attitude. He has cut his shaggy high school prom hair and he now keeps his hat on right. Sure, it is still of the flat billed variety, but that has become more acceptable and now just exudes “young.” Turning the hat straight was a suggestion from Masters chairman Billy Payne. Rickie’s retort was that it allowed his fans to “see his face”. Since that lecture from the Masters Chairman I haven’t seen Rickie wearing the hat backwards in any of his interviews. I also see less of the full-out orange outfit on Sundays. He is still dressing with color and a youthful spirit, but gone is the orange jumpsuit where you couldn’t tell if he worked on a road construction crew or was trying to be the Oklahoma State mascot. All of these changes are a big plus in my book. It shows him maturing, still keeping his youth, but showing respect to the game and the fans that watch it. Color is great, and I wish more guys on the PGA Tour used it, but it can be overdone his old Sunday outfit proved that.

With the decline of Tiger and Phil, the PGA Tour, and even the companies who look to make money from golf like Nike, Puma, TaylorMade/Adidas, Callaway, Titleist… they are in need of stars. Golfers who will take the game from where it is now, post Tiger, and move the needle once again. When Tiger hit the scene golf went through some incredible growth and it needs a star, it looks like someone different than Rory, to take it to new heights. Nike has made a nice commercial showing the transition from Tiger to Rory but I think the golf world as of yet is not biting.

Now that Rickie has won twice it is likely that more wins will follow. This must have the marketing guys at the PGA Tour licking their chops. Rickie has proven that he can play under pressure as he did in the final round and the playoff at the Players, and also has proven to be a decent match play golfer in events like the Ryder Cup and Presidents Cup. A couple of majors and leading the US Team to victory in the Ryder Cup will have him being a big star in no time.

8 thoughts on “Is Rickie Fowler Overrated?”