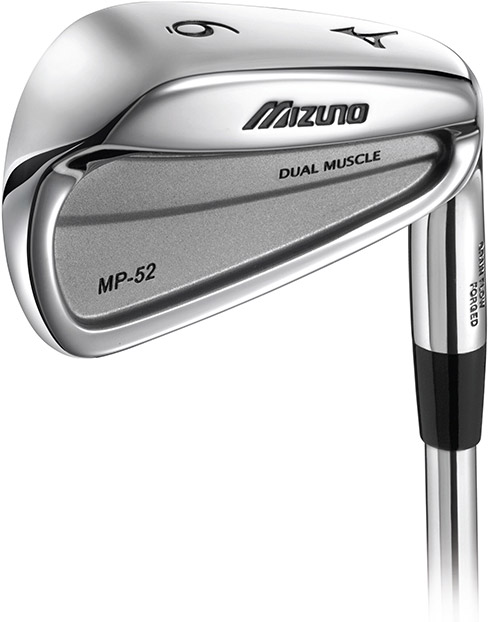 When the MP-52 debuted this fall with its sibling the MP-62, there were two surprises. First, the company’s “Cut Muscle” design of the last several years is missing, replaced with a very different “Dual Muscle” technology. Second, with the MP-52, Mizuno set out to make a more forgiving MP iron. The MP line has always been the domain of low and lower-mid handicappers. They have a reputation as being workable while providing a lot of feedback. Keeping up to those standards with a forgiving club is a bit of a tall order.

Consider that mid- and low-handicappers can be pretty finicky about their clubs. Many won’t play muscle backs because they think (probably accurately) that they need more forgiveness. Others won’t consider anything that isn’t basically blade-like, because they refuse to sacrifice feel and workability (nothing wrong with that stance either). Forgiveness and workability are to a large extent at opposite ends of the same spectrum. Creating playable irons that meet the needs and preferences of better golfers is a gutsy undertaking for a company with a solid reputation among lower handicappers.

But the MP-52s are not intended for the blade set, they are intended to attract those mid handicappers who have always felt that previous MP models were not forgiving enough for them. They are aimed at those who have played player’s clubs in the past, but now want a little more forgiveness.

Will Mizuno’s gamble pay off? Let’s take a look at its new easer to hit MP iron and find out.

Design and Technology
The MP-52, like its big brother MP-62, is a sharp departure from the “Cut Muscle” MPs (32, 57, 60, and 67). Though it sports a similar name in “Dual Muscle,” it’s really a different animal. The Dual Muscle technology gets its name from (appropriately enough) two new design features: an outer “muscle pad” that, according to Mizuno, moves the center of gravity lower and deeper to enhance playability and launch angle; and an inner “muscle pad” that is intended to provide the feel and the feedback that better players tend to seek. 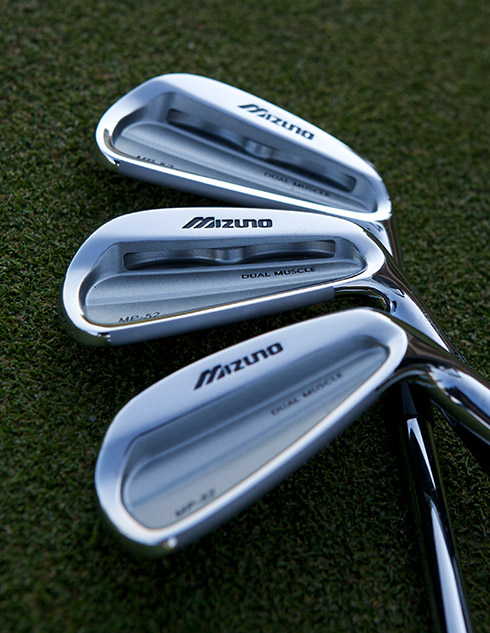 The MP-52s feature dual CNC-milled pocket cavities behind the face in the 3- through 7-irons. These two deep crescents allowed the designers to move 14 grams of mass to lower and deepen the COG further. These cavities look like they would hold two quarters each. Mizuno has opted for this dual crescent approach in an effort to maintain a solid feeling impact zone while bringing more forgiveness to its MP line.

Mizuno is known for its forged irons, and the MP-52s are intended to continue in that tradition. The clubs are “Grain Flow Forged” (Mizuno’s term) from 1025E mild carbon steel, which is then finished with double nickel chrome plating for looks and durability. Mizuno has given the MP-52s modified U-grooves. The rolled leading edge, cambered mid-sole, and agressively beveled trailing edge are designed to give the irons more playability from all types of lies while remaining true to their MP lineage.

Esthetics
Like all of Mizuno MP models, the 52s are clearly well made golf clubs. The chrome-plated heads are left relatively unadorned, a nice departure from the badges and other design flourishes that some manufacturers feel compelled to slap all over their clubheads. Aside from the Mizuno stamp on the back of the clubhead, there are also small “MP-52” and “Dual Muscle” stamps, but the majority of the space is chromed or satin metal. The Mizuno “Grain Flow Forged” stamp is located on the back of the hosel, as usual on clubs in the MP line, and the sole is stamped with the Mizuno roadrunner symbol and the club designation. All stamps feature black paintfill. 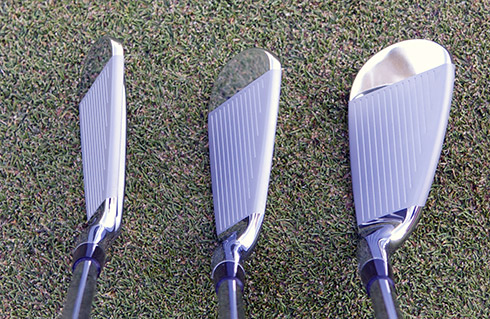 In appearance, the MP-52s resemble the hypothetical offspring of Mizuno’s MP-30s and MX-23s (older models that have both been discontinued for several years). A casual observer may believe these clubs are in the same “muscle cavity” family as the MP-62s, but a closer look at the 3-7 irons will reveal the more playable features of the clubs.

The playability features are noticeable, but just barely. The soles are a tad wider than on the MP-60s, though the beveled trailing edge helps reduce the perceived width. The topline is slightly thicker as well. The cavity pocket is less pronounced at address than those found on the older MX-23 and 25 models. At address, only a sliver of the milled pocket is visible behind the clubface with the 3-iron (although a forward press will bring the dual pocket cavities into plain view).

While I have to admit a preference for the Mizuno Cut Muscle iron appearance (as in the MP-57 and 60), the Dual Muscle models are good looking, nonetheless. The company has done a good job of including game improvement features in a club that still retains aspects of a player’s club.

Performance
Mizuno’s goal with the MP-52 was to create a more playable player’s club, and they were successful. The MP-52s are indeed the easiest clubs to play in the MP line.

Ball flight is higher than my MP-60s (which could in part be due to the differences between the MP-52’s Project X shafts and the MP-60’s Dynamic Golds). I could tell no real difference in lateral accuracy between the two MP irons, though the 52s did not punish mis-hits as much in terms of distance loss. Marginal shots still get the job done with the 52s, though you can tell when you haven’t caught it flush. 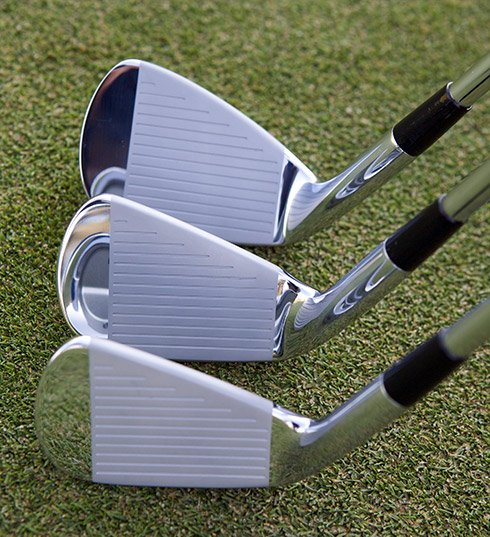 I found the MP-52 long irons to be very easy to hit, even easier than some game improvement irons I’ve played. The sole design worked well from all of the lies I found myself in. Shots landed with enough spin and angle to hold even the firm fast greens I was playing this fall. Even if I don’t end up playing an entire set of MP-52s, I’ll be seriously considering adding the 3, 4, and 5 irons to my bag simply because they make it those long iron shots so much easier to pull off than my MP-60s.

The shorter irons in the set are equally well performing, they just do not distinguish themselves from other clubs in the class the way the long irons do. The 6 and 7 irons feature the same dual cavity pockets that the longer irons do for added forgiveness. The 8-PW have the solid muscle pad to enhance workability in the short irons. The integration of these two club designs, though abrupt, is hardly noticeable in play. The clubs feel and perform very similarly, which is what you want in a set.

While forgiving, the MP-52s still provide clear feedback as to where contact occurred on the clubface. Shots in the center of the clubface are rewarded with the sweet feel of solid contact. It seemed to me that the very soft “buttery” feeling that Mizuno forgings are known for was harder to come by than with the MP-60s. In general, the MP-52s felt less harsh on near misses than the MP-60s, but the perfect feel seems harder to achieve. It seems that, perhaps, there is a trade-off for that forgiveness… not a severe one, but a tradeoff nonetheless.

For a forgiving iron, the MP-52’s are still reasonably easy to shape shots with. I experienced few problems moving the ball left or right with these irons, though if left to their own devices they seem to prefer a straighter shot. I found that to work the ball I only had to exagerate my setup slightly more than I would with the MP-60s. That’s to be expected from a more forgiving club.

Distance with the MP-52’s was the same with the short irons as with my regular set. With the long irons, however, I found that I could count on a few extra yards from about the 6-iron on.

Specifications
While the set I tested were fit with the Project X 6.0 shafts, the standard shaft options are the Rifle Project X 5.5 or the Dynamic Gold R300 or S300. The irons come with Mizuno/Golf Pride M-21 Round grips. A wide variety of shaft and grip options are available as custom orders.

One of the best things about using the custom option with Mizuno is the company’s readiness to allow the mixing and matching of clubs from various lines. You can easily create your own mixed set to fit your exact needs. 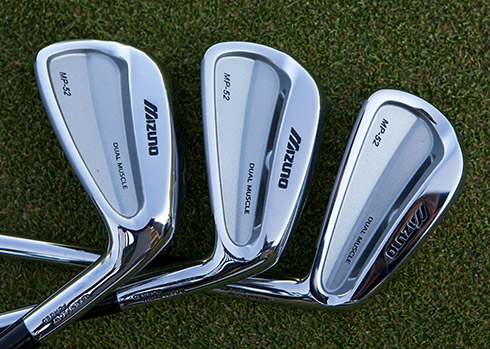 Both righties and lefties can enjoy the MP-52s equally.

Conclusion
Mizuno bills its new MP-52 irons as the most playable MP irons ever, and that seems to be an accurate assessment. One would have to look to the MX line to find more forgiveness, but would sacrifice workability in the process.

The MP-52s bridge the gap between the MX and MP lines. There’s an awful lot to like in these irons. The 52s give the MP line a new usability entry point that should appeal to a wider range of golfers than other models in the MP line. The irons should be forgiving enough to be played successfully by 20-handicappers, yet workable enough to be played by a 5-10 handicapper as well.

Golfers looking for a good compromise of workability, feel, and forgiveness will find a good candidate in the MP-52s.