The R9 are said to be longer, more forgiving, have a better feel, and be more workable than any other game improvement club on the market. Do you believe the hype? 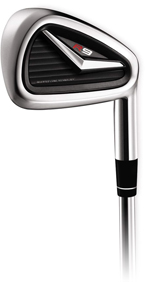 TaylorMade seems to have made it its mission in recent years to reinvent what the phrase “classic golf club” means. For example, they have taken the pear-shaped driver and morphed it into a geometrical tinker toy that looks both modern and classic at the same time. Now, their researchers and designers have turned their attention to creating a classic/modern iron.

Given the success of the r7 line, the expectations for the TaylorMade R9 line could not be much higher. Is it possible for a club to gain 10% of distance over the already long r7? Can the R9 improve its forgiveness while incorporating several characteristics of a classic golf club? Can a game-improvement club have a soft feel? Since the initial announcement, the forum has been buzzing with golfers interested in whether the R9s can truly live up to those expectations. Read on to see some the answers that I found to those questions.

Design and Technology
Like the r7, the clubface of the R9 uses the inverted cone technology on the inner side of the clubface for consistent ball speed on off-center hits. Using that as their foundation, the new R9 irons long and mid irons were designed separately from the short irons to optimize performance in each club.

The 3- through 6-irons house a fully enclosed, foam-filled compartment located directly behind the clubface and beneath the cavity badge. TaylorMade refers to this chamber as the “Velocity Control Chamber” because it is meant to create a higher launch angle, more power, and optimal feel. Moreover, the weightless soft feel foam allows the engineers to have an ultrathin (2.0 mm) face that wraps around the topline and leading edge. When the face flexes at impact, it is meant to act like a thin-faced driver and result in a higher CoR, faster ball speed, and added distance. 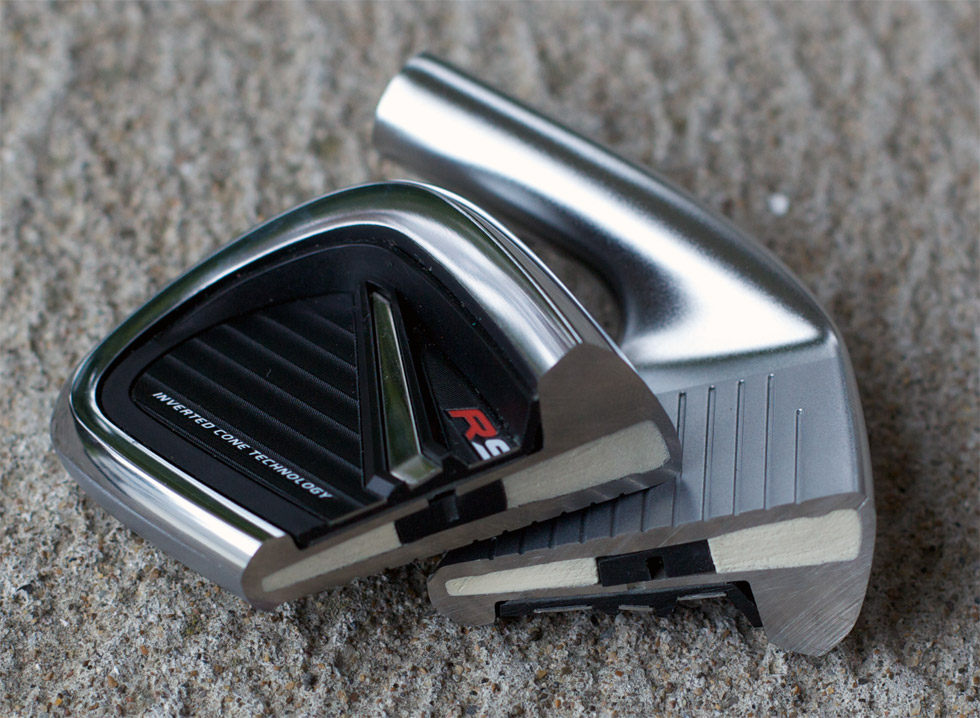 The virtually weightless foam originates as a powder that is sealed in this chamber, and then transforms into a foam substance after the clubhead is heated during production.

While the long- and mid-irons are meant to provide distance and forgiveness, the short irons are designed to increase feel and accuracy. The short irons feature a deep undercut cavity and a broad, low-CG sole which are meant to facilitate solid, spin-inducing contact. The teardrop shape and clearly delineated leading edge is meant to aid alignment. The R9 short irons also incorporate a vibration-dampening layer sandwiched between the backside of the clubface and the thin, protected black badge in the cavity as well as a visco-elastic adhesive made by 3M that is meant to further dampen vibration.

Esthetics
The TaylorMade r7 irons were a “supersized” iron that featured a thick topline, a wide sole, and some funky looking weighting in the cavity. While the look was unconventional, it was meant to provide the mid- to high-handicap golfer with maximum distance and forgiveness. Thankfully, virtually nothing of the esthetics of the r7 remains in the R9. 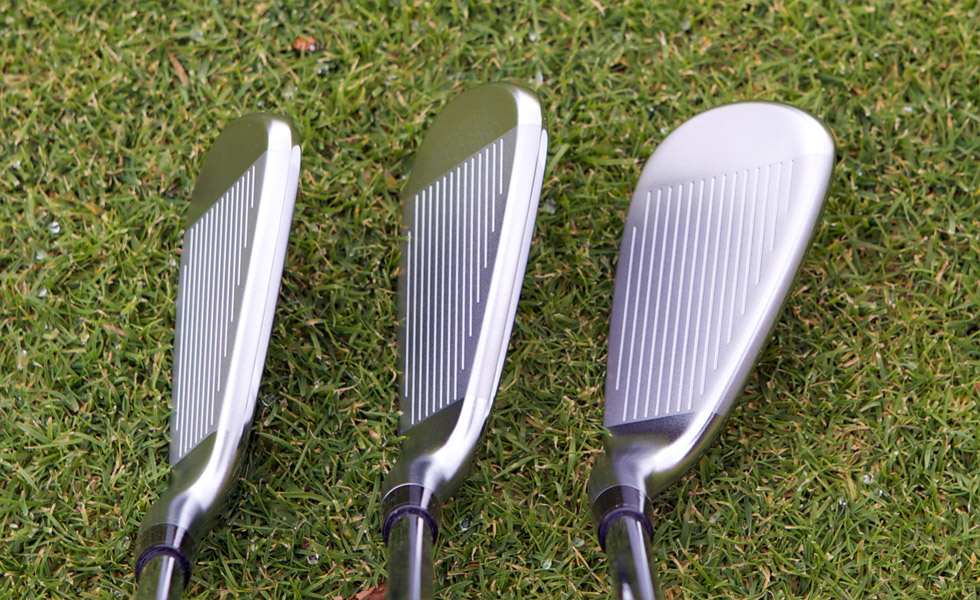 Other than the shear size of the clubface, the R9’s simple teardrop shape was quite pleasing at address. The nickel chrome-plated stainless steel and pearl finish gives the club a softer look than its predecessor. In addition, R9 has a clearly delineated leading edge and beveled sole which should inspire confidence in many of the mid handicap golfers that do not like the super wide soles of many of the game improvement clubs on the market. 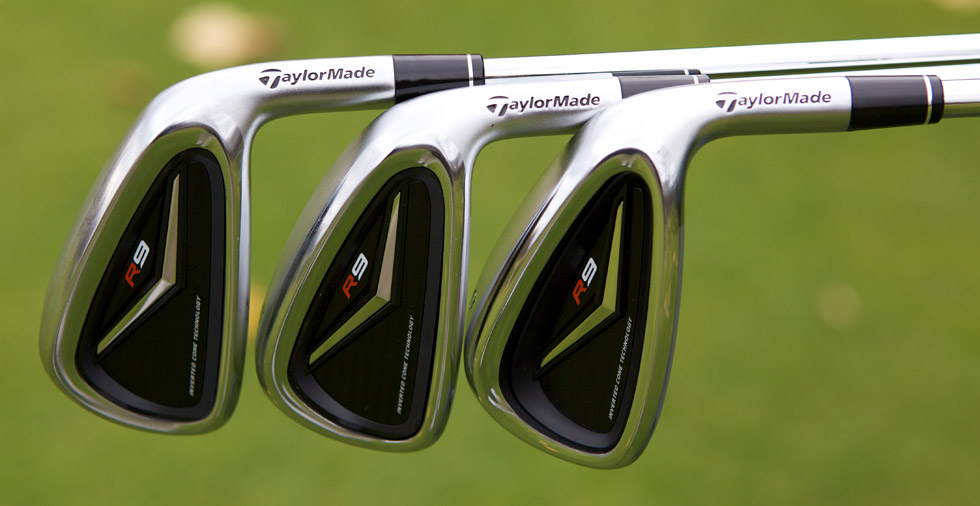 The cavity is likely going to be the difference between whether you love or hate the R9. In my mind, the difference between the R9 and the r7 was subtlety. The new R9 cavity highlights the Inverted Cone Technology with a chrome arrow which sits on top of many small black ridges. While in pictures this may appear to be as distracting as the r7’s graphics and tungsten weighting, in person the R9’s cavity is an understated compliment to an already good looking club.

Performance
The performance of the R9s defied logic. They are oversized, game-improvement clubs. They are meant to hit the ball long which usually means that you sacrifice feel and workability.

My first shot with the R9s came on course from about 195 yards out to an elevated green. Normally, I would pull out a 5-iron and take a nice, easy swing expecting the ball to fade just a touch and land on the green dead. I took out an R9 5-iron, took a nice, easy swing, and watched the ball land about five yards over the green. This trend would continue for the rest of my day; any time I hit a 3-, 4-, or 5-iron I found that the ball was traveling much farther than expected despite a very similar trajectory. The 6-, 7-, and 8-irons all seemed to travel slightly farther than normal but at least the ball was landing on the back side of the green. Needless to say, this was not my best round but it certainly demonstrated the length of the R9s. 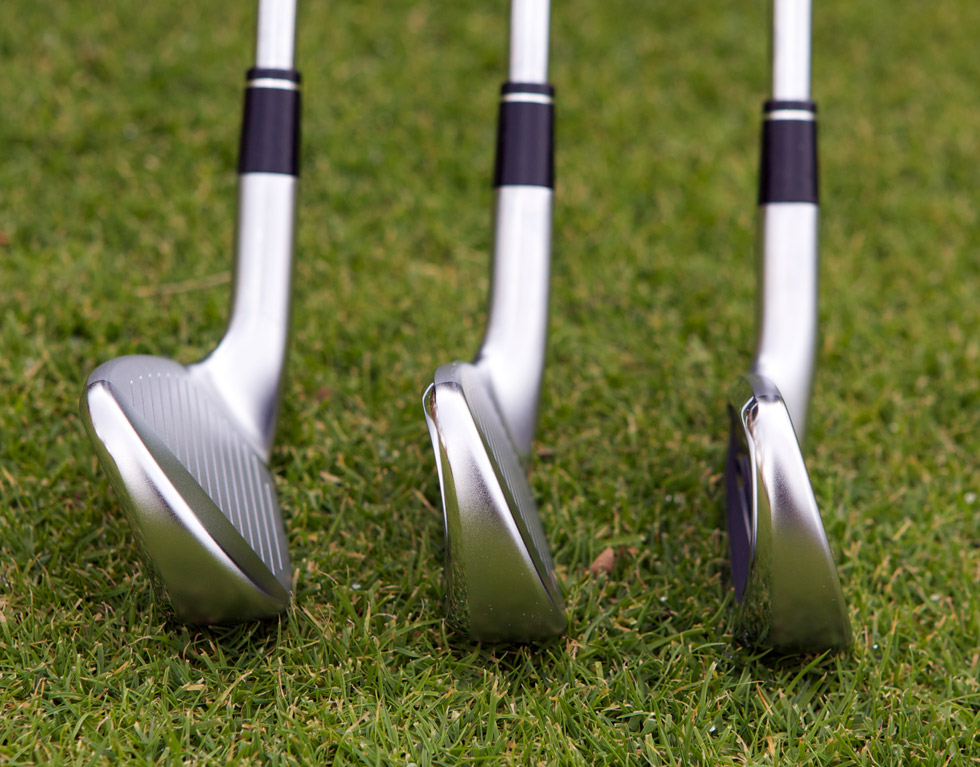 The length though was not the only thing that I noticed that day. Yes, the ball was going over the green with the long irons but I was able to work the ball pretty well for a game-improvement club. Moreover, the club generated plenty of spin with the short irons and given the high trajectory of the long irons, the ball never seemed to have trouble holding the green. Keep in mind, this is not the kind of workability or spin that you would expect if you were hitting a forged club, but the R9 does spin more and is more workable than any other game improvement club that I have tried.

The feel is a little bit deceiving though. Perhaps I am masochistic but I do not like when I cannot feel my mishits. The R9s have a consistently soft feel. When you hit the ball on the sweetspot the feel is just as you would expect it – soft and smooth. When you hit the ball off the heel or toe of the club, the feel is – soft and smooth? You can tell that you mishit the ball but you really need to pay close attention. I could feel where the ball hit on the face but when I asked mid to high handicap golfers to tell me where the ball hit the clubface before looking at the impact tape not one of them guessed correctly. 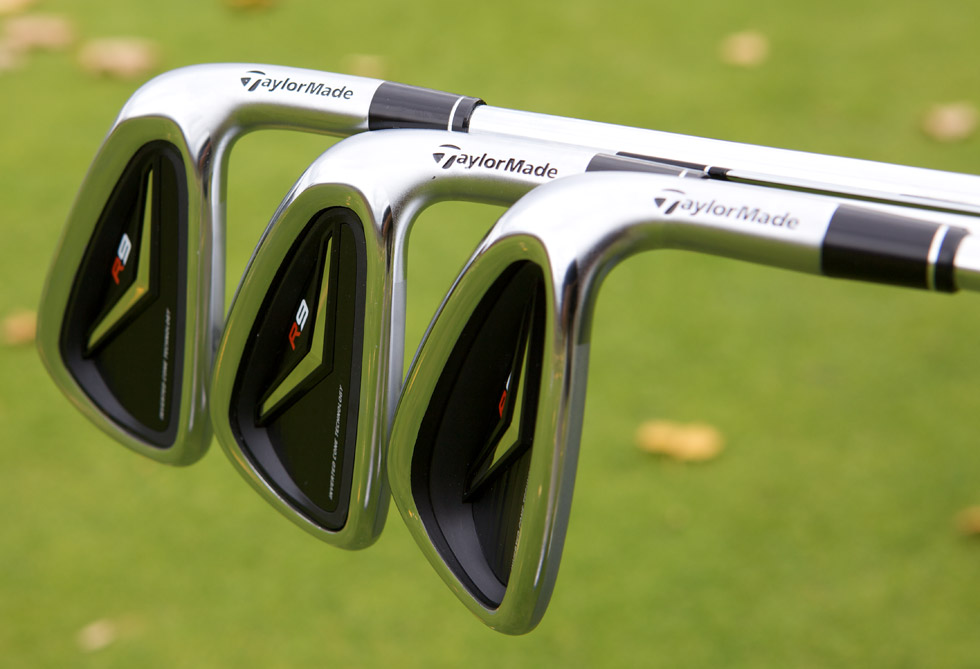 Needless to say, if the feel of the irons is this consistent across the clubface I was expecting the clubs to be very forgiving. As with every other test that I have done for the site, I grabbed a roll of impact tape and parked myself in front of a launch monitor for the day. Just to be a little more graphic, here is a summary of my results.

There is no doubt, the R9 irons are forgiving. Just to be sure, I wanted to see how the R9s forgiveness compared to the r7. After a couple hours of testing the r7s head to head with the R9. The results were pretty shocking.

Take a close look at the numbers above. The r7s are more forgiving than the R9s but a mishit on the R9 goes farther than the sweetspot of the r7. If you are confused, you are not alone. I had nearly a half dozen golfers hit the R9s and every one of them had identical results. More importantly, not one of the mid- to high-handicap golfers wanted to give the clubs back to me.

Specs and Extras
The R9 irons come standard with either the KBS steel 90 gram steel shaft (regular or stiff) or the Fujikura Motore graphite shaft (senior, regular, or stiff). MSRP is $999 for steel and $1249 for graphite. 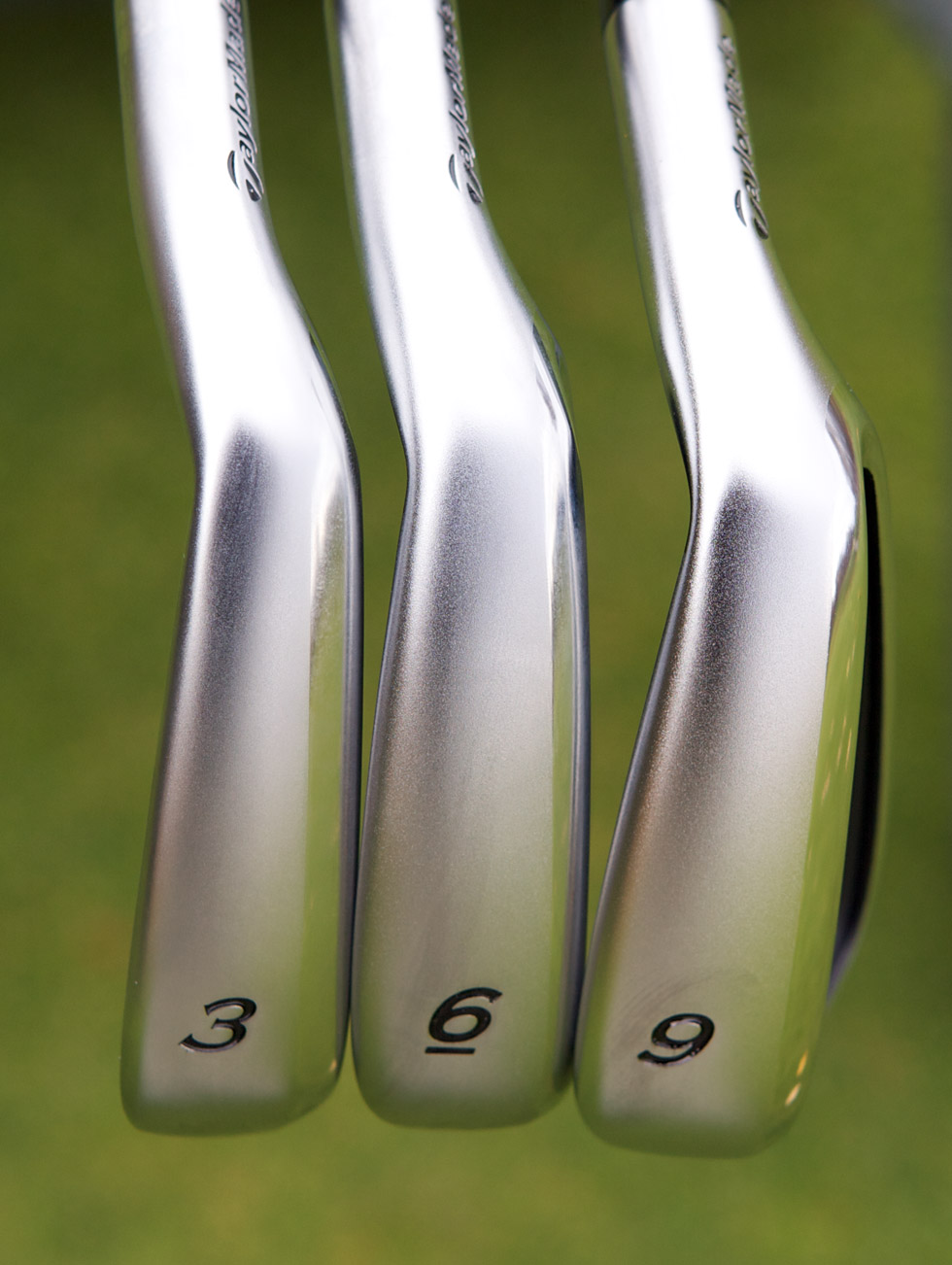 Standard specs for the irons are as follows:

Overall
The R9s performed above or beyond all my expectations. They are an oversized club that has feel. The long irons absolutely murder the golf ball and despite the slight drop in forgiveness over the r7 irons that came before, they are still quite forgiving. Moreover, the irons actually look good. If you are a mid- to high-handicap player, this is a set of clubs I would highly recommend.