Earlier I declared the end of the Phil Mickelson era in major championships, so what did he do? Go out and shoot the best round of his life, now it is time for me to apologize.

It is never easy to admit when you were wrong. When making predictions, especially about sports, one is bound to be wrong from time to time. A few months ago I declared that Phil Mickelson’s career in the majors was over.

Boy was I wrong. If Phil hits better wedges on the 13th and 15th hole at Merion, he may have won two majors and I would have looked really stupid. The 66 Phil fired at Muirfield was not vintage Phil Mickelson. It was what we have come to expect from Tiger. Exacting, skillful, and beyond all, clutch.

After the birdie on 17 I thought that because this is Phil Mickelson and he has a flair for the dramatic the 18th might be one wild roller coaster. At the time he had the lead but it was only by one. Anyone who has followed Phil over the years knows that no lead is safe. The U.S. Open at Winged Foot was the first thought that came to my mind. This time Phil was different. The birdie on 18 was clutch. It put the tournament away. Removed almost all of the doubt. There was no roller coaster.

Phil is proving that 43 is the new 33. That a career in today’s day and age is longer that it was in the past. He looks very fit and seems to be truly enjoying himself out there. Part of the reason I felt Phil was going to struggle at majors was because he seems to struggle with the driver. Lately he is experimenting with funky looking three woods in order to find fairways. But what I forgot is that if the Open Championship plays hard and fast as it did during that week that Phil’s plan of dialing back might turn into a strength rather than a weakness. Phil has always been a decent long iron player. Muirfield was so dry and hard that long irons were the best way to play the course.

My friend, who is a huge Phil fan, thinks Phil can still win a U.S. Open. I am suspicious. He may content at Augusta for a few more years with his length, but each passing year will make that tournament tougher and tougher for him to win. The Open Championship is a bit of a toss up because you just never know what the weather is going to do so consistently contending there will be tricky. The PGA Championship will require Phil to hit driver, and hit it better than he has been. The U.S. Open which remains Phil’s only tournament to win for the career grand slam will also be a tricky test without a driver he can trust.

That said, I actually find myself agreeing with my friend when I look at the courses that the U.S. Open will be played at for the next two years. Pinehurst in 2014, the last time the U.S. Open was held there Phil narrowly missed out on the victory when Payne Stewart made the putt to win there in 1999. So Phil will have really good memories there. I think barring any injuries he is likely to be right in the mix. Then in 2015 the U.S. Open goes to Chambers Bay which will have the U.S. Open looking like an Open Championship layout rather than a U.S. Open. Chambers Bay is a quirky course, one where the distance advantage is somewhat neutralized because of how hard and fast the course can play. The par threes are very long and will require precise long irons, for which we know Phil is pretty good at. One can expect Phil to be a factor during that week also. 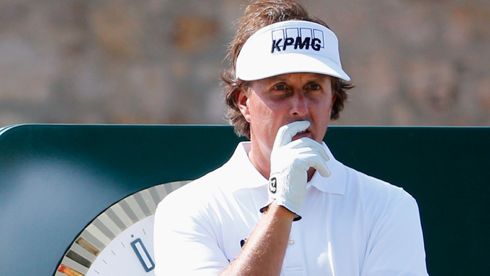 So all of a sudden Phil looks like someone who could win the career grand slam. Personally I don’t think that adding a U.S. Open will change my opinion of where Phil fits in history of golf. Six second place finishes, plus a victory in the other three majors puts Phil in the class with the elites. I am sure he would like to pull off the career grand slam, but sometimes when you want it too badly it makes it all the harder to get. Five majors in an era where your name is not Tiger Woods puts Phil in the poll position followed by Padriag Harrington, who with Rory seems a bit lost at the moment.

As I said in the original article, I would be extremely happy to be wrong about this prediction, and I am. Phil playing well is very good for golf. Now Tiger very close to his best and Phil at the top of his game we may get the rivalry we have always wanted from them. Rory has struggled figuring out his game and may take a few months or maybe even years to get things straightened out. In the meantime if Phil can challenge Tiger golf will be all the better for it.

2 thoughts on “Dear Phil, Sorry I Wrote You Off Too Soon”