Which 2008 Nationwide Tour graduates will be ready to contend on the PGA Tour?

There is still a month or so left in the 2008 Nationwide Tour season, but the standings are definitely starting to firm up. The top 25 golfers on the season-ending money list earn cards for the 2009 PGA Tour season. The golfers currently in the top 15 or so are pretty safe, although there will be a lot of shifting over the next four events.

The Nationwide Tour has been a stepping stone for some of the world’s best, and it has helped the overall quality of the PGA Tour in the process. Recent graduates who have gone on to make a big impact at the next level include Camilo Villegas, Boo Weekley, and Brandt Snedeker.

The 2008 Nationwide Tour class is very talented, and there are plenty of golfers capable of having great careers on the PGA Tour starting next season. I’ve picked out a few who should make an immediate impact next year.

While 2006 was a good year for de Jonge, 2008 has been a great one for the Zimbabwe native. In 24 Nationwide Tour starts this season, he has made 18 cuts and has 13 top-25 finishes. On top of that, he has finished in the top five a handful of times including one win, a second, and three third-place finishes. Right now, he is leading the 2008 Nationwide Tour money list with a month to go.

Brendon de Jonge had a taste of the PGA Tour in 2007, and that experience will help him in 2009. Add in the confidence he has gained from a great season on the Nationwide Tour, and fans should expect big things next year. He may not win any events at the next level in 2009, but he will be solid enough to keep his card for many years to come. 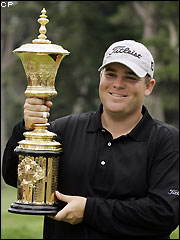 Colt Knost is a golfer I’ve followed since his college days at Southern Methodist University. To the general golf public, he is most well known for winning the 2007 U.S. Amateur Championship and U.S. Public Links Championship. After those wins, he had the chance to maintain his amateur status and play in all four majors in 2008. He decided to turn pro, however, and hasn’t looked back.

Knost has been a little inconsistent during his first year on the Nationwide Tour, making just 11 cuts in 19 starts. When he gets on a hot streak, however, he gets really hot. He has won twice this season and finished fourth on a separate occasion. He is currently 11th on the money list, and he is a lock to be a member of the PGA Tour in 2009.

Get used to Colt Knost because he will win some PGA Tour events in the future. He may not always be the most consistent golfer around, but that will improve with experience. He has always been a winner regardless of the level, and that counts for a lot in the game of golf. He has plenty of confidence in himself, and that will propel him to a great career starting next season.

Scott Piercy
Scott Piercy has played several Nationwide Tour events in recent years, but he is officially a 2008 rookie. He hasn’t played as many events as most of the golfers ranked inside the top 10, but he has definitely made the most of his time on the lower tour.

In his first nine Nationwide Tour starts this season, Piercy only carded one top-20 finish (T19). In the six starts since, he has two wins, a second, and a tie for sixth. While he has also missed two cuts, he has definitely found his stride over the past couple months. He is currently third on the money list and will be heading to the PGA Tour in 2009.

After checking out Scott Piercy’s Nationwide Tour stats from this season, it’s clear his game sets up nicely for the PGA Tour. He is fifth in driving distance, 27th in greens in regulation percentage, and ninth in putting average. Those numbers combined with his ability to finish will go a long way at the next level. Piercy definitely has a bright future and is capable of winning some tournaments on the PGA Tour.

The Final Say
I don’t watch every Nationwide Tour event, and I don’t know anyone who does. However, I find myself watching more and more each year, and I keep up with the standings very consistently. It’s fun to keep an eye on golfers who might explode onto the PGA Tour scene and be the next big thing in golf.

In case you are wondering, the next three Nationwide Tour golfers on my radar are Jarrod Lyle, Casey Wittenberg, and Brendon Todd. They didn’t make my top three, but they are all capable of great things in their respective future. They are all currently ranked inside the top 15 on the money list as well, and they will be heading to the PGA Tour in 2009.

It’s your turn to tell me what you think about this week’s article. Do you keep up with the Nationwide Tour on a consistent basis? If so, list some other golfers who might have a bright PGA Tour future. If you have anything else to add, please comment below or discuss them in the forum. Thanks for reading this week’s Thrash Talk!