Kennsington Golf Club is a great second-shot golf course, and if you can get over the somewhat bland driving, a great bargain at a good price.

The joke Alan and I came up with when arriving at Kennsington Golf Club is that we must have passed through some sort of warp door. We made a right turn off a crowded street, right between a Wendy’s and a Panera, then passed some dentist’s offices, and bam! We were suddenly in the middle of nowhere with a golf course stretching out for miles ahead of us. The attractive cart girl (is there another kind?) drove out to grab our clubs and we were off.

Kennsington opened in June, 2006 and has the potential to be one of the top courses in the surprisingly crowded Youngstown, Ohio area. The course is lined by construction (though the interior remain free of McMansions or any other houses) as large houses are being built at a good rate, and the entire area seems to be growing rapidly.

Read on to see what we thought of the golf course at Kennsington Golf Club.

Course Conditions
I’ve played my fair share of new golf courses. Among them, Grey Hawk had good conditions (but excessively hard greens with soft approaches) and one of my home courses, Whispering Woods, which started off in fair shape and has improved dramatically in a little over a year since it opened in late May, 2007.

The first hole at Kennsington is also the most heavily bunkered. Needless to say, my typical fade isn’t exactly the best shot shape here.

Kennsington opened in June, 2006. I’ve heard that the course has had some financial issues, so perhaps that explains the course conditions. It seems that all of the money was spent buying equipment used to build the golf course and none was saved for equipment necessary to maintain the golf course. Specifically, an aerator. I was told at the end of my first visit that Kennsington has yet to aerate the course, but was planning to do so for the first time “this fall.”

Certain areas of the course are in desperate need of this aeration. The soil is quite clay-heavy here as it is near me in Erie, and a heavy regimen of aeration and top-dressing with sand is in order. Due to the clay, drainage is an issue, and Kennsington seems to hold water like you wouldn’t believe. I played the course twice, both just after a moist but not even “rainy” evening (less than 1/10th of an inch of precipitation), and the course was soggy and had all over. Grass clippings clung to shoes and pant legs and clogged spikes.

An example of some of the “no grass where there should be” conditions can be seen here in the fairway short of the second green. Despite being open for over two years, Kennsington is still in need of a little more growing.

That’s not to say the course conditions are all bad. Though the greens lack the root structure you might expect to see after two years, they putted well and it appears most players take care to repair ball marks. The fairways had some bare spots, but where there was grass it was in good health and supported the ball well. The rough is thick and healthy, both greenside and bordering tees and fairways. Tees are in good health and offer nice, flat surfaces from which to start each hole. Some of the drainage retention ponds are a bit of an eyesore with dirt banks that need to be grassed over (or, perhaps even better, hidden from view with some flowering bushes).

Layout and Design
I’ve come to the conclusion that Kennsington is a bit of a “second-shot golf course.” I say this not because the course offers spectacular second-shot options, but because most of the drives are so bland. Oftentimes the landing areas are invisible, and when they’re not, they’re typically poorly defined. On virtually every two-or three-shot hole you’ll find yourself driving up or over a hill to an invisible landing area or to a fairway that lacks the definition a fairway bunker or some contoured mowing patterns provide.

Landing areas are fairly generous off the tees, and the course rewards good positioning off the tee, which makes the lack of visibility or definition all the more frustrating. I found it much easier to know where to best position my golf ball off the tee the second time around the course, but fear many people won’t be back after their first time to put their knowledge of the course to the test. 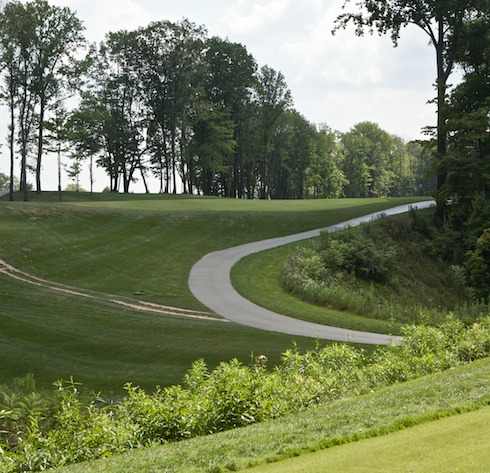 An example of the bland driving holes at Kennsington: sure, you know to hit the ball “that way” somewhere, but what awaits ahead?

In direct opposition to the bland drives, the second shots offer many of the elements of good golf course design. They are shaped and guarded differently, calling for and allowing a variety of shots to be played into them: high draws, low cuts, bump-and-runs, etc. Many feature small run-off areas or chipping areas, and the greens aren’t overly guarded by bunkers, featuring a good mix of fairway-cut grass, rough, and sand. A few greens have tiers and ramps, but these features are not overdone. Green size is often perfect for the approach shot’s typical length – smaller for short shots and larger for longer approaches.

Kennsington’s five par threes vary in length from 139 to 232 yards (with stops at 177, 186, and 207 yards in between), providing plenty of variety in club selection. The most beautiful and perhaps dangerous of these is the 186-yard seventh hole, which plays dramatically downhill to a two-tiered green with a steep hillside left and a watery ravine to the right.

Unless you bust an extraordinarily long drive at the 16th, you’re probably going to lay up with a wedge, then hit an even longer club for your third. Two of the four par fives at Kennsington present options like this, unfortunately.

The par fours vary in length as well: the ninth and eighteenth play to about 460 yards apiece, while some, like the second, play 382 downhill and others, like the 326-yard uphill 14th, are almost drivable from shorter tees. The second is a nifty hole, challenging players to hit more than a safe hybrid to get farther down a fairly wide fairway split deviously in half by a large tree.

Kennsington’s par fives trouble me a bit, and not just for the lack of exciting driving options. The 527-yard third hole presents a choice that’s repeated on several later par-five holes: go for it or lay up. It’s a common choice on par fives, but one that’s handled poorly twice at Kennsington. On that third hole, for example, the “layup” is often about 125 yards, leaving about 125 to the pin, or the carry is 240 yards. Par fives played with a driver and two wedges aren’t exciting at all, and most players don’t consistently carry the ball 240 yards.

The ninth tee at Kennsington is a bit of an optical illusion. The rock wall looks much closer than it is in reality – a 270-yard carry. Just hit it to the right, mmmmkay?

The 572-yard fifth hole requires as little as a hybrid from the tees, as my 3-wood rolled well beyond the end of the fairway and into a bit of a ditch before sweeping back uphill. Again, the second shot is interesting, but I feel taking the driver out of someone’s hands on a par five is a contrivance I could do without.

On the back nine, the 615-yard 10th is the most “normal” of the par fives. It plays slightly downhill and doesn’t present an illogical “all carry or wedge to lay up” choice. Unfortunately, that question is again asked at the 521-yard 16th, though it’s not quite as severe as the third hole and the hole plays downhill.

The ninth green is protected by water left with little bail-out area to the right. The green also has a bizarre rough-covered bump behind the green that can present some interesting challenges.

Kennsington’s fairway bunkers are playable, though some offer slightly penal lips if you get towards the front side of them on longer par fours, and some were downright deadly. They’re nothing to write home about – typical amoeba-like U.S.-style bunkers – but I will say that they seem to be placed at appropriate distances from the tees. On some holes, you’re given a choice between hitting 3-wood from the tee to stay short of the bunkers or squeezing a driver between them.

All told, and aside from the bland driving and a few silly “lay up with a wedge” par fives, Kennsington offers a solid test of golf. Positioning is rewarded in good balance with distance and power. The green contours are subtle enough and the greens fast enough to reward good putting and shot placement. Having played the course only twice, I can’t be certain you’ll “play every club in your bag,” but I believe you may be pressed into doing so at Kennsington.

Just make sure you play it a second time, as the shot placement from the tee will be so much more evident and your round that much more enjoyable.

Bang for the Buck
Kennsington offers a number of specials. As I write this review, it’s $25 to play on weekdays and $35 on weekends – a steal if I ever saw one. Even their normal summertime rates are quite low, and coupons abound, particularly if you sign up for their mailing list. The golf carts even offer a GPS system, adding to the bang for the buck.

The 13th green at Kennsington is one of the wilder ones on the course, with a large bowl. This par three plays 232 yards from the gold tees.

My only bit of advice? Don’t visit the golf course after a bout of wet weather. I’ve never enjoyed paying money to slog around a soggy golf course, and Kennsington seems to hold its water a bit too well.

Conclusion
Kennsington Golf Club needs two things to improve its status dramatically. First, it needs an aerification and maintenance program that improves and maintains the golf course conditions. Right now, it’s too soggy and there are too many spots where grass should be but isn’t. This is easily done, and I expect Kennsington this to happen sooner or later. 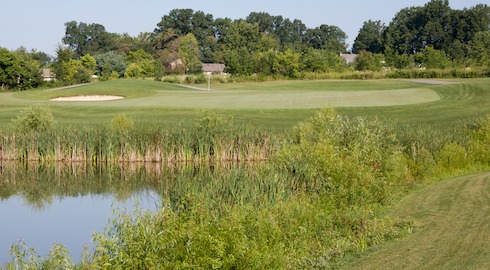 Kennsington makes ample use of water hazards on the lower holes, as seen here at the third and fourth greens.

The second is far less likely to happen – and to be honest, a far smaller complaint. I’d move a few tees on some par fives to restore the proper balance between the risk and reward of “go for it or lay up” and I’d either shave down a few fairways or add a little texture with some fairway bunkers, as something should be done to make the course a bit more playable off the tee.

Almost nobody will notice the second item. A few more will notice the first, but at $25 to $40, they won’t care. Kennsington offers a good test of golf – particularly once you get off the tee – and makes use of the area’s elevation changes, water hazards, general routing to ask you to hit (I believe) “every club in the bag.” Shotmaking is rewarded at Kennsington, as is creativity, and it’s a “fun” course for both skilled golfers and average players alike.

The putting green at Kennsington is large with tiers in good locations and enough flat areas that you can use it to both warm up and work on your putting stroke (though ideally not at the same time).