Justin Rose edged Jason Day and Phil Mickelson for the 2013 US Open trophy, but I explain why the real winner this year was Merion and the USGA.

Early in the week many people, including myself, thought that Merion was not fit to handle the length of the modern golfer. Sure, they had some extremely long par threes and a limited number of par fives but they had a number of par fours that measured under 350. On paper it looked like many of the pros could drive half of them. I for one thought the final score, especially after the poor weather they had prior to the tournament, would be lower than ten under. I was definitely wrong.

Merion’s winning score of +1 is almost exactly where the USGA would want it to be. I worried that the only way they could accomplish this on course with such short par fours was to trick up the greens and make the rough out of control. In my opinion Merion did have some tougher pin positions that the USGA typically uses. By tougher I mean pins with more slope than usual. Even some of the short putts had a pretty good amount of break and had many of the pros missing short ones. That may have been that Merion’s greens did not offer that many flattish positions because of how much slope they have, but we cannot be sure of this.

Recently the USGA has used a strategy of graduated rough. They made the rough varying in length depending on the distance from the fairway. The players have found this approach very favorable. I have not been a fan. For me, my memories of the U.S. Open are filled with very deep rough, most lies required a sand wedge out of them. It seems that the USGA dropped this approach at Merion this year. The pros didn’t need to venture far before finding themselves in very deep rough. This defense strategy kept most of the golfers from going for the very short par fours with the driver. The players knew that the risk of going for the green meant giving them potentially a very bad lie. I did not hear the players complaining much about the rough at Merion. Sure, they said was deep, but nobody was outwardly complaining it was unfair.

Merion had another defense that we don’t see that often at PGA Tour events, which Tiger found in the final round: OB. Tiger lost his drive on the second hole right it bounced on a road and went OB. It is pretty rare in this day and age to see a professional golfer go out of bounds. The OB stakes at Merion were all over the place and during the round I saw many a golfer including Steve Stricker and Jason Dufner hit one out of bounds. This is another aspect I would like to see the USGA do more of. In my opinion it is an enormous equalizer for distance if you place out of bounds so near to the fairways. Bomb and gouge could become bomb and reload. 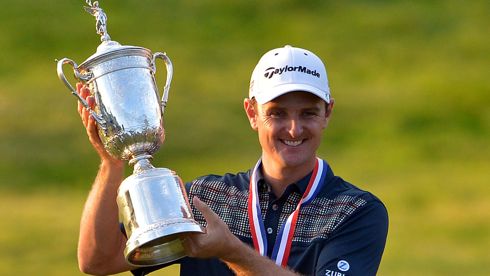 So the USGA got it right. Deep rough, slick and extremely sloped greens, and very nearby OB kept Merion in the game. I like this because I love traditional layouts like Merion. It would be great if this formula can bring even more courses back online that were thought to be too short for today’s game. Add to this, Merion has five of the best finishing holes in golf. When Justin Rose reached the last five even he had a lead the outcome of the event was still very much in the air. The last five were so tough that almost anything could happen. Merion has the potential for great drama.

Phil Mickelson who was mostly very happy with the layout did complain during the round that the par three third was a bit unfair at 274 yards. He and Hunter Mahan had trouble reaching the hole and Hunter hit a driver. The USGA quickly replied that the wind direction had switched on them, which is a very logical explanation of what happened. The change in wind direction is not something they could have prepared for so in many ways it is rub of the green.

In the past I have been very critical of the USGA. I thought, especially after what happened with Rory McIlroy at Congressional in 2011 that the USGA was bowing too much to the players complaints and moving in the direction of the PGA Championship. Congressional was a birdie-fest. They righted the ship at Olympic and in my opinion hit a home run this year at Merion.

3 thoughts on “This Year’s Winner of the U.S. Open… Merion Golf Club”