As the clock ticks, and he limps back into competition, the pressure to pass Nicklaus’s majors mark builds.

For the first three decades of his life, Tiger Woods had a mission, a quest, a number by which golf immortality has always been measured.

Jack Nicklaus’s 18 major championships set the bar so high, until Woods came along and declared that his singular focus in life was to reset that number to 19, if not well higher. It’s so outlandish, the thought of a young pro with as good an amateur record as golf’s seen since Bobby Jones talking about taking down Jack so early in his career, it redefines the word bravado.

But when Woods said it, when he described his bedroom shrine to the Golden Bear, when it became clear his father had trained him for this starting in a playpen, it became intriguing, and quickly it turned believable.

Now, almost as quickly as his bandwagon filled up, the believers are bailing. Now, what sounded like a given in 2009 is fodder for legitimate debate. It’s no longer “when will he pass Jack?” It’s become “will he pass Jack?” In fact, you can find plenty of pundits who wonder if he won’t be stuck at 14 forever. Some of the same ones who would have put the same odds on him winning zero majors in a year as winning all four.

The changes have come fast and furious. First, the meltdown with his personal life. Second, the ugly breakup with coach Hank Haney. Third, this nagging, lingering knee that’s cost him the better part of a year in the past. And most recently, his decision to venture on without Steve Williams, who stuck by his side through the darkest of days.

But the biggest change has yet to happen.

Before long, the number 18 will no longer be the beacon in the distance, where the journey is part of the adventure. It will become the burden he bears. The ghost that haunts him constantly, that casts a shadow on his remarkable career.

It won’t be the scandals, or the fan backlash, or even the knee that weigh him down. Before long, it will be that unattainable torch on the the mountaintop that looks so much further away with every moment he stands at a stall. 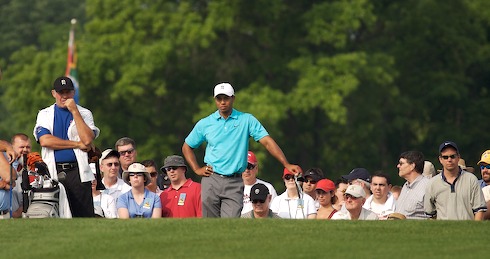 The bad news about Woods missing this year’s U.S. Open and British Open is less about two tournaments and more about the fact Tiger’s bottom seems to get deeper at every turn.

“I am extremely disappointed that I won’t be playing in the U.S. Open, but it’s time for me to listen to my doctors and focus on the future,” Woods said on his site before Congressional. “I was hopeful that I could play, but if I did, I risk further damage to my left leg. My knee and Achilles tendon are not fully healed. I hope to be ready for AT&T National, the next two majors and the rest of the year.”

As he gets off the couch and begins his comeback this week at Bridgestone, a venue he’s dominated unlike any other (he’s won there seven times), the questions about his health and his game will be front and center. Will now be the time it gets really interesting?

The only thing we love more than a hero is a beaten down hero. And the can’t-miss prodigy is novel at first, beloved as records fall, vilified at the first opportunity and celebrated upon their resurgence.

For the moment, Tiger Woods has enjoyed the upside of his success. He’s now quickly getting mired into the sort of funk that gets more punishing as it goes. If there’s a silver lining, right now he’s got an excuse. The knee is the reason he’s not winning. Not his inability to putt, not his ever-changing swing, not the loss of his aura. Blame the knee.

“It’s been a frustrating and difficult year, but I’m committed to my long-term health,” Woods has said. “I want to thank the fans for their encouragement and support. I am truly grateful and will be back playing when I can.”

But regardless of what’s got him a stall, the clock is ticking, and that haunting sound you hear is Jack, whispering “18” as he sleeps. As a 13-year-old, it kept him going. Before long, it’s going to keep him up at night.