In 2016 golf returns to the Olympics. I share why the Professional’s should not go and let the Amateurs play instead.

The 2016 Olympics are fast approaching. It will be here before you know it. I get the sense that most golf fans couldn’t care less. We have so many events to look forward to — mainly the four majors – and oh yeah, if that guy Tiger Woods ever comes back, that it’s difficult to find a spot in our minds for an event about which we don’t know much.

In some sports the Olympics are at the pinnacle. In track and field, swimming, and a number of others, winning gold at the Olympics means you are the undisputed king of that sport. For some others — boxing, for example – it is place where the up and comers can show off their skills before making it into the professional ranks. Sugar Ray Leonard and Floyd Mayweather, Jr. are the first the comes to mind for me.

Then there are other sports like basketball or soccer where the Olympics do not represent anything remotely close to the best that sport has to offer. Yes, the USA basketball team puts a bunch of professional players on the court but that is more closely related to watching a Harlem Globetrotters game than anything the NBA has to offer. I mean has anyone ever seen the Washington Generals win?

For starters winning Olympic Gold in golf will probably be a nice feather in a golfer’s cap, but it will not represent who is the best at that sport. So golf probably falls closer to the basketball version of the Olympics than the swimming version. Also with the professionals all slated to play it is not a proving ground à la boxing for younger guys to get their name out before making their way onto the PGA Tour. In fact, after the initial novelty of winning a gold medal for the first fifteen years or so wears off, I wonder if the pros will even care to participate in this event. There will be guys who want to represent their country with dignity, but I doubt it will have the same allure as getting a green jacket.

So my proposal is the tell the pros they’re out. That golf in the Olympics can only be played by amateurs. Now young guys especially from places that most golf fans don’t get to see will get their chance to shine like Sugar Ray Leonard or Floyd Mayweather Jr. There are of course other events like the U.S. Amateur, but that is typically dominated by young U.S. golfers. This will be like that, but only two representatives from the U.S. and a large number of internationals from all over the world. This will have a great deal of appeal and because it is amateurs like college football it leaves the door open for more upsets and unpredictability. 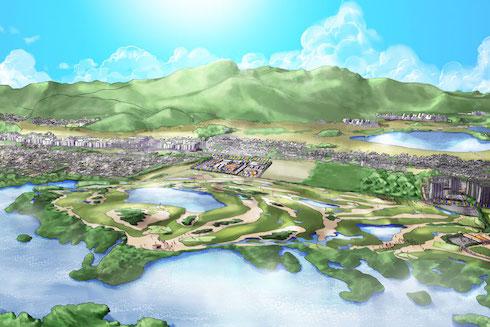 I get that everyone wants to watch the big-name pros go at it. But golf doesn’t work that way. How may times did Tiger and Phil go head to head? Very few. Once at Doral and once kinda at Bethpage, but for the most part golfers do not get to pick when they peak. So the idea that guys can tune their games to be playing their best on a particular week is silly. Otherwise every major would be a battle of the same guys every time. So with the current plan of letting the pros play we are going to basically get another golf tournament. Why not change it and let the amateurs for which the Olympics are suppose to represent duke it out.

My sense is that serious golf fans will watch no matter what. Had Tiger been able to play with his celebrity pull, that might have brought a few more eyes than a typical major. But without Tiger nobody but serious golf fans are likely to watch anyways, especially after the third version of the event. Since that serious golf fan is mostly what we could say is a captive audience lets take this chance to introduce that audience to young talented golfers from all over the world. Let’s bring these young golfers to the mix who’d otherwise never get their chance on such an enormous stage.

For basketball I know that the first “Dream Team” was exciting to watch. But now does anyone feel that it is any better than watching an NBA all star game? I for one could care less about how team USA does in the Olympics for basketball. In fact, the only real story is if they lose. It is my position that professionals, like NBA players, and PGA Tour golfers should not play in the Olympics and we should let the amateurs play. I know that I would watch.