An exciting new training aid designed to help the golfer during set up, the backswing, the downswing, and even chipping. Join me as I take the new Tour Angle 144 for a spin.

They say that there is a sucker born every minute, for me, that directly applies to golf training aids. I am drawn to them like a bee to honey, I just cannot help myself. With a garage full of them now you would think that I would have learned my lesson, but with the glimmer of hope that that next aid will be the key to longer drives and pin seeking irons, probably not.

When I was given the opportunity to review the Tour Angle 144 I was extremely excited to get the opportunity to try out a new and exciting training aid. I first saw the Tour Angle 144 at the place that I see most of the training aids that I am drawn to: Golf Channel. The commercial itself was not very clear on how it helped the golfer other than in getting them in the proper set up. Therefore I didn’t give it much of a second glance.

Once I was selected to do the review I did some more research and I was pleasantly surprised that it did more than just help the golfer in their set up position. Join me as I take a look at the very surprising device.

The Premise
Steve Bosdosh, a Golf Magazine Top 100 Instructor, invented the Tour Angle 144 after studying the angle between the shaft of great golfers and their forearms. He found that most tour players and good golfers set up with an angle of about 144 degrees. It was his premise that by setting up the golfer to have this 144 degree angle it would automatically put them in a proper golf posture.

In my own study of most golfers I found that the angle of 144 was not that far off for most good golfers. Yes of course not everyone fits exactly into this angle but it is not a bad rule of thumb. I am not certain that I totally agree with Steve when it comes to what is good golf posture, as from the videos that come with the tool show he likes to see the golfer with a straight back, as we have seen from our “Good Golf Posture” thread, that is not the case.

Even with all that said, the purpose is to help the golf set up to the ball with a good angle between the clubshaft and the forearms and the Tour Angle 144 does that. A golfer could still set up with extremely poor posture with the Tour Angle 144, but it is certainly tougher to do than without the aid.

The second benefit of using the Tour Angle 144 is to help the golfer with the one piece takeaway. During the first part of the backswing the golfer can start the hands back and continue to make sure that the Tour Angle 144 was still connected to your forearms until the club reached the nine o’clock position (from face on) in the backswing. This will ensure that the golfer keeps the triangle formed by both arms in the set up position, and keeps that triangle into the backswing. Having the aid connecting the club and forearm also ensures that the backswing keeps its width which is commonly suggested by teaching professionals.

The third benefit of using the Tour Angle 144 is to help golfers who cast the club at the start of the downswing and also to ensure that the hands are ahead of the ball creating forward shaft lean. Casting is a very common problem for beginning golfers because of the impulse that most of us have to hit the ball from the top of our swing. The Tour Angle 144 helps by providing the golfer feedback by stabbing them in the left arm if they cast. The golfer will get the feedback immediately once the casting occurs. Steve mentions in the videos included with the Tour Angle 144 that when the golfer casts he reaches his maximum speed before reaching the ball. By using the Tour Angle 144 the golfer can retain their wrist angles late into the swing and get the maximum speed closer to impact.

In addition to helping with casting, the Tour Angle 144 will help the golfer achieve forward shaft lean by helping to keep the hands ahead of the clubhead. If the clubhead gets ahead of the hands the red arm of the device will hit the golfer in the hands. So you can hit balls using the Tour Angle 144 and if the red arm of the device hits your arm or hands before you hit the ball you will know you need to make some changes in your swing. 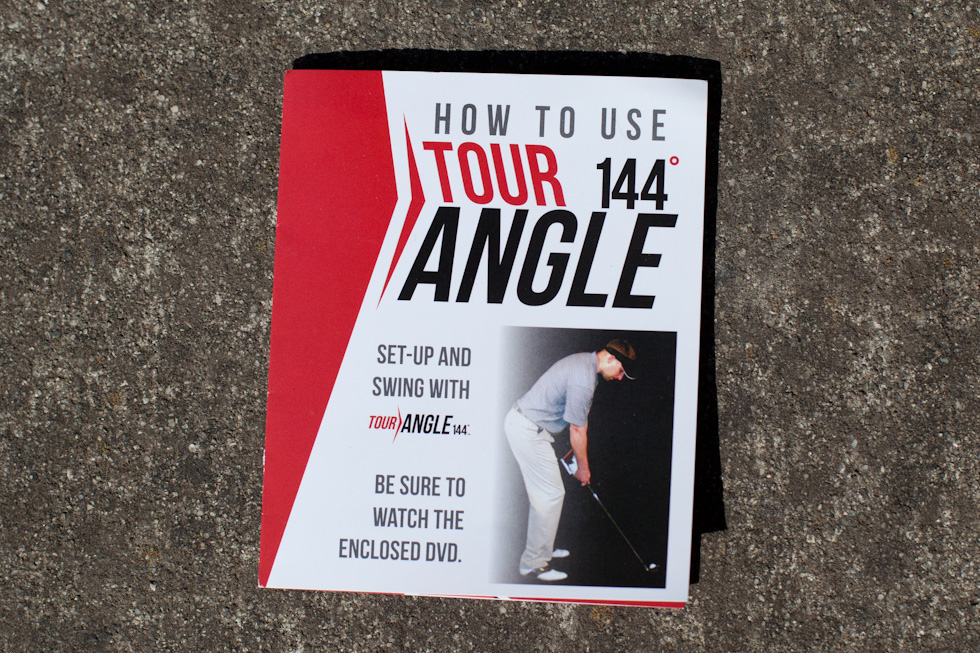 The pamphlet is great because it is small enough to take with you to the range. The pamphlet outlines the four main uses of the Tour Angle 144 so that you can consult it in your pocket while you are at the range. I wish that more training aids would come with this small informational pamphlet so that when I am practicing I can take a look to see if I am using it correctly.

The included DVD is easy to watch and very easy to understand. Much of the content of the DVD can be found in YouTube videos, but the DVD is more in-depth and offers a few additional tips that I couldn’t find in the videos on the web. The production quality of the DVD is not stellar, it seemed as though they were using multiple takes of the same message and intertwining them together but it was not done smoothly. It will not be winning any Academy Awards, but it definitely gets the point across of how to use the device. 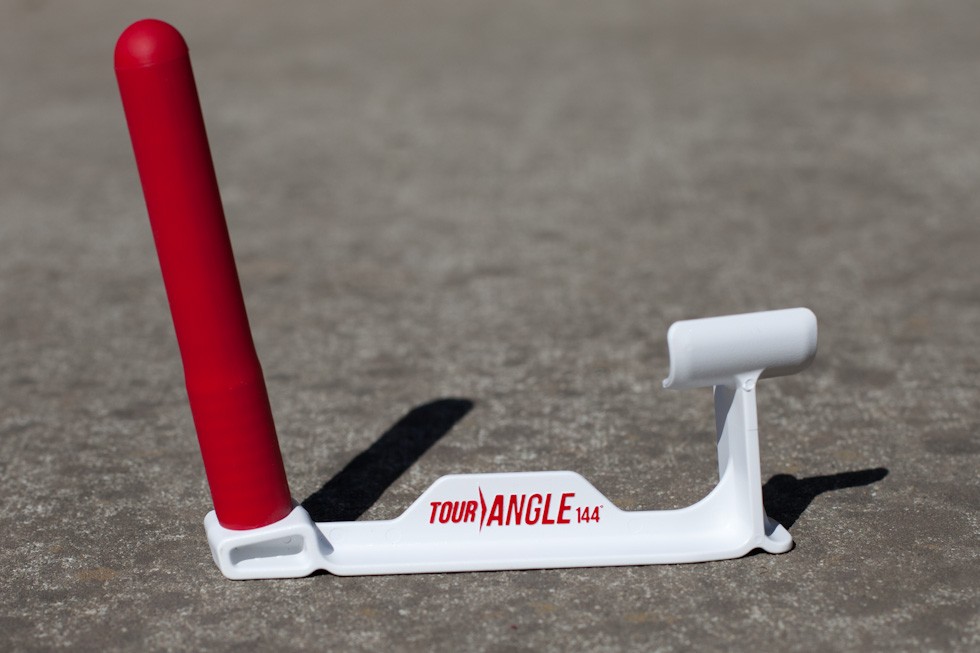 The Tour Angle 144 device itself is mostly made of very sturdy plastic. I think that they did a fantastic job in making sure the device was strong enough to endure the golf swing and not break. The red arm of the device is done in a very bright fire engine red and is a rubbery type of material. The tip of the red arm is very sturdy but seems to be done in a softer plastic because it is the part that will contact the golfers arm and may need to stab the golfer if any mistakes are made. 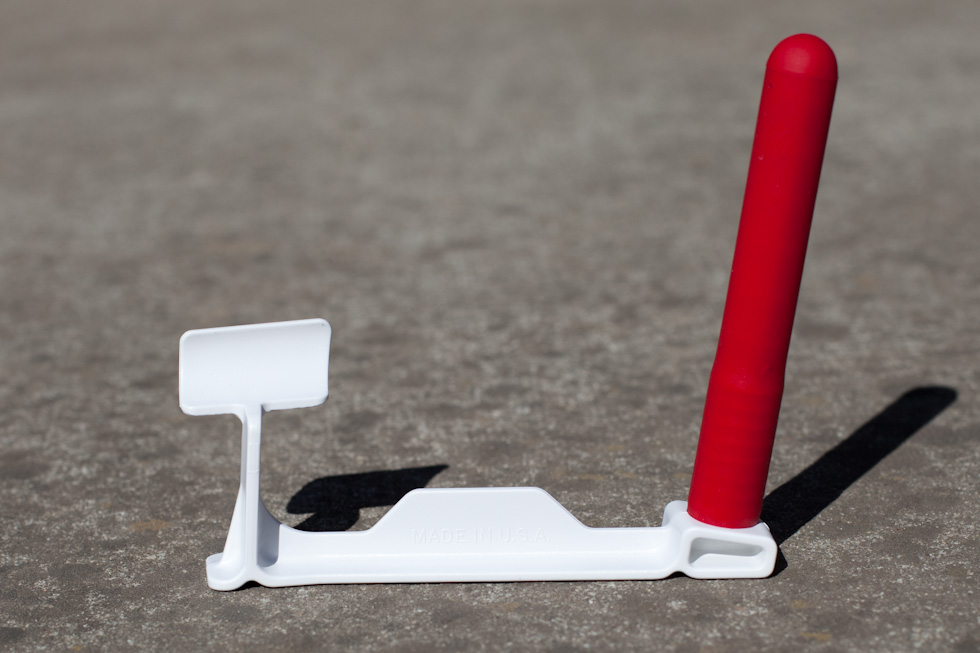 Once the device is in your grip it is hardly noticeable. This was a great design by the Tour Angle 144 team because if it felt too awkward it would be difficult to swing.

Tour Angle 144 In Use
As I mentioned above the Tour Angle feels very good in your hands when taking your grip. You will know it is there, but it is in no way intrusive. Another nice feature of using this device is it is not extremely easy to see a golfer using so you can use it on the range without getting a bunch of strange looks for using a strange training aid. In fact unless I was watching a golfer closely on the range I might not even notice they were using it. 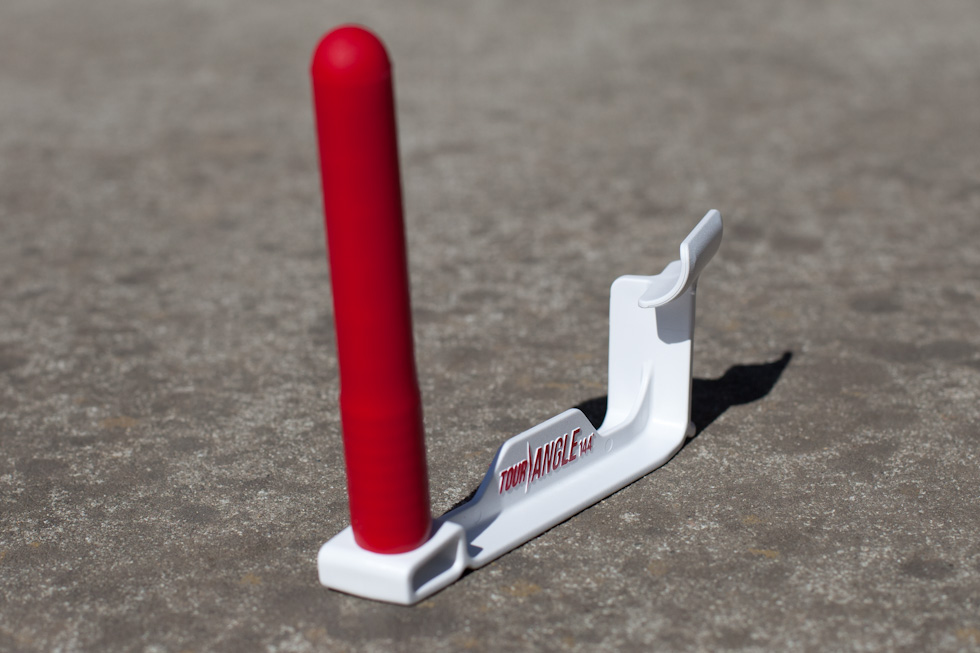 I am a big fan of using the Tour Angle 144 for help with the proper set up position. When I first started using the device I automatically realized that I had been setting up with my hands too low in my set up. I was quickly able to identify and correct this by using the Tour Angle 144. I don’t think it made any dramatic changes to my overall posture, but that may vary from golfer to golfer. For someone with an awful posture the Tour Angle 144 may really help them. 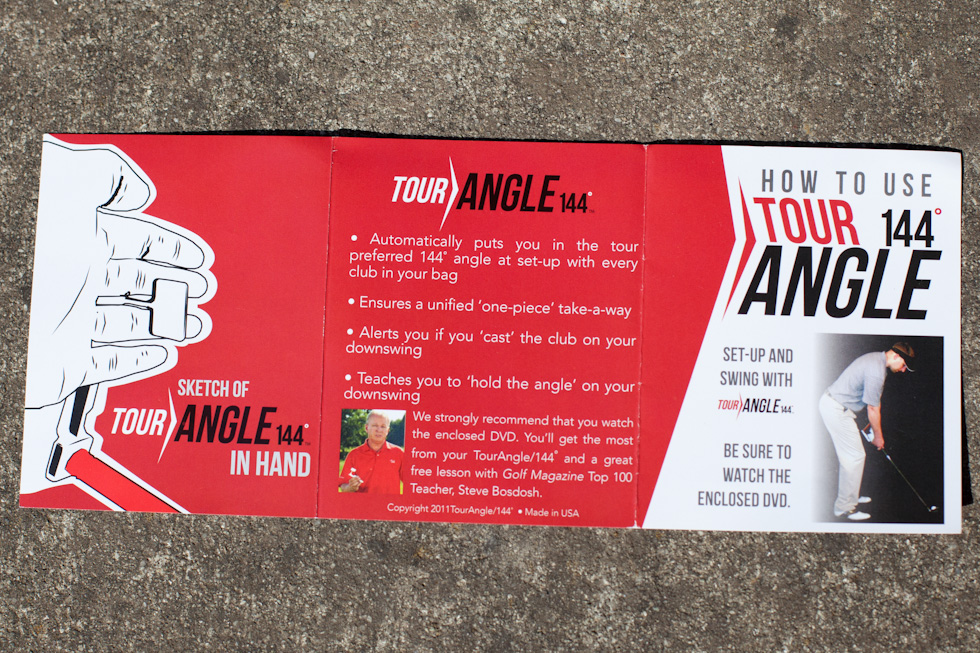 I cannot say that I am as big of a fan of the one piece takeaway that the Tour Angle 144 puts me in. It made me feel out of sequence with my overall swing. For a beginning golfer the device may help them to feel how the start of the backswing should feel, which could be really beneficial. Another area that the Tour Angle 144 could benefit certain golfers is if a golfer pulls the clubhead in too fast to start the downswing. This is a common fault that I see with golfers and by keeping the Tour Angle 144 and the forearm connect this may be reduced.

The downswing use of the Tour Angle 144 is the second best feature of the device. I love that to use the device properly a golfer needs to keep the red arm from hitting your hands and forearms to create proper shaft lean. To start out I hit half shots to get used to not hitting the red arm. Once I was able to master that I moved to full swings and it made it very easy to ensure I had the hands in-front of the ball. I could easily based on this feature alone make the case that this device is worth buying. There are a few other devices like the Taly which help teach golfers to create forward shaft lean, but they can be bulky and not easy to hit balls with. The Tour Angle 144 is discrete and can help you accomplish the same goal. I also think if I were casting this device would be great to prevent that as well. 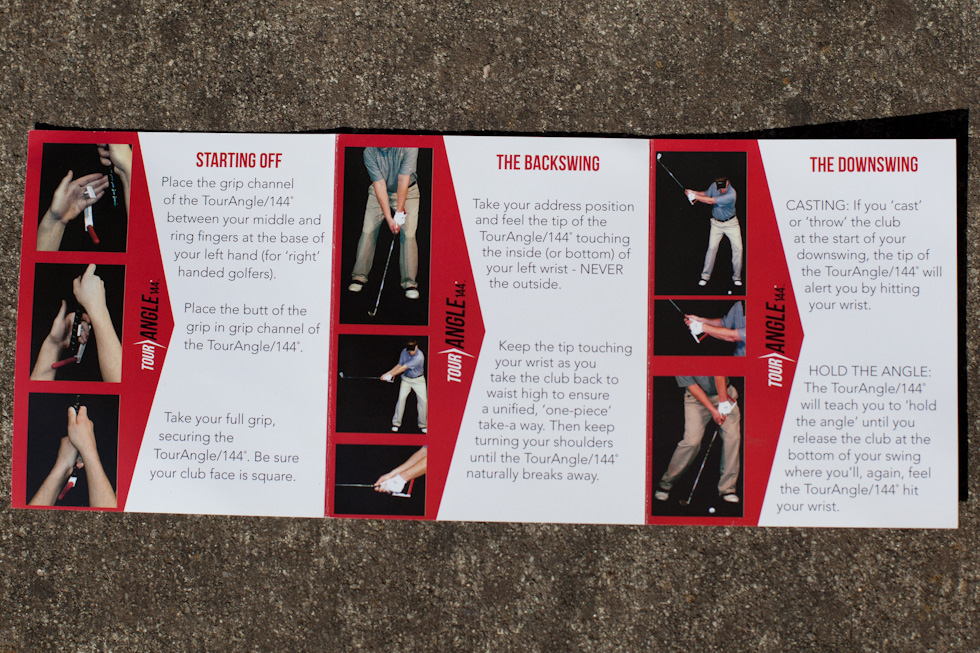 I did do a little chipping with the Tour Angle 144, but I felt it was slightly limiting in that regard because I could really only hit low chip shots. So basically shots that I had lots of green to work with because one cannot use much wrist movement in the shot. It does train the body to move, which is a good thing for golfers who are first learning to chip however. So a beginner might like to learn by using this aid. 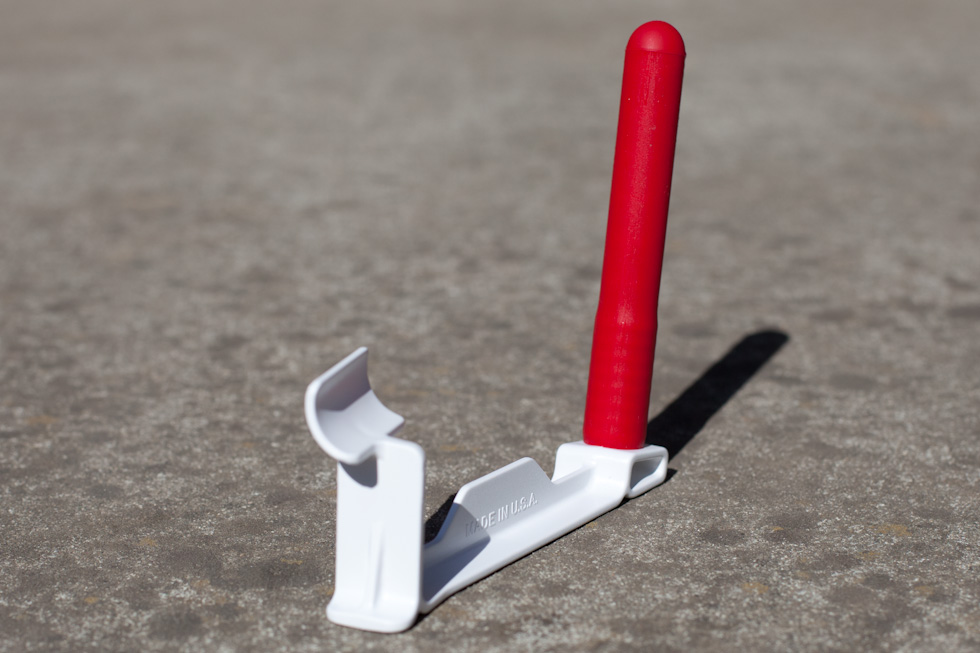 Conclusion
As far as training aids go this is one of the more innovative products that I have used. It is very easy to use and can be done while hitting balls which I think is always critical when using a new device. I really liked that the Tour Angle 144 focused on many different facets of the game like set up, backswing, downswing, and even chipping. At $39.95 I do feel it is a bit steep for what one might call a small piece of plastic (though that price does include rush shipping). I understand however that Tour Angle has been offering a discount to TST member so that may help to reduce the price to something easier to stomach. This being said though golf training aids to require a great deal of marketing and are rarely ever cheap. 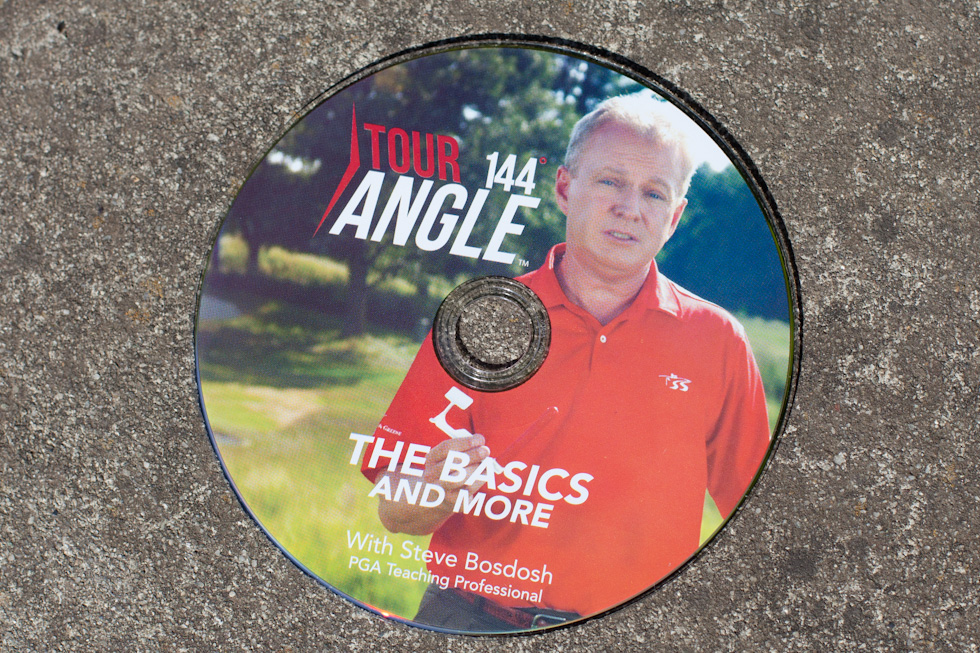 I would strongly recommend the Tour Angle 144 to a beginner. Specifically to work on set up and the downswing. I also think golfers that worry about casting or flipping the club could strongly benefit from the Tour Angle as well. If you feel you are flipping I think the device could really help you out.