Other than perhaps rolling a cart over, the greatest danger on a golf course is lightning. If you’ve ever witnessed a strike, you know the risk is real and deadly.

Most golfers know Retief Goosen’s story and some the tragedy at Hazeltine during the 1991 U.S. Open when one spectator was killed and five more were injured. A few may even recall when Lee Trevino and Jerry Heard were struck while sitting under a tree at the 1975 Western Open. Lightning is no joke.

I know. I lost a great friend to a lightning strike just this year. While it didn’t happen on a golf course, it happened 20 miles from my house. It was a heartbreaking and frightening reminder of strikes I’ve witnessed while playing.

That’s why a product I recently stumbled across while surfing the web seems like a must have, even if it is expensive. Here’s the story…

Be Afraid… Be Very Afraid
I don’t like lightning. I was 300 yards away when a bolt shattered a 40-foot oak and split it in two. I was even closer when out of a virtually clear sky lightning struck a tree and peeled the bark off as it spiraled around the trunk. In both cases, I never should have been that close.

The fact is that lightning is the most dangerous and frequently encountered weather hazard in the United States. Nearly 150 deaths and 700 injuries are confirmed each year. Nearly 20 percent of those casualties occur on a golf course. 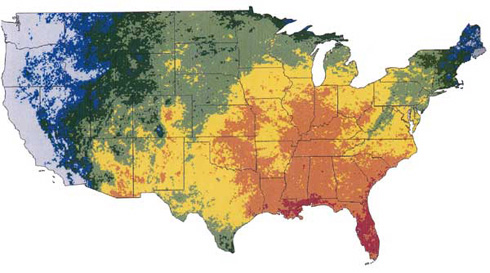 This map shows the probability of a lightning strike within a mile of your course’s clubhouse each year. Green areas average 2-5 strikes; yellow areas 5-10 strikes; orange areas 10-20 strikes; and red areas 15-30 strikes.

Unless you’re playing at a course equipped with lightning detectors and a warning siren, it’s tough to know when to take cover. Thunder can be heard only within a distance of about 2 to 4 miles. But the area of a potential strike can extend ten miles from the storm’s edge.

What’s even scarier is that lightning can, indeed, “come out of the blue.” More than 60 percent of injuries and deaths happen after it appears the storm has passed.

Thanks to liability lawyers who have managed to turn logic upside down in this country, many golf courses will never install lightning detectors because they don’t want to accept the responsibility and, thus, the liability. Consummate idiocy.

Thus, most of the time, you’re on your own. So while every golfer treasures their time on the course, there comes a time when you really, really need to get off it.

It detects electromagnetic signals from a lightning flash and then uses a microprocessor to analyze waveform and voltage levels. Between the advanced electronics and proprietary software, it can detect, identify, and track all storm activity within 75 miles of where you are. 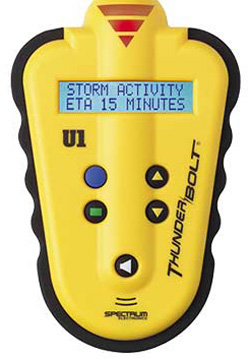 In addition to lightning, it can identify multiple storm situations and the presence of super cells or squall lines. Once a storm is detected it displays the estimated time of arrival to your location and then calculates when it’s safe to leave shelter.

The device communicates through text messages, flashing lights and a user-selectable audible tone. Basically it tells you of any storm activity and whether it’s headed at you. If it is, it counts down the miles and minutes as it approaches. Once it starts to move away from you, the ThunderBolt gives you the “time to clear.”

What I find especially amazing is that all this information is in real time. Unlike watching the Weather Channel’s radar images in the grillroom, this detector gives you specific storm data based on exactly where you are.

As with any electronic gadget, there are some limitations. It needs to be kept in either a vertical or horizontal position so its antenna is properly oriented. Oddly, even their top of the line model isn’t waterproof, only water resistant.

Sadly, this seemingly great technology does not come cheap. There are three models it would seem most suitable for golfers. The least expensive is the ThunderBolt PRO that goes for $429.95 plus shipping for a U.S. version and $479.95 for a metric version.

The ThunderBolt Storm Chaser is water resistant and runs $479.95 for a version programmed in miles. A metric version is $529.95.

The top of the line is the ThunderBolt Utility shown here that is also water resistant but appears to come with more accessories. It’s $599.95. This and the Storm Chaser model have an external connection port for remote warning accessories.

All three models can be purchased from the site that contains more information on lightning than you might ever want to know.

In the End…
While it’s certainly not as sexy as a GPS range finder or a new driver, it could be argued the ThunderBolt is even more important. If you golf regularly with a foursome, maybe you could split the cost four ways. Then too, Christmas is just around the corner. Maybe Santa would consider a potentially life saving stocking stuffer just the ticket this year.

1 thought on “A Lightning Detector You Can Carry”