The third major release in Adams Golf’s Speedline series of drivers and woods has for the most part stayed true to what has made the previous iterations a success: increase clubhead speed via the reduction of air resistance. Upon visiting the product page for the new Speedline FAST 10 driver, you may be led to believe that the page could double for that of a sports car or airplane. Technology such as FEA simulation, CFD analysis, and the use of a wind tunnel may have seemed outlandish years ago, but when you think of ways to get the most of your power transferred to the ball, it only makes sense to reduce the effect of those forces that slow your club down.

Let’s take a look at the latest from Adams – and all the technology they’ve put into the clubs.

Speedline Drivers
Adams relies on simple physics and aerodynamics in an effort to help the player swing the club faster. Makes sense, doesn’t it? In fact, Adams has done such a good job with this concept, the new 460cc FAST 10 driver has 10% less drag and turbulence than any other previous model. The end result is a driver head that cuts through the air on the downswing faster and more efficiently, producing up to 15 yards more carry distance than before. This design results in less of your energy being wasted on pulling the club through the resistance of the air, and more of it being transferred to the ball. The face area has also been expanded 17% and features a larger sweet spot than previous generation’s Speedline models.

In order to reduce that drag and improve the efficiency of the club’s movement through the air, the head of the FAST 10 driver underwent a 100% increase in toe curvature and a 300% decrease in heel curvature. On top of the aerodynamic improvements, the new Speedline driver also has a 10% increase in MOI over previous models, making it the most forgiving Speedline driver to date. 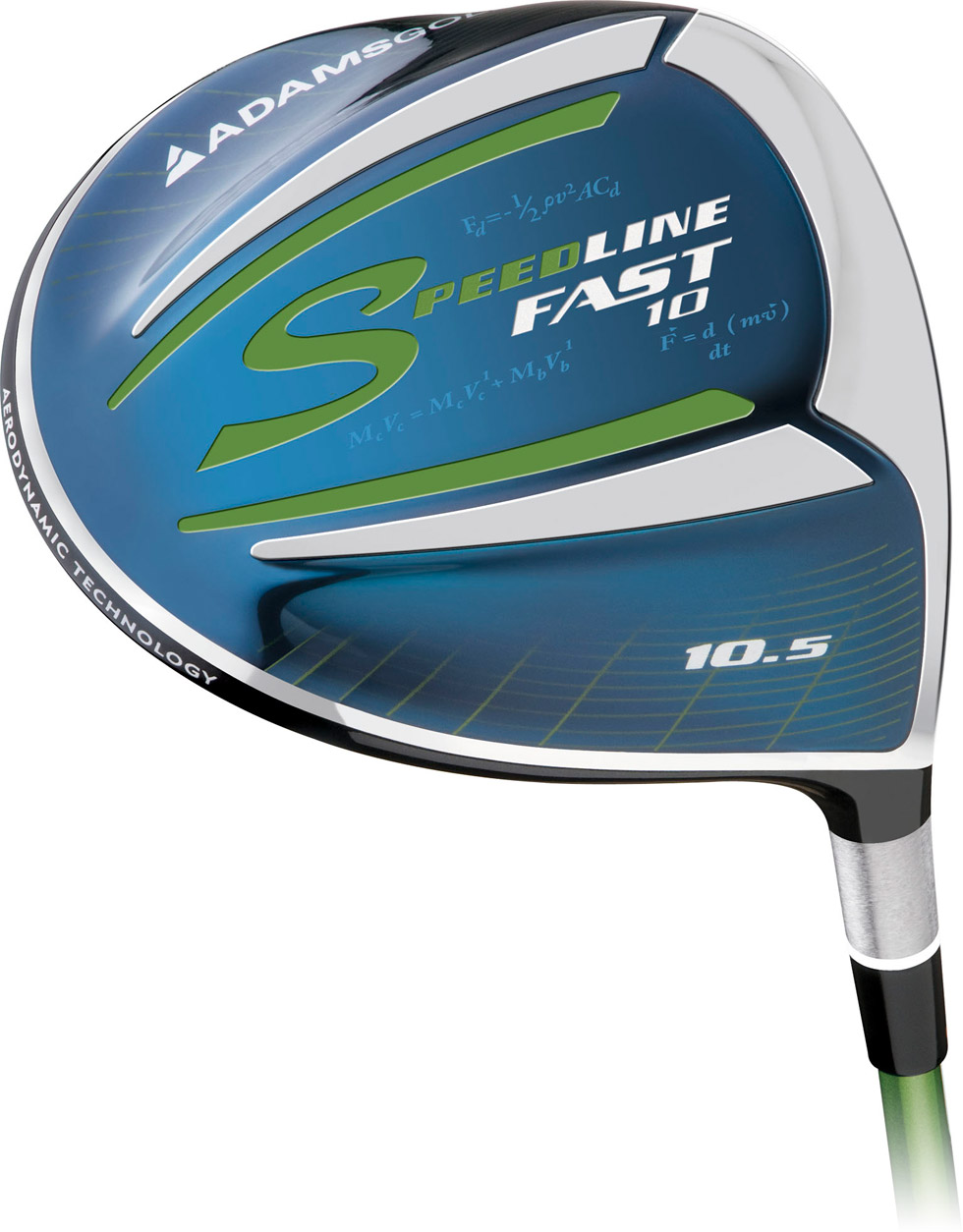 The sole is particularly busy, with various equations decorating the bottom, along with Speedline FAST 10 graphics, grid-like graphics extending from face to back on the heel and toe sides, “Aerodynamic Technology” decorating the back bow, Adams Golf on the toe side, and the loft on the heel side, all on top of a blue base. Luckily, the distracting graphics are not seen at address, where the Speedline FAST 10 driver maintains a very traditional, clean, pear-shaped appearance.

The President and CEO of Adams Golf, Chip Brewer had these comments on the FAST 10 lineup:

The success of the Speedline series clearly shows that the benefits of a driver head with aerodynamic shaping which delivers increased distance has resonated with golfers of all playing abilities. Now, with the launch of Speedline FAST 10 as the third-generation of this technology, we have furthered our lead in this exciting new category of drivers.

Four lofts are available, ranging from 8.5° to 10.5° and a 12.5° (in one degree increments) model. The FAST 10 is pretty long in terms of overall club length at 46.125″, and may be a little longer than some like. All lofts have a lie angle of 58° and a swing weight at D2. Adams gives you two stock shaft options; the Aldila Wasabi 60g and the Matrix HD 60g, both of which are available in flex profiles ranging from A- all the way up to X-Stiff. The standard grip is the Adams Tour Velvet on all models except for those with the A-flex shaft, which is topped off with the Winn Grip G8. A multitude of custom options are available from Adams, including shafts from manufacturers such as Aldila, Graffalloy, UST, and others. There is also a draw version available for those looking for a closed face. MSRP is $399.99. 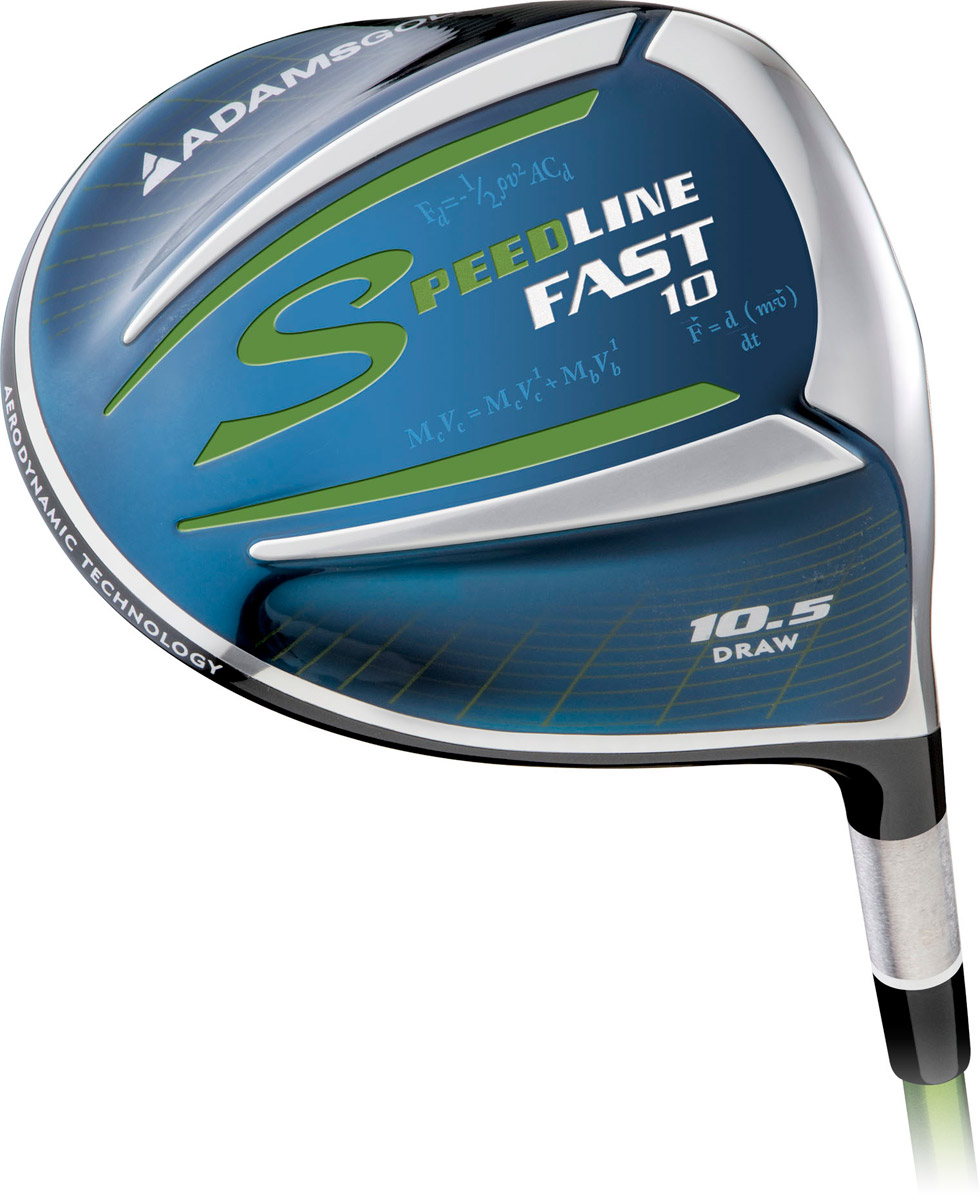 Fairway Woods
When looking for a fairway wood, versatility is normally one of the key qualities you’re probably looking for, as you’ll be hitting if off of both the tee and the turf. Adams concentrated on that playability factor with their new fairway woods by the strategic placement of weight pads and a 57% increase in sole camber. The weight pads are placed in the various locations around the head to help golfers with various swings. In the standard model, the weight pad is located in the back of the head, which helps to produce a higher launch. The other variation, a draw model, locates the weight pad near the heel. The FAST 10 fairway wood also makes use of a precision milled sole plate to optimize the center of gravity. 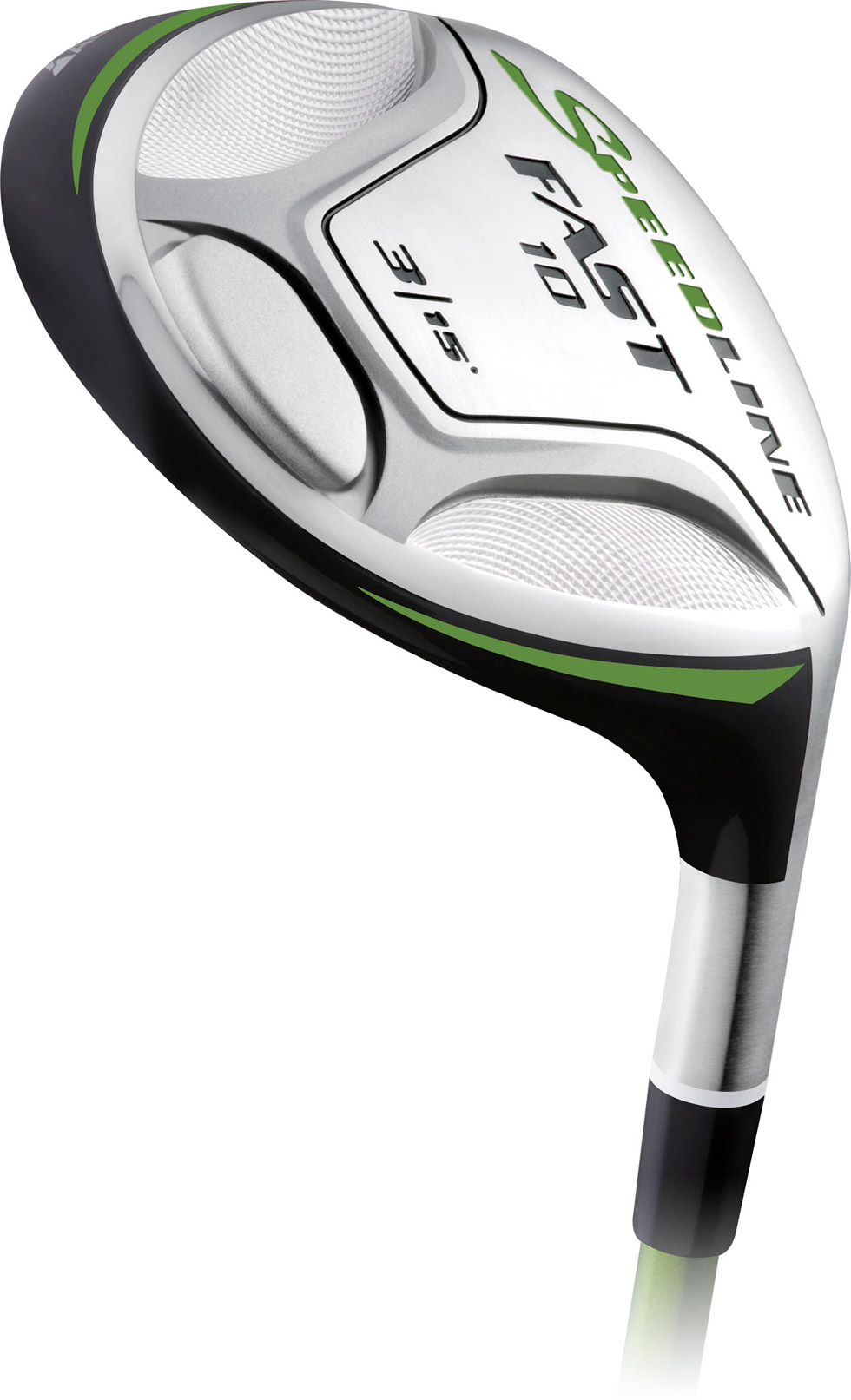 Again, like the driver, the sole of the fairway wood is a little busy, but not to the extent of the driver. Though the crown keeps a clean appearance, the sole is decorated with Adams and Speeline graphics, as well as web-like sections on the heel side and rear of the head. 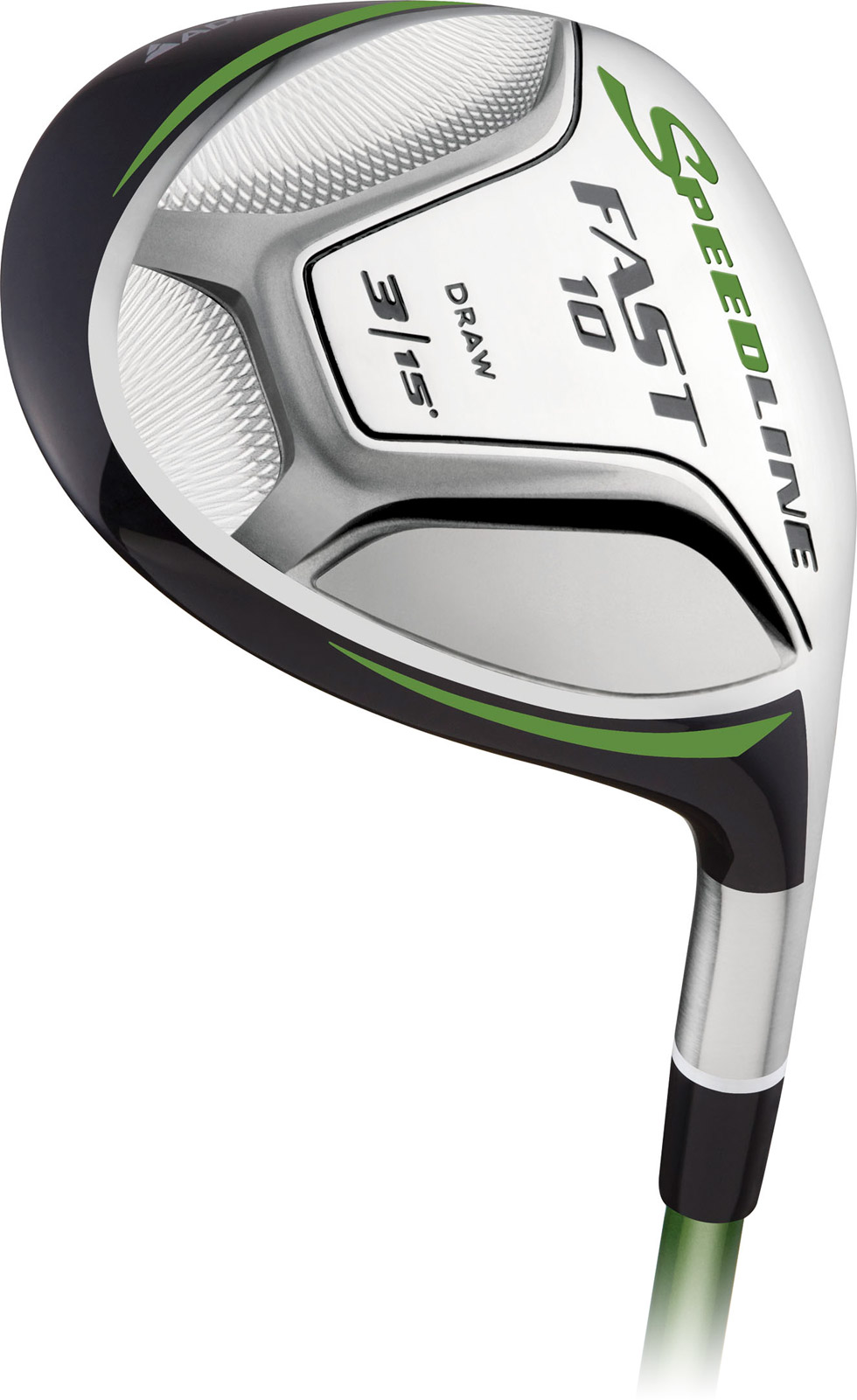 Final Thoughts
It really looks like Adams has another winner on their hands, as the recently released Golf Digest had the FAST 10 driver listed as one of its gold medalists. Sure, the soles of both lines might be busier than others on the market, but that’s irrelevant in my book. You don’t see the sole when you’re standing over the ball at address. Performance is what matters, and for those of us looking to squeeze ever mile per hour out of swing (under control, of course), the Speedline, and all of its aerodynamic enhancements is worth at least a demo.