Case in point: This isn’t a return to “V” grooves as is widely being reported.

Last August the USGA, golf’s governing body in the United States since 1894, announced that they were enacting new regulations for grooves in golf clubs effective January 1, 2010. This change came after a fairly exhaustive study that was spurred on by the lack of correlation between driving accuracy and success on the professional tours of the world. In other words, the USGA didn’t think “bomb and gouge” was the way golf should be played.

The rule applies only to certain clubs in the hands of certain players at and at certain times, so there is a lot of misinformation out there about what is really going on with this rule. This week, we take a look at it and set the record straight.

Brief History of Grooves
Prior to 1984, golf clubs had what we now refer to as “V” grooves. As the name implies, the grooves were shaped like a V. In mid-1984, Ping introduced the second version of the Eye2 irons which featured “U” grooves. The USGA outlawed them, a lawsuit followed, and to make a long story short: U grooves or “box” grooves were allowed to stay. Then Ping took it up a notch with the square groove. I bet you thought a square groove was the same as a U groove, didn’t you? The design was the same except that Ping modified the groove with a small radius on the corners. This change reduced the distance between grooves but didn’t change the actual width of the groove.

Other companies adopted a similar style for cutting grooves into their irons. The days of the flier lie came to an abrupt end, and players were spinning the ball back from the tall grass and cabbage with regularity. Fast forward to August 5, 2008, and the USGA announces that they’re changing the groove regulations on the pro tours effective January 1, 2010.

Common Misconceptions
Let me be clear about this first one, as it’s the biggest misconception out there. A lot of people believe the USGA, with this rule change, is banning square grooves. This is not the case at all. In fact, it doesn’t govern what shape the grooves can be any more than the current rule that’s been in effect since 1984. Club companies can continue to make U or square grooved clubs. The new rule, as it it currently written, calls for a club’s grooves to be straight and parallel, have a symmetrical cross section, and sides which do not converge. Also, the spacing and width of the grooves must be consistent across the face. 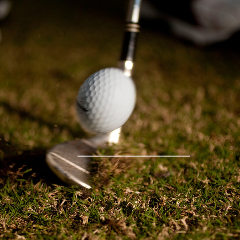 The new rule actually changes the way club faces and grooves must be manufactured in three ways:

Those are the simple facts. Though there was some late doubt, the PGA Tour has decided with finality that they would adopt the rule as they’d previously stated in August, 2008 effective 1/1/10. What does this mean to the average every day golfer and weekend hack? Not much. After all, rounds played for handicap purposes must use conforming grooves starting no sooner than 2024. About the only thing that the non-elite amateur player will notice before then is that they won’t be able to buy a “non-conforming” club after 2010. 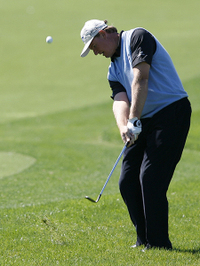 This rule is primarily targeted at professional golfers and the USGA has said that they want to re-emphasize the importance of hitting the ball in the fairway. In recent years with the changes in grooves, golf balls, driver technology, and increased distance, golf has become a game where it’s better to hit a wedge from the rough rather than an 8-iron from the fairway. The USGA simply wants players at the highest levels to return to having to judge the lies in the rough to avoid flyers, or be a bit more creative around the greens with chip shots. The USGA also believes that even a little rough will again become enough of a penalty that we don’t need to grow the rough six or eight inches or tuck pins two paces over a deep bunker.

It’s too early to say, but the rule change may prompt one or a combination of changes from PGA Tour players:

Early comments from several players indicate that these may be the case, with the first option – a softer, spinnier ball – being the primary possibility. Of course, switching balls may not be a “one and done” type of change, as Titleist is on record as pushing for a delay of the rule because they believe iterative changes to the set makeup of professional golfers will take more time than players have before January 1, 2010 (among other reasons). You can read their response to the groove rule change here.

Impact on the Rest of Us
So what will the impact on our scores be? After all, most average golfers shoot scores of 90 or higher. Will the groove change make golf tougher for these guys? How about the single digit handicapper?

Personally, I don’t think the high handicapper, the average golfer, has much to worry about. For one thing, the average golfing public doesn’t have to switch clubs until 2024 at the earliest. That gives everybody a good 15 years to get a few short game lessons. Secondly, most golfers don’t generate much spin on their shots anyway. Dave Pelz told me that three factors contribute to generating spin on a golf ball: the quality of the swing, the groove structure, and the ball itself.

A lot of average golfers get one or two out of three: they often play with Pinnacles or other firm golf balls and the quality of the strike isn’t high.

In terms of swing quality, to produce spin on a golf ball you need solid contact and a lot of clubhead speed. Most PGA Tour players swing much more aggressively and make better contact on short pitch shots and chips than amateurs. As a result, they hit the ball with more spin. Tiger and Phil have often befuddled crowds with the low flying pitch that bounces twice and stops on a dime – the average amateur doesn’t have that shot in the bag.

Where the groove structure is concerned, from the rough a U groove produces on average about twice as much spin as a V groove. From the fairway, U grooves produce about ten percent more than a V groove. It’s this factor that marks the main reason why the USGA made this ruling. A lot of average golfers will have a set of U grooves in their wedges, but one out of three won’t put a lot of spin on the ball.

Given all that, the average golfer who uses a surlyn covered ball, doesn’t produce a high amount of clubhead speed, and doesn’t hit the ball solidly most of the time will see little or no effect on his results by switching to the new grooves.

The grey area involves the single-digit golfers. They play the premium balls. They generate clubhead speed. They even hit the ball cleanly on occasion (I kid…). Suffice to say they’ll notice a change. It won’t be as dramatic as PGA Tour players, who play for millions of dollars, are accurate to within a yard or two, and who could trace their ball’s launch angle to within a degree or two with every club in the bag, but they’ll notice it. It will, as with the pros, put a little more emphasis on driving accuracy and will force players to be a bit more creative around the greens.

2010 Prediction
I’m on board with the groove rule. I think it will, as the USGA intended, put a little more emphasis on driving accuracy and will return some interest to golf. “Bomb and Gouge” may decline in popularity, and the separation between the truly great players on the PGA Tour and the so-so ones will widen. Golf will be more interesting, with tamer rough that entices players to hit the recovery shot – the most exciting in golf – a bit more often.

I predict that the PGA Tour will go easy on the players in the first few months of the 2010 season by cutting down the rough, perhaps even more than we’ve seen thus far this year. But we’ll see if that holds true – with the equipment resources available to modern tour players and the equipment companies already testing a variety of golf ball/groove combinations, the true impact may be minimal.

18 thoughts on “Here V Go Again: The Truth About the Groove Rule Change”