One of the easiest ways to give a putter a new feel and maybe a new lease on life is to change the grip. Doing so doesn’t have to be a permanent commitment if you can save the old one.

My father didn’t just teach me to play golf, he taught me to be a golfer. And in the olden days – his and mine – that meant learning some basic skills to take care of your equipment.

Golf grips are certainly one of the easiest things to work on. Regripping, building up grips, making them thinner, and swapping out putter grips are all easy tasks that can be accomplished with simple tools and a little patience.

When it comes to saving grips so they can be reused, there are three primary methods, each with their own camp of proponents. Here’s a look at the choices and a run down on the method I use and recommend…

Blow Them Off
While I’ve never done this myself, I’ve watched a couple clubmakers use this technique. It requires a tank of compressed air and a nozzle that will fit into the hole in the grip cap. Once the nozzle is positioned, a blast of air blows the grip from the tape and allows it to be removed.

From what I’ve seen, however, it’s a method used more to quickly remove and discard grips than to save them. That’s because oftentimes the grip will burst in the process. And I’m not sure how effective it would be trying to save thicker wrapped Winn or leather grips.

It’s fast, but it requires the expense of a compressor or tank of air and all the necessary fittings and so, for that reason alone, I’ve never tried it. But because of the speed and because there’s no solvent involved, some really like it… especially if they are dealing in volume work.

Give Them the Needle 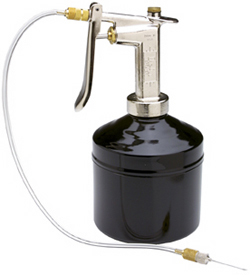 I used this system for a long time with mixed results. A canister is filled with solvent and then a large needle is inserted into the space between the grip and the shaft. Then you pump the solvent in to break the bond between grip and tape.

In my experience, you often had to insert the needle in more than one spot. If the tape bond was especially strong (as is typical with an old grip), the solvent would often spout out the hole in the grip cap. Thus, sometimes I’d wind up with solvent all over the place. Pretty messy.

I also found I had to use acetone as a solvent to make this work. And that’s a lot more volatile and nasty a solvent than mineral spirits or paint thinner. On the other hand, with its newer model, GolfWorks cautions as to the type of solvent to be used since some can dissolve the seals.

The needle holes are not that apparent after you’re done, although you can see a trace of them in smooth grips like the Ping Man putter grips. The old model I have didn’t come with the flexible hose. This meant needles routinely bent and eventually broke. More than once I came close to injecting myself instead of the grip.

Still, it works. GolfWorks sells the model pictured here (above, right) for $53.90.

Slip Slide Them Away
The first time I saw a clubmaker use this technique, I slapped my head and thought, “why didn’t I think of that?” It’s ridiculously simple, the tools are cheap, and in removing dozens of grips I’ve only lost one that I can remember. 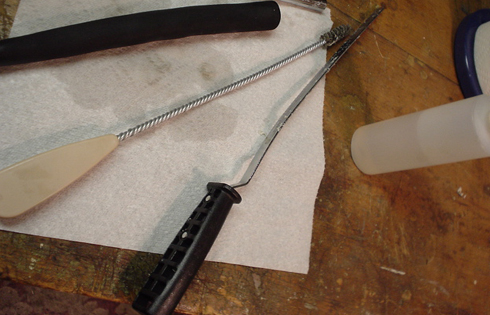 Here’s what you need: GolfWorks calls it their V-Groove Grip Remover and Golfsmith calls it a Spring-Rod Grip Remover. I also use a squeeze bottle for solvent (I use odorless paint thinner) and a Grip Bore Cleaner from Golfworks. 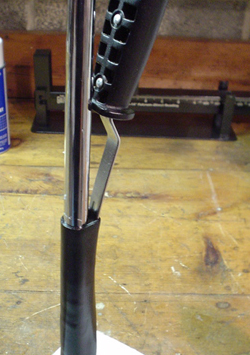 Here’s how it works: I stand the club upright on the grip and insert the tool just under the lip of the grip. Then I squeeze some solvent down the gap between the grip and shaft.

Here comes the trick: I hold the tool steady and twist the club so the tool spirals down the shaft. Stop several times to squeeze more solvent down the grip. Don’t push down hard on the tool because you could shove it right through the grip… that’s how I ruined one. The spiral action is key.

What you’re actually doing with the tool is giving the solvent access to the tape. The solvent is doing the work, the tool is just breaking the weakened bond.

Once the tool is all the way down the shaft and the grip is free (you can feel it break loose), I lay it down on the workbench, hold the tool steady and twist the club as I pull it from the grip. It’s easy if you just take your time. 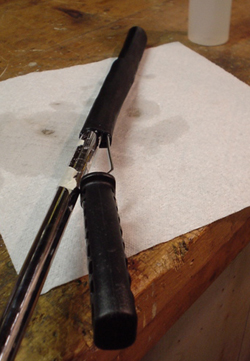 Sometimes – especially on recently gripped or new clubs – the grip will come off with no tape residue inside. But if there is some tape left in there, I use the bore cleaner to scrape it clean. A little more solvent in the grip helps this process.

That’s all there is to it. GolfWorks and Golfsmith caution it’s not for Winn or cord grips. I think they’re being overly conservative. I’ve easily removed Winn grips, cord grips, and leather wrapped grips… even that new stitch-back Scotty Cameron leather grip. The solvent I use doesn’t stain the leather.

The key to wrapped grips is to make sure you spiral the shaft in the same direction as the diagonal of the wrap so the leather or polymer doesn’t peel off the underlisting. Stiffer grips like leather and cord just require more care and patience as you spiral the tool down. Go slower and use plenty of solvent.

The GolfWorks tool is available online for $19.95. They also sell the squeeze bottle for $0.95 and the Grip Bore Cleaner for $7.95. Golfsmith, which sells their tool for $19.99, doesn’t show it in their online store, but you can see it on page 96 of their online Clubmaking Catalog.

In the End…
For me, playing around with my equipment has often resulted in a better club… especially when it comes to putters. But I’m so fickle about such things it’s a process I indulge in often. It’s not very expensive if you can re-use your grips. Give it a try. It really is fun and such skill truly makes you a complete golfer.

26 thoughts on “How to Remove and Save Grips”